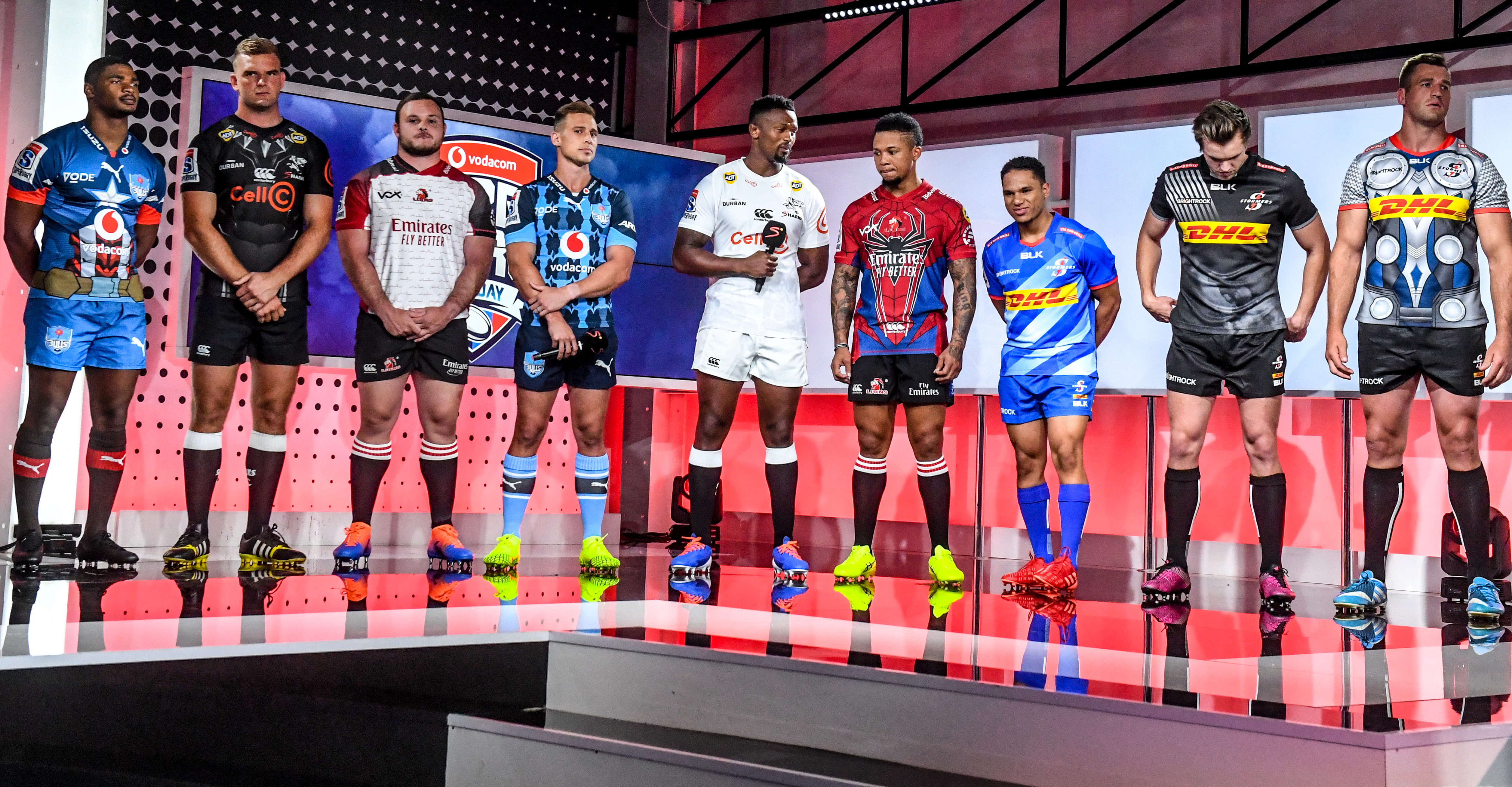 Players representing the Lions, the Bull, the Sharks and the Stormers during the Vodacom Super Rugby 2020 Season Launch at SuperSport Studios on November 28, 2019 in Johannesburg, South Africa. (Photo by Sydney Seshibedi/Gallo Images)

The 2020 Vodacom Super Rugby season was officially launched on Thursday evening, with an array of coaches and players in attendance.

“We have a new generation of rugby heroes in South Africa ready to make their mark in Vodacom Super Rugby in 2020.”

These were the words of South African Rugby Union (Saru) Mark Alexander, speaking at the 2020 Super Rugby season official launch at the SuperSport studios in Randburg on Thursday evening. The event was attended by coaches and players, with much fanfare centred on the four South African (SA) representatives’ kit for the new season, which was unveiled.

Alexander said that this Marvel initiative aimed to inject more excitement into the game in the country – riding on the Springbok post-World Cup wave – while also making sure that younger audiences are drawn in.

“People consume sport differently now, it’s a concern for us. We’ve got a big project running around fan engagement and bringing people back (to stadiums). Kids want to come there; they want to be in the game but they also want to engage with the game. So, we’re developing stuff within Saru now, to attract more people to the stadium,” said Alexander.

The South African teams had forgettable campaigns in 2019, with none of them reaching the final, or even semi-finals. The best performing teams were the Sharks and Bulls, who only managed to reach the quarter-finals, before being bundled out by the Brumbies and Hurricanes respectively.

New Sharks Super Rugby coach, Sean Everitt, is optimistic that his team, despite them being in a rebuilding phase like their South African counterparts, can do better than their indifferent form of last season.

“I think we’ve been the most successful, consistent [South African] team in Super Rugby over the years, although we haven’t won the competition. But yes, you know, we are a new team. And like everyone else, we are a young team and we are in a bit of a building phase. But I think the team that we can put out on the field is capable of achieving really, really well,” Everitt told the media.

Like all the South African teams, the Sharks have lost some key players in the build-up to the new season, either to retirement or lucrative moves overseas.

They have lost the colossal Tendai Mtawarira to retirement, while Coenie Oosthuizen, Akker van der Merwe and twins Jean-Luc and Dan du Preez are all heading to the Sale Sharks over in England.

But the Durban franchise has sought to try to cover those losses, moving to sign players such as James Venter, Madosh Tambwe, Ox Nche and Sikhumbuzo Notshe who struggled with injuries last season.

The Bulls have been hit the hardest by the exodus of the players, losing a whole host of World Cup winners. Handre Pollard is off to Montpellier in France, Jesse Kriel joins Canon Eagles of Japan, Lood de Jager has signed with Sale Sharks in England, RG Snyman is going to Honda Heat in Japan, while Duane Vermeulen is going to Japan to link up with the Kubota Spears, and veteran Schalk Brits has hung up his boots.

The Stormers and the Lions have also lost their fair share of seasoned campaigners, but Alexander is positive that the franchises losing these players will leave doors open for others to make names for themselves, notwithstanding that the overseas-based players can still play for the Springboks.

“We are concerned about the players that have left. But again, if you look at when Victor Matfield and Bakkies Botha retired, we thought: ‘What are going to do?’ Then all of a sudden there was a Lood de Jager and an Eben Etzebeth. There’s a lot of young guys coming through, and when one door closes another one opens for somebody new to come in,” said the Saru president.

“And we certainly hope that’s the case you know. We cannot keep all the players, we understand it’s a global market, people will go play abroad. But we can always call them back to continue playing for the Springboks,” he added.

A player who made his name in Super Rugby last season, despite the unsatisfactory performances of the Stormers, is Herschel Jantjies.

The World Cup winner said he was not dwelling on the exploits of his breakout season, and was instead solely focused on improving and adding renewed value to the team in this new season.

“For me it’s about hitting the reset button and then starting this new season. I want to hit the ground running come Super Rugby. I want to be consistent, and play good rugby consistently,” said Jantjies.

His namesake and seasoned campaigner with the Lions, Elton Jantjies, said he was looking forward to playing the role of leader for his team, especially the youngsters, with or without the captain’s armband.

It was also announced at the launch that all four SA franchises – playing Marvel character jerseys – will play exhibition matches on Sunday 19 January 2020 at the FNB Stadium, less than two weeks before the Super Rugby competition kicks off.

On that day, dubbed Superhero Sunday, the Sharks and Stormers will start the action at 1pm, followed by the match between the Vodacom Bulls and Lions at 3.15pm. DM