‘We are poor and landless, not land-grab syndicates’ 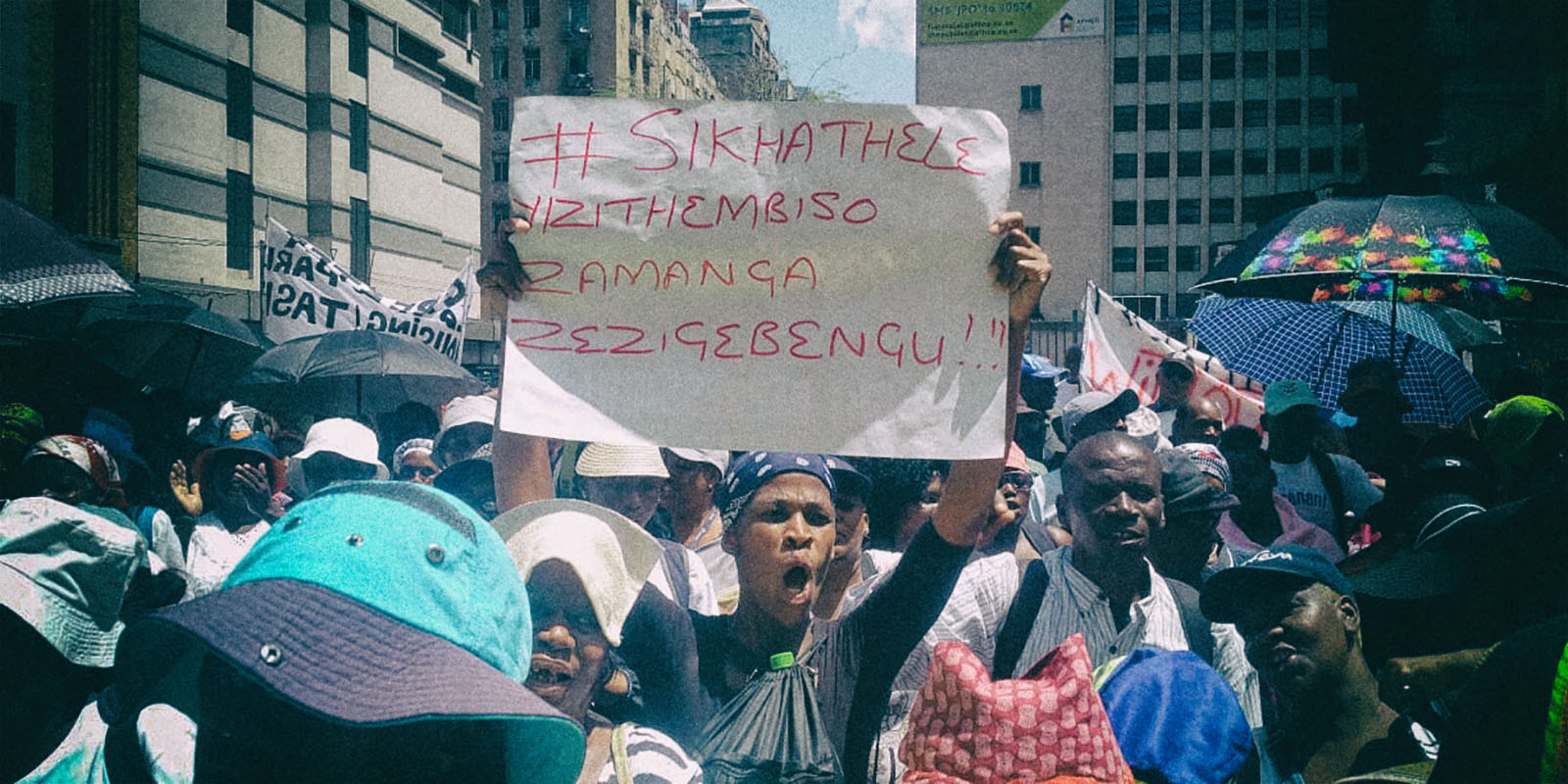 Members of the landless community in Johannesburg hold a protest outside the Johannesburg High Court before their hearing begins. Poor and landless communities in the south of Johannesburg have warned the Gauteng provincial government to implement promised land release programmes or face land invasions in the near future, 27 November 2019. (Photo: Bheki Simelane)

Johannesburg’s landless communities gathered at the High Court to fight off a blanket land court order that has been haunting desperate communities for years.

Nine of Johannesburg’s landless communities were at the Johannesburg High Court on Tuesday 26 November to hear an interdict brought against them by the Gauteng government. The communities reacted angrily to remarks by the province that they were land-grab syndicates and said they were just poor and neglected communities.

The nine communities, including Meadowlands, Naledi, Diepkloof, Pimville, Alexandra, Eldorado Park, Freedom Park and Lenasia, told Daily Maverick they have no intention of backing down in their intention to occupy the land in question. The communities were in court to fight a blanket court order obtained against them by the Gauteng provincial government after the communities took a decision to occupy tracts of land known as Southern Farms.

The matter was postponed to 10 February 2020 after the court concluded that it was no longer urgent. The court had said the matter was urgent when the first order was obtained against the communities on 1 November.

The communities expressed their anger and frustration at the postponement, and they marched to Gauteng Premier David Makhura’s office to demand that he fulfil the promise he made to the communities in 2017 at the Eldorado Park Stadium. The communities told Daily Maverick that Makhura promised a roll-out of the rapid land reform programme.

“We decided to march to the Gauteng legislature to demand the premier fulfil the promise he made to our people,” Thami Hukwe, who is named as one of the respondents in the court order, said.

Makhura was not in his office but MEC Tasneem Motara accepted the memorandum of demands on his behalf. The communities gave Makhura seven working days within which to respond. In the memorandum was also a demand to meet President Cyril Ramaphosa.

“As we were discussing how we were going to get around the issue without a fight or rubber bullets, the government decided to go ahead and obtained a blanket court order against us. We will fight the order in the courts, in the streets, whichever way we can,” said Hukwe.

“We will go to the highest court to stop land being given to the tenderpreneurs and so-called investors to make quick cash out of the struggle of the people. We will even go to the extent of asking Chief Justice Mogoeng Mogoeng to be louder in his speech when he said it is embarrassing for this government that 25 years into democracy, people are still homeless,” Hukwe said.

Sandile Seth Mazibuko also represents the communities, after other leaders were slapped with the blanket court order and cited as respondents. Mazibuko said: “We are again warning that there shall be no developer or consultant allowed in the Southern Farms without the consent of the communities that have been engaging the government and without the involvement of the majority of the people.”

Mary Ngenza, 72, from Diepkloof said: “My mother’s house was taken, we were moved from Alexandra to Diepkloof where we were given houses. I was 15 years old at the time. The councillor took my mother’s house and sold it. My son registered for a house in 1996 but nothing happened since. We want to help to get our parents’ houses and our children’s houses so that we can die in peace.”

Keith Duarte, 52, from Eldorado Park, who represented the Indigenous Korana house under leader Glen Taaibosch, said: “We are here because we have been indicted by the court, they say our occupation of Southern Farms is illegal. This regime called the leadership to a meeting and Southern Farms was presented to us by the government as land that could be used by the 38,714 still waiting for houses. We are saying unapologetically that we have family fighting over houses. The city has embarked on issuing title deeds. [Former mayor Herman] Mashaba threw me out of the meeting when I said he cannot dish out title deeds before educating our people first, look now… we are fighting over no houses.”

Ngenza said: “We have an official human rights report that the department is violating [our rights] by its continued neglect of our land concerns. The human rights report said the key issues in areas such as Eldorado Park is houses. We are saying, give us the land so that we build for ourselves.”

The representatives of the communities said in a joint statement that “AfriForum wants to come on board, so we will be trying to solve this legally.”

The communities said if it becomes impossible to solve the matter legally, they will have to sit in as they had resorted to doing before the provincial government slapped them with the blanket court order.

“Yes, development will be obstructed because they have appointed consultants without us. We are saying nothing for us, without us… we are going to dictate to the provincial government. Those consultants must be stopped. We will redo the whole process,” Duarte said.

Duarte said: “There is an interdict against us, we want to occupy the Southern Farms land. We were promised that land by Paul Mashatile in 2017. Then, early this month when we had just met Gauteng Premier David Makhura, we were shocked to be slapped with an interdict despite amicable engagements. We want Southern Farms because that is the land that we have been promised.

“It’s disappointing that 25 years into democracy we still have pensioners as backyard tenants. We have serious problems. Some of these elders have passed on while still waiting for their RDP houses, so we don’t even know what to do with them when they die since they don’t have their own places.”

Lehlohonolo Makhele, a 28-year-old leader from Freedom Park said, “We are hoping for the interdict to be rescinded, or that we are allowed to occupy the land. Chief Justice Mogoeng Mogoeng has also said it’s not right that 25 years after democracy people were still excluded.”

Rookia Hoosein, 59, from Eldorado Park said: “I have been staying in Eldorado Park my whole life. In 1994 I applied for an RDP house but nothing happened. They have been saying that I’ll be first on the list, but clearly that wasn’t true. If they can release Southern Farms and allocate stands, that would be great because we have been waiting for a long time.

“Staying in a shack with my old children hasn’t been nice. The shack leaks water when it’s raining and the children have to go outside when I’m bathing. It’s not normal. Next year I’ll be a pensioner, and I guarantee you, nothing will have changed.”

Responding to the Gauteng Department’s assertion that the people who were occupying the government’s land were syndicates, many community members reacted furiously, and told Daily Maverick outside court that this was just the government’s plan to prolong its allegedly corrupt practices.

“They are unfair because they promised us before the elections, but after we voted nothing happened,” Hoosein said.

Gugulethu Vezi, 37, from Freedom Park said, “My family is overcrowded. We all stay in one room. I registered for an RDP house in 2002 but nothing happened. They will tell you they will call you, but they never do. So I turned to these comrades with the hope that their efforts might pay off in the end.”

Duarte also reacted angrily to the government’s statement that the communities were land-grab syndicates: “They are lying, they promised us the land in Southern Farms. We have proof that the land was promised to us. It’s simply not true that we are syndicates, we are desperate South Africans looking for equal opportunities, but soon we will show our true colours.”

The province has yet to respond to a request for comment. DM