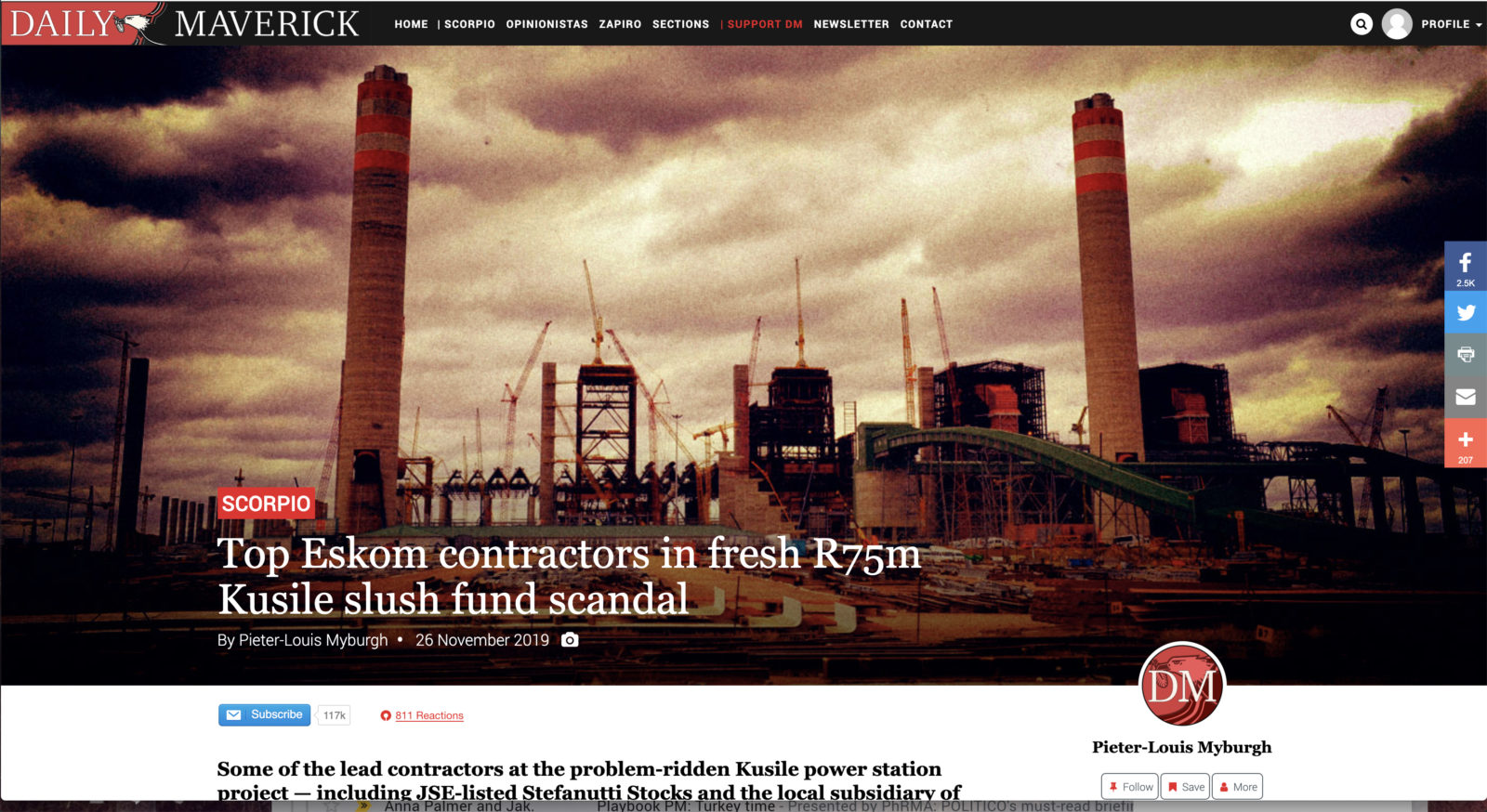 Shares in JSE-listed construction group Stefanutti Stocks tanked more than 40% on Wednesday after a Scorpio exposé revealed how it and the local subsidiary of multinational Tenova TAKRAF made big payments to an apparent slush fund used to enrich top Eskom officials.

Like most of South Africa’s construction sector, JSE-listed Stefanutti Stocks has been under pressure in the face of a sour economy and low levels of investment and demand.

Its fortunes have now taken a decided turn for the worse with its share price sliding more than 40% on Wednesday 27 November, making it the bourse’s biggest decliner on the day, in the wake of revelations by Scorpio, a sister publication of the Business Maverick. Stefanutti Stocks are now down about 97% over the past 12 months.

While the company’s share price has been in a steady state of decline, it seems improbable that the Scorpio story and Stefanutti’s share performance on Wednesday are unrelated, given investor concerns about corporate governance and the wider public backlash in South Africa about the unfolding and sordid saga known as State Capture.

The Scorpio story outlined how Stefanuti Stocks and three other companies collectively paid R75-million to a little-known company, Babinatlou Business Services, whose bank account was used as a slush fund for top officials at state-run power utility Eskom.

“After receiving payments from the contractors, Babinatlou channelled at least R50-million towards then Kusile contracts manager France Hlakudi and two of his former Eskom colleagues. Hlakudi was by far the biggest beneficiary of the monies that exited the Babinatlou account,” the report said.

“Scorpio has seen documents submitted to the Hawks and the SIU that detail how Babinatlou distributed its payments from the Eskom contractors to the benefit of Hlakudi and former Kusile officials Mildred Nyoka and Dianah Motlou. All three officials have since left Eskom amid ongoing probes into their dealings with contractors at Kusile,” it said.

Stefanutti Stocks said it was not aware of the alleged shenanigans, and that it had evidence that the R2-million it paid Babinatlou went toward upgrades at a Limpopo school.

“Insofar as Stefanutti Stocks has been able to ascertain, the monies it paid were utilised for their intended purpose,” the company said.

However, Scorpio revealed that “at least a portion of the R2-million from Stefanutti Stocks ended up benefiting the Eskom officials. Documents relating to the matter also suggest the supposed school project in fact never materialised.” BM

Fighting corruption is crucial to growth in South Africa