A legend of liberty lays down his sword

A legend of liberty lays down his sword

Donald Gordon has passed away at the age of 89 after a long illness. He was the founder of Liberty Life, the builder of Sandton City, the funder of both Gibs Business School and the Donald Gordon Medical Centre, but he was also a loving father, a patron of the arts and he was knighted by the Queen of England. It is in the many facets of his achievements that he leaves behind a legacy so substantial, which most will find impossible to imitate.

Many years ago, Sir Donald Gordon, who was 26 at the time, drew up what was considered a radical proposal to form a new life insurance company. It had been a dream of his to start such an operation since qualifying as a chartered accountant in 1953.

It took nine months of disappointment, frustration and rejection to raise the GBP50,000 needed to fund his venture, but by August 1958, Liberty Life was registered as a South African company and two months later, Gordon successfully sold his first life policy.

He was a pioneer of financial innovation. His company introduced the first retirement annuity products to the country in 1960. Liberty Life rolled out South Africa’s first unit trust in 1965 as well as the concept of life insurance benefits linked to these collective investment schemes.

Liberty Life was also the first life insurance company to list on the JSE in 1962 with a share price of R2.20. Investors who bought into the dream with 1,000 shares at the time would have increased their wealth from R2,200 to R113,000 today, not taking into account dividends and the many companies hived off over the years.

By 1967, the company had over R10-million of assets under management, according to the Liberty Holdings website.

Russell Loubser, former chief executive of the JSE, says the country has lost a giant. He says he was lucky enough to have met such a legend, but the country was even luckier to have him. “To have been privy to a business being built up from scratch through hard work and endurance, and not by chance or ill means, was a privilege,” says Loubser. “We don’t always appreciate what it takes to do that and the fact that he was able to continue to successfully run that business for many years is a formidable feat.”

But Loubser says Gordon leaves behind a much bigger legacy than just a fantastic company, referring specifically to the Wits Donald Gordon Medical Centre in Parktown – founded in 2002 – and the University of Pretoria’s internationally accredited business school, Gibs, which is based in Sandton and was launched in 2000.

Both institutions recognise Gordon’s contribution and his significant endowments on their respective websites.

“I was fortunate to know him,” says Loubser. “He was a kind person and a good person to know.”

Getting back to the basics of the original business, in his book Larger than Life: Donald Gordon and the Liberty Life story, Ken Romain relates a remarkable success story from a tentative start in the Fifties to 1989, where Liberty Life bestrode the South African economy and the local financial services sector as one of the giants and entered London – the birthplace of the life insurance industry – with a vengeance.

Celebrating its 21st year in business in 1978, Liberty had already launched its asset management division and the Donald Gordon Foundation to manage its social responsibility commitments. It had acquired the Real Estate Corporation and a majority stake in Clydesdale (Transvaal) Collieries and formed the Liberty Controlling Corporation with Standard Bank Investment Corporation (STANBIC). Its assets under management exceeded R100-million by then.

Gordon – Donnie to his friends – also built what would become one of the most successful and innovative buildings in the world, a place that would set the standard for shopping, Sandton City in 1973.

Since the success of Sandton City and Liberty Life, in the decade that followed, Donnie took his ideas to the UK, through Transatlantic and Capital & Counties, and started Liberty International, which listed on the London Stock Exchange in the early Nineties.

He founded the Liberty Life Association of Africa in 1957, out of which he formed Transatlantic Insurance Holdings, which became Liberty International in 1980. Listing in 1982, Liberty Life had R2-billion in assets under management.

During the Eighties, Liberty Life increased its stake in Standard Bank to 21% and became the largest shareholder in STANBIC.

By 1992, Liberty life was ranked the fifth largest company in South Africa in terms of market capitalisation.

The founder and chairman of Liberty Holdings retired from active duty in 1999, a year after Liberty Life Properties started construction on the R350-million Sandton Convention Centre project.

Gordon subsequently moved abroad to focus on his property portfolio.

In 2004, Gordon donated £20-million  to the Royal Opera House and the Wales Millennium Centre Wales, which is believed to be one of the  single largest private donations ever made to the arts in the UK..

A year later he was bestowed a knighthood in recognition of his services to the arts and business in the country.

Jacko Maree, former CEO of Standard Bank says he worked very closely Gordon at the bank and when Gordon family had a 50/50% partnership in Stanbic between 1978-1999. ” He commanded the room as soon as he entered it,” he says. “ He was super smart, had strong views on a number of diverse topics, and could be even somewhat intimidating at times.”

As a leader, he says that Donnie had the ability to see the bigger picture, but not take his eye of the detail, painfully so. “Very few people are masters of both,” he adds.

” Gordon is probably one of the top entrepreneurs South Africa has, and  will ever produce”.

Liberty was not prepared to further comment on the passing of their former leader apart from an official statement released on November 22 2019. It read that they were “saddened by the passing of Sir Donald Gordon… [who] was a visionary leader, entrepreneur and philanthropist who made an immense contribution to our industry and country … He founded Liberty on principles born of a deep belief in humanity and the desire to help people to leave a legacy for their families. Liberty will continue to honour his vision by pursuing our purpose of improving people’s lives by making their financial freedom possible.”

Business Maverick was unable to reach Gordon’s daughter ,Wendy Applebaum, but her husband, Hylton made the following statement on a Facebook page: 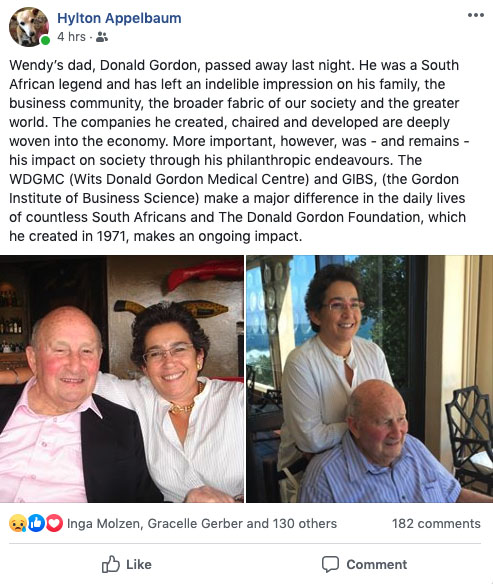 He will be missed. BM