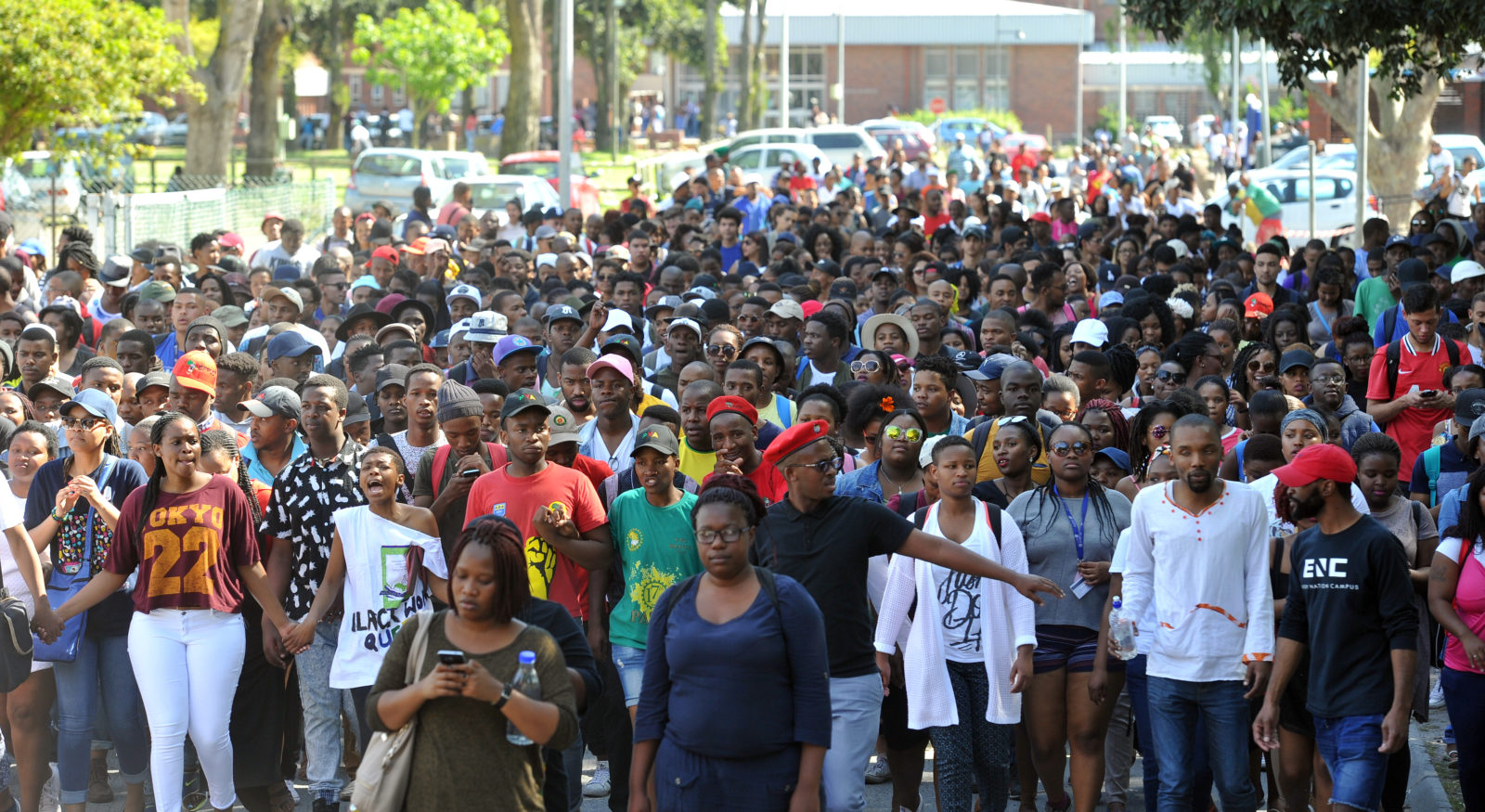 University of the Western Cape students march during a #FeesMustFall protest in 2016 in Belville. (Photo by Lulama Zenzile / Foto24 / Gallo Images / Getty Images)

It has been 900 days since 143 workers were dismissed from the University of the Western Cape after the #FeesMustFall protests. Now a new documentary seeks to highlight their plight and the obstacles they have faced.

So much can happen in 900 days. Presidents can be removed from office and new ones installed. Regimes can change across the world. Economic crises can cripple livelihood strategies for the working class when coupled with large-scale exposés of endemic corruption. Protests erupt, tires burn and people become casualties in the crossfire of bullets.

Caught in the ebbs and flows of a rapidly changing socioeconomic climate are those such as the 143 workers dismissed from the University of the Western Cape (UWC), who have been worst affected by the #FeesMustFall and #EndOutsourcing protests. Dismissed on 13 January 2017, these 143 workers have been campaigning for justice for three years and have watched in dismay as workers have been insourced at some universities, or at a minimum granted amnesty for participating in strike action under calls from students involved in #FeesMustFall protests.

Most striking in their case are the gaps in truth surrounding their dismissal: of the 143 workers dismissed for “participating in unauthorised strike action”, some were on annual leave, well within their rights. Still, others were accused of holding their employer hostage – with video footage suggesting otherwise. Even more dismaying is that amid all the protest action by outsourced workers at UWC (numbering in their hundreds), it is only the 143 workers employed by private security company Securitas that were dismissed. All other workers returned to their posts without trial. The silence on their situation has been especially discouraging for the 143, who were main breadwinners, single parents and now unable to find work.

The #EndOutsourcing protests are situated in a long history of outsourcing at South Africa’s universities. Much like for their counterparts, workers at UWC experienced the brunt of the commodification of higher education, with reports suggesting that they were often subject to unjust working conditions. This included being required to pay for substitutes when they took leave, having to pay for the cost of their protective gear (often inadequate and in violation of the Basic Conditions of Employment Act), and subject to the employment vulnerability that comes with outsourcing and casualisation.

On 3 October 2016, UWC students called for a shutdown of the university until their demands, including for insourcing of workers and the end of university fees, were met. The shutdown was student-led and deemed necessary to force university officials to urgently respond to workers, following a history of lack of transparency. The intention of the shutdown was to end the situation facing workers and students: where racism, alienation and economic vulnerability had become the norm.

On that day in October, the workers were asked to leave the premises, as were all the other outsourced workers, because of the shutdown. When employers requested that essential services return to work, including security staff, UWC restricted entry for all staff members, including outsourced workers, who were advised not to go to campus and were denied access for safety reasons. And yet, it is under these conditions that Securitas dismissed its 143 workers stationed at UWC.

Following the protests, the battle for transparency and justice has continued in the face of false allegations from the university and Securitas. University management in early January 2017 took protesting workers to the Labour Court with allegations that they had absconded from work. The workers successfully won the case with the finding that the workers were not absent from work, but in fact were denied entry because of the shutdown. Despite this ruling in their favour, workers were subjected to an unfair internal process that would ultimately result in their dismissal.

Soon after the court ruling, Securitas embarked on an internal hearing with no consultation with workers on fair and independent chairs for this meeting. In this hearing, charges were replaced from those originally ruled to be in favour of the workers in the legal process. For example, allegations of absconding from work during the protest were escalated in the internal hearing to accusations of taking Securitas management hostage. Following this internal hearing and these new charges, more than 143 workers were found guilty and were immediately dismissed on 13 January 2017. With these new allegations, attempted arbitration at the Commission for Conciliation, Mediation and Arbitration (CCMA) found in favour of Securitas in February 2018.

Since 2018, workers have been seeking legal representation from leading civil society litigation organisations in South Africa, to no avail. The lack of resources and pro bono support ultimately resulted in the workers having to wait a year to challenge the CCMA ruling – now unlikely to be successful given the time that has passed.

Renewed attempts to seek justice for the workers has revealed that not only did the university and Securitas engage with them in bad faith, but also highlights how the country’s legal system does not support workers with no access to legal representation, resources or public sympathy to support an investigation into the peculiar circumstances surrounding their case.

The lack of media attention on this case and the flurry of questions surrounding the actions of Securitas and UWC point to the ways in which the working class continues to be easily dispensable in post-apartheid South Africa. A new documentary by Wandile Kasibe and Lundi Mazizi, #Justice4UWCExWorkers, points to these fractures and how quickly dashed the aspirations for dignified work by the predominantly black working class are.

The documentary collates the stories of the 143 workers, pleading with the viewer to go on a journey into understanding the inhumane working conditions and precariousness facing the South African outsourced worker. It attempts to highlight how workers, when peacefully protesting in 2016, were penalised for exercising their right to assemble. Moreover, it demonstrates the injustice of their dismissal against the backdrop of only one company choosing not to reinstate its workers: Securitas.

Some might not know their names, but we ought to. They represent the systemic exclusion and erasure of the working class in South Africa.

As worker protests in South Africa surge, it is worth asking how true our democracy is to its Constitution if another 900 days pass without clear answers from Securitas and the university. Unfortunately, we cannot in good conscience continue in anticipation while the workers wait in poverty for an outcome. DM

The documentary #Justice4UWCExWorkers screens at a consultation with the South African Human Rights Commission on 19 November 2019 at CIVICUS Head Office.

Lundi Mazizi is the co-ordinator of the UWC Ex-Workers Movement and Masana Ndinga-Kanga is the Crisis Response Fund Lead at Civicus.