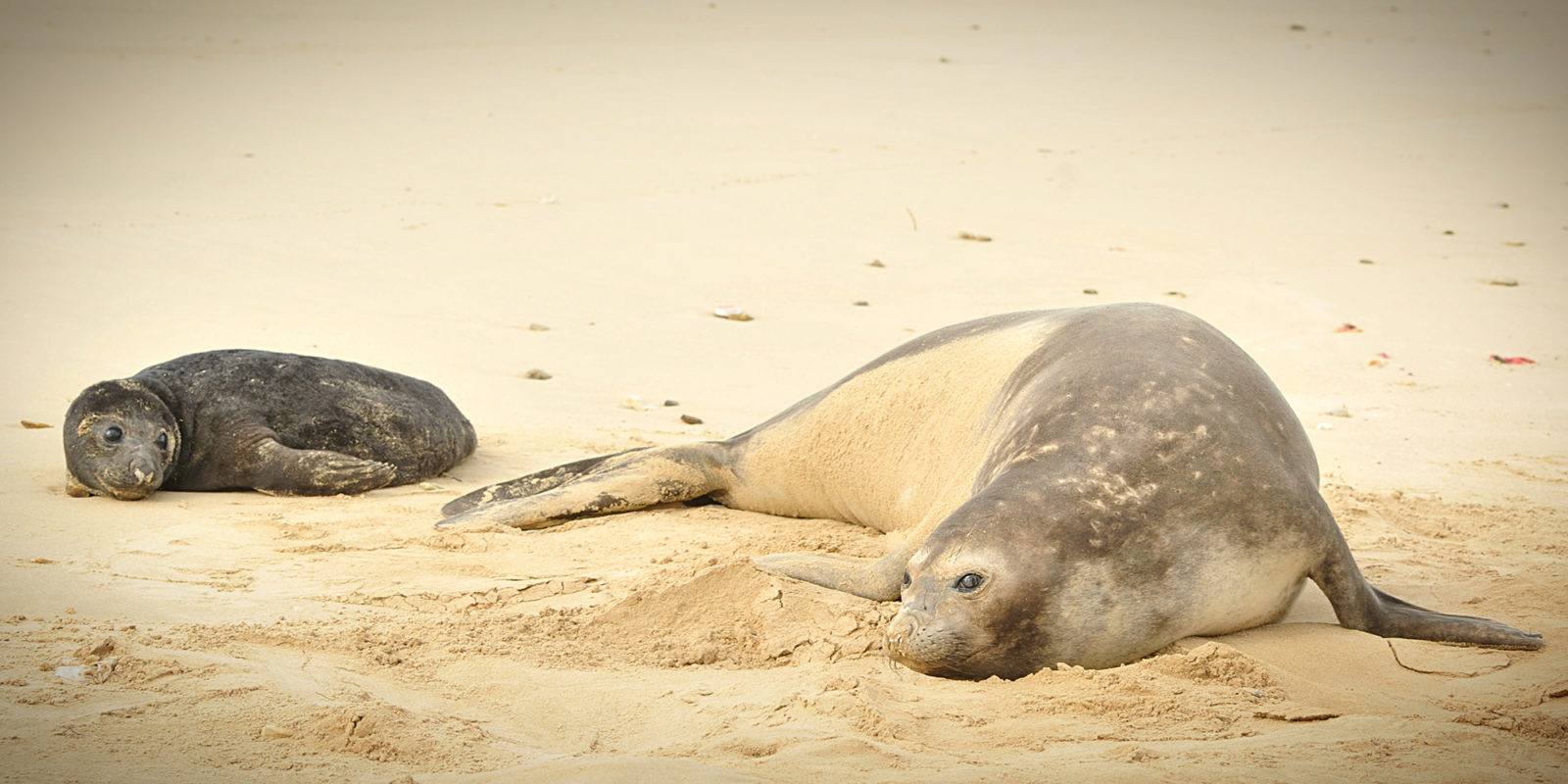 Ziggy and Zelda on the beach at Cape Recife. (Photo: Mike Holmes)

After giving birth to her pup on a Port Elizabeth beach, the first time since the 1950s that this has happened, a 600kg elephant seal dubbed Zelda left this week, presumably for colder seas. She left behind her pup, Ziggy, who will be looked after by the same volunteer rescuers who guarded them 24 hours a day when the pregnant Zelda first stranded and delivered the pup.

On Wednesday morning a team of marine experts set off on a special baby mission at Cape Recife on the Port Elizabeth coast. Their mission: to capture Ziggy, a 150kg baby elephant seal born near the lighthouse on the beach three weeks ago.

It was the end of a remarkable rescue and safekeeping project involving 25 volunteers who guarded mom, Zelda and pup Ziggy 24 hours a day.

On October 23, the mother elephant seal stranded along the Port Elizabeth coastline where she delivered a pup.

Called to the scene was the regional co-ordinator of the Stranding Network for the Southern and Eastern Cape and a marine biologist at Bayworld Oceanarium Dr Greg Hofmeyr. He said the event was highly unusual. The last time an elephant seal gave birth along the South African coast was in 1950 and it had happened only three times before.

Hofmeyr said the pup had to be rescued as the incoming tide was swamping him and he couldn’t yet swim. Dubbed Ziggy by his rescuers, the then 60kg baby was carried on a stretcher for 4km while his mom swam along in the surf.

For the next 21 days a group of conservation volunteers stayed with the pair for 24 hours a day protecting them as they spent their time in rock pools and on the beach as Ziggy tripled in weight.

Hofmeyr said they don’t know why Zelda, who weighs between 500kg and 600kg, came to the South African coast to have her pup.

“She might have been lost. What we do know is that she is not a young animal anymore. I don’t think she is a first-time mom. Maybe it is age-related or a random event? It might even be climate change. We simply can’t tell,” he said.

Hofmeyr said sightings of elephant seals along the Eastern Cape coast was not that rare.

“We do find a few young ones on the South African coast at times. That is when they are in an exploratory phase of their lives. An older animal should be more set in her ways… It is not really her environment,” he said.

He said female elephant seals usually come ashore between August and November to give birth to their pups.

“The mother looks after the pup for three weeks,” he said. “After 21 days of suckling on the mother the pup would have tripled or quadrupled in size,” Hofmeyr said, explaining that the elephant seal’s milk is 50% fat.

“During this time the mother will defend her pup with her life, but at the end of three weeks something triggers inside her. It is over and she leaves,” he said.

He said at 8am on Tuesday exactly three weeks after Ziggy was born, Zelda went into the surf, looked back to her pup and swam away.

“He still barked once or twice,” Hofmeyr said. “Then he turned over on his back and went back to sleep.”

While they have no idea why she came to the Eastern Cape coast to have her pup, Hofmeyr said they know where she is going — 2,000km away to the icy Southern Ocean. “She will be going back home. Elephant seals spend most of their time in deep water where it is cold and dark.”

He said normally, the pups will lie on the beach for another two or three weeks and then start foraging for themselves.

“We could not have left him on the beach because it was not sustainable to guard him for another three weeks. When the pup goes to sea for the first time, many of them will land up at other beaches. We would not have been able to protect him if he went to another beach,” Hofmeyr said.

“These pups are very vulnerable. We decided that we couldn’t leave him there. He was captured in a special net and brought to Bayworld where Hofmeyr said they would fatten him up for his first trip home.

“We also want to fit a satellite tracker to him so we can study his movements,” he said.

They are not intending to keep Ziggy for very long.

“When he is ready we will take him 40 nautical miles offshore. There, the current will carry him to where he should go,” he said.

Hofmeyr said there was a chance that Zelda might strand again on a local beach before she finally returns home and asked for any sightings to be reported to the stranding hotline on 071-724-2122. MC