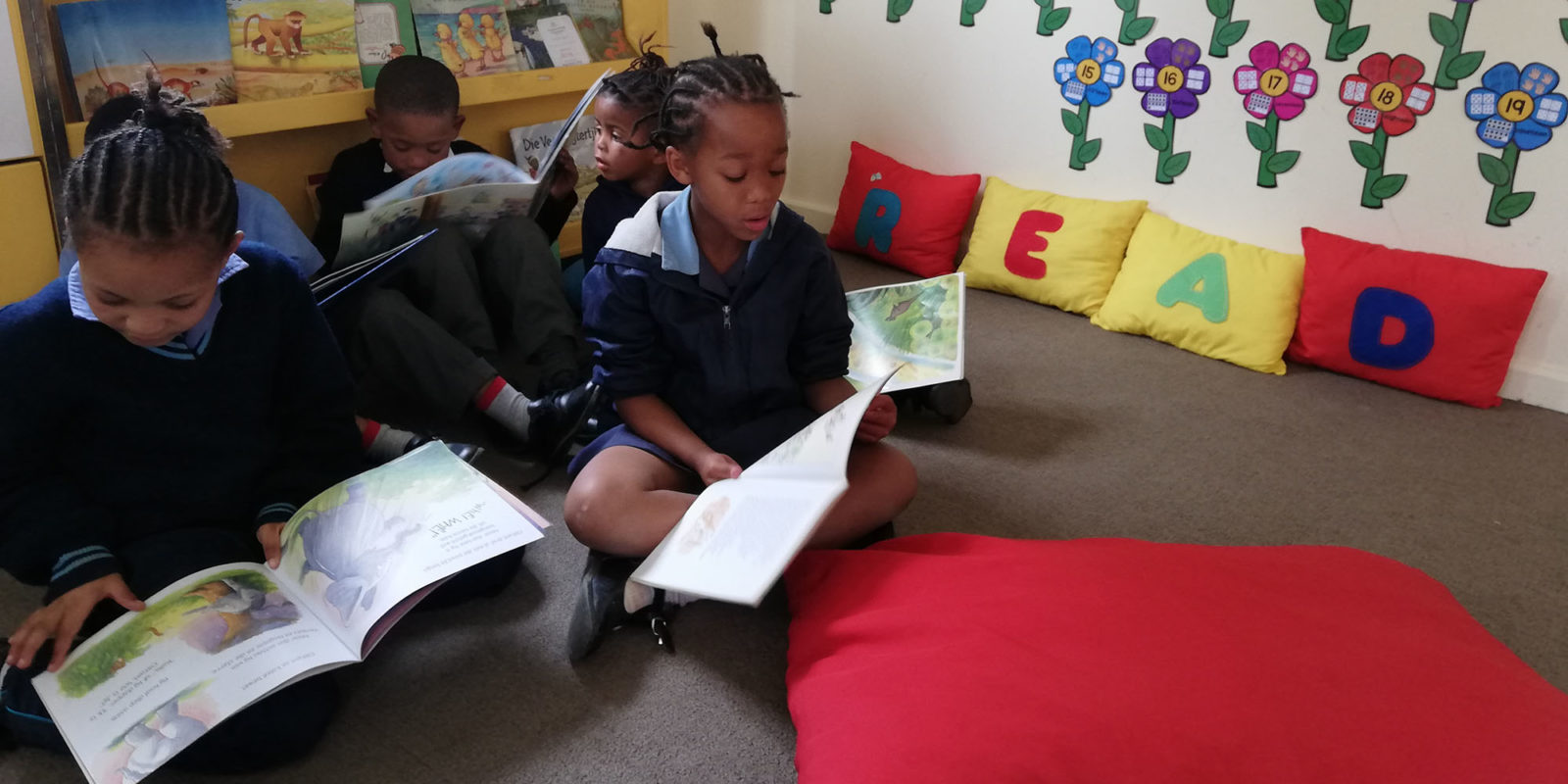 Learners that are part of the After-care Enrichment Programme at the Lebone Centre, choose from a number of selected book that are on the shelves of the Centre’s own Classroom Library (Photo: Kajal Premnath)

Simple, cost-effective classroom libraries are popping up in primary schools across Makhanda (Grahamstown), courtesy of an innovative NPO, the Lebone Centre. Now Foundation Phase teachers are able to choose multilingual books and resources tailored to suit the needs of each classroom. In addition, children are now regularly reading bright, multilingual, culturally-appropriate books in small classroom reading groups. And, for the first time, they are able to take the books home.

The faint buzzing of voices spills out of the windows and doors lining the long corridor at George Dickerson Primary School. The 38 learners in Erika Pharo’s Grade 3 classroom eagerly jump out of their miniature chairs, each banging the back of the one behind them, to sing “Good morning teachers” to us, their unexpected guests. Once the rush of excitement fades, they return, elbow to elbow, to practising their cursive handwriting skills on the worksheets in front of them.

The warm day seems to be like any other 8am to 2pm school day at George Dickerson Primary. Except today is charged with an atmosphere of hopeful anticipation – the Lebone Centre people are here, and they are putting libraries in three of the Foundation Phase classrooms.

Established by the Lebone Centre in 2014, the Classroom Library project is a six-year-long initiative which has so far set up 37 classroom libraries in five Makhanda primary schools. It drew its inspiration from the Western Cape-based Shine Literacy Project which aims to tackle similar literacy issues.

The Lebone Centre is focused on supporting children on their journey towards reading for meaning by the end of Grade 3. The programme is largely driven by the centre’s veteran literacy activist, Cathy Gush, and Classroom Library Facilitator, Tracy Probert, who is also a Linguistics lecturer at Rhodes University.

Probert has been a part of the initiative for three years. Her research interests lie in Foundation Phase literacy, particularly in African languages. For Probert, classroom libraries provide a safe space for learners to access multilingual and culturally appropriate materials.

“The learners need something that they can identify with… where they can put themselves in the characters’ shoes. It’s all about making the stories accessible, understandable, relatable, and instilling that reading identity.”

Currently, the project provides books in English, Afrikaans and isiXhosa.

The extent of South Africa’s reading crisis was laid bare by the 2016 Progress in International Reading Literacy (PIRLS) study: Almost 80% of South African learners in their fourth year of primary school could not read for meaning. The study, which takes place every five years and measures learners’ reading comprehension, noted that South Africa ranked last out of the 50 countries who took part in the study.

Early education is instrumental in a child’s cognitive and emotional development. According to the Committee on the Science of Children Birth to Age 8, “The oral language and vocabulary children learn through interactions with parents, siblings, caregivers, and educators provide the foundation for later literacy and learning across all subject areas. Children benefit from extensive opportunities to listen to and use complex spoken language.”

Thus, the act of reading, silently and out loud in classrooms, and taking books home to caregivers, provides learners with the opportunity to practise both the written and spoken word.

Makkie Hillier, a Grade R teacher at Good Shepherd Primary School, had her classroom library installed in 2018. All the Foundation Phase classrooms at the school have one. She previously had a crowded reading nook consisting of formal readers stacked up on top of one another, with ageing worksheets and second-hand books that had not been opened in months.

This is still the reality for Pharo, who is about to have her classroom library installed. “I am looking forward to the children developing their love for reading and to speak and read fluently,” Pharo says.

Parent involvement is key in the project’s success. An article by the Education Resources Information Centre states, “Parental involvement provides an important opportunity for schools to enrich current school programmes by bringing parents into the educational process.”

Vuyiswa Mbete, a Grade 1 teacher at Samuel Ntsiko Primary School who also had her classroom library installed in 2018, highlights how South Africa’s poverty crisis exacerbates this lack of parental involvement. She notes that parents are understandably prioritising work in their daily lives in order to provide for their children. However, this takes away from their participation in their children’s education. Hillier says that taking books home is “a wonderful way to get the parents involved… and that is what it’s all about. We want the parents to be involved.”

Gush, who has been in the industry for over 30 years, asserts that classroom libraries are far more successful at establishing a direct interaction between children and books than school libraries, due to the costs and resources involved in running a fully functioning school library.

“School libraries are largely very inaccessible. They often are behind lock and key because if you haven’t got a school librarian or someone who looks after it – it stays there and no one opens the library, no one facilitates the access. Whereas with classroom libraries the access is so immediate. It’s in their space, they can go and sit there and read when they finish their work and the teacher can incorporate it into their teaching.”

The Classroom Library project has seen much success in early childhood development. Mandisa Peters, a Grade 2 teacher from Tantyi Primary School in Makhanda, whose classroom library was installed in 2017 says: “There has been an improvement in the way the children read and engage with books because, even if they can’t read, they have learnt to retell the stories through the pictures. The children are also free to speak out loud and we encourage them to speak even if he/she does not fully understand the content of the book, in order to develop their language skills.”

Mbete has noticed a large improvement in her learners’ vocabulary since the instillation of her classroom library. She explains: “It [the classroom library] helps a lot because there are so many new words that they [learners] are being introduced to. Often the children come up to me and ask what certain words from the books mean, and this has really helped improve their vocabulary.”

According to Equal Education’s research, in order to equip all ordinary public schools in South Africa with a functioning school library, the government would have to fork out around R10.25-billion, with a continuous annual cost of between R1.19-billion and R2.67-billion, depending on the level of qualification. This excludes salary costs, which according to EE, would take up a further 1%-2% of the annual education budget.

This Classroom Library project is funded by the Vestas Empowerment Trust which is a public benefit trust set up by Vestas Southern Africa (Pty) Ltd (VSA), a corporate company operating in the wind energy sector under the South African Department of Energy. The trust’s goal is to improve primary school education outcomes in the Makhanda area in the Eastern Cape.

The Lebone Centre budgets around R12,000 to set up a fully functioning classroom library. This covers the cost of learning resources (books, book bags, puzzles, etc.), shelving, cushions and carpeting for the book corner. An additional R7,000 per classroom is required to train teachers through a series of four workshops and for the overall management of the project. A further element of partnership is added through the hundreds of books for the classroom libraries that are covered by pupils from Kingswood College, with whom the Lebone Centre has a close working relationship.

The Department of Basic Education’s 2019/20 budget allocation is currently sitting at R24.5-billion. Viwe Pikoli, a Senior Education Specialist for the DBE’s Education Library Information Systems in Makhanda, explains that the DBE’s policy starts with classroom libraries and then moves towards school libraries: “I think the [DBE’s] first priority is a classroom library.”

However, she goes on to explain that it is ultimately up to the schools to create their own classroom libraries with a portion of the budget they are given from the DBE: “They [the schools] should take 10% of the LTSM [learning and teaching support material] budget or 10% of the offered budget and buy reading material, although it does not happen like that. It just depends on the school really.”

Next year, 2020, is the initiative’s last year as part of the current funding cycle. However, Gush hopes for additional funding in order to further strengthen and maintain already established classroom libraries and to possibly introduce the initiative into Grade 4 classrooms in Makhanda. DM

Kajal Premnath is a 20-year-old Journalism and English student at Rhodes University. She enjoys learning about people and food; and she sometimes writes about them too. She has written for Grocott’s Mail and the Daily Dispatch.

Josi-Fay Salvadori is a freelance writer from Rhodes University where she is currently completing a degree in Journalism and English Literature. She writes about a range of topics from travel and lifestyle pieces, to education and most recently, community-based articles which have ultimately inspired her developing passion for constructive journalism.