Work sorted, personal life needs attention (like so many of us) 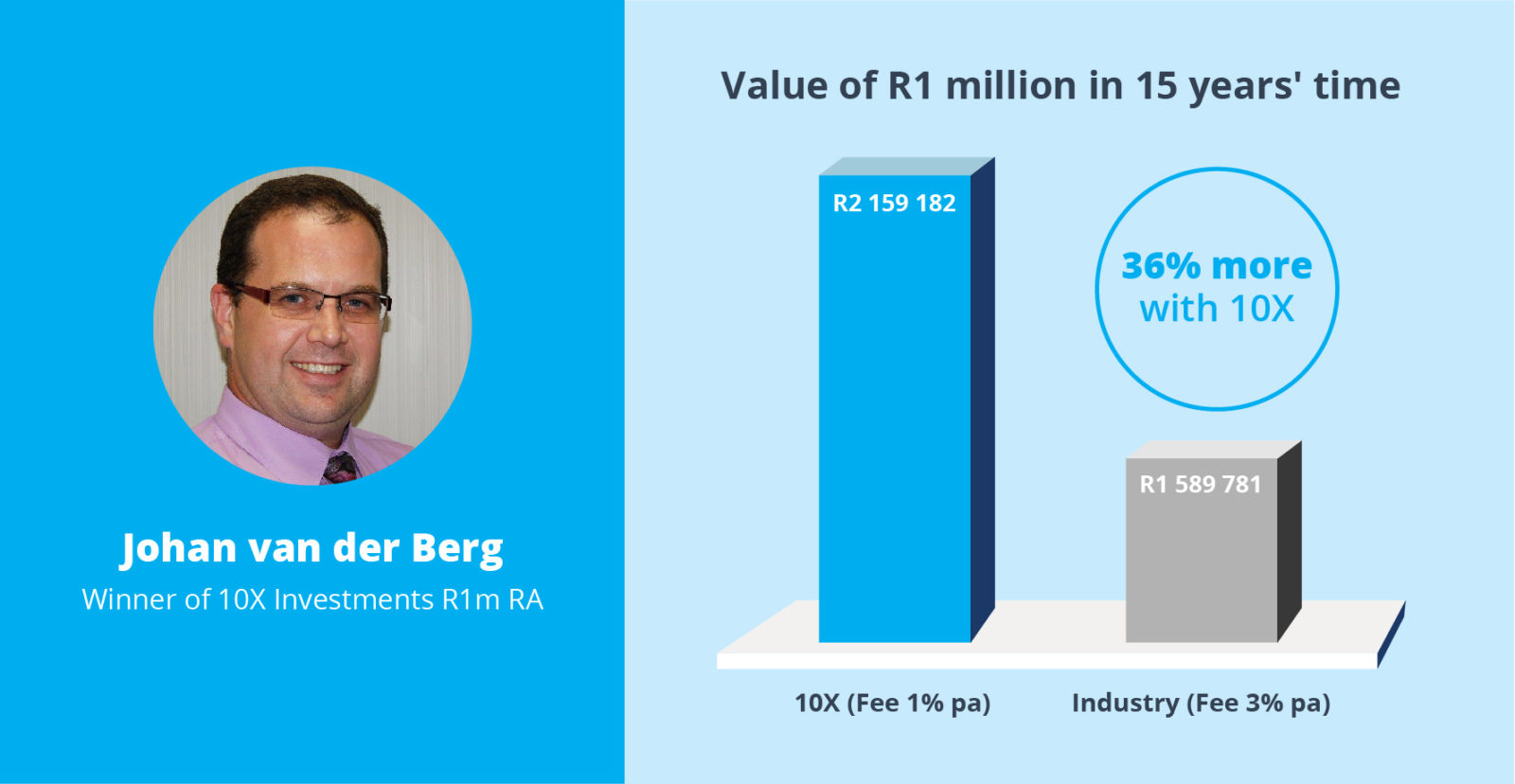 The lucky South African who won a R1 million Retirement Annuity from 10X Investments this week is a classic example of your average South African worker: dedicated and thorough on the job, but tends to ignore pressing issues in their personal life – going to the dentist, making sure they have enough money saved to survive in retirement, that sort of thing.

In fact, Johann van der Berg, whose name was drawn randomly from 17,830 entries to win the retirement savings policy that will go a long way to rescuing his own retirement, says he is “like a mechanic whose car doesn’t work”. The 49-year-old father of one from Pretoria North spends his working days ensuring that big construction projects finish on time and on budget, yet his own retirement savings plan was totally off track before his lucky win.

A national crisis of unpreparedness is laid bare in the often-quoted statistic from the National Treasury, that only 6% of South Africans are on track for a decent retirement. 10X Investments’ second annual Retirement Reality Report (RRR19), which was released in September, confirmed that this statistic is still absolutely relevant.

The RRR19 showed that this year 67% of respondents in the Brands Atlas annual survey* had no retirement plan, or just a vague idea of one, 8% more than the proportion reported in 2018.

Among those who say they are saving for retirement, things are looking pretty grim too. The majority of them have little-to-no idea what their plan is, how it is performing, what chance they have of a decent retirement, or even how much they are paying in fees, many of them saying there are no fees. (Of course, there are fees, no one provides these products for free.)

If you ask around, most people will say they have heard of the looming national retirement crisis. Closer to home, many will have personal experience of watching family and friends struggling to survive after they have stopped working. Indeed, a large proportion of salary earners in South Africa will tell you they struggle under the burden of supporting family members and friends, including many retirees who do not have savings of their own.

Still, it is difficult to get people to engage properly with their own retirement savings journey, which is why 10X Investments sometimes uses unusual tactics to get people to consider their own situation, such as the competition with the R1m Retirement Annuity as a prize.

To enter the competition, individuals were required to engage with key aspects of their own retirement savings reality. After entering their age and the age at which they planned to retire into a calculator on 10X’s website, competition entrants were shown how much R1 million invested today could be expected to grow to by the time they retired. This provided them with a simple, personal illustration of the power of compound growth.

Entrants were also presented with two different scenarios: one illustrating what they could expect ‘their’ R1m to grow to with 10X, a low cost provider; the other with a provider who charges the national average of 3% in fees.

Van der Berg, the competition winner, would have seen that when he reached retirement age he could expect a R1m RA to have grown to R2,159,182 invested with 10X Investments (in today’s money), or R1,589,781 with a competitor who charges the national ‘going rate’ ie a 36% difference in final savings.

As is clear from this example, the additional 2% that people pay in fees, on average, can make an enormous difference to their retirement outcomes. Van der Berg had already learned this lesson the hard way. Despite having saved for retirement for 25 years, he had become very worried about his so-called Golden Years as he watched his Retirement Annuity (with one of the big South African life companies) miss projections year after year.

When he started saving into that fund, he said, he was led to believe that he would retire with R5-6 million, which looked good to him then. But the projected riches have not materialised, and it looks like he will be cashing out around R1 million when he gets to the policy’s maturity age of 55.

Failing to hit projections by such a long way, by at least 80%, would be totally unacceptable in most other spheres of life, a truth this 49-year-old father-of-one lives every day in his job as a financial controller in the construction industry. The new projections mean Van der Berg is looking at retiring on a maximum of 20% of what he was expecting before.

“I spend my days punching numbers into a computer, looking at schedules, timelines, costing, budgets … to make sure that projects are executed on time and within budget,” says Van der Berg. “But, like the mechanic whose car is always broken, I have not made the best choices with my own money.”

Van der Berg’s error was to blindly trust a third party with his retirement, a mistake that many people wake up to only when they retire and realise they have a lot less than they expected and need.

As the sole breadwinner in his family, Van der Berg said he had started to get really worried. “I didn’t know how I was going to get out of that situation, how I was going to support my wife and daughter.”  In his search for solutions, a friend recommended 10X and he came across the competition while visiting the site.

Unfortunately, only one person could win the 10X R1 million but there are almost always ways for individuals to improve their situation. Step number one for everyone is to make a retirement savings plan. There are many simple online tools, such as the 10X calculators, that make it easy to create a personal retirement savings plan.

As illustrated in the 10X Million competition, keeping fees down is a game-changer when it comes to long-term investing. It also makes moving your investments to a low-cost provider a no-brainer.

Those who are ready to transfer an existing retirement savings product across to 10X or open a new one with the disruptive asset manager before December 13 this year will pay no fees at all for the whole of 2020. BM

*The annual Brand Atlas survey samples the universe of economically active South Africans (15,1m in 2019), defined by StatsSA as those with a monthly income in excess of R7,600 per month.

University of Pretoria • 56 mins ago

Ufrieda Ho for Spotlight • 11 hours ago