Paper Tiger: When media transformation is a farce

Paper Tiger: When media transformation is a farce 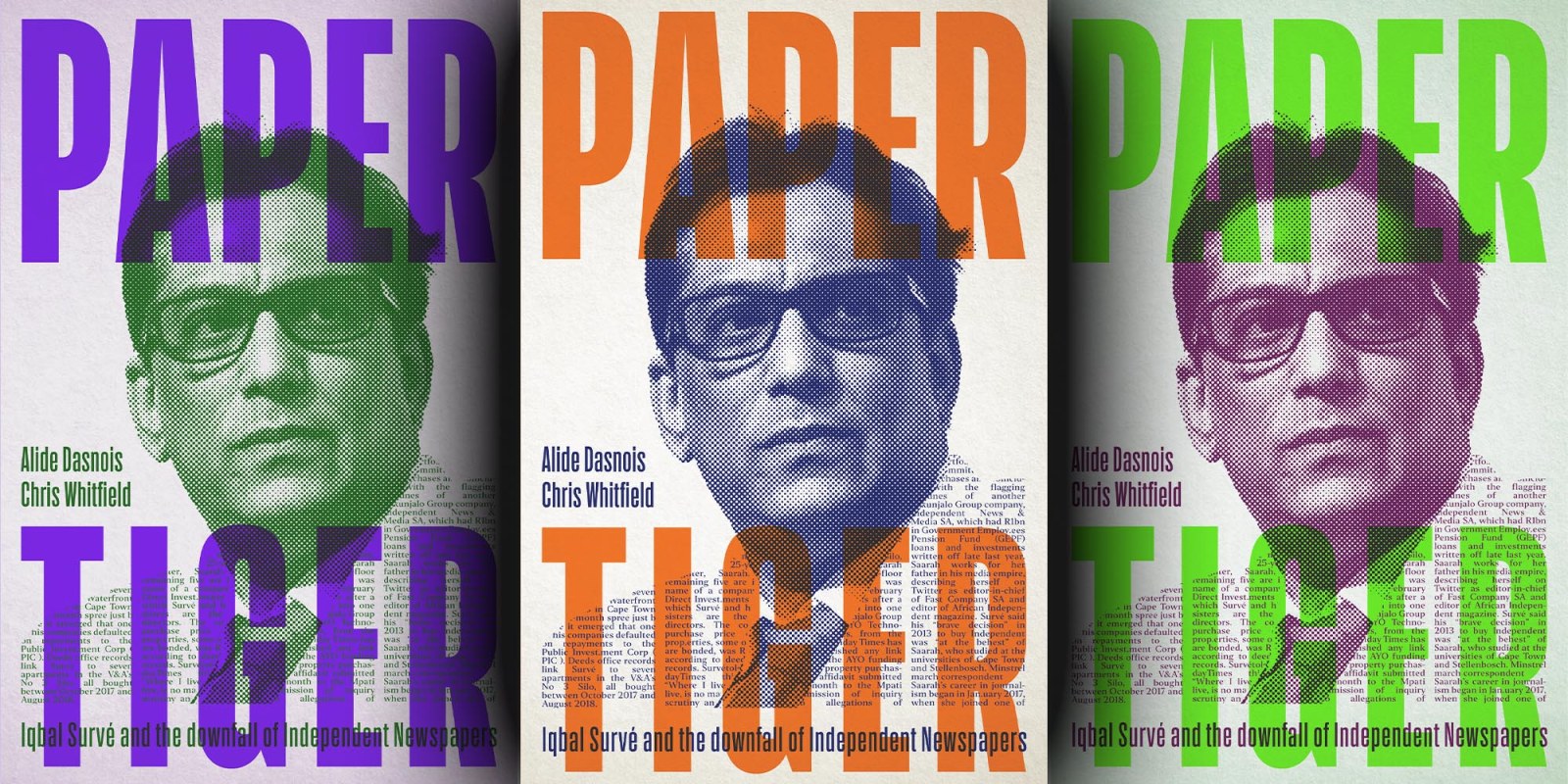 A book published by two former Cape Times editors offers an insiders’ view of the demise of Independent Newspapers under the ownership of businessman Iqbal Survé. But it also provides a case study of how the fine ideal of ‘transformation’ can be twisted and perverted in the wrong hands.

Readers of the Cape Times and other Independent Newspaper titles in the era of Iqbal Survé often express nostalgia for the pre-Survé years, when the media group was still putting out high-quality daily and weekly newspapers.

But as a new book published by two former Independent editors makes clear, the climate at the group’s newspapers was rough well before Survé took the reins. Although the Alide Dasnois and Chris Whitfield-authored Paper Tiger: Iqbal Survé and the Downfall of Independent Newspapers takes Survé’s ruinous ownership as its focus, it also casts light on the destructive stewardship of Independent under its previous Irish bosses.

Survé’s vanity is well known, but Independent’s former owner was not a universe apart. The book records how Irish billionaire Tony O’Reilly responded furiously to coverage of him within the newspapers which he deemed insufficient or unflattering – including photographs in which O’Reilly appeared overweight.

Write Dasnois and Whitfield: “Generally, though, O’Reilly and his managers steered clear of editorial issues. The real damage inflicted by the Irish was more insidious, and often at the hands of a South African management keen to please its foreign bosses.”

Coverage of the rest of Africa was speedily dropped, printing presses closed and editorial staff retrenched. Investment in the South African operations was dwarfed by the scale at which the group’s profits were exported to Ireland.

The South African newspapers, according to former Sunday Independent editor Moshoeshoe Monare, became a “cash pot” from which the Irish “tried to extract as much as possible without any consideration for future investments, innovation or growth”.

Against this backdrop, little wonder that the prospect of a new local owner for the media group was initially greeted with excitement by staff. Such an owner, the thinking went, might be truly committed to investing in the company in a way that allowed it to meet the challenges of 21st-century media.

The book reprints a letter by Dasnois to Survé in October 2013 summarising the situation at the Cape Times after years of Irish asset-stripping. It is a reminder of just how impoverished local media organisations have become in terms of the resources necessary to produce high-quality publications.

In its heyday, wrote Dasnois:

“The Cape Times had a full news desk; a city desk; a crime desk; an arts department with an editor; a deputy editor and several staffers; its own political team; a health reporter; several court reporters enabling the paper to cover magistrates courts as well as the high court; a religion reporter; a defence reporter; a labour reporter; its own team of sub-editors including a page one sub; an editor, deputy editor and several assistant editors; a chief photographer and a team of photographers; a business editor and business staff”.

By 2013, she wrote, the Cape Times was down to just eight reporters to cover the whole Western Cape, with no labour, defence, health or religion reporters; no sub-editors specifically for the newspaper; and almost no budget to pay for opinion pieces. Overworked reporters did most of their journalism from their desks, and there was an over-reliance on interns to produce copy.

Not all of this can be blamed on O’Reilly and his managers: the situation described by Dasnois has been replicated in media companies countrywide (and globally) as print media struggles to adapt to a digital world.

But part of the positive anticipation around Survé’s takeover of the Independent group was his commitment to invest in the newspapers and transform them into publications reflective of 21st century South Africa. Survé styled himself, in his own words, as a “fearless, intelligent, well-resourced black man” truly committed to media transformation.

The first sign that Survé might not live up to his own hype in this regard was his ambivalence towards the idea of an Independent Newspapers staff trust. This project was spearheaded by Dasnois and business reporter Ann Crotty in 2009, when a sale of the media group looked increasingly likely.

The trust would “represent the interests of staff – all staff, not only journalists – and [would] approach funders for credit to finance a 25% stake in Independent’s South African operations when the Irish owners did decide to sell”.

This would give staff a say in the company’s future, and over time dividends paid out could be used for staff training, scholarships and the like. Archbishop Desmond Tutu agreed to be the patron of the trust, the majority of which was made up of black South Africans and women.

Before his purchase was concluded, Survé set the limit of a staff shareholding at 10%, and later dropped it to 5% before eventually bringing it up to 10% once more. Once Survé had bought the group, the trust never got off the ground. Survé’s 2015 promise to staff of “beneficial interest units” in the Sekunjalo Independent Media consortium Special Purpose Vehicle also never materialised.

One of Survé’s first moves as owner was the controversial sacking of Dasnois as Cape Times editor, ostensibly because he deemed the newspaper’s coverage of Nelson Mandela’s death to have been inadequate.

The book chronicles, however, how Survé cycled through a series of different explanations for Dasnois’ departure: from the idea that she had not been fired at all, but offered alternative roles, to the unsatisfactory sales performance of the Cape Times, to the need for the newspaper to become more “business friendly” – before finally settling on the coverage of Mandela’s death.

The real reason for Dasnois’ sacking, it now seems clear, was her decision to run a front-page story on the public protector’s report that the awarding of a fisheries tender to Survé’s Sekunjalo Marine Services Consortium was improper. The publication of this article prompted an extraordinary attempt from Survé to sue his own newspaper, as well as Dasnois and journalist Melanie Gosling.

In Dasnois’ disciplinary hearing, Survé would attempt to paint the former editor as anti-transformation and bent on focusing the Cape Times on a “white elitist middle class”.

Yet Survé had previously expressed concern that Dasnois’ point of view was, in fact, too ideologically left-leaning. In fact, Dasnois’ leftie perspective had been the cause of some tension between her and former Independent Newspapers Cape editor-in-chief Chris Whitfield.

The two write: “The Cape Times was losing readers in its traditional market, especially in the former white suburbs (at the time more than 50% of its readers were coloured and 30% white), and Whitfield feared that Dasnois was pursuing a new market too aggressively by shifting the emphasis in the paper towards stories from the townships”.

The narrative peddled by Survé and enforcers including editorial director Karima Brown was that the newspaper had been synonymous for some time with a pro-DA mouthpiece led by a cabal of white racists.

It took former minister Trevor Manuel to point out in an op-ed article that the Cape Times actually had a proud record of “transformative” journalism, including reporter Tony Weaver’s exposé of apartheid brutality towards MK, and former editor Tony Heard’s publication of a lengthy interview with Oliver Tambo while the ANC was banned.

The idea that the Cape Times was biased towards the DA was also questionable. Under Whitfield’s editorship, the paper “provoked the party’s ire with an investigation which brought down DA Cape Town mayor Gerald Morkel, prompting then DA leader Tony Leon to call for a boycott of the newspaper”.

Under Survé, Independent titles across the country have seen an exodus not just of white staff but also talented staff of colour – making a further mockery of Survé’s claims to be unpopular only with those who are anti-transformation.

Moshoeshoe Monare tendered his resignation as Sunday Independent editor “when it was very clear that my independence as an editor was compromised”. Fellow editor Philani Mgwaba left after “editors began to receive instructions from Iqbal’s underlings and acolytes to publish opinion pieces that shamelessly flattered and promoted him and/or defended him from legitimate questions that were being raised about his curious business interests”.

Dasnois and Whitfield calculate that Survé has appeared in his own newspapers roughly once every five days.

As laid out in Paper Tiger, what has happened to the Independent group under Survé has been disastrous for one of the most influential and respected media organisations in the country. But it is also an illustration of how the valuable ideal of transformation can be twisted and perverted in the wrong hands. DM