As urban inequality deepens, it’s time for a reality check 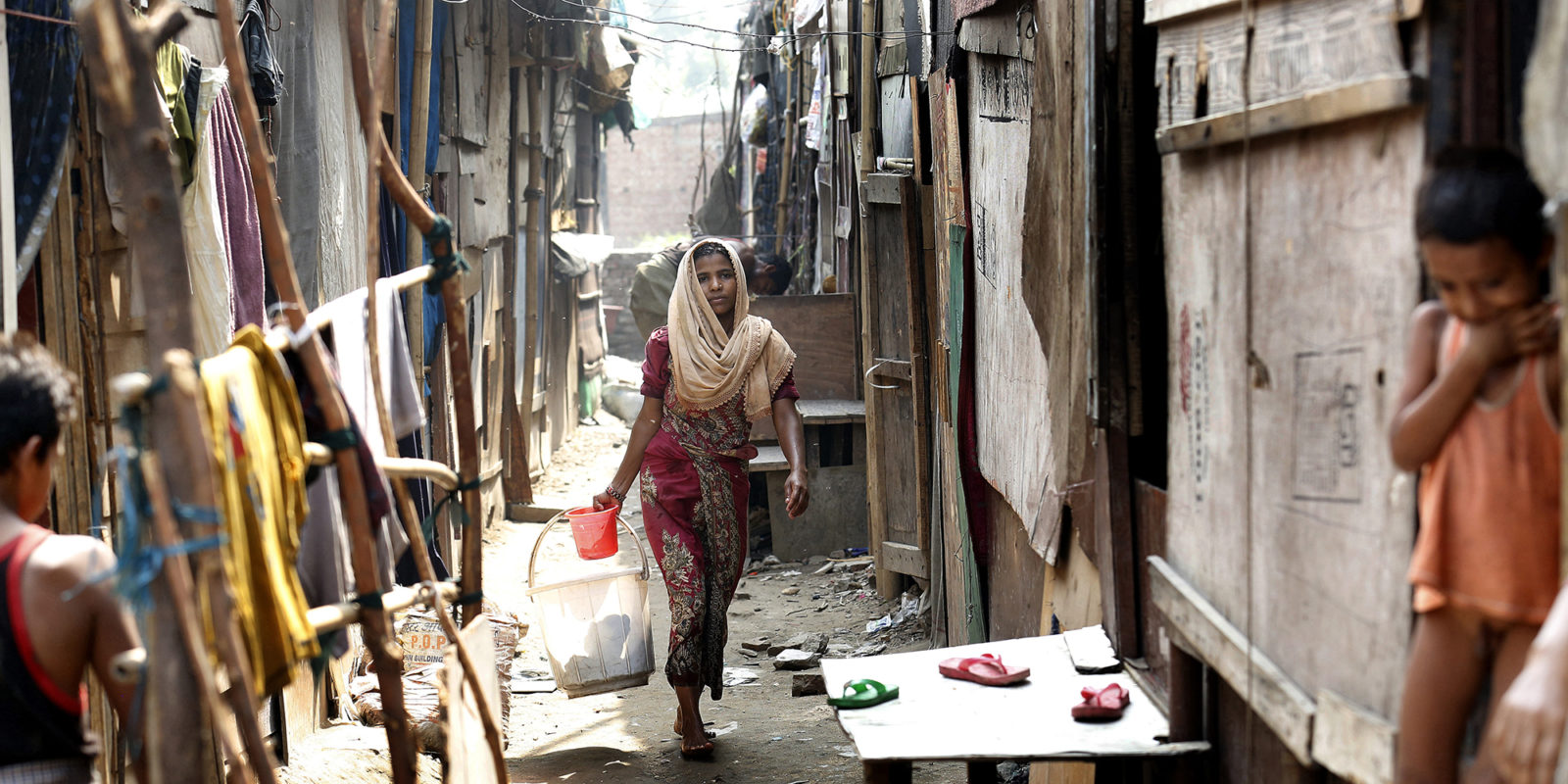 Cities are the engine rooms of economic growth and wealth creation, and draw in millions across the globe who know that even if their lives will be hard, this will be coupled with some free basic services and some better options and personal choices, including who to vote for.

Durga Devi (not her real name) lives in Madanpur Khadar, a so-called resettlement colony in the south-east district of Delhi which is the product of thousands of slum dwellers being evicted from the city of Delhi in 2002 for the Commonwealth Games (the eviction was from the surroundings of Nehru Place to accommodate the development project of a metro station and a new market complex).

Fourteen years later, Durga Devi lives in a typical 12-yard (about 10m2) unit with her two remaining young adult sons, her daughter having married and moved out. In her humble abode are a cot bed, two-plate stove with a gas cylinder, modest shelving and altar, a massive air conditioning unit and a bright red mid-sized fridge with a small TV atop it. Durga Devi glumly informs us that she loves the fridge, which was donated to her, but that it doesn’t actually work. And the AC unit is off – presumably because it would take too much of her electricity to actually run it.

Madanpur Khadar residents like Durga Devi – who we met during our field trips in New Delhi in October 2019 as part of the Sustainable, Healthy and Learning Cities and Neighbourhoods (SHLC) programme) – ought to be happy about new social reforms made by Delhi Chief Minister Arvind Kejriwal who earlier in 2019 announced Delhi government’s power subsidy scheme under which there is no charge for electricity consumption of up to 200 units. And indeed she’s probably benefiting from this to run the TV and charge a cellphone, but that’s about it. She still has to buy gas. She still has a fridge that won’t work.

This story is one that is as familiar in Johannesburg as it is in Delhi. Both are in highly unequal countries – with South Africa’s top 1% reportedly owning 70.9% of the nation’s wealth (World Bank 2018), while in India their 1% hold 73% of the wealth generated (Oxfam 2019). In both cases, the graph lines are going in the wrong directions with the gap continuing to widen. With Oxfam finding that approximately two-thirds of global billionaire wealth is produced from an economy of “inheritance, monopoly & cronyism”, much can be presumed about a key source of the growing inequalities in the two countries.

The complicated multi-level politics of the two contexts is another mutual complication. In India’s case, the country has seen the rise of a nationalist central government, while their national capital territory of Delhi was won in 2015 by a rather surprising landslide by Kejriwal’s Aam Aadmi Party (AAP) which won the Delhi Assembly elections with a historic majority, obtaining 67 out of 70 assembly seats though it holds barely any national seats.

Born out of a historic anti-corruption movement with strong social-democrat leanings, the AAP, which was just recently re-elected as the ruling party of Delhi, runs on crowdsourcing and is apparently the only Indian party that transparently reports its political financing. Their series of bold urban reforms includes the decision to make the use of public toilets free of charge and open for 24 hours in Delhi (where residents had to pay Rs.2/- each time for using the public toilets – a major reason behind open defecation in that area), and a current proposal for free metro bus travel for all Delhi women passengers – all decisions that are extremely popular among Delhi’s many poor urban dwellers.

South African city dwellers are also used to bold promises of anti-corruption, racially nationalist promises, with the Economic Freedom Fighters (EFF) – an avowedly Marxist-Leninist-Fanonist party – using slogans such as “Our land, Our Jobs”. “Ours” can be defined in many ways by different people, and the post-election period was scant on jobs or land being delivered, but did witness yet another outbreak of xenophobic violence against “foreigners”, black Africans who had seemingly taken “our” jobs and land. The EFF is an informal coalition partner running the country’s largest and wealthiest city, Johannesburg, and certainly is in a position to deliver – at city level – on some of its (national) election promises.

As we were thinking about cities and urban neighbourhoods, and facing the advent of yet another World Cities Day which is gaining increasing attention, a question that arose for us was what these two pictures – of a life (Durga Devi’s) and a statistic (inequality) – mean from a political economy perspective?

Cities provide voters with a plurality of choice (often absent in rural areas). They are the engine rooms of economic growth and wealth creation, and draw in millions across the globe who know that even if their lives will be hard – small rooms (if lucky enough to get a formal dwelling), a fight for work, high transport and food costs, etc – this will be coupled with some free basic services and some better options when it comes to schooling their children, accessing healthcare, as well as personal choices, including who to vote for, most obviously.

The cynical response is that populist parties offer just enough to lift the urban poor out of abject poverty, but not enough to allow them to exit poverty, and thus “capture” their votes. This is not about party loyalty or branding, but voting with the stomach. Some electricity is better than none, as is some free water, goes the argument. A free government-provided house is another, for those lucky enough to get one.

In South Africa, the argument in 1994 was that meeting these basic needs was both sufficient to restore the peoples’ dignity so destroyed under apartheid, and in both India and South Africa, the social goods are meant to allow people to enter the market. After seven years occupying an RDP house, for example, South Africans can sell it and use the capital as they wish… but seven years is an awfully long wait when there are no jobs and costs keep rising. In India, a small amount of free electricity is no doubt “a good thing” – but when the connections are shaky and the daily ration enough to charge a cellphone with larger, economically useful assets (fridges, freezers, cookers) beyond their reach, “entering the market” is a pipe dream.

So in both cases, these promises, and the basic needs they claim to meet, are the bare minimum; enough to convince the urban poor to vote for this or that set of politicians, but not enough to lift the poor out of poverty. Rather, it creates a cohort of voting fodder who will vote for something rather than nothing, for some concrete benefits rather than ideals or freedoms – but are increasingly cynical about the efficacy of democracy. This notion of “vote banking” has long been used to describe this kind of slum-level patronage politics in places like India and Kenya, and is as applicable as the notion that cities require an underclass of cheap labour for the middle and upper classes to maintain their lifestyles.

However, in South Africa, the urban poor, in this instance true of the poor generally – are least likely to register to vote, and least likely to vote if registered, while the middle classes – the “haves” – use the ballot box to reward or punish politicians. Giving poor urban dwellers some electricity matters, of course – but they need to be able to access it; to afford more; and to be able to put it to social and economic use. Staring at a dead fridge will not allow Durga Devi to store goods for herself or others, or set up a stall selling fresh or frozen goods. Rather, it sits taking up space in her tiny room, mocking the dreams it obviously represented.

The World Cities Day slogan on 31 October this year is “Better City, Better Life.” As we celebrate this ideal, there are questions we ought to be asking ourselves from this comparative perspective: Do we really have the will to change the lives of the poor, or do we need them to provide both a market for goods and a reserve army of cheap labour and votes? How do we go beyond our slogans of smart cities, caring cities, healthy cities, etc, and turn these into lived, sustainable realities for the poor? Or, frankly, are we quite comfortable with deepening inequality where the middle classes get what they need and have the connections and influence to use the ballot box, while the poor are left as voting fodder for populists to promise a changed life… but not changed to the point where the poor exit poverty, and begin to exercise their own political agency on the basis of some resources, some education, and some market power?

We wish a Better City, and indeed a Better Life, to you all. DM

Professor David Everatt is Head of School at the Wits School of Governance, where Dr Geci Karuri-Sebina is a Visiting Research Fellow. They are both currently involved with an international comparative urban research programme titled Sustainable, Healthy and Learning Cities and Neighbourhoods, being co-ordinated by the University of Glasgow. The opinions expressed here are their own.