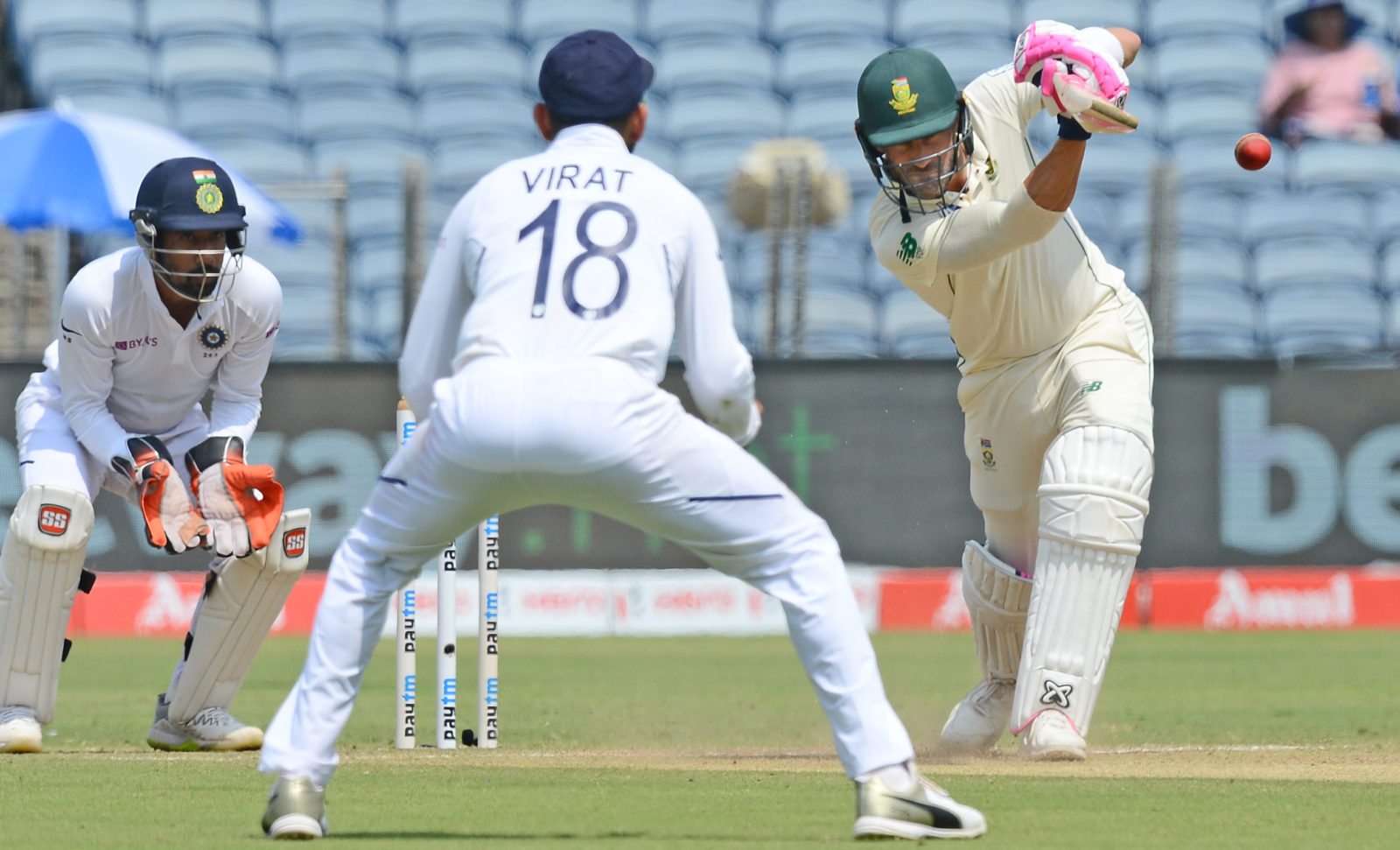 For the Proteas in India, it was another day of anguish, which has become the new normal on a tour that is unravelling faster than the Democratic Alliance.

South Africa were dismissed for 275 in response to India’s 601 for five declared on day three of the second Test in Pune on Saturday – 176 short of the follow-on target.

Whether India captain Virat Kohli asks the Proteas to bat again will have to wait until Sunday morning, but there is little to suggest that the Proteas can make up a deficit of 376, let alone surpass it so India have to bat a second time.

After nearly two days of slog in the field as a Kohli-inspired India racked up a huge total, the skipper making 254 not out, South Africa couldn’t stem the bleeding with the bat.

Only a 109-run ninth wicket partnership between Vernon Philander (44 not out) and Keshav Maharaj (72) spared South Africa from complete humiliation as they managed to keep India in the field for 105.4 overs.

That stand might just be enough to convince Kohli to bat again, rather than enforcing the follow-on. Big scores and big partnerships are still there to be had for players willing to knuckle down on a pitch that is offering little for all parties.

It is unrealistic to assume that South Africa could score 450-plus, which they would surely need in order to give India some cause for concern, but Kohli might fancy another three hours of batting on day four just to crush South African spirits further.

Resuming day three on 36 for three, South Africa made it through three overs of the morning session before the first breakthrough occurred.

Night watchman Anrich Nortje edged a tasty delivery from seamer Mohammed Shami to fourth slip where Kohli took a straightforward catch. There is no keeping the India skipper out of the game.

Theunis de Bruyn appeared to be firmly set, having played well the previous evening and into the morning session. But he edged a fine delivery from Umesh Yadav that nipped off the seam. Wicketkeeper Wriddhiman Saha took a spectacular diving catch to complete the dismissal. De Bruyn slunk back to the change room for 30.

That left SA’s only realistic hope of producing something resembling enough runs on the shoulders of captain Faf du Plessis and elegant left-hander Quinton de Kock.

For over an hour the pair batted serenely and looked set to make India suffer some of their own medicine in the field. A partnership of 75 was only a start.

But spinner Ravi Ashwin conjured up a brilliant ball that pitched on middle and clipped the top of De Kock’s off-stump, ending his innings for 31.

Senuran Muthusamy came and went for seven runs, trapped leg before by Ravindra Jadeja, despite a desperate review following umpire Richard Llong’s original decision of out. It was the first time in three visits to the crease that Muthusamy has been dismissed during the series.

Du Plessis continued to mix aggression with stout defence but eventually his number was up when Ashwin found some turn, forcing an edge. A diving Ajinkya Rahane did the rest at slip.

That brought Maharaj and Philander together. They dovetailed well for three hours, but inevitably it was Ashwin who found a way to end India’s frustration. A ball drifted into Maharaj’s pads and he only succeeded in paddling it to leg slip where Rohit Sharma swallowed a straightforward catch.

Maharaj ended as the top scorer, which completed another strange record. It was the first time in Test cricket history that a number 10 batsman (or lower) was the top-scorer in consecutive innings. Dane Piedt top-scored in the second innings of the first Test in Vizag.

Ashwin mopped up the innings by trapping Kagiso Rabada for two, so finishing the innings with tidy figures of four for 69 off 28.4 overs and putting his side on the brink of series victory. DM