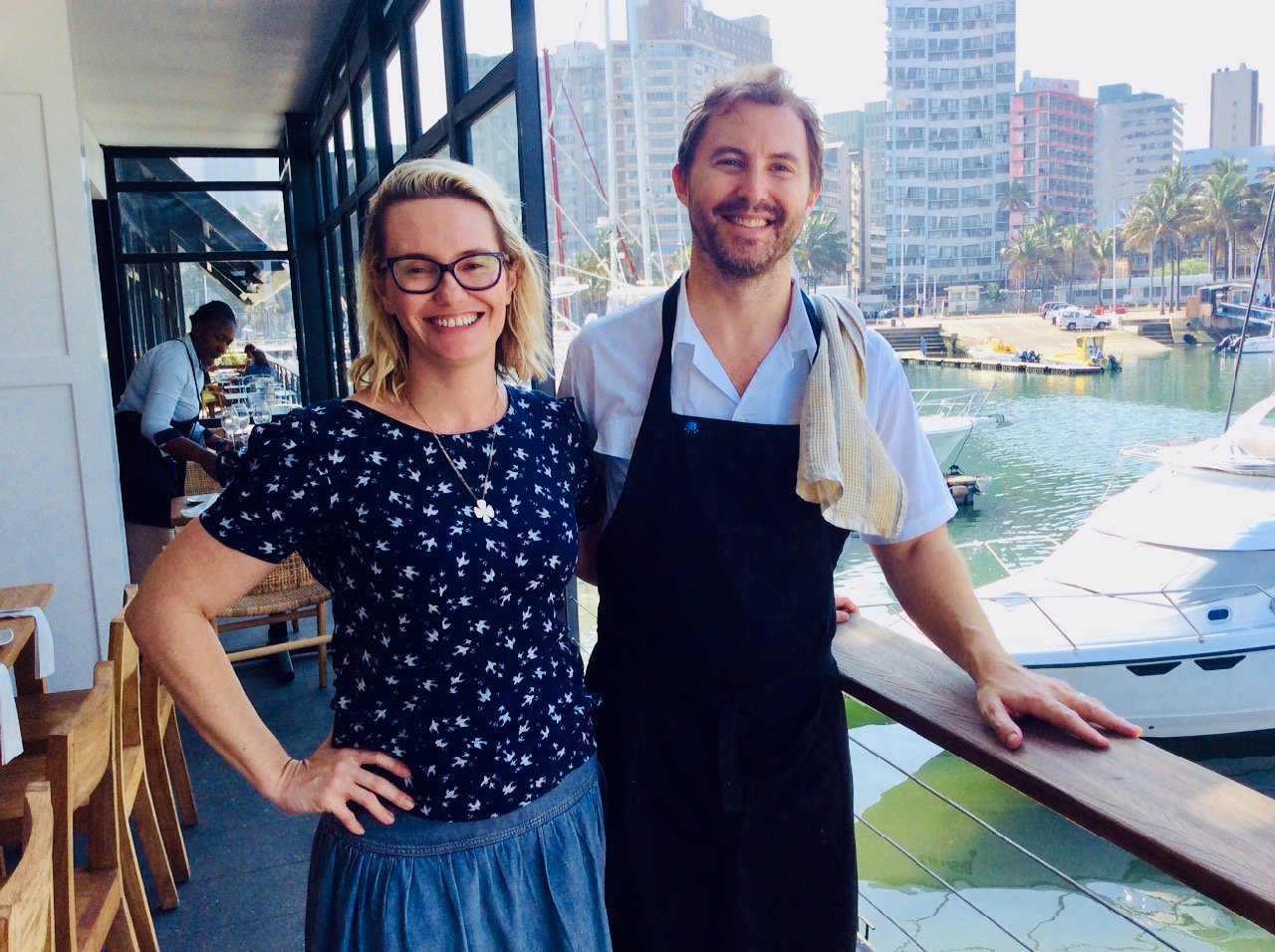 When a Durban destination restaurant moves from its gloomy parking-lot location to a waterside setting there is reason to celebrate. And old fans and new are stepping out and stepping up. For good reason.

Never have I been in as elegant a rugby-viewing setting. A huge screen with two teams thundering around in mortal combat while limoncello steeps at leisurely pace between the bar and one of Durban’s best bay views. “We make our own,” I’m told when I ask about the filtering liquid.

Before climbing to this upper level I pass Graham Neilson and his team of chefs in the kitchen. During the next hour or two, I will see them preparing, plating and presenting Neilson’s renderings of lamb shoulder, roasted duck, queen prawns, grilled fish, fish and chips. Baby langoustine tails on orzo with lemon foam. A pièce de résistance pistachio nut parfait with white chocolate ice cream, raspberry and halva. Artistry on the plate.

Lots of plates. Lots of artistry. And alchemy.

I am here to speak to Chef Neilson. And in more detail to Gina Neilson, his business partner – front-of-house – and life partner. I know, by reputation, that the couple are Durban restaurant darlings. Meeting them, “pigeon pair” comes to mind. Both are friendly. Professional. Committed. Engaged and engaging in the handling of their disparate, complementary roles.

The good news – reason to pop the cork and celebrate – is that they haven’t joined the mass exodus of Durban restauranteurs who have headed north of the Umgeni River, to Umhlanga and beyond. Where, if rumours are to be trusted, some aren’t doing so well – and there is evidence of movement back into the city.

But they did think of it and were looking, Gina confirms when we chat. They were aware (hallelujah) that after 18 years at a grungy parking-lot location near Greyville, their acclaimed 9th Avenue Bistro needed to move.

There was synchronicity in how it happened. How they became 9th Avenue Waterside, knowing they needed to keep the award-winning “9th Avenue” brand intact.

Now knowing also that – who knows? – maybe with time “Waterside” will become the abbreviated name, given the new location.

“We had 90,000 website hits at the beginning of August when we announced we were moving,” says Gina as crispy roasted free-range duck with glazed carrots, green beans, mushroom and lentil cream and hazelnuts is carried past us from the serving counter. Sailboats bob in the gentle breeze outside. We look across masts and reflections to Point Yacht Club. To the high-rises of the Esplanade on the left. To international boat moorings and ocean-crossing harbour traffic further on.

They put a video on their website before the move. In a few short days it had recorded 14,000 views. “We didn’t anticipate the level of interest and excitement,” she says.

Although perhaps they should have. They are one of fewer than a handful of surviving innovative fine-dining destination restaurants in Durban.

Gina tells me they’d been looking to move. Looking north, given that a lot of their regulars had moved there. Although not enthusiastic about restaurant-congested Umhlanga Village.

Then they were approached by investors who, it transpired, wanted to tender for the site of the old Cafe Fish, forced to close in 2010. (The property is owned by Transnet.) The shell of Cafe Fish restaurant had stood abandoned, forlorn, for years. A reminder of good times, good food, eating seafood with a view.

Finally the city had condemned the building. It was scheduled to be torn down.

“They (the investors) wanted to open a restaurant there and approached us to be consultants. To advise. To create a menu.

“Graham and I had both loved Cafe Fish – as so many people did. The space. The location. We were so sad when it closed.”

The restaurant pair immediately knew they wanted to do a lot more than consult. “To move to this site was a no-brainer.”

A collaboration ensued with the investors. A partnership was established. The Neilsons are now directors: shareholders in the business. Architect Kevin Boyd (see him talking about Waterside on Vimeo) would do the design. Decisions were made around sustainability. The need for a multi-use space. An upstairs area suitable for parties, cocktails — and rugby. A deck area that awaits suitable awnings. The transformation is amazing. And there is a 10-year lease (with Transnet) “which justified the cost of the upgrades – over time”.

Turned out the investors had fallen in love with a harbour restaurant in Vancouver, Cardero’s. The menu tweaks – specifically more seafood – are modelled after this. Fresh mussels and seafood platters are new items.

Other than the Norwegian salmon and prawns from Argentina (“because at this point the Mozambique prawns are red-listed,” explains Gina), the seafood served is locally caught. Chef Neilson is also committed to serving fish that have completed their life-cycle and spawned.

The signature gorgonzola, pear and candied pecan nut salad, the creamy orzo with baby lango tails and lemon foam and the grilled calamari salad – favourites on the menu since 9th Avenue Bistro opened – are still there.

To go back to the beginning, Graham and Gina met while working at 9th Avenue Bistro. Or so they thought at the time…

Gina, after she left school, studied international hotel management. Then went to live overseas. Worked for two years as an air hostess. Until, at age 22, she decided she needed a “proper” qualification and came back to Durban and enrolled for a four-year teaching degree.

To pay her way she got a job waitressing at 9th Avenue Bistro, then owned by husband and wife team Carly and Frances Goncalves (who in 2010 moved to Australia).

“Carly taught me to fall in love with food,” Gina says. “To understand flavours, balance, culinary innovation. To develop a passion for food and wine.”

Graham, meanwhile, studied philosophy and marketing at UKZN (Pietermaritzburg) after he left school (Kearsney College). Then enrolled at the former Christina Martin School of Food and Wine.

He subsequently travelled, worked in top establishments in the US, the UK (where he added to his classical French training), Bermuda, South America – and at Fordoun in the Midlands when back in South Africa. Before joining Carly Concalves at 9th Avenue Bistro.

Which is where the couple thought they were meeting for the first time.

But on reflecting, they discovered they’d been in Class 1 and Class 2 together at the same Durban North primary school.

Graham had worked with Carly Concalves for three years when Concalves decided to pack for Perth. Gina was teaching at a school in the Midlands. Concalves offered them the restaurant. He knew they didn’t have the money to buy it upfront but said they could pay if off.

To make it work as a business they knew required both of them. So she resigned from her job. The pair took over 9th Avenue in 2010. “Wonderful food. Wonderful service.” But always that parking lot position.

At Waterside the menu changes seasonally, weekly – even daily, says Gina. Same as before, it is often inspired by produce from Shongweni and the Midlands. Or by the weather. Hearty when cold. Salady and light when hot. There is always duck. Always lamb. But how it is served varies.

“Graham’s love language is food,” Gina shares. “His passion is cooking for people.”

Happiness, he concurs, has been the instant popularity of the new venue. That they’ve been able to hire back some former Cafe Fish kitchen staffers. That one of the new assistant chefs had fallen on hard times, was recommended by a soup kitchen, and is working out. That they can now add “great location” to superior food and excellent service.

So where does Neilson like to eat when he leaves the restaurant kitchen? It’s a question one feels one must ask a chef both for endorsements and in the hope that some secret spot might be revealed.

Mostly at home, he says. “I love cooking for my daughter and Gina.” Simple meals. Often grilled. But he does have some favourites when they do venture out.

The Thai dinner menu at St Clements. Bunny chow at Florida Fields. The delights of Mali’s Indian Restaurant. Occasionally a falafel from Falafel Fundi, picked up on Florida Road.

Meanwhile, no reason not to indulge in rugby with a view and perhaps a Cognac. Or at least with a bottle of Champagne to quaff. Whether your team wins or loses seems incidental. DM