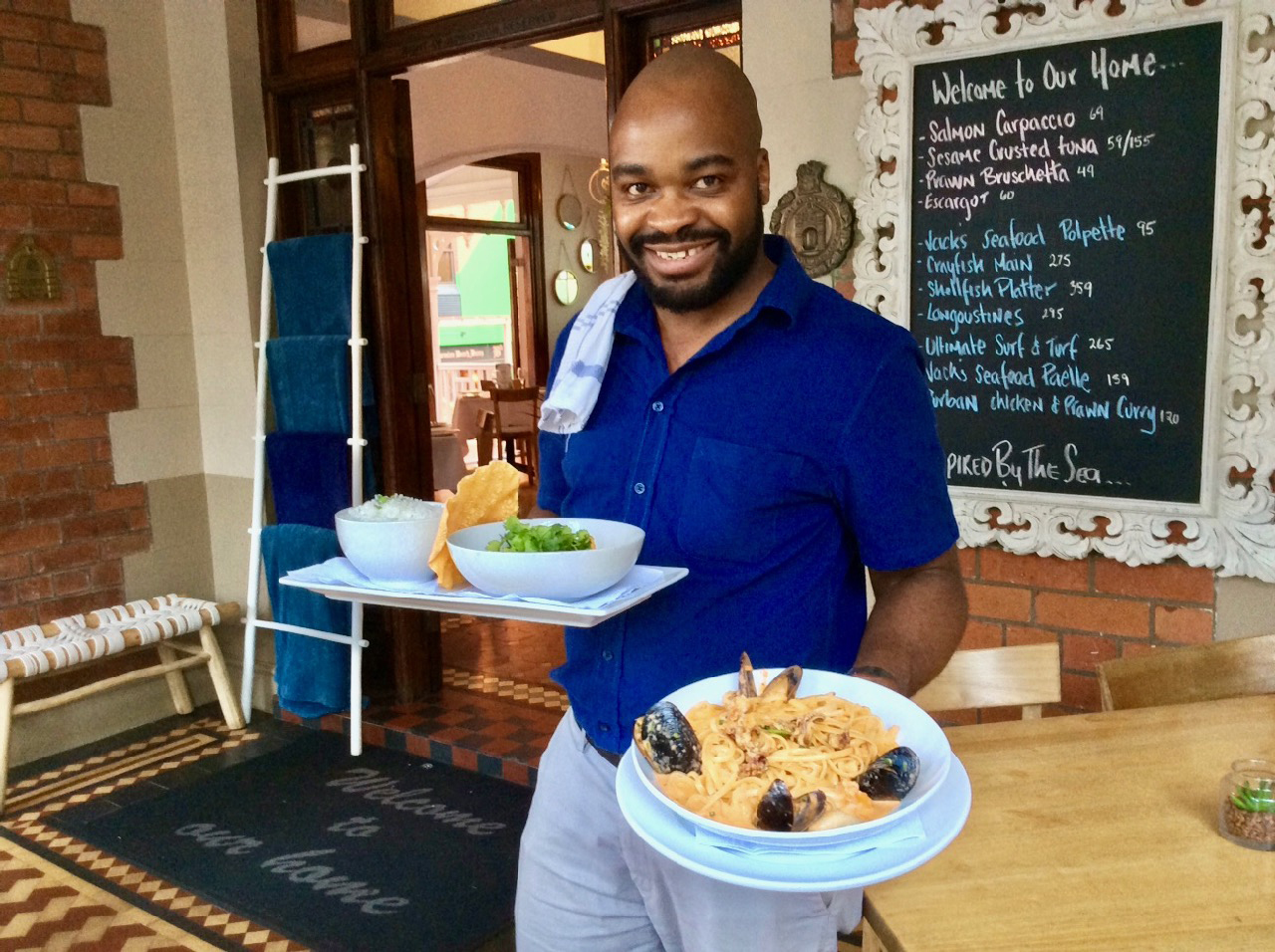 Martin Martins, a manager at Jack Salmon, does it with dash – with seafood pasta and fish curry. Photo: Wanda Hennig

Cape Town has Long Street and now Durban has a sunny new food-all place to hang out: it’s arty, upscale, has loads of attitude, and it’s creating a buzz. Get there...

A couple of years ago, Marco Nico, one of Durban’s chefs-to-treasure, opened an eatery called Thirteen – it was his 13th – near the top of Florida Road. This was cause for celebration for those of us who have stayed in the city these past few years and watched friends and restaurants beat a retreat to Umhlanga and beyond.

Sadly, most Durban people – even those who profess to love a menu that is creative, Spanish, European, artisanal, forager-inspired (are words that come to mind) – refused to go to Florida Road. Would not try Thirteen. To such depths had the reputation of the street dipped.

And so, after not too long, Thirteen closed. Those of us who had gone – as often as possible – mourned.

If only he had waited a couple of years. Like till now.

“Have you been to eat in the garden with the sculptures at the top of Florida?” my arty friend Gloria asked me about six weeks ago.

Florida Fields is the new happening place close to where Thirteen came – and went. And let me mention this for non-Durban foodies who haven’t been keeping track.

Florida Road has seen a resurgence over the past couple of years. It used to be cool. Once upon a time, long before it was cool, arguably the most stylish, arty, uber-cool destination spot ever to grace Durban, the Hotel California, opened – and like Thirteen, closed after not too long, on Florida Road. “Pearls before swine,” as a Facebook friend commented, looking back.

People, meanwhile, still talk about a millennium street party that everybody in Durban at the time – I was in California, so absent – seems to have gone to back when the 20th became the 21st.

Part of the street’s appeal is that imposing “old-world” Durban homes were, over the years, transformed into eateries, pubs and so forth. Some of which will be actively avoided by folk who gravitate to other spots, such are the joys of choice, taste and diversity.

Back to Florida Fields.

I paid my fourth visit there this past weekend, this time to write about it for our esteemed TGIF food editor.

“Molecular, fusion, deconstruction, duck, crocodile, texture profiles, wine pairings, specialty game dishes…” The words roll off Tim Lander’s tongue. Turns out the owner-manager of the recently opened Steak & Grill Co (“a brand new concept” and not part of a chain), while not in the kitchen right now, used to work as a chef and truly knows his food.

Lander is talking about the upstairs restaurant – the anchor tenant at Florida Fields along with Jack Salmon Fish House, which is downstairs and where he is manager/partner.

The two restaurants, different but one entity, are located in the property’s long-ago-converted grand one-time residence. There are stained glass windows, gorgeous pressed ceilings, pristine tiled floors. All original.

The key sculpture (one of three) is Morphous, by South African artist Lionel Smit. Twin heads looking in different directions and, appropriately, “evoking questions of time, looking back and forward and the balance point at which our country finds itself as we embark on the next chapter and the social challenges that we all face”.

Taking about Jack Salmon, Lander points out that the fish is all locally sourced (bar the Norwegian salmon) and sustainable. Mussels and oysters are flown in live from the West Coast. The focus is on flavour and quality.

By chance and independently, a group of eight of us were eating there that night. (The buzz about Florida Fields had inspired a friend to book.) There was strong praise for the preparation, flavour and juiciness of the dorado (fresh line fish of the day), which three people had; for the prawn poke (which looked like colourful art in a bowl); for the grilled fish and chips, a house special, which two people ordered; and from me for the plumpness of my West Coast black mussels (which looked – I hate to say this, but say it in a complimentary way – botoxed).

House of Bravo, a “proper” store (in a building), has as its mission plastic-free shopping, quality products and zero waste. It is set up to be the modern equivalent of a “little old-fashioned market”. Thus you can go there to buy organic veggies, fresh farm milk, free-range eggs as well as nuts and cereals and household cleaning products and lots more.

They sell glass containers to fill with your purchases (or take your own); provide paper packaging. And along with cookies, crunchies and other “tasties” to munch on with your Tanzanian/Ethiopian/Rwandan-blend coffee, they serve up a daily lunch special, often a curry.

“We’re all baristas and we’re a team,” Ulli Transner, from Austria, said when I was setting up my photograph. Thus we have her, with TKay and Lillian Hamandishe, as our uber-friendly enthusiastic trio.

I have heard kudos from several sources for the chicken meals from Bird & Co, where Nahid Osman and Dudu Mlima did the picture honours. The chickens (hormone free) come from Riversmead near Port Shepstone.

The original Bird & Co opened at a market in Ballito. There, they have a burger with bacon. But here on Florida, because of the demographic, “we dropped the bacon and are 100% certified halaal”.

Another outlet several friends have commented favourably on is Glamwich, a fun take on “glamorous” sandwiches. And they are. Good looking (open sandwiches), I mean.

“This whole Florida Fields concept was, I think, inspired by the vibe at Long Street in Cape Town,” manager James Delport shared.

They are also into sustainability, supporting local outlets – and a collaboration with Barn Owl Coffee. So you can get your morning sarmie – and pay at the same time for a voucher you take to Barn Owl for your caffeine hit poured by popular Durban barista Tom Ndlovu, formerly of Vida, Seattle and Jacksonville, who has a personal fan-base following.

No Durban restaurant scene would be – well, Durban – without bunny chow. And so we have Bunny Chows by Two and A Half Men. Brothers Shane and Sean Ramautar are the

But my parents had a takeaway in Park Rynie for 25 years.”

While their dad is “late”, their mom, “Mumsy” Ramautar, is behind the scenes, cooking out of a commercial kitchen.

“Like lots of Indian families, we love food,” says Shane. “We will go plastic-free soon as we can.” Meanwhile, he says, business is so busy, they’re already growing out of their small space.

I haven’t written here about all the eatery options at Florida Fields.

Some people love the ice cream that people queue for. But it’s Joburg ice cream and while creamy, I am sorry, but who can take, seriously, ice cream that has flavours like “birthday party” and a “salted caramel” that wasn’t. Neither will I write about the Asian joint that had us wait more than an hour for a simple takeaway order, then got it wrong. And I might sound grumpy if I mention others not on the “A” list – so no comment about hubbly-bubbly pipes and food pairings.

Florida Fields has a Sunday afternoon and evening sundowner session. They play music, which – like food – is individualistic and dependent on taste. Who, I wonder, are they trying to appeal to with indigestible DJ house music that one cannot talk over and doesn’t want to listen to? Why not acoustic music and live artists when there’s so much talent around? Lucky I don’t need to give my opinion on this.

And on a decor note. If only the Hotel California design team could come back just long enough to suggest someone remove the dangling bunches of silk flowers from the perfectly acceptable light features in the stately and gorgeous old house that is home to Jack Salmon and the upstairs meat joint?

But then, I am writing about food. So let me stick to that and just end with a thank you to the folk responsible for bring the Florida Road buzz back. You know who you are. DM

Wanda Hennig is a food and travel writer, based in Durban, who lived and wrote from San Francisco for 20+ years. She is author of Cravings: A Zen-inspired memoir about sensual pleasures, freedom from dark places and living and eating with abandon (Say Yes Press, 2017). Reach her online via her website, Wandalust Online.

Politics is just not the same without Julius Malema, Floyd Shivambu and Mbuyiseni Ndlozi, PhD