The trials and joys of travelling in overloaded malaichas to Zimbabwe

By Bernard Chiguvare for GroundUp• 10 October 2019 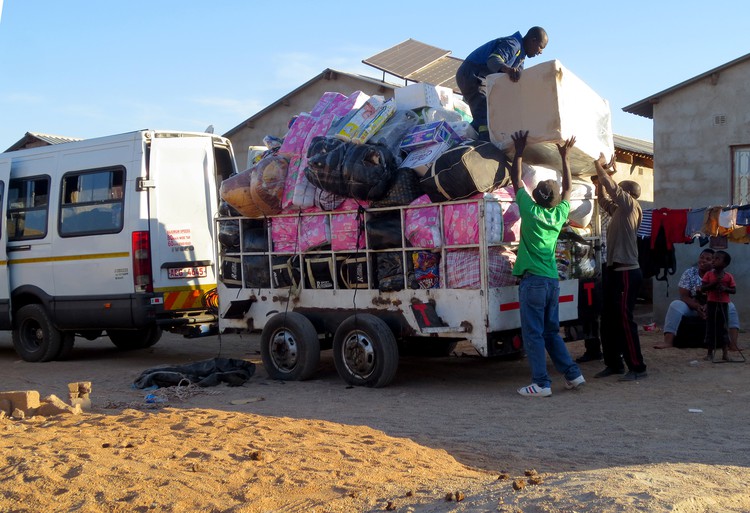 The minibus taxis with their trailers filled with goods offer a glimmer of hope for desperate people trying to make a living.

“Wait and see for yourself: the sky is the limit,” said the man halfway up the trailer.

He was loading more and more goods on what already appeared to be a mountain of luggage. We were about to set off for a journey to Rusape, a town about 250km west of Harare in Zimbabwe.

The “malaichas”, as the minibus taxis towing the heavy trailers are more commonly known, have fascinated me for some time. You will find them all along the N1, some even starting their arduous journey in Cape Town. Along the route they pick up more passengers, more luggage and they inevitably break down.

The more accepted version states that the word “malaicha” comes from the Ndebele language and means “transporting goods to and from”. There is also a version that says it is derived from the Swahili language where it means “angel or messenger”. I believe there must be something angelic about these transporters, because without a stack-load of belief you will not tackle such journeys with such vehicles over such distances.

A couple of months ago the urge to put a “face” to these malaichas developed. Who drives these taxis, where do they go and why are there always empty containers, a little bicycle and bags of blankets to be found somewhere in the stack on the trailer?

Two Saturdays ago, determined to find out how the malaicha operators work, or rather survive, I travelled to South Africa’s most northern town, Musina. From there I had to get a taxi to take me to the border post at Beit Bridge.

I planned to go to the small town of Rusape which, according to Google Maps, is 574km from the border post. The road winds up north to Masvingo, where it swerves east before heading north again. Google reckons it should take 7 hours and 22 minutes. I quickly found out that Google does not always know, and it definitely has not encountered a malaicha.

Carrying my two bags, I went through customs and crossed the border. A few metres into the Zimbabwean side there is an open area where I was told to look out for a malaicha driver. I was clearly not inconspicuous, as an army of taxi drivers quickly approached me. A frantic scuffle ensued during which I had to fight to stop the drivers from grabbing my bags. Luckily, a Zimbabwean policeman came to my rescue, calling them to order and guiding me to the correct taxi rank.

At the Dulibadzimu rank, I rushed straight to a taxi destined for Rusape. “We have to load everything quickly, so that we leave Beit Bridge earlier,” said one of the helpers loading the trailer. I stood watching while the pile simply got higher and higher. The stack contained building material, empty 25-litre containers (lots of them), blankets, boxes of soap, cooking oil, bicycles, disposable nappies and large bags full of chips packages (commonly known as masimba).

I was curious as to why such a strange collection of luggage. “We have to buy these empty 25-litre containers. In Zimbabwe the taps are dry most of days, so we need to store water. We need a lot of water. At times the taps run dry for almost a week,” said one of the female passengers, whom the others call “Senior”. She goes by that name because she has been a cross-border trader since 2000. She buys groceries and other goods from Musina for resale in Rusape.

I asked her about the other products on the trailer, like the masimba (small packets of flavoured chips). “Those are for the children,” she said, explaining that it is the cheapest “lunch pack” that parents can give to their children when sending them off to school in the morning.

As far as the loading of the trailer is concerned, there seems to be some sort of strategy. Boxes of soap form the first layer, followed by boxes of cooking oil. On the sides will be either packets of masimba, pampers (disposable nappies) or blankets.

It is not only the trailer that has to carry the burden. On the front seat of the 26-seater taxi, the bags containing packets of bread and biscuits are loaded. The passengers go towards the rear of the vehicle.

“Why do you use the Ivecos?” I ask the driver. “We prefer using them because they can pull very well and our passengers are comfortably seated all the way to Rusape,” he says.

Behind the taxi, at the trailer, the wall goes up until every item is loaded. The load is covered with a plastic sheet and wrapped with a spider’s net of ropes. The last items to be loaded are the tyres and the building material, some of which stick out of the back and the front of the trailer. 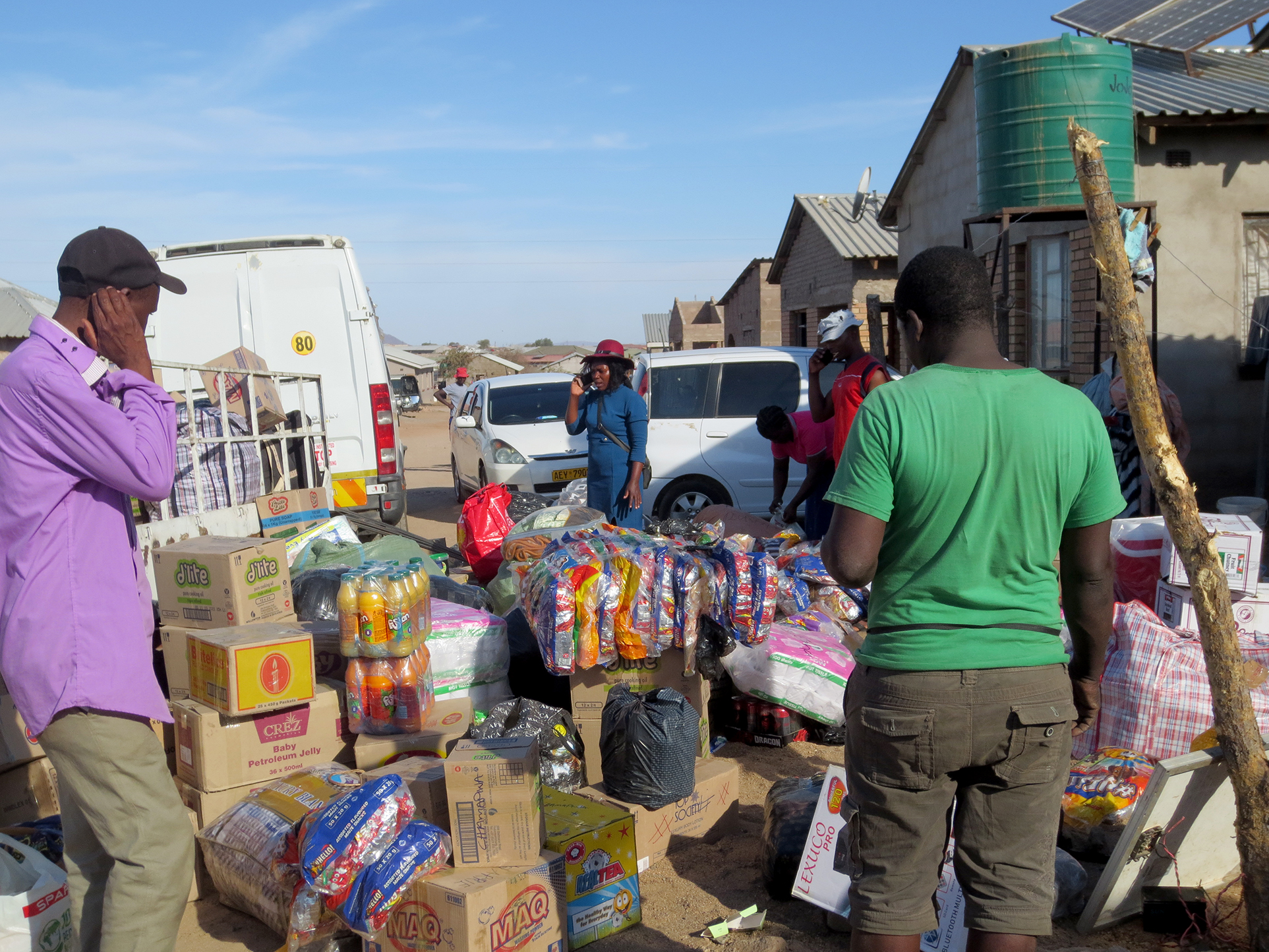 We departed from Beit Bridge at around 6pm and I was hoping that we would arrive at Rusape in the early morning hours. This was, unfortunately, not to be.

After travelling for about 100km, the first two tyres burst. To me it felt as if we were in the middle of nowhere, but the driver and helper did not seem perturbed. Two spare wheels were collected from the trailer and an hour later we were on the road again.

A further 150km we stopped again. Another tyre was flat, but this time it was fixed and pumped up again. From there on it became a pattern and every 100km we stopped to check and replace tyres. I realised why so many tyres had to be loaded onto the trailer.

The trip was further delayed by a law-enforcement operation by the Zimbabwean police. They are apparently trying to clamp down on cross-border trade. All goods brought from South Africa need to be declared and the necessary money paid.

It became clear that the malaicha drivers are forced to be pragmatic when law enforcers pounce. It is simply easier to pay the informal “fine” when travelling on Zimbabwean roads. The “going rate” seems to be 20 Zimbabwean Bonds (about R30 at the time of travelling).

For the rest of the night and most of the following day, we slowly made our way to the north. The driver may have confidence in the Iveco’s “pulling power”, but it is nowhere near fast, doing anything between 80 and 90km/h. We reached Rusape at about 16:00, after spending almost 22 hours in the taxi.

My fellow-passengers were mostly small traders, doing the route at least twice a week. After reaching home on Sunday afternoon, they take a bit of a rest. On Tuesday afternoon, they leave Rusape again, heading south. They arrive on Wednesday in Musina and do their shopping. Some go further south where the big retailers are. On Wednesday evening the malaichas head north. They arrive on Thursday afternoon and the next day the journey to the south repeats itself.

For the drivers, one of the biggest challenges is buying fuel. Fuel gets bought on what is known as the “parallel market”. This means spotting a person standing next to the road who will flag you down and then quickly collect a container full of fuel from the bush. “We have no choice but to buy from the parallel market, because we are not sure when we will get fuel. Today we have used almost R1,000 worth of fuel from Beit Bridge to Rusape,” he tells me.

Is it really worth it? For me it is difficult to say. I paid R150 for my ticket to Rusape. The profit margins cannot be big, if there are any profits to be made at all. Expenses such as fuel and maintenance are exorbitant. The hours are long and the treatment unkind.

Still, in a country where people have become so used to economic hardships, it is something to cling on to.

It puts food on the table. DM

Published in conjunction with the Limpopo Mirror