Evicted occupiers of old age home still out on the streets 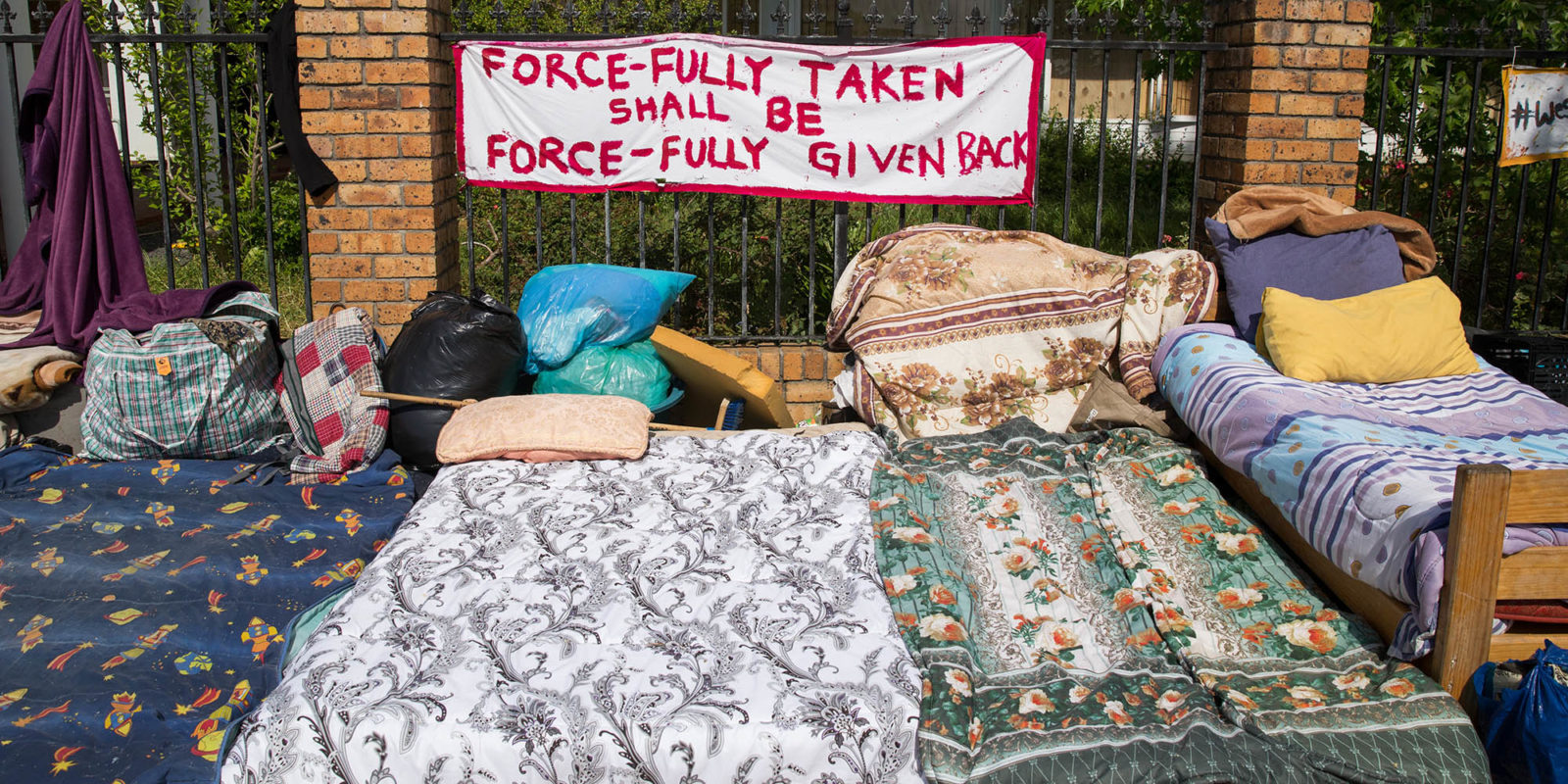 Occupiers of the Arcadia Place old age home in Observatory are hoping to take their case to the Supreme Court of Appeal. (Photo: Ashraf Hendricks/GroundUp)

The group is trying to raise money for tents and a court case in the Supreme Court of Appeal in Bloemfontein.

The strip of grass outside Arcadia Place in Cape Town is lined with mattresses and blankets and an array of people’s belongings, clothing and food.

A group of occupiers, called Singabalapha or “we belong here”, are preparing to spend their seventh night on the street outside the building in Observatory.

“It has been cold,” said Barbara Vuza, a spokesperson for the group. “We wake up to wet blankets and are worried that it is going to rain.”

Vuza said the occupiers included children and patients at Groote Schuur hospital for chronic health problems, such as asthma and tuberculosis, who are worried about staying outside for much longer.

The Arcadia Place building, which is owned by the Cape Peninsula Organisation for the Aged (CPOA), had been left vacant for renovations. On 17 September, while the building was vacant, a group of about 200 backyarders and shack dwellers began to occupy the space.

Two weeks later, on 2 October, the new residents of Arcadia Place were evicted after the Western Cape High Court dismissed an appeal by the residents against an eviction order.

A lawyer from PA Mdanjelwa Attorneys representing the occupiers then tried once again on 4 October to file an urgent application to appeal the eviction order, which was once again dismissed by the Western Cape High Court.

“We wouldn’t stay so long if there was any alternative,” said Vuza. “It’s not nice to live in the street, but it’s what is happening and you have to live with that.”

The Singabalapha residents are trying to raise about R15,000 to buy tents and an additional R15,000 to cover the legal costs of taking the case to the Supreme Court of Appeal in Bloemfontein.

So far, they have raised about R5,000 through donations.

“You don’t evict someone without an alternative place,” said Vuza. “That is why we are staying here. We know they are not supposed to throw us out on to the street.”

“To get houses and be nearer to the CBD, that’s the only thing that we want,” said Vuza.

It is unclear if the court order specified if alternative accommodation would be given to the residents. GroundUp was unable to obtain the court file from the Western Cape High Court to see the full order given, as the file had been transferred to a new judge after the second application on Friday, 4 October, and had not yet been processed.

“This is a private matter, and the City has no involvement,” said Janine Willemans, a spokesperson for the City of Cape Town. DM