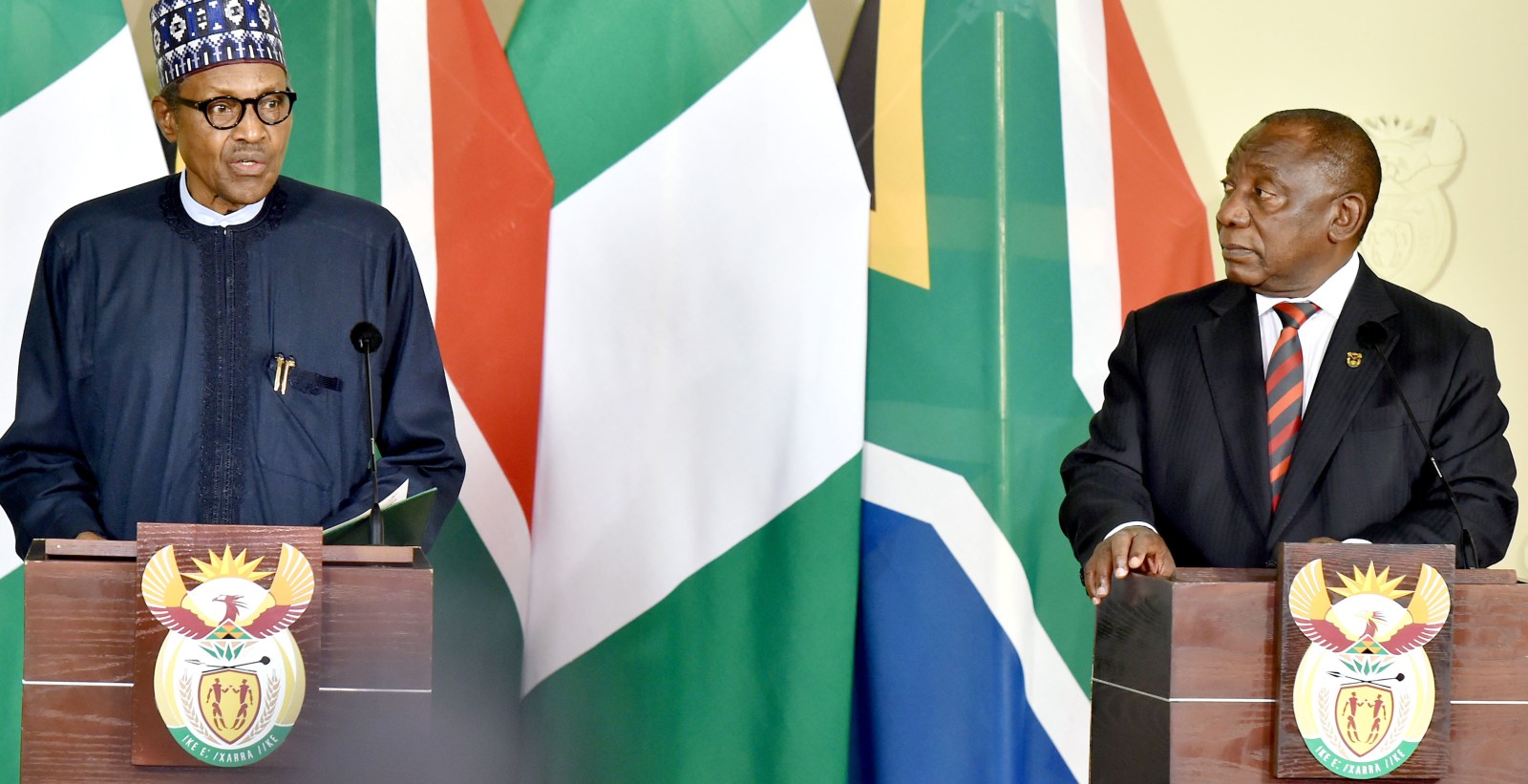 The Nigerian president was concerned about security at Gallagher Estate, sources said.

Nigerian President Muhammadu Buhari ostensibly came to South Africa to boost business ties between the two countries. But he missed a golden opportunity to drum up business by skipping a forum with business leaders because he was worried about security.

He was billed to appear with Ramaphosa but his security people checked out the venue of the forum – the sprawling convention centre of Gallagher Estate in Midrand – and decided on the morning of the event that it was not secure enough for him to attend, according to diplomatic sources.

One said there were no hard feelings from the SA government side – who found Buhari warm and friendly – just a feeling that he had missed a good opportunity to boost commercial ties between the two countries.

These took a knock during the recent eruption of xenophobic violence in South Africa, some of it directed against Nigerians and their businesses. Nigerian mobs retaliated in Nigeria by attacking the premises of South African companies such as Shoprite and MTN.

Buhari’s anxiety about security appears to be related more to tensions within the Nigerian diaspora rather than any fear of attack by South Africans.

While he was meeting Ramaphosa at the Union Buildings on Thursday, Tshwane Metro Police reportedly used tear gas and rubber bullets to disperse a handful of Nigerians – calling themselves Biafran nationals – who were demonstrating in front of the building. Some carried placards calling Buhari an imposter and demanding that Ramaphosa send him home.

They claim the “real Buhari” died in 2017, when Buhari was very ill and spent most of the year receiving treatment in London.

Self-styled Biafrans are calling for a separate state in southern Nigeria, trying to revive the movement which lead to the secession of several states to form the Republic of Biafra in 1967 in a region mostly inhabited by Igbo people.

That prompted a long civil war in which between 500,000 and two million Biafran civilians died before Biafra surrendered to Nigeria.

Another grievance of some expatriate Nigerians is the arrest in August this year of Omoyele Sowore, a Nigerian journalist and human rights activist. He ran against Buhari in the February presidential elections and was arrested after rejecting the election as rigged and calling for a protest tagged RevolutionNow.

When Buhari addressed the Nigerian community at a Pretoria hotel on Friday, some of his compatriots refused entry to the meeting were calling for Sowore’s release.

Rather ironically, even some members of Buhari’s own ruling APC party could not gain entry, because they were considered too radical, they told journalists.

A few Nigerians who were allowed into the meeting said Buhari spoke to them for about 10 minutes.

“Let me also call on Nigerians to be law-abiding and respect constituted authorities while you live here,” Buhari said, according to remarks tweeted by his office.

“May I also enjoin the few that sometimes give us a bad name, to desist from such misdemeanours and be our good ambassadors.”

This echoed his reply at a joint press conference with Ramaphosa after their meeting on Thursday to a South African journalist who asked him if he did not think the recent xenophobic violence in South Africa against Nigerians, among other foreign Africans, was partly prompted by the perception that they were involved in so much crime.

He said Nigerians understood the maxim that, “When in Rome do as the Romans do” and therefore obeyed the laws of their host country.

At the Pretoria hotel meeting, Buhari also assured his compatriots that he and the South African government had agreed on measures to tackle the xenophobic violence to ensure it did not recur.

Ramaphosa had told a press conference after meeting Buhari that these measures included establishing an early warning mechanism to pick up any signals of imminent xenophobic violence so steps could be taken to pre-empt it. He and Buhari also said that police and intelligence agencies in both countries would cooperate with each other, share information and raise levels of alertness to forestall such violence.

According to official sources, the Nigerian government is also concerned that Nigerian citizens in South African jails are not prevented from using their cellphones. Many of them continue to mastermind criminal activities in Nigeria from their South African cells, the Nigerians complained.

The South African government promised to look into this. It is not clear if the Nigerian government was referring, among others, to Nigerian oil militant Henry Okah who is serving a 24-year jail sentence in a South African prison after the High Court convicted him in 2013 on 13 terrorism-related charges over twin car bombings in Nigeria during the country’s Independence Day celebrations in 2010.

Ironically, given Buhari’s no-show at the business forum, he and Ramaphosa “welcomed the important role of the Business Forum which took place on the margins of the State Visit,” in a joint communiqué after their Union Building meeting.

They also welcomed the decision of the two governments to establish a Joint Ministerial Advisory Council on Industry, Trade and Investment which is expected to be critical in boosting private sector participation in the economies of both countries.

Ramaphosa said business and investment relations between the two countries were already strong and Nigeria accounted for 64% of SA’s trade with West Africa. The two governments had agreed to further strengthen economic ties by deepening their reforms to ensure their economies were more open to business and encouraging more Nigerian investment in SA.

He and Buhari noted the “significant footprint” of SA companies in Nigeria in sectors such as telecommunications, mining, aviation, banking and finance, retail, property, entertainment and fast foods.

By contrast, they also welcomed Nigerian business in SA but noted that it was mostly “small, micro or medium sized – with the exception of the big investment of Dangote Sephaku Cement.

At the press conference after their meeting, Ramaphosa said he would like to see a better balance in the investment relationship and would seek to achieve this by improving the environment for big Nigerian companies to invest here.

“We want to welcome more and more Nigerian businesses to operate in our space,” Ramaphosa said.

He added growing relations between the two countries were evidenced by the 32 cooperation agreements signed between them, covering a wide field including trade and industry, science and technology, defence, agriculture, energy, transport, arts and culture and tourism.