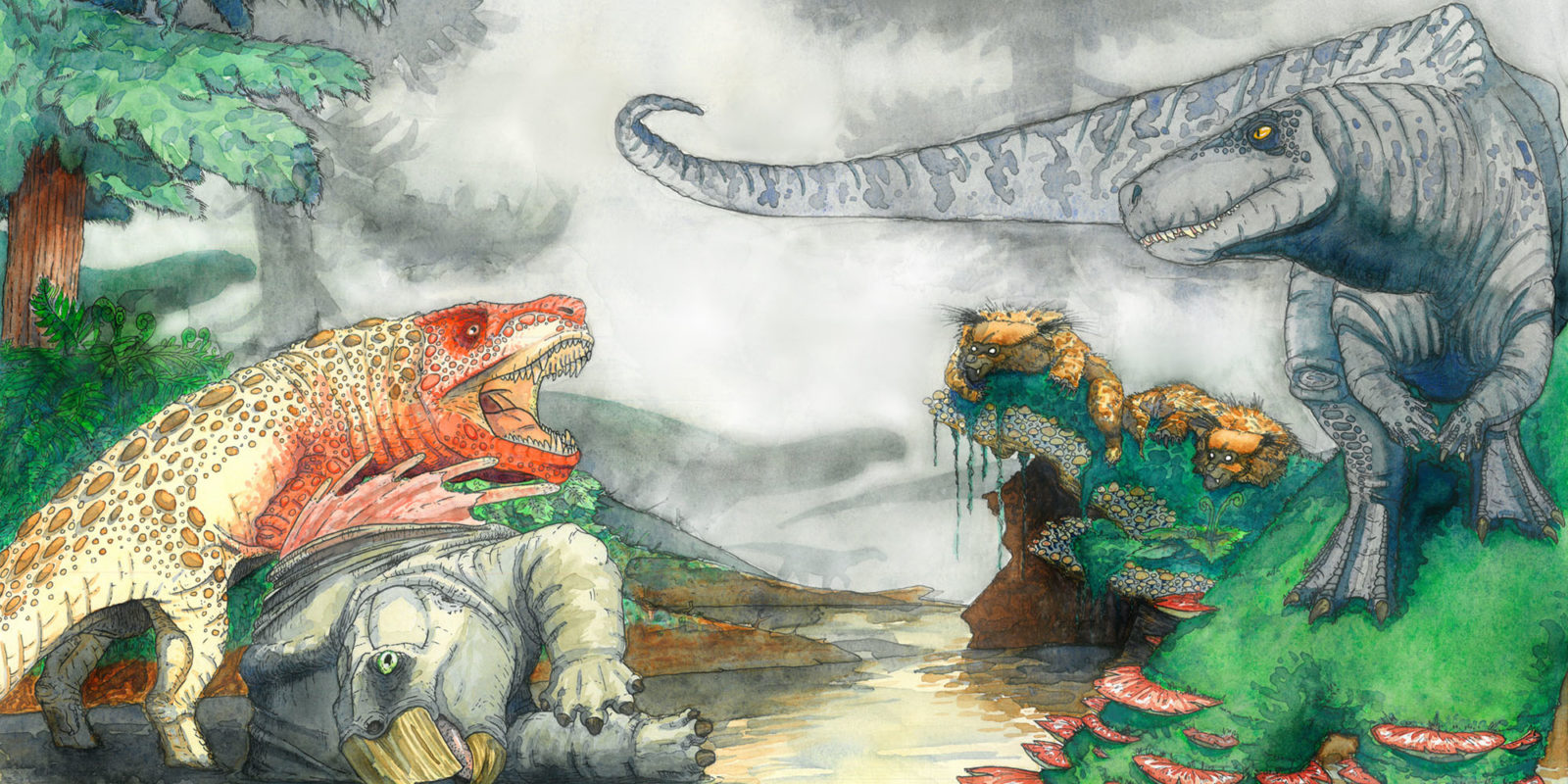 An artist’s reconstruction of two rauisuchians fighting over a desiccated corpse of a mammal-relative in the Triassic of southern Africa. In the background, dinosaurs and mammal-like reptiles form other parts of the ecosystem. (Image: Viktor Radermacher)

A masters student at the University of the Witwatersrand recently dusted off some old fossils and found that a crocodile ancestor killed and ate South African dinosaurs more than 200 million years ago.

Rick Tolchard, under the tutelage of comparative paleobiologist and all-round dinosaur lover Professor Jonah Choiniere, unearthed the revelatory fossils from the depths of university cases and museums across the country.

“The specimens were basically just collecting dust. No–one knew what they were, no–one could identify them,” Tolchard told Daily Maverick.

Until now. Tolchard has determined that the fossils, some of them first collected in the 1840s, belong to a group of ancient reptiles called Rauisuchians (pronounced row-a-su-kions).

The species lived in the Triassic period, approximately 210 million years ago, and died out during the period’s mass–extinction event.

Though they are related to modern-day crocodiles, Rauisuchians and the crocodiles that live in South Africa today are very dissimilar, according to Tolchard.

“What’s left of crocs on earth today is not a good representation of what their ancestors were,” said Choiniere.

Rauisuchians lived on land and walked on their hind legs, and there is evidence that they grew between five and ten metres tall. Like modern crocs, Rauisuchians had bony armour and were covered in scales, while their teeth were relatively similar to the teeth of today’s crocodiles.

Picture a modern-day crocodile, standing upright on its back legs, with its head squished forward, and you have a general idea of what Tolchard and other palaeontologists think Ruasuchians looked like.

“Living crocs today are totally different from their closest extinct relatives. Most of croc history is actually about being on land. There are plant–eating crocs in the fossil record; there are filter–feeding crocs that are like whales,” said Choiniere.

In fact, crocodiles came in myriad shapes and sizes, ranging from 10m Rauisuchians to tiny creatures the size of small dogs.

“We have fossils of crocs the size of chihuahuas downstairs, with long limbs. Imagine that running around,” Tolchard told Daily Maverick, laughing at the mental image of ankle-biter crocodiles with long, rickety limbs running around catching small animals.

According to Tolchard, discovering the ancient crocodiles in South Africa is not only interesting in itself but also tells a story of what the region’s ecosystem looked like just before one of the world biggest extinctions.

“Studying past extinctions is very important to help us understand the extinction we are currently living in,” said Tolchard. “Studying what happened millions of years ago helps us predict what might happen in the future, particularly at this moment in time.”

Today’s crocodiles are confined to the tropics and are not found in colder climates. But as recently as 50 million years ago crocodile ancestors could be found in what is now the UK.

Though the giant Ruasuchians did not survive the Triassic extinction, their current relatives appear primed to survive global heating. According to Tolchard, crocodiles will have to navigate habitat loss as rivers start to dry up, but they should be able to manage rising temperatures, unlike some other species.

“Crocodiles will be nett winners, polar bears will be nett losers. The penguins aren’t going to do too well either,” said Choiniere. Humans are also not well prepared for extreme temperature and weather changes.

Tolchard and Choiniere think it is important for people to understand that South Africa is not just home to the cradle of mankind but rather has much other weird and wonderful history dating back hundreds of millions of years.

“We have evidence of the first stages of multicellular life right up to the origins of humans,” Tolchard told Daily Maverick.

“We give public talks and people’s minds are blown by the fact that South Africa had dinosaurs; the average person seems to think we didn’t have dinosaurs, for some reason. They think fossils are reserved for other, “better” countries when in fact two-thirds of South Africa’s land surface has fossils on it,” said Choiniere. DM