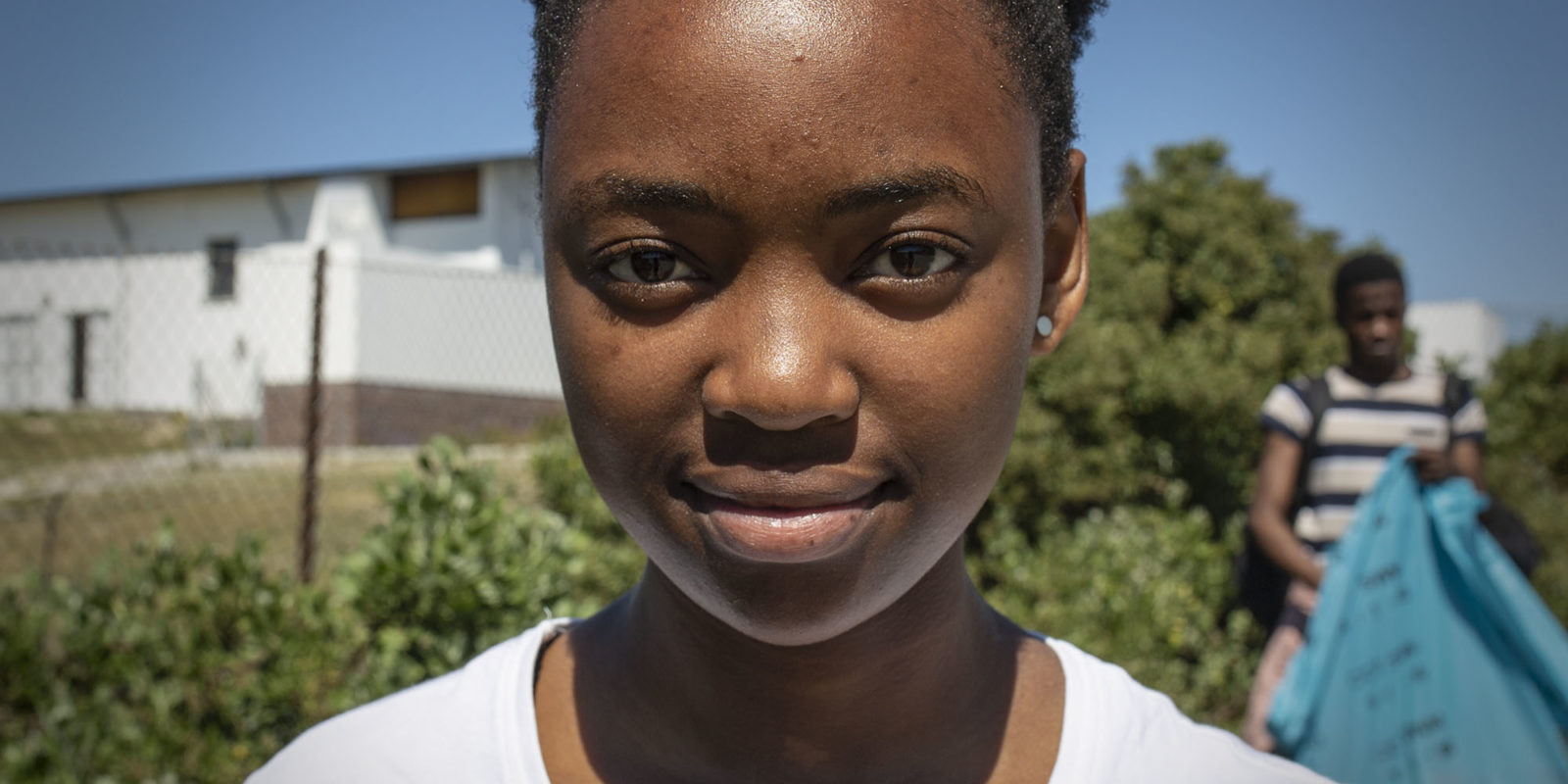 Ayakha Melithafa (17) from Eersterivier in Cape Town joined climate activist Greta Thunberg and others from around the world in signing a legal complaint to the United Nations Committee on the Rights of the Child on 23 September 2019. (Photo: Tessa Knight).

17-year-old Ayakha Melithafa from Eerste River in Cape Town joined Greta Thunberg and 14 other climate activists from around the world in signing a legal complaint with the United Nations Convention on the Rights of the Child on 23 September. Daily Maverick interviewed the young climate activist representing South Africa on an international stage.

“We do need more people of colour in the fight against climate change,” Melithafa told Daily Maverick two days after her story was included in a 100-page legal document holding high-carbon economies accountable for abusing the rights of children.

The indicted countries include Argentina, Brazil, France, Germany and Turkey. Notably missing is the world’s largest polluter and contributor to global warming, as well as the only country that has not ratified the UN Convention on the Rights of the Child – the United States.

A Grade 11 student at the Centre of Science and Technology in Khayelitsha, Melithafa became vocal about climate justice when in 2018 she joined Project 90 by 2030, an NGO working to cut the country’s carbon emissions by 90% by 2030.

After representatives from the African Climate Alliance, a pan-African climate justice group that organised Cape Town’s #ClimateStrike last week, came to visit her school, Melithafa decided to join them.

Speaking candidly with Daily Maverick, the 17-year-old said she did not want climate activism to be associated with people who could afford to live more environmentally-friendly lifestyles.

In reference to the cyclones that hit southern Africa earlier in 2019, and the fractional carbon footprint of the devastated countries, Melithafa said:

“The people that are often affected the most often don’t cause the problem.”

“I want people to know that not only privileged people are aware of climate change. They aren’t the only ones that experience problems. Many privileged people might be protesting because the quality of the water is getting bad, but people of colour have been drinking that water all along, and they feel lucky just to have water,” said Melithafa.

Access to water is an issue Melithafa feels deeply connected to. Although she lives in Eerste River and goes to school in Khayelitsha, Melithafa’s mother owns a farm in the Eastern Cape’s eMonti area, about 45 minutes outside East London.

In 2018 Melithafa’s mother, Nokulunga Sophazi-Melithafa, was able to plant crops on her land, but in 2019 she has not been able to. Water shortages threaten her income and the future of her farm and her family, and are a source of anxiety for the retired teacher and mother of five.

“Before, we knew what the weather was doing, but now we don’t know when the rain will come, so she is just looking after the farm animals. But with the drought some animals died, and it’s R16,000 for one cow so when they die we feel it,” Melithafa told Daily Maverick.

Some of her family and people within her close circle of friends also became ill during the drought after drinking dirty or unpurified water. She noticed that people had their water cut off, but could not afford to go to a store and buy bottled water.

Melithafa wants people in her community to join the fight against the climate crisis, but often struggles to mobilise those around her. In the past, she has run into climate denialism when trying to engage people on topics of climate justice. According to Melithafa, many in her community feel climate activism is not a top priority, which is why she invested in climate literacy and more involved climate curriculum.

The young climate activist had organised for a Khayelitsha community clean-up to take place after meeting Daily Maverick on 25 September, but was forced to cancel when only three people arrived.

“It’s very important for poor people and people of colour to go to these protests and marches because they are feeling the wrath of climate change the most. It’s important for them to have a say, for their voice and their demands to be heard.”

Before the global #ClimateStrike on 20 September, the African Climate Alliance organised transport for school learners from schools outside central Cape Town so that the protest was not only accessible to people who live in the CBD. For Melithafa, the accessibility of environmental action is integral to any demands for climate justice.

Although Melithafa’s signature was on the document handed over to the UN in New York earlier this week, the teenage activist was not able to be there. She did not have enough time to organise a passport and visa to attend the UN Climate Summit after she had been asked to represent South Africa.

“I was bummed that I didn’t get to go to New York, but going to New York is not really the point — the point is that South Africa was part of it and we were represented. Now our government also needs to do something, because we’re holding others accountable.” DM