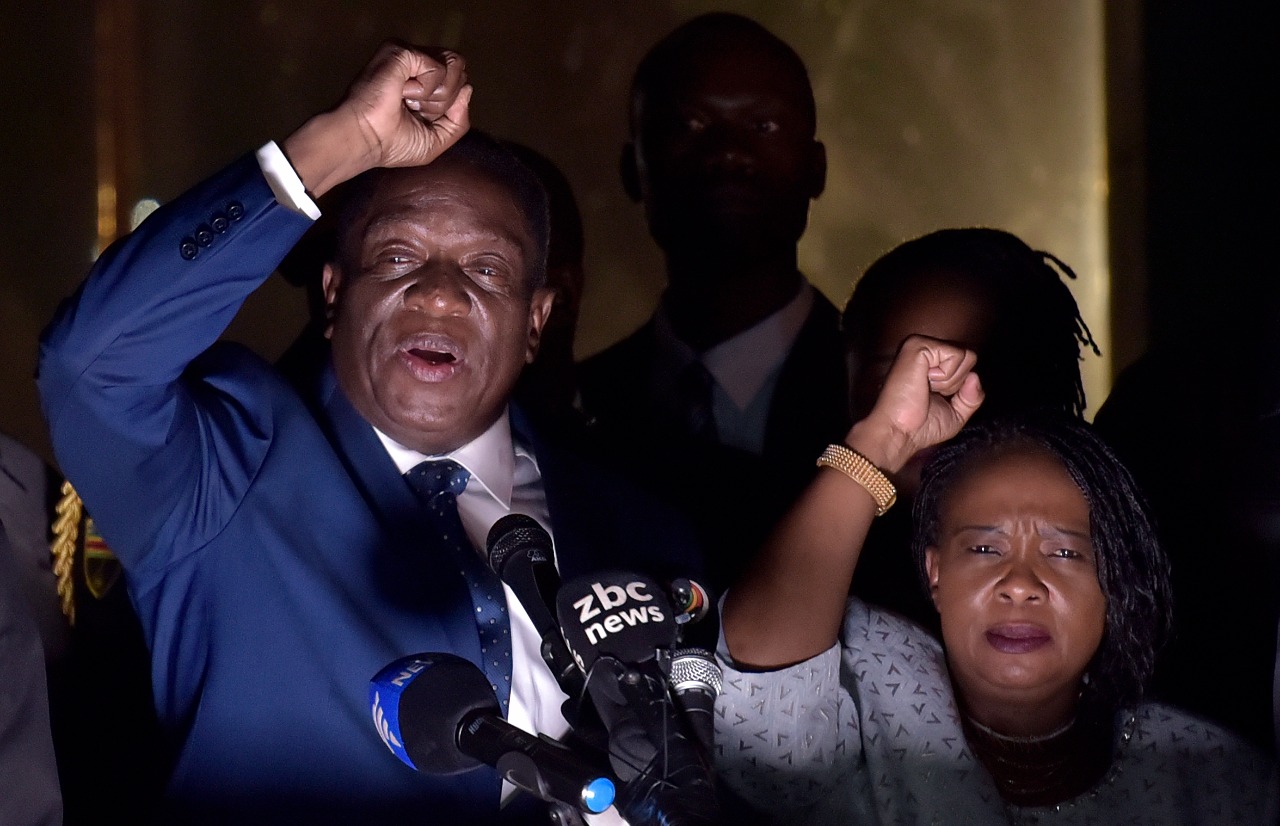 President Emmerson Mnangagwa with his wife Auxillia addressing the people of Zimbabwe at the Zanu-Pf headquarters on November 22, 2017 in Harare, Zimbabwe. (Photo by Gallo Images / Netwerk24 / Felix Dlangamandla)

The awarding of an 'honorary ambassadorship' to Zimbabwean President Emmerson Mnangagwa’s wife, Auxillia Mnangagwa, has caused an outcry from his detractors. It comes at a time when his government is being accused of using harsh methods to clamp down on a doctors’ strike.

Zimbabwe is buzzing about Harvard Medical School’s Global Health Catalyst naming as special ambassador Auxillia Mnangagwa, who is the founder of the Angel of Hope Foundation and who also happens to be married to Emmerson Mnangagwa, Zimbabwe’s president. The foundation is “built of the strong African Traditional and Christian values of love and unity” and is aimed at improving the lives and health of “vulnerable” groups by focusing on issues like, among others, fighting HIV/Aids, cancer, child abuse, early marriages, and drug abuse.

Harvard’s Global Health Initiative said on its website that it would collaborate with Auxillia Mnangagwa “to increase access to cancer prevention and control in Zimbabwe and reducing healthcare disparities”. Over the weekend she met faculty members, including Global Health Catalyst Director, Doctor Wilfred Ngwa, ahead of the United Nations General Assembly in New York to discuss these collaborations, which include developing an app to provide peer support for cancer patients, and a “point-of-care holographic platform” for cervical cancer screening. A Global Healthcarc summit will also be organised in Zimbabwe aimed at “reducing global health disparities”.

Detractors of Zimbabwe’s current government, however, say this is nothing more than “ivory-washing” her name, and by extension also that of her president husband, in a country where the healthcare is so poor that those who can afford it leave the country when they need to seek proper care. Former president Robert Mugabe, who died earlier this month in a Singapore hospital, was one of the most famous travelling patients.

Lawyer Fadzayi Mahere, who stood as a candidate during the 2018 elections but lost, tweeted: “No amount of Harvard awards facilitated by the dubious PR firms [reportedly employed by President Mnangagawa] can whitewash the abduction of Peter Magombeyi by the regime. The Zimbabwean Govt is a gift that keeps on giving when it comes to reaching the rule of law & violating human rights. They can’t be sanitised.”

A number of former American diplomats, including at least seven retired ambassadors, have now written to Ngwa to ask Harvard to rescind this ambassadorship.

“To be blunt,” the diplomats wrote, “your well-intentioned work in these areas [of women’s health] are tainted by the affiliation with Ms Mnangagwa and her direct personal connection to an increasingly corrupt and abusive administration in which tolerance for dissent is non-existent and democratic rights are violently denied.”

They referred to the alleged abductions reported by domestic and international human rights organisations of at least 50 government critics and activists, most recently, and ironically, that of a medical doctor, Peter Magombeyi. As president of the Zimbabwe Hospital Doctors’ Association, he was leading protests for better wages for health workers when he “disappeared” on 14 September, the night of Mugabe’s official funeral service. He surfaced five days later at the side of a road, disorientated and allegedly suffering from torture. His attempts to travel to South Africa for medical treatment for suspected liver damage have been blocked by riot police, with human rights campaigners saying that authorities feared that an examination by South African doctors would reveal that Magombeyi was tortured.

The American diplomats said the kind of honour bestowed on Auxillia Mnangagwa should be “reserved for those who are truly deserving of such recognition”. They wrote: “Too often, repressive regimes will use international institutions, like Harvard University, to launder their oppressive practices and overall reputations.”

In Zimbabwean newspapers, full-page advertisements have been bought by business and organisations to congratulate Auxillia Mnangagwa.

In a separate development, the Merck Foundation is also collaborating with her “to break the stigma around infertility in Zimbabwe and the rest of Africa” in the “Merck More than a Mother” campaign. This campaign is to prevent women solely being blamed for infertility. Last week Merck provided media training in the Zimbabwean capital Harare to help raise community awareness around the issue.

The Merck Foundation and Harvard Global Health Catalyst did not immediately respond to a request for comment. DM