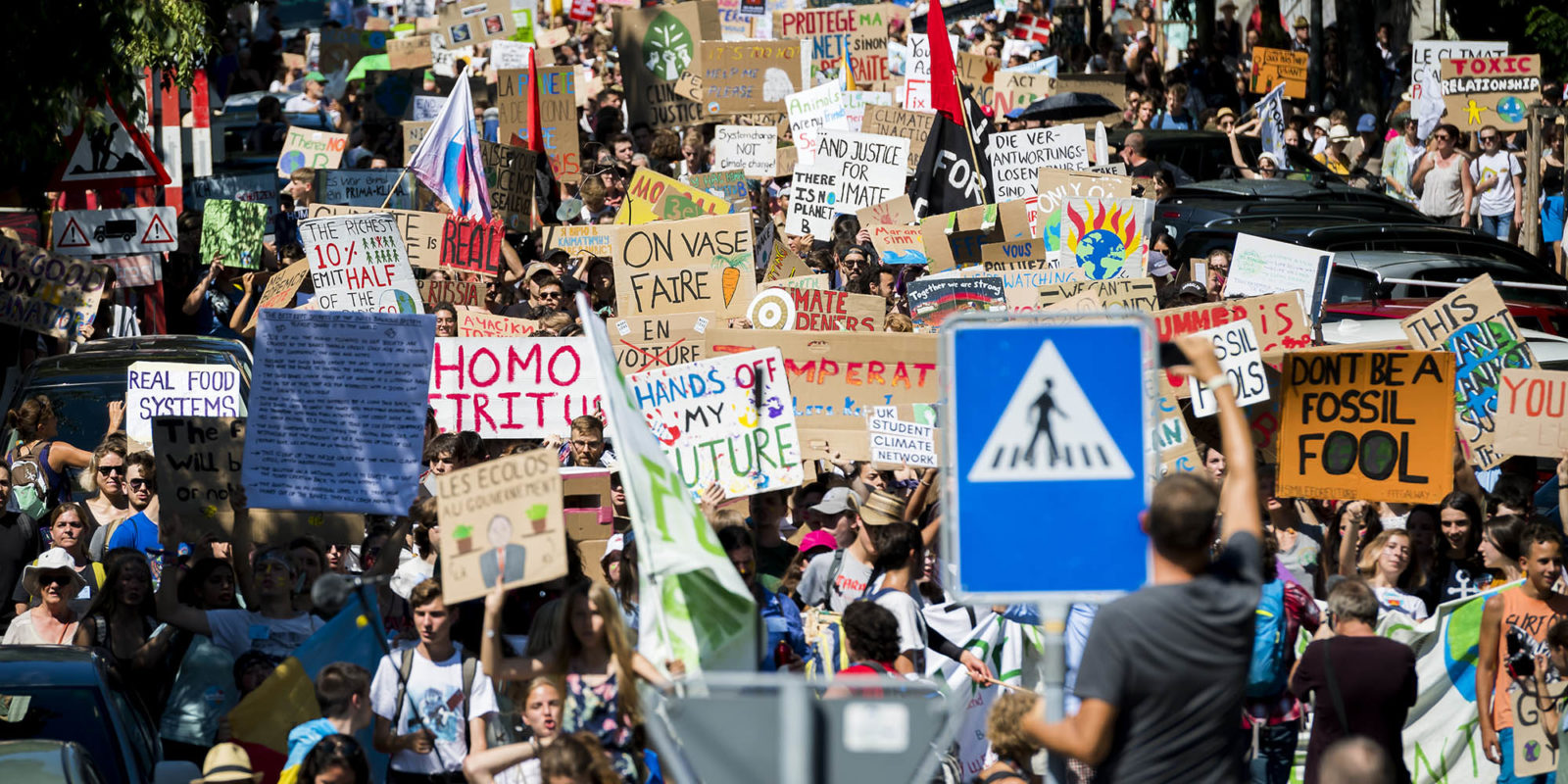 Young climate activists take part in a demonstration against climate change on the closing day of the Smile for Future Summit for Climate in Lausanne, Switzerland, 09 August 2019. (PHOTO: EPA-EFE/JEAN-CHRISTOPHE BOTT)

On 20 September 2019, to coincide with what is likely to be the largest global mass action event in the arc of human history, climate strikes will take place in 18 cities and towns across South Africa. Which is just as well, because on the evening of 18 September the United Nations placed our government in the company of climate rogues.

The lead story on Sasol’s “society” homepage, in a week when millions of human beings in 137 countries are gearing up for the largest climate protests yet, focuses on Qatar. Under the strapline “environmental care”, the South African fossil fuel giant is inviting readers to explore the “remarkable biodiversity” of the Arabian Gulf state. Sasol, it turns out, has partnered with an organisation called Friends of the Environment to produce a “state-of-the-art, interactive and multimedia mobile phone app and website”.

Apparently, the Qatar e-Nature app is “award-winning”. Also, it is available “for free” on Android, iOS and Windows platforms. In 2018, we are told, pupils from more than 100 Qatari schools took part in a contest that “tested their knowledge of plants, mammals, insects, reptiles, birds and marine life” in the oil-soaked nation, an initiative based entirely on the images and text in the app.

How does the fallout from the burning of fossil fuels affect the flora and fauna in Qatar’s actual offline ecosystems? Sasol doesn’t say. What’s the point of teaching kids the names of things that are being choked to death by the country’s record-breaking levels of air pollution? Again, Sasol gives us nothing. Why does Sasol even care about Qatar? Once again, crickets.

But there is, it seems, something that Qatar and Sasol have in common — where the former is the largest C02 emitter per capita on Earth, the latter owns and operates the single-largest point source of carbon emissions on Earth, being the infamous coal-to-liquid plant in Secunda, Mpumalanga, which is based on technology developed by the Nazis and perfected by the apartheid regime.

For such remarkable tone-deafness, as well as for the 67 million tons of C02 it spews into the atmosphere every year — a figure that renders it a carbon criminal on par with Oman, another oil-soaked Gulf state — the Sasol head office in Sandton, Johannesburg, has been chosen as a major site of protest for 20 September. The posters that advertise the march invite students from Wits University to “confront carbon capital” and ask the rest of the public to join “a human chain for climate justice” on the periphery of the building. 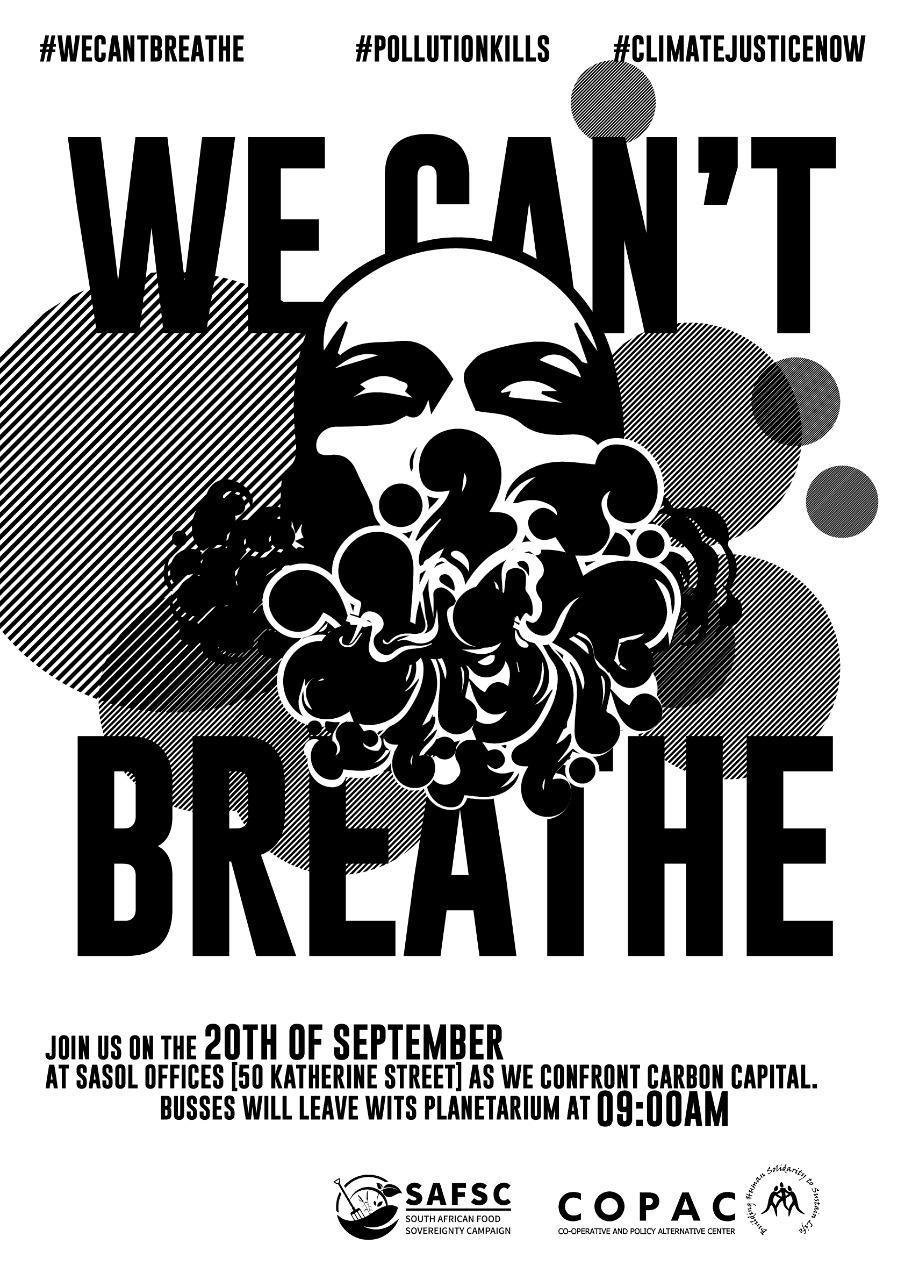 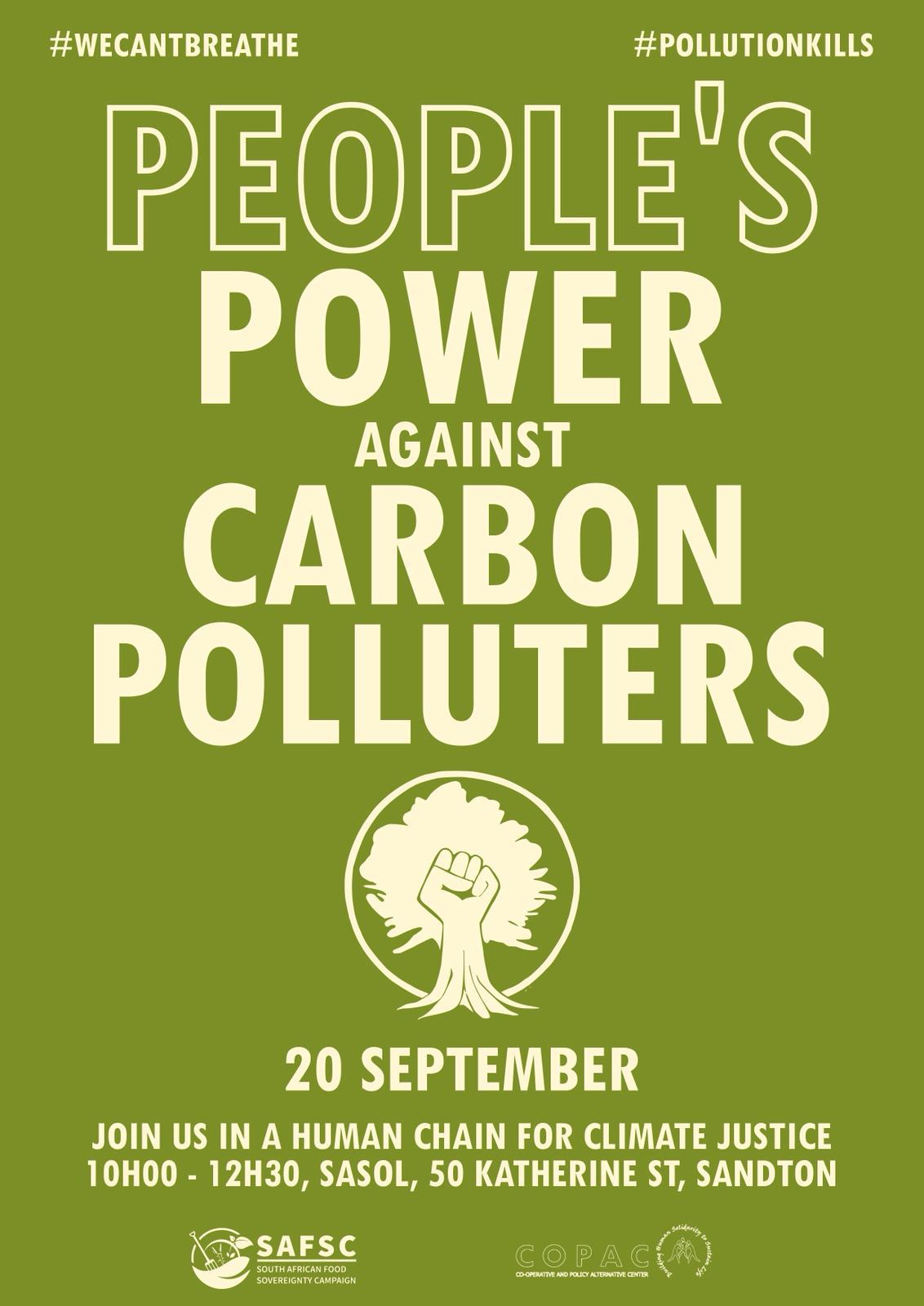 The hashtags across the top of both posters are instructive: #wecantbreathe and #pollutionkills. This, of course, is a reference to the “Deadly Air” matter lodged in the Pretoria High Court in June 2019. The pivotal fact in this landmark case, which names President Cyril Ramaphosa as a respondent, is that the South African government has known about the lethal levels of air pollution on the Mpumalanga and east Gauteng Highveld since at least 2007.

In that time, with an international expert calculating an early death toll in the region of at least 650 a year — mortalities caused by lung cancer, heart disease, chronic obstructive pulmonary disease, strokes and lower respiratory infection — it has done nothing to call the polluters to account.

But if Eskom and Sasol have (literally) been allowed to get away with murder, why not take the protests to a body politic that’s been looking the other way?

Of the 18 climate protests planned for 20 September across the length and breadth of the country, from the big cities to Graaff-Reinet in the central Karoo to the drought-stricken Eastern Cape towns of Makhanda and Mount Frere, many will do exactly that. Cape Town protesters will meet on the corner of Cambridge Street and Keizergracht in Zonnebloem to deliver a list of demands to the government that includes the official declaration of a climate emergency, the halting of all new fossil fuel projects, the conversion of the energy sector to 100% renewables by 2030 and the creation of a mandatory education curriculum for all South African schools on climate change and its effects. 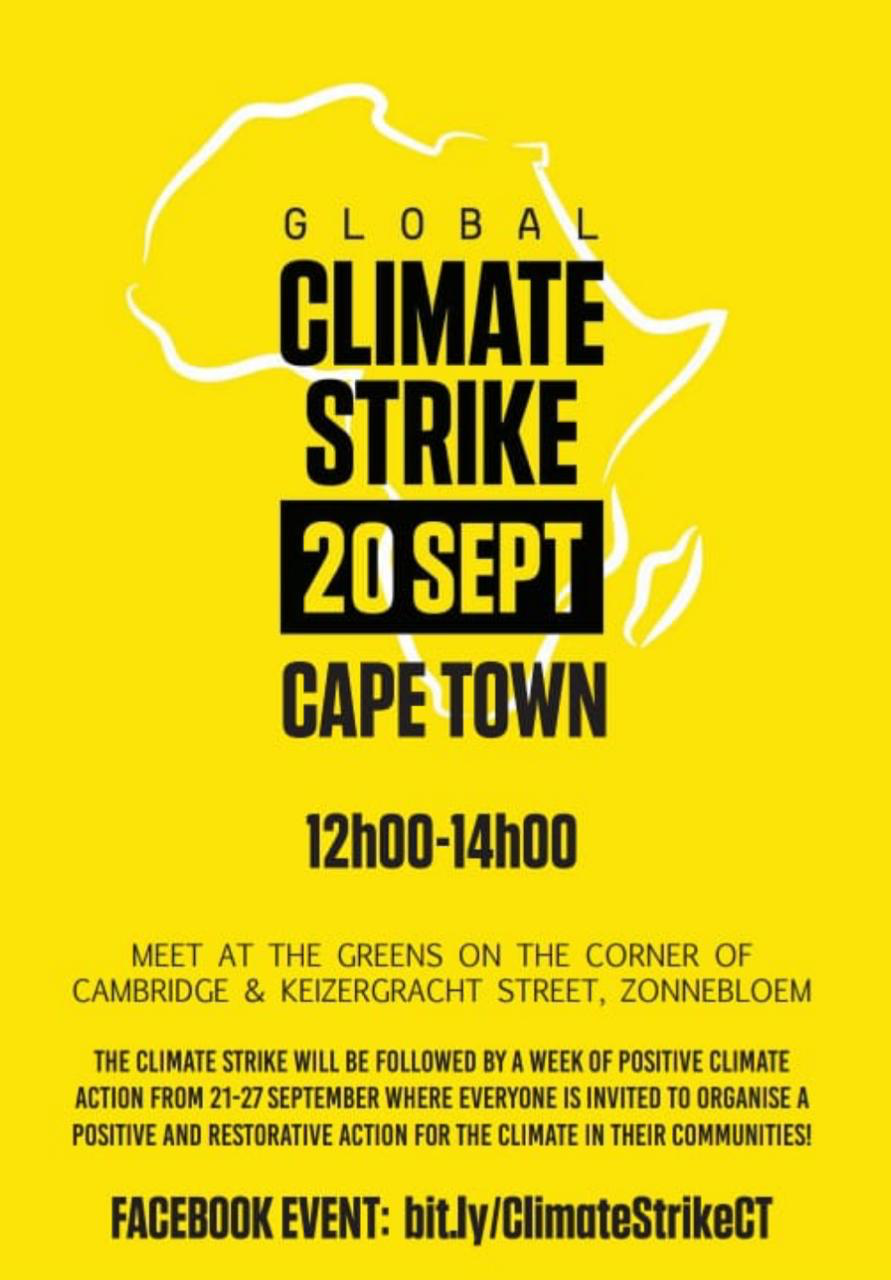 “The fight for social justice and environmental justice is the same fight,” notes the South African office of 350.org, the world’s largest climate activist NGO, with respect to this march.

“We cannot solve any other social issue if we do not have a liveable planet with access to safe, clean drinking water and food.”

Like the Co-operative and Policy Alternative Centre (Copac), which is behind the siege of Sasol, the organisers of the Cape Town march have done their homework — South Africans, whose nerves have been shot by intense mass actions against femicide, xenophobia and non-existent service delivery, won’t turn up for the climate strikes unless they get how it affects them personally.

In this sense, as Daily Maverick’s Our Burning Planet has been at pains to point out, it’s darkly convenient that the corporations poisoning our soil, air and water also happen to be the corporations driving climate collapse. Beyond such expediencies, though, there are other reasons for taking the fight to South Africa’s largest oil company, all of which are archetypal of the climate justice movement at large.

“First,” says Copac’s Vishwas Satgar, “we are trying to address the weaknesses of the UN multilateral processes that have not been able to change the behaviour of the carbon criminals. Second, we want Sasol to put a just transition plan on the table that sets out how it is going to shut itself down, so that we as a country can get to zero emissions. Third, we are raising awareness about the role of carbon capital in causing global heating.”

It’s a tall order, particularly on the second point, but then the elite-to-grassroots momentum that’s been gathering around the strikes is in every way unprecedented. Even the uber-plutocrat Bill Gates, in an interview with David Wallace-Wells of New York Magazine, has just conceded that there’s nothing worthy of the word “plan” when it comes to how governments are tackling the crisis.

In South Africa, which is warming at twice the global average, less than 20% of the population is aware of the existential threat — a statistic, according to Satgar, that begs for this opportunity created by global citizen action not to be squandered.

Which, presumably, is why the other major protest in Johannesburg on 20 September, planned for kick-off at 10am at Pieter Roos Park on Empire Road, is a collaborative effort between Earthlife Africa, Greenpeace Africa, 350 Africa and GenderCC. 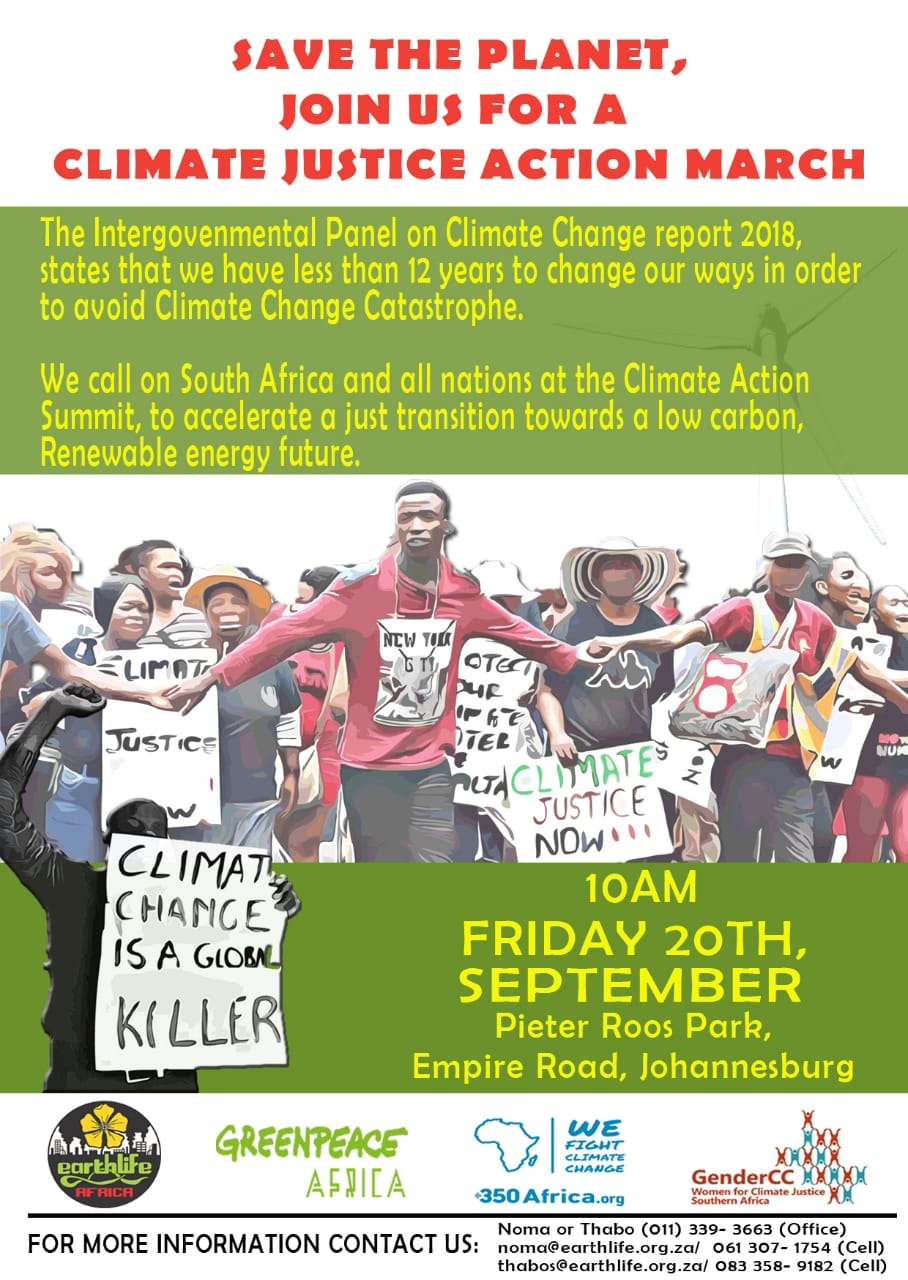 This march is expected to be joined by members of Saftu and Fedusa, local trade union federations that have endorsed the international strikes. Among the recipients of the marchers’ demands will be the South African delegation to the UN Climate Action Summit in New York on 23 September — the core demand, it seems, is for the government to commit to action that limits global heating to 1.5°C above pre-industrial levels.

There are two disheartening challenges here, the first of which came to light on the evening of 18 September, when it was revealed that South Africa, along with Japan and Australia, would be denied a speaking part at the New York summit. The zero-tolerance approach is a function of the decree that has just been handed down by UN secretary-general Antonio Guterres, who declared that all countries attending the summit must stop building new coal power plants, reduce their fossil fuel subsidies and commit to net zero emissions by 2050.

Aside from the delicate matter of Medupi and Kusile, the mammoth coal-fired power stations whose exorbitant and heavily subsidised budget overruns have helped to bankrupt Eskom — which, at 205 million tons per annum, emits almost as much carbon as the United Arab Emirates — the South African delegation appears to be suffering the consequences of its behaviour at the recent UN climate talks in Bonn.

In late June 2019, as Daily Maverick reported, our team of 33 delegates at the talks were hiding a “secret” and “confidential” memo that instructed them to refrain from committing to the Intergovernmental Panel on Climate Change’s landmark special report on global warming of 1.5°C.

The IPCC report, a collaboration of 91 climate scientists from 40 countries, lays out in devastating detail how modern nation-states begin to lose their ability to cope with extreme weather events, food and water shortages, civil conflict, breakdown of infrastructure and mass migrations at levels of heating above 1.5°C. And so the other disheartening challenge faced by the protesters who take their cue from the report is the list of names who now believe that the 1.5°C target is unachievable — a list that includes the techno-optimist Bill Gates, the former chair of the IPCC Sir Bob Watson, and the publishers of Nature magazine, who green-lighted a paper in July 2019 that shows how we’re already locked into carbon emissions that take us way beyond the threshold in the short-term.

Still, the apparent hopelessness of the situation, as articulated by the novelist Jonathan Franzen in the New Yorker, is no reason to sit at home and wait for the apocalypse. Although Franzen took major flak for his remarks, his message wasn’t all that different from the writer Derek Jensen, a cult-like figure among environmentalists and naturalists.

And if that sentiment doesn’t get South Africans to skip work or school and join one of the 18 climate strikes on 20 September, maybe a message closer to home will.

“Graaff-Reinet is crippled by the climate crisis,” it states on the poster that advertises the Karoo action for climate justice. “We are running out of water!” DM 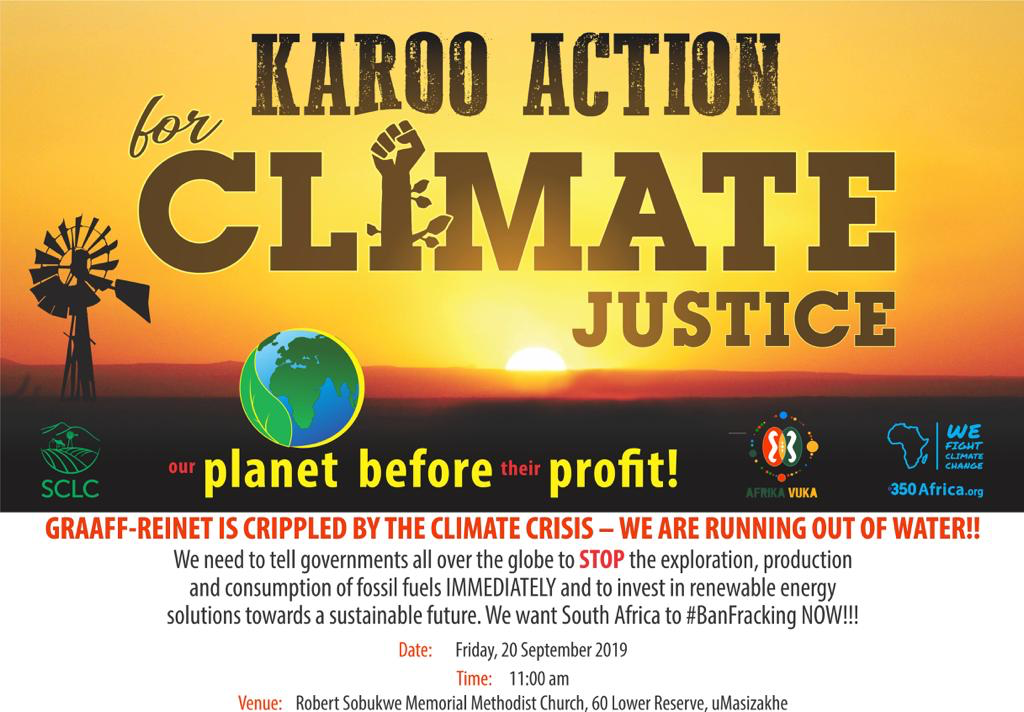