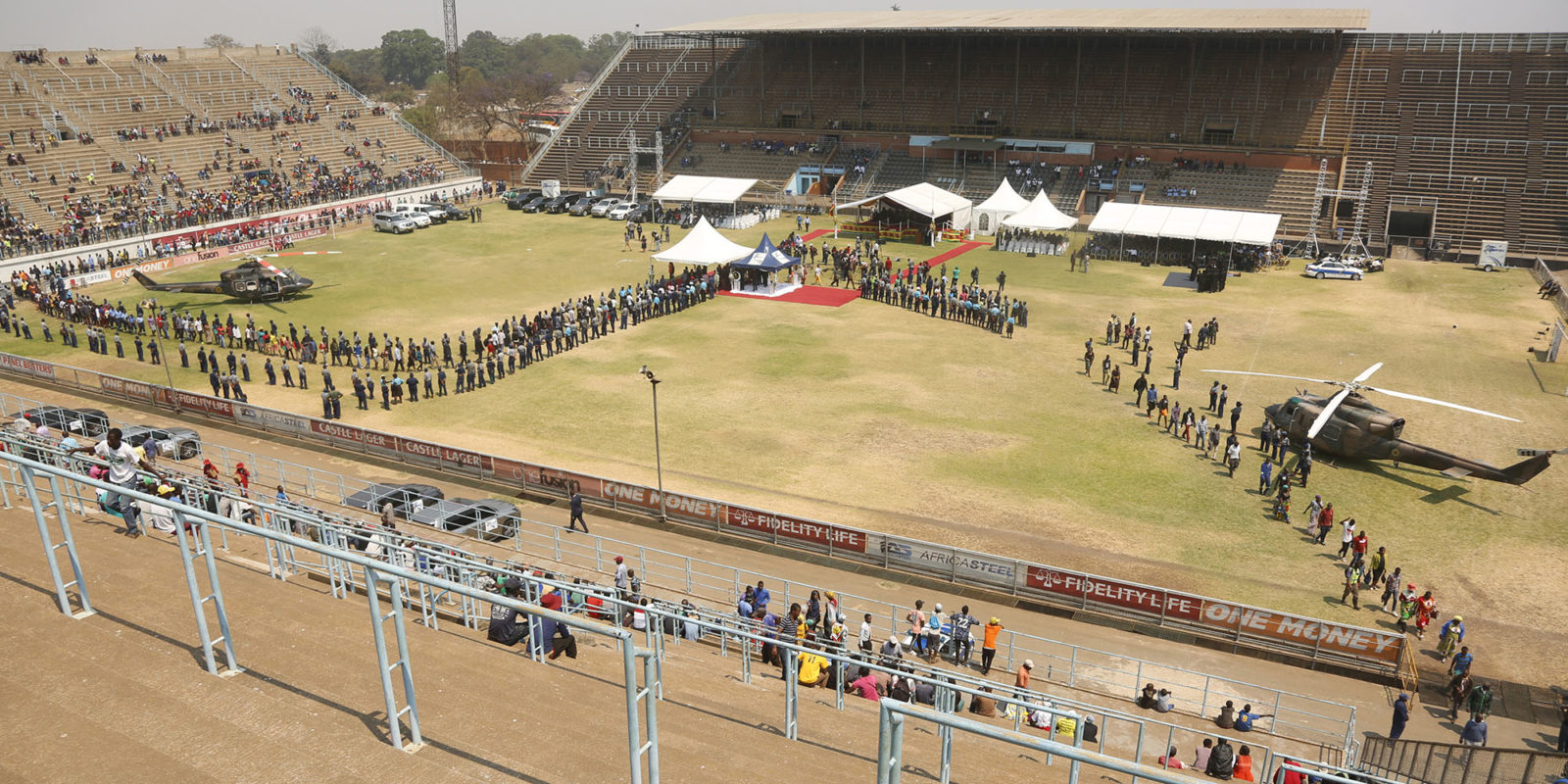 Members of the public queue inside the stadium at the public viewing of the body of late former Zimbabwean president Robert Mugabe in the coffin as it is lying in state in Harare, Zimbabwe, 13 September 2019. Mugabe passed away on 06 September aged 95 in Singapore where he had been receiving treatment since April this year. Mugabe led the country post-independence from 1980 to 2017 when he was ousted in a military coup. The public will be able to pay their respects to Mugabe on 12 and 13 September in Harare before his burial on 15 September. EPA-EFE/AARON UFUMELI

Former Zimbabwean president Robert Mugabe’s official memorial service in Harare was one of contrasts as a continent ambivalent about his legacy gave him a send-off marked with both a whimper and a few bangs.

Filling the 60,000-seater National Sports Stadium in Harare has always been a tough ask, but you’d think the death of one of Africa’s great liberation icons would have drawn the crowds. After all, Robert Mugabe’s name was mentioned by President Emmerson Mnangagwa in the same breath as historic pan-Africanist founding fathers of independent states: former presidents Agustinho Neto (Angola), Sir Seretse Khama (Botswana), Samora Machel (Mozambique), Julius Mwalimu Nyerere (Tanzania) and, the only survivor now, a frail Kenneth Kaunda (Zambia), who was the only leader to be driven into the stadium, directly to the VVIP seating.

But on Harare’s roads there wasn’t much gridlock at all on Saturday morning. People entered the stadium in a trickle, rather than a stream. Police officers and soldiers conspicuously kept the peace and warded off possible security threats and embarrassments. Eleven African heads of state were expected (nine came) and just over a dozen other dignitaries – representatives of heads of state and special envoys and former heads of state – attended.

There was no barrier separating the shiny, luxury VVIP rides from ordinary members of the public who arrived in the dozen or so special buses parked just outside the stadium, or by public transport or with their own transport. Food sellers with wares ranging from cold drinks and popcorn to deep-fried chicken pieces and liver, sausages, chips and boiled cows’ heels, however, complained that they weren’t allowed to sell inside the stadium perimeter as usual, and said this made business slow. An old, large green prisons truck was parked menacingly near one of the entrances, but it’s not clear if it found a use.

The atmosphere among the few thousand people who did turn up – the stadium never was more than a quarter to a third full at any given time – was that of a celebration, even a political rally. In the stands were twerking women in Zanu-PF kangas not far from the block where a large group of white-clad women from the Apostolic Church sat. A few metres from the choir stand on the field, two young men in suits performed an energetic vosho dance to cheers from the flag-waving crowds. Some people brought picnic baskets of bread, oranges and bottles of cold water or cold drinks, and children came along too. Hardly anyone resembled “mourners”, as the black-clad dignitaries on the shaded stage referred to the crowds.

Those in attendance wore bright Zanu-PF colours in T-shirts and wraps with either the face of Mugabe or Mnangagwa, the man who forced him from power. Nowhere do the two former allies share a garment, though. Following the November 2017 non-coup – officially referred to in Zimbabwe as a “resignation” – staunch Mugabe supporters would defiantly wear clothes bearing his face. At the funeral, the symbolism of such garments was less loaded.

Organisers of the official memorial on Saturday took care to emphasise that, even though heroes of Zimbabwe’s liberation are always afforded a fitting send-off, Mugabe’s funeral was “the first of its kind” and intended to show “the highest respect”.

Large banners sponsored by funeral parlour Doves paid tribute to Mugabe – who defied all the natural odds by clinging on to power until the age of 93 – proclaiming “A legacy serving a nation”, “Hamba kahle, Gushungo”, “Lala ngokuthula”, “Rest in peace, Gushungo”, and “Farewell son of the soil”.

Speeches were made by Equitorial Guinea’s President Teodoro Obiang Nguema Mbasogo, who was one of the last leaders to visit Mugabe a few days before his death, and who has been in power since 1979, a year before Mugabe took office; former Ghanaian president Jerry Rawlings, who claimed Mugabe as Ghana’s son-in-law because his first wife, Sally, was from there; Kenya’s President Uhuru Kenyatta, who announced three days of mourning after Mugabe’s death; and South Africa’s President Cyril Ramaphosa, whose governing ANC benefitted from Zimbabwe’s support during the struggle.

All praised Mugabe as a pan-African hero, and omitted to mention the hardships under his rule, such as the bloody Gukurahundi clampdown in the 1980s, and the hyperinflation after the turn of the century. This year a drought in the region, a frayed economy and a run-down country have resulted in 18-hour-a-day power cuts and rising prices, making it even more challenging to eke out a living in Zimbabwe. Many of those in Harare – an opposition stronghold – who did not attend the funeral laughed when asked why, saying they had other business to tend to or they had to go to work to make money. “It was bad under Mugabe,” a security guard said, but confirmed it’s worse under Mnangagwa. He’s unsure if it will get better. “Politicians and their promises …,” he said.

Mnangagwa was always going to have to manage Mugabe’s funeral carefully, especially since the elderly leader expressed unhappiness about being forced from power in a transition that was never officially recognised as a coup d’etat by the African Union.

At the memorial service, his nephew, Walter Chidhakwa, in an emotional speech, said Mugabe was a “sad man” towards the end of his life, and in a conversation had “recalled the journey he had walked, a profound journey, a hard and excruciating journey”.

A month before his death the Zimbabwe Independent reported family sources as saying Mugabe didn’t want Mnangagwa to preside over his funeral and he didn’t want to be buried with other former leaders and liberation fighters at the Hero’s Acre, visible on a hill from outside the National Sports Stadium, but in a private space, next to his mother Bona at his rural home in Zvimba, about 80km outside Harare. In the days leading up to the memorial, plans for Mugabe’s burial kept changing, and by Sunday 15 September there were conflicting messages about where his body was being kept. The last word from Mnangagwa was that Mugabe would be buried inside a mausoleum at Hero’s Acre, which would take about 30 days to construct.

Mnangagwa’s young supporters were at the funeral in full force, and made the radical kind of noise that would attract the stadium’s attention to them.

“Thank you Cde ED [Mnangagwa] for not neglecting Mugabe”, “Cde Mugabe our hero”, and “G40 go to hell leave us alone”, their posters read – with G40 referring to Mugabe loyalists, including his wife Grace, who is bitter with Mnangagwa. There were also posters condemning sanctions from the West.

In an article in 2018, Zimbabwean political analyst, Derek Matyszak, who is now governance consultant with Veritas, said it was important for Mnangagwa to keep Mugabe close so as not to give ammunition to those who want to describe the 2017 “military-assisted transition” as a coup. Also, he didn’t want to earn antipathy from many people – including other African leaders – who still see Mugabe as a liberation icon. Mnangagwa was also Mugabe’s close ally and enforcer for decades, and is closely associated with many of Mugabe’s policies. “Mud slung at Mugabe would inevitably boomerang,” Matyszak wrote.

Mnangagwa, for example, emphasised during his speech on Saturday that Mugabe’s controversial land reform programmes would “never be reversed” because they benefited more than 365,000 families. At the same time he said Zimbabwe was about to make a fresh start.

Would Mnangagwa’s efforts ward off possible future Mugabe nostalgia? Matyszak said many ordinary people didn’t really know the causes of the current economic meltdown and might claim that things were better under Mugabe.

“The [opposition] MDC will milk this for all they can and hope the meltdown will force Mnangagwa into talks that will put [its leader] Nelson Chamisa into government – for which reason the last thing the MDC want to see is the economy recover or any bailout from the West.”

Weary Zimbabweans might be laying Mugabe’s body to rest, but his ghost is set to haunt them for a while longer. DM

Iziko employees to continue protest after talks with management fail