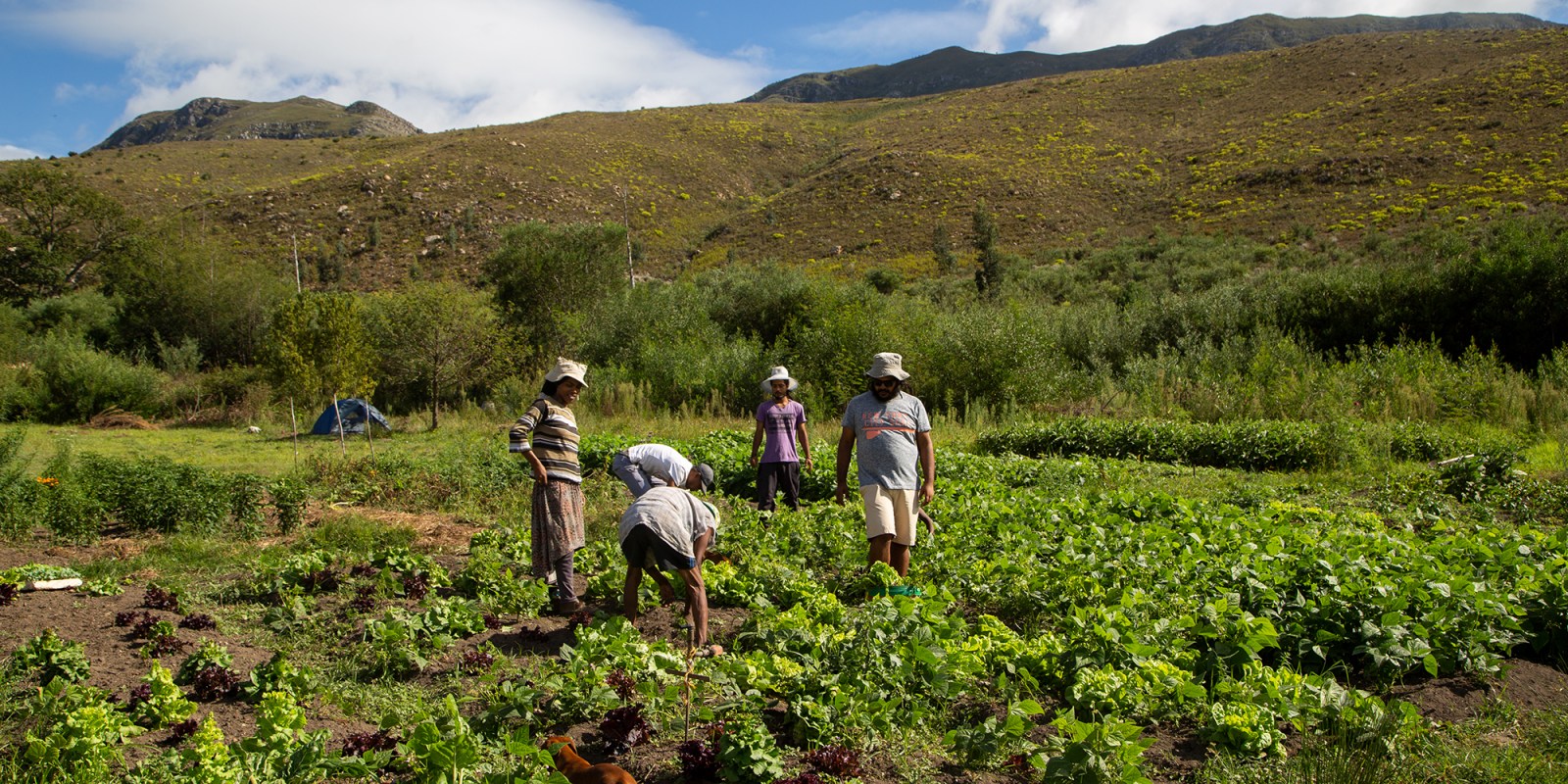 Samantha Jansen and her husband, Fabian, have been subsistence farmers in the Overberg region, Western Cape producing a mix of livestock and produce for the past eight years. Photo: Aisha Abdool Karim

It’s clear that changing our eating habits and how and where we grow food is not a luxury choice but a matter of survival. In this article, veteran justice activist Sandra Perry, the founder and Director of Neighbourhood Organisation for Agriculture at Homes and Schools (Noahs) Inc, describes her own journey and the pitfalls and possibilities for urban agriculture.

In January 2019, a report published by the Lancet Commission on Obesity, Undernutrition and Climate Change marshalled the best evidence to reveal that the explosion in meat consumption, and our insatiable demand for more, has ‘destabilising effects on deforestation, species extinction, and climate change acceleration’.

When you are living a life of relative aloofness, you can easily believe that the determination of food pricing and control are best left to an economist or an agriculturist. That is, until your life circumstances experience an upset that makes you acutely aware of who actually controls the demand, supply and source of our food.

My aloofness was challenged when my vegetarian household was plunged by economic circumstances into group buying our vegetables from the city’s fresh produce market and starting to grow our food in a suburban backyard garden in Observatory, Johannesburg.

It started as an attempt to raise an income while also being forced by economic circumstances to home-school our two pre-teen sons in 2014-2015. We approached Siyakhana Garden in Bezuidenhout Park in Johannesburg to teach us food growing. In collaboration with the then manager, a four-week garden course was designed and run over four Saturdays, with our family as the first cohort. The gap between learning and applying gardening skills still remained until the idea of an accountability garden club took our food growing efforts to a whole new level, exposing our ignorance of the food system – and our vulnerability.

Buying directly from the city’s fresh produce market and growing our own seasonal food led to upfront and personal encounters with some of the vagaries of climate change and its underlying systemic causes. These included:

On the home-garden experience, poor rainfall, hail and money we had to spend on shade cloth netting to mitigate against heat and birds eating our produce, humbled us further. Whatever romantic magazine ideas I had about food growing were replaced by a rude awakening of what it really takes to be a participant in the food growing chain and not just a consumer. What eventually made the journey manageable was our starting a garden club, which we called the Neighbourhood Organisation for Agriculture at Homes and Schools (Noahs). This was initially a voluntary organisation of friends and associates. It worked on a stokvel model where each of the six members initiated a garden project supported by the group.

However, the first excitement began to wane when, after six months, the reality of how long it takes to grow a tomato, and align our lifestyles to building a food growing community, ushered in despondency. Some members argued that it cost them less to go to the local grocer and buy tomatoes than to grow your own, citing the time it took to water and wait for a harvest.

In the second six-month cycle of the “experiment”, half the members decided not to continue as the novelty of a homestead garden wore off.

On the other hand, as we experienced our abundant first harvest of tomatoes, butternut, beans, lettuce, rocket, spinach, the opposite took effect for us. It was no longer about what we produced but that we were capable of producing. A sense of ownership and power that we lacked previously took over. The idea of producing food as part of a collective, and thereby building community, became our intention. This is sometimes difficult in suburbia where safety and security rather than food security and sovereignty is usually people’s first priority.

Undeterred, my yearning to learn more led to my formal induction into the world of permaculture and agro-ecology through iZindaba Zokudla, an initiative of the Humanities Department at University of Johannesburg, championed by Dr Naude Malan. Through monthly food labs, peer-to-peer and expert-led knowledge exchange was facilitated among a group of urban farmers, largely from Soweto and surrounding areas. Then, exposure to Tracy Ledgers’ session sharing extracts from her book An Empty Plate was by far the most awakening message of the broken food system and the anomalies in the food value chain. Through the network and interaction with other food growers, seed activists, agro-processors, academics and students, iZindaba Zokudla as a movement enriched my food growing experience and awakened the retired activist in me.

Since the end of our home-schooling project and a return to economic life my perspective of food growing has shifted once more. I have evolved from homestead food grower to urban food activist. Noahs food garden club has become a non-profit organisation, Noahs Inc, with the past two years spent assessing the capacity and testing the concept of connecting inner-city farms as career learning spaces and journeys for food growing enthusiasts and school children.

Today we have other programmes on the horizon. They include a Farmers Beyond Borders against Xenophobia programme and 67 Gardens Programme which aims to build a community of sovereign food growers among vulnerable communities. Through an association with the Cooperative Policy Alternative Centre (COPAC), urban farmers and food growers are organised to supply the Wits Urban Farmers Market, a monthly farmer-to-customer market facilitated through the Wits Food Sovereignty Centre. Farmers from this market along with other inner-city food growers are currently undergoing a process of benchmarking their food growing practices against an organically accredited model approved through the Participatory Guarantee Systems (PGS) Group.

In conclusion, let me say that most emerging urban farmers have already experienced some forms of climate change. The language of climate change may be new, but the effects have been felt long before. This ranges from effects of changes in weather patterns such as low rainfall to hail. Compounding this is the lack of access to markets; input costs are high and there is a lack of proper mentoring and financial support to move beyond subsistence farming.

But people need not succumb to defeat. We have options. In fact, farmers we work with have already begun mitigating against climate change effects by adopting agro-ecology and permaculture practices. My journey has taught me that sometimes it is through life shocks that you develop awareness and realise the choice to move out of aloofness; in the journey of aligning your life through shared knowledge and collaboration, your activism takes shape towards a collective path. Through the conversations, collaboration and connecting currently taking place, the climate change discussions will bring food producers and consumers closer together.

That is an outcome that would benefit us all. DM

Maverick Citizen supports the Global Climate Strike and citizen action to mitigate the climate crisis. Where will you be on 20 September 2019? What will you tell your children and grandchildren you did to save the planet? There are no if or buts about this.

Sandra (aka Sandy) Perry is a freelance consultant skilled in project management, facilitation and life coaching. She is an avid food grower and the founder and Director of Noahs Inc, a non profit organisation facilitating agricultural career learning journeys and food garden clubs. As an associate of COPAC, she is responsible for organising the Wits Urban Farmers Market.