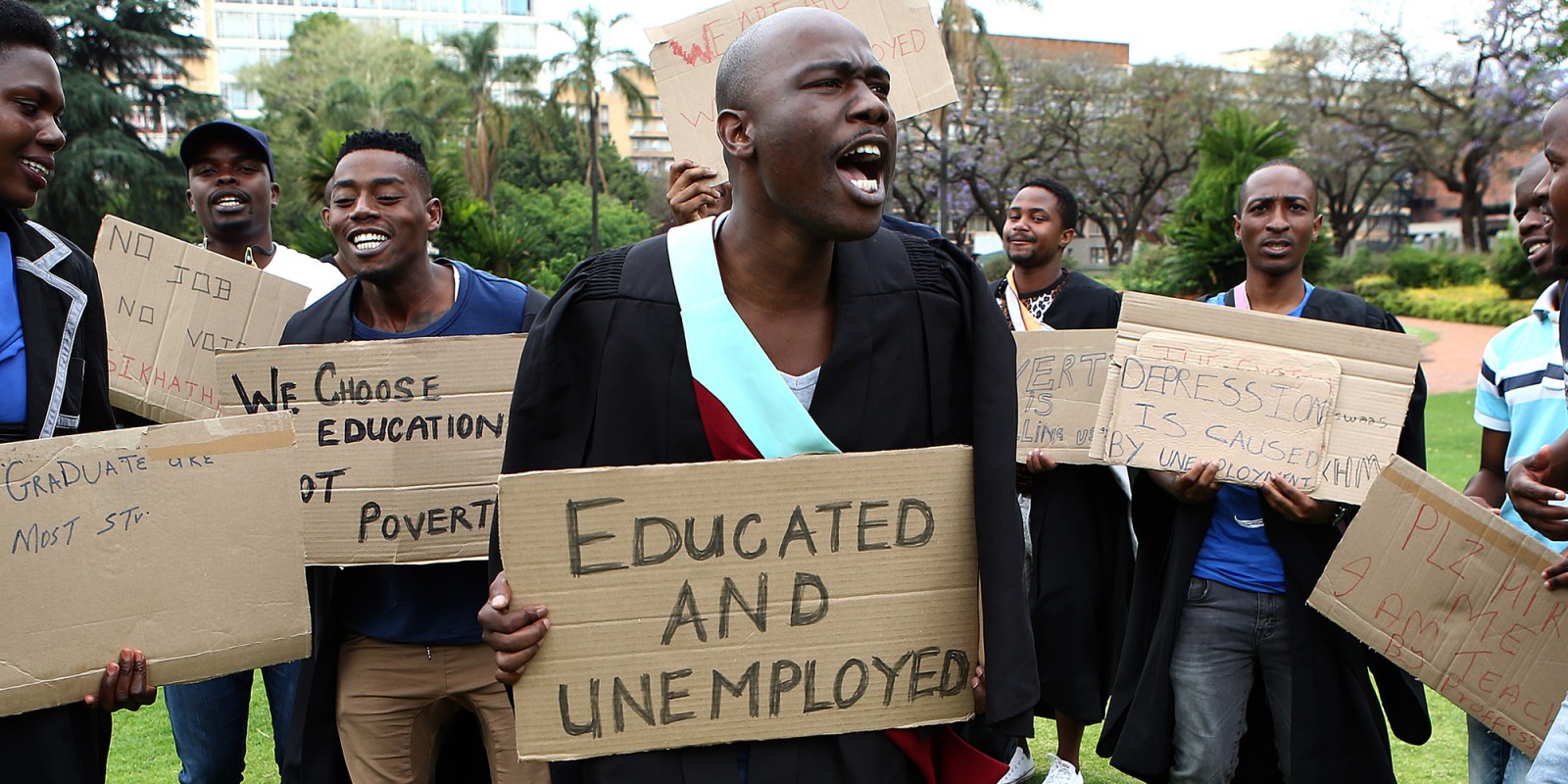 Unemployed graduates from Kwa-Zulu Natal and Pretoria sing as they gather at Burgers Park before marching to the Union Buildings on November 06, 2018 in Pretoria, South Africa. The graduates, some wearing their graduation regalia possess qualifications ranging from economics degrees, fine arts diplomas and teaching diplomas handed over a memorandum to officials demanding government to come up with solutions to tackle the rising unemployment rate. (Photo by Gallo Images / Phill Magakoe)

Misery, it is often said, is a communicable disease. And so it is turning out for business confidence. Depression is feeding on itself, and that showed up on Wednesday 11 September in not one but two business confidence indices, which show pessimism is now at levels not seen in decades.

“It would appear,” Rand Merchant Bank and Stellenbosch University’s Bureau for Economic Research noted, ever so softly, that “more and more business people participating in the BER’s survey are simply giving up hope.” And this was the less depressing of the two indices.

The BER’s business confidence index (BCI) dropped to 21 index points in the third quarter from 28 in the previous quarter, data released on Wednesday 11 September showed.

This is the lowest level since the 1998-1999 emerging-market debt crisis and comes after expectations that the level would remain unchanged at 28 points. Four out of the five sectors that make up the BCI deteriorated in the third quarter, with the one sector that was holding up, wholesale trade, joining the others on a downward trend. The only upward movement came from motor car retailers.

The SA Chamber of Commerce and Industry (Sacci) BCI fell to 89.1 index points in August from 92 in July, its lowest level since – and this is really amazing – April 1985. That was the date the UN Security Council passed a call for more sanctions against SA following the SADF’s Botswana raid and the failure of the Eminent Persons Group talks.

“To further delay growth-boosting reforms that should have been implemented years ago — such as easing of immigration regulations, cutting red tape, auctioning spectrum and simplifying visa regulations — will simply perpetuate this vicious cycle SA is currently in.

“Time is not on our side, especially now that the global headwinds the country is facing are becoming ever-fiercer.”

“Instead, politics are perceived to continue to hamstring the progress of meaningful reform.”

The tax burden South Africans face has risen materially, the latter weakening disposable incomes, and a consumption-led recovery is currently not anticipated for South Africa. Retail confidence is at its lowest level in 20 years, at 17, showing 83% of retailers are dissatisfied with current business conditions, she wrote in a note to clients.

Head of Capital Markets Research at Intellidex, Peter Attard Montalto, said the survey results suggest the impressive second-quarter GDP increase was more of a bounce-back from the depressing first quarter rather than signalling a recovery.

“The underlying recovery is exceptionally weak if it’s happening at all.” BM