The people who sparked the xenophobic violence 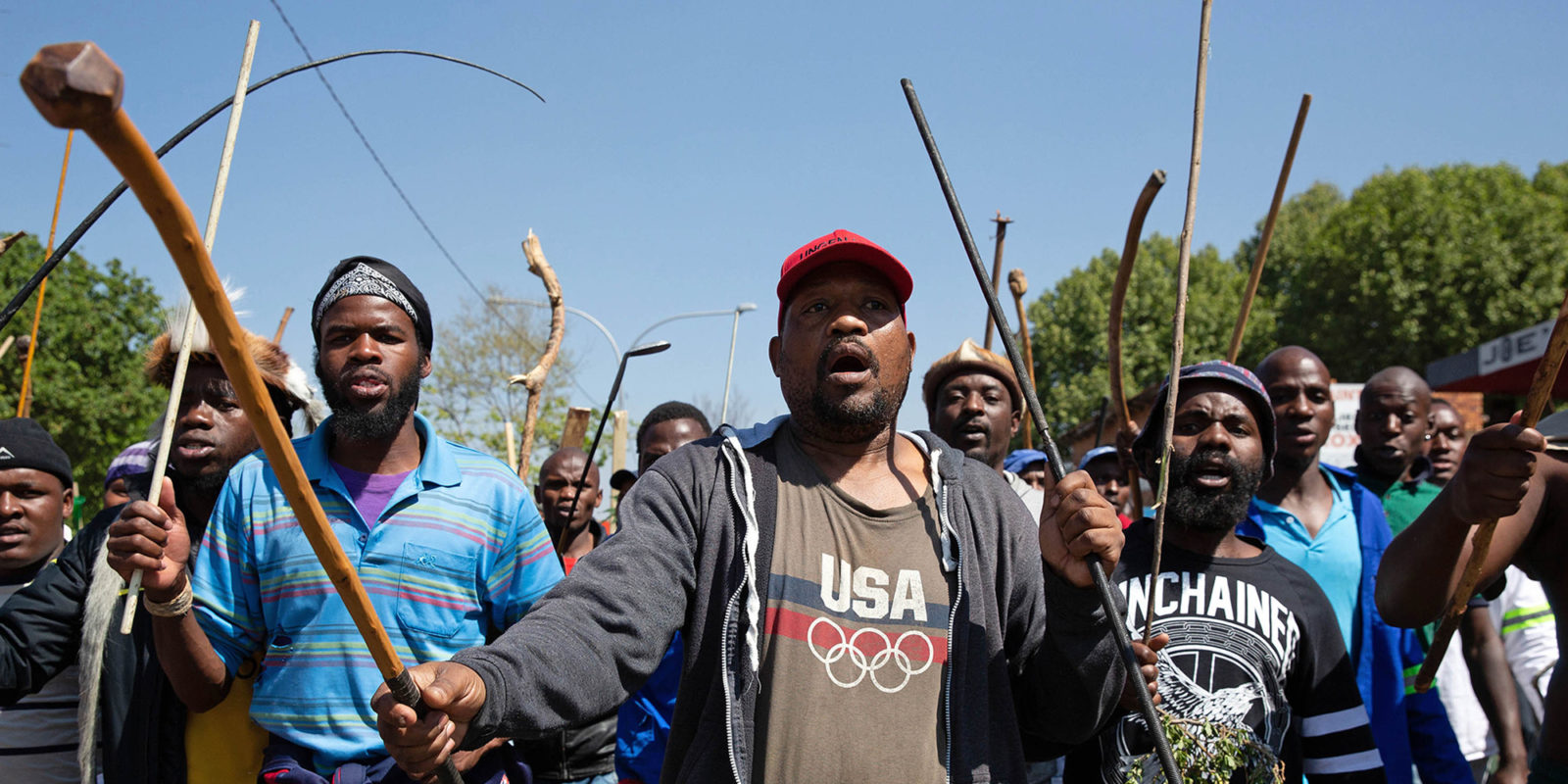 8 September 2019: Prince Mangosuthu Buthelezi addressed a large gathering of people - mostly men from inner city hostels - whom he tried to dissuade from participating in what he called "purely xenophobic" violence. The crowd did not repsond well and went on the rampage. Two people were killed. Malvern, Johannesburg. Picture: James Oatway.

Zweli Ndaba is the chair of the Sisonke People’s Forum. He penned the flyer that spurred hostel dwellers and truck drivers to take part in the shutdown that led to xenophobic attacks in Gauteng.

Sitting on a step near a rubbish bin inside the KwaMai-Mai Hostel and Traditional Market in Johannesburg, Zweli Ndaba admits he’s feeling angry and frustrated.

That anger and frustration is born out of numerous attempts to meet with Johannesburg Mayor Herman Mashaba, Gauteng Premier David Makhura, the national and provincial police, and other government departments.

Ndaba, who is the chairperson of a group calling itself the Sisonke People’s Forum, claims he has been trying to meet with these officials since at least January to raise his concerns about rising crime levels, unemployment, the lack of housing and the proliferation of drugs in communities.

But after his pleas to meet with officials fell on deaf ears, Ndaba reached out to those sympathetic to his cause – hostel dwellers in Johannesburg and the All Truck Drivers Foundation (ATDF) – to organise a national shutdown. That shutdown was scheduled for Monday 2 September 2019.

He insists that it was never meant to be xenophobic, but the grossly anti-immigrant rhetoric that has emerged from the violence in Gauteng in early September is irrefutable. The shutdown claimed at least 12 lives as the xenophobic violence spread across Johannesburg. Livelihoods have been destroyed and people have been displaced in the areas where the violence has been most rampant.

The police have arrested more than 680 people for a number of crimes relating to the xenophobic violence.

“Me being angry, I think no one is happy about seeing a South African person smoking drugs, sleeping under a bridge, not working,” he said. “What I believe is the people of South Africa, they showed their anger.

“We’ve been knocking on the doors of the government. We went twice to the office of Premier Makhura and they were just laughing at us. I personally took a phone and phoned the [Police] Minister Bheki Cele. He wasn’t answering his phone. I invited the police commissioner of Gauteng, Mr [Elias] Mawela, to a public meeting. He never even bothered to reply to the email.”

Ndaba created and circulated the flyer that called for the shutdown. The flyer reads: “Sisonke People’s Forum … invite all the residents of this country… to come together as South Africans with one voice of ENOUGH IS ENOUGH, ON SELLING OF DRUGS, ON PROPERTY THEFT, AND ON OUR WORK TAKEN BY FOREIGN NATIONALS.”

The flyer called for the blocking of access to communities and industrial areas “until our voices are heard”. It concluded with: “South Africa for South Africans. This is not xenophobia but the truth.”

Ndaba insists that the sentiments in his pamphlet weren’t xenophobic and that he never called for violence against anyone. He blamed government officials for the violence, saying if they had met with the group earlier, the violence could have been prevented.

“When they [politicians] say we need to live in harmony, what is the harmony they talk about? Because we are seeing a lot of countries just bunching into South Africa, sharing just that piece of the bread that South Africa has,” he said. “Maybe the government officials, they know their kids are well, living in Europe, and because of them they are just getting a lot of money at the end of the month,” he said with his arms folded.

“If ever they are serious about this issue, we can even show them schools. The kids are not problematic. The only thing that is problematic is drugs and these foreign nationals pushing drugs to our nation.”

Vusumuzi Sibanda, the chairperson of the Africa Diaspora Forum, said they handed over this and other flyers containing xenophobic messages to the police days before violence broke out but no action was taken.

After a week of violence, Cele scheduled an urgent imbizo with hostel dwellers on Sunday 8 September. But he had to cancel it because of the Reed Dance ceremony taking place in KwaZulu-Natal and other commitments to which he had to attend.

Instead, Mangosuthu Buthelezi, as the traditional prime minister to Zulu King Goodwill Zwelithini, agreed to meet with hostel dwellers at Murray Park on Jules Street in Malvern, Johannesburg. Ndaba was at this meeting, greeting many of the izinduna from the various hostels.

Many of the men – angered by rising unemployment and inequality, and harbouring feelings of powerlessness arising from government officials ignoring their complaints – have been blamed for the violence and looting that spread across Gauteng.

Residents from the Wolhuter, George Goch, Denver and Cleveland men’s hostels came to make their voices heard, hoping Buthelezi would accept their demands. Marching to the park at which the meeting was held, they sang: “Awahambe amakwerekwere, awabuyele emuva. [Foreigners must go, they must go back.]”

Buthelezi called for calm and condemned the violence. “What we have seen in the past few days is unacceptable,” he said. “The attacks on foreign nationals and their businesses are purely xenophobic.

While he was pleading for peace, the majority of the group, still jeering, got up and marched out of the park, clearly dissatisfied with Buthelezi’s stance.

They were angry and resentful that Cele had postponed the urgent imbizo.

The hostel residents eventually came back to the park, where Buthelezi was carrying on with his address. He called on them to stop the looting and violence. “In a situation of conflict, it is dangerous to tar everyone with the same brush. Even where there are valid complaints against an individual, we cannot take the law into our own hands,” he said.

When he had finished speaking, a number of people took to the stage to air their grievances. They expressed considerable anger towards migrants, blaming them for many of the socioeconomic problems South Africans face. Some of the comments, though grossly xenophobic, were met with cheers and approval from the crowd.

One man said: “People of South Africa, there is only one thing that we have come for here today. Kuzabakho uxolo mhla ugovernment lo usiphetheyo wathatha amaforeyna wawabeka lapho asuka khona. [There will only be peace when the government in charge of us deports all the foreigners back to their countries.]

“Let’s not be confused by old people here in South Africa. In America, there were talks of building a tall wall to prevent foreigners from entering their country. Why should we not do the same?” he asked, to mass approval.

Yet another man, who identified himself as Bongani Ngubane, complained about housing. “We, people of South Africa, don’t have houses. The government has taken houses and given them to foreign nationals. We want to know when are they returning our houses,” he said.

“When are we getting our houses?” he continued. “When is government going to take a stand and give us our houses?

The crowd cheered in approval, some shouting “Sikhathele [We have had enough]”, others, “Izindlu zethu [Our houses]”.

When the meeting ended, the hostel dwellers left the park and marched down Jules Street, smashing windows and throwing rocks. As they got to Jeppestown, they became even more violent. The mob splintered and made its way to various parts of Johannesburg and, by the end of the night, two people had been killed, a number injured and a mosque petrol bombed.

Many of the hostel residents were talking about the same issues: housing shortages, unemployment, inequality and the proliferation of drugs in their communities. But their extreme xenophobia played on dangerous and chauvinistic stereotypes of migrants from other African countries.

Siphiwe Mhlongo, the chairperson of the hostel izinduna in Gauteng, said they were condemning the destruction and physical harm but cautioned against dismissing people’s concerns because they had committed violence.

“Their concerns and complaints are that companies are taking advantage of foreign nationals. They are paying them a low salary and also in housing department, there are suspicions that they [foreigners] are buying houses. That’s why people are delayed to be getting their houses,” he said.

“And thirdly, is the drugs. There is a belief that drugs came with them. So that’s the main three issues that are of great concern to our people,” Mhlongo said.

“We are condemning this violence. We want it to stop.” But Mhlongo said hostel residents were furious when Cele postponed the imbizo and government failed to meet with them. “They are angry because they don’t have answers. We must stop this thing now,” he said.

Cele’s spokesperson, Lirandzu Themba, said: “The minister wants to see an end to the violence and also have more permanent solutions to the unrest. As we speak, discussions are ongoing to get finality on a new date. These talks are alongside izinduna, who have agreed to the postponement and are leaders of the communities.”

Ndaba said he believed people were acting violently because they were frustrated, hungry and feeling powerless. “Because they see the lack of this government. I think it is something like that. We are appealing again to this government.”

ATDF chair Sipho Zungu confirmed that he knew of Ndaba and the Sisonke People’s Forum, and that the two organisations share many similar complaints. But he dismissed any criticism that the ATDF or any other organisation was being xenophobic in its attitudes towards migrants.

“People must know what xenophobic means and what is really xenophobia. I think people don’t know what is xenophobia,” he said.

“That’s hatred. I think people hating these other black people. But the way they are doing things, hijacking buildings, selling drugs, nobody can be happy about that. Who can be? It is getting out of control and I think government must do something because they are the key to this.”

Olebogeng Molatlhwa, assistant director of communications for Mashaba, confirmed that the Johannesburg mayoral office had received two separate pieces of correspondence from Ndaba and the Sisonke People’s Forum wanting to raise concerns about drugs and employment in the city.

“Daily, the office of executive mayor is inundated with hundreds of requests for meetings, which have to duly be assessed and either accepted or redirected, based on their merits. Owing to the nature of the issues he sought to discuss and keeping in mind the need to secure a successful resolution thereof, a decision was taken to refer him to the SAPS and the Department of Home Affairs, as these issues fell within the ambit of the two departments. Mr Ndaba was duly informed of this decision,” Molatlhwa said.

Mawela’s spokesperson, Brigadier Mathapelo Peters, was not able to confirm if the police commissioner’s office had received meeting requests from Ndaba. She dismissed his accusations that the police did not want to meet as “very untrue and unfortunate”.

Makhura’s spokesperson, Vuyo Mhaga, was unable to confirm whether or not the premier’s office had received any meeting requests. DM