In the build-up to WEF, Mboweni is reticent on Treasury’s surprise economic recovery plan 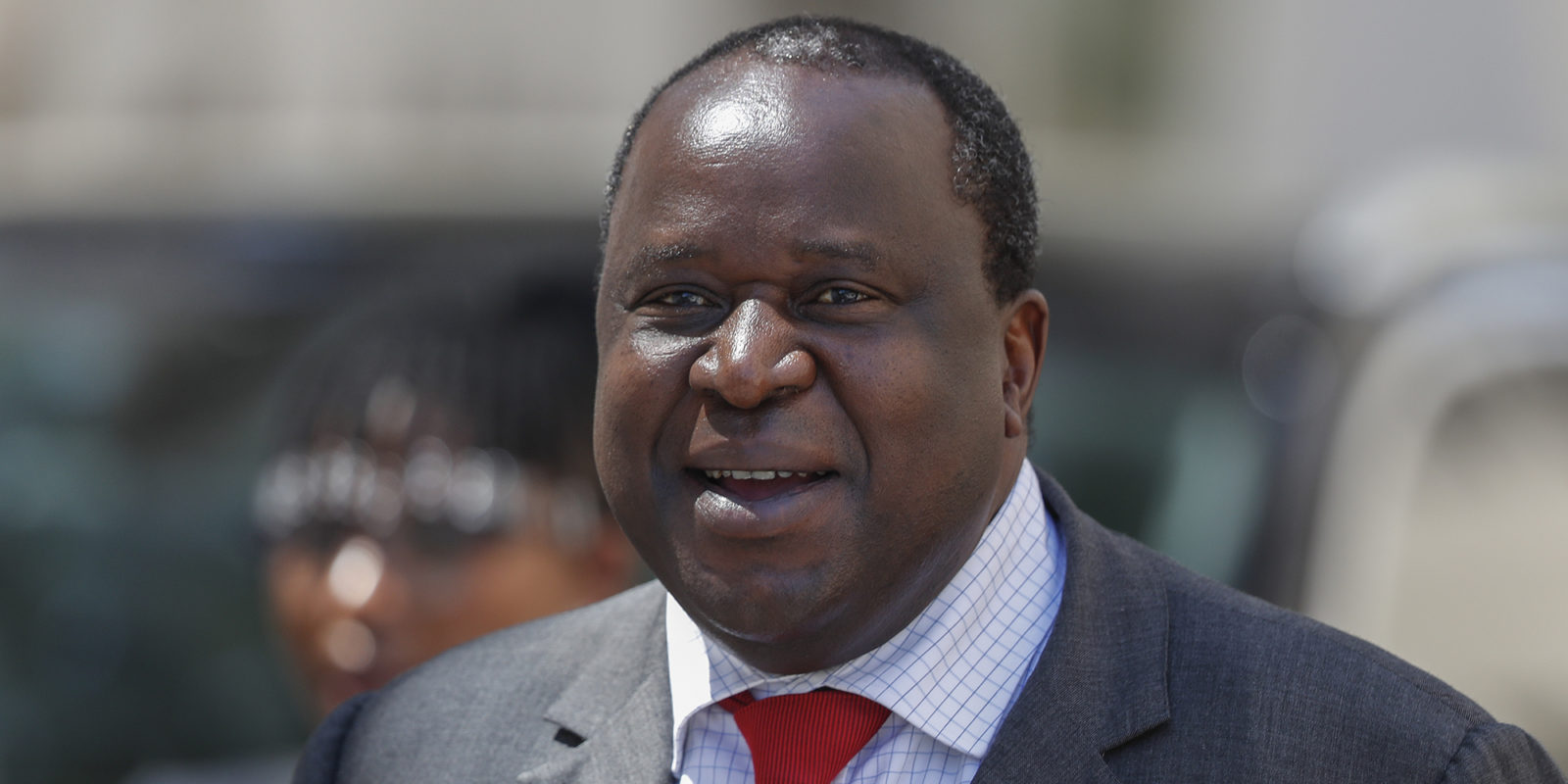 At a media briefing on 2 September, Finance Minister Tito Mboweni refused to answer questions about a strategy document – unexpectedly published by the National Treasury on 27 August – that proposes wide-ranging structural reforms to boost SA’s deteriorating economy.

Ahead of Finance Minister Tito Mboweni’s meeting with the ANC top brass on 2 September to discuss his economic recovery plan for South Africa, and account for its surprise release without consulting his party comrades, the finance minister wasn’t his usual frank self.

At a media briefing on Monday morning about the build-up to the World Economic Forum (WEF) Africa meetings in Cape Town from 4 September, Mboweni refused to answer questions about the strategy document – unexpectedly published by the National Treasury on 27 August – that proposes wide-ranging structural reforms to boost South Africa’s deteriorating economy.

Mboweni was reticent, saying it was “not the time or place” for questions relating to the strategic document – but let it slip that he’s probably under fire for releasing the document without consulting ANC structures and labour alliance partners.

“I am used to getting in trouble these days. It seems to be my daily bread,” he said at the WEF media briefing.

After the briefing, Mboweni probably went to ANC headquarters in downtown Joburg to meet with the top brass to discuss the strategy document and account for not toeing the party line by consulting on policy ideas internally first.

After all, the ANC is obsessed with complementing every policy idea with resolutions taken by its members at the party’s 2017 elective conference where Cyril Ramaphosa emerged as party president and subsequently, the country’s number one.

The ANC’s alliance partner Cosatu has called for the economic recovery document to be withdrawn, citing a lack of consultation and accused Mboweni of “undermining” the National Economic Development and Labour Council processes in dealing with the document.

According to a City Press report on 1 September, Mboweni has an enormous battle ahead in getting his ANC comrades and Cabinet colleagues to support his 77-page document.

ANC and Cabinet members are vexed about Mboweni’s “premature” release of the document. His comrades say he should have consulted wider or even let Ramaphosa own it. The document has been in the making since 2018, with many ministers failing to comply with a series of deadlines – the latest being 15 August – to make contributions to it.

The document is titled Economic Transformation, Inclusive Growth, and Competitiveness: Towards an Economic Strategy for South Africa. It seeks to yank the country out of its unemployment crisis, reduce the reliance of debt-laden state-owned entities (SOEs), such as Eskom and South African Airways, on government bailouts and shore-up public and private sector investments in growth drivers like infrastructure projects.

The strategic document, which is not a Cabinet document but merely a policy paper, is open for public comment until 15 September. It draws on the National Development Plan, a public policy adopted by Parliament in 2012 for, among other things, reindustrialising the economy, improving access to quality education and eliminating poverty by 2030.

The five themes of the document are: modernising network industries; lowering barriers to entry for new businesses and increasing competition to address distorted patterns in the ownership of the economy; prioritising labour-intensive growth in sectors such as agriculture; implementing flexible industrial and trade policies; and promoting export competitiveness and harnessing regional growth opportunities.

If these interventions are implemented over time, they are expected to raise economic growth by two to three percentage points and create more than one million job opportunities.

South Africa is in a low-growth trap and cannot create jobs. The unemployment rate jumped to an 11-year high of 29% in the second quarter of 2019 or increased by 455,000 people to 6.7 million. Economists have argued that annual economic growth of at least 3% is required to make a dent in unemployment figures. However, the South African Reserve Bank forecasts GDP growth of 0.6% in 2019 – lower than government’s 1.5% official forecast

At the WEF briefing, Mboweni referred to proposals in the strategic document, without mentioning the document itself.

He called for South Africa to open its borders for the free movement of people into the county, which would benefit the tourism industry and result in the influx of skills.

“The experience around the world is that countries that are receptive to immigrants tend to be more dynamic in their economic activities. There is sufficient evidence to say that narrow nationalism is not a good catalyst for economic development. But openness is,” he said.

The strategic document proposes that visa regulations should be amended and relaxed to ensure a “better balance between security concerns and the growth of the tourism sector”.

Mboweni said South Africa would benefit most from the agreement because the country has the “largest industrial park/base in Africa” located in Gauteng’s Ekurhuleni, which houses the OR Tambo International Airport and logistics networks.

Growth coalitions that work? We need to talk about citrus

Has there ever been a more important time to focus on workflow management efficiency?