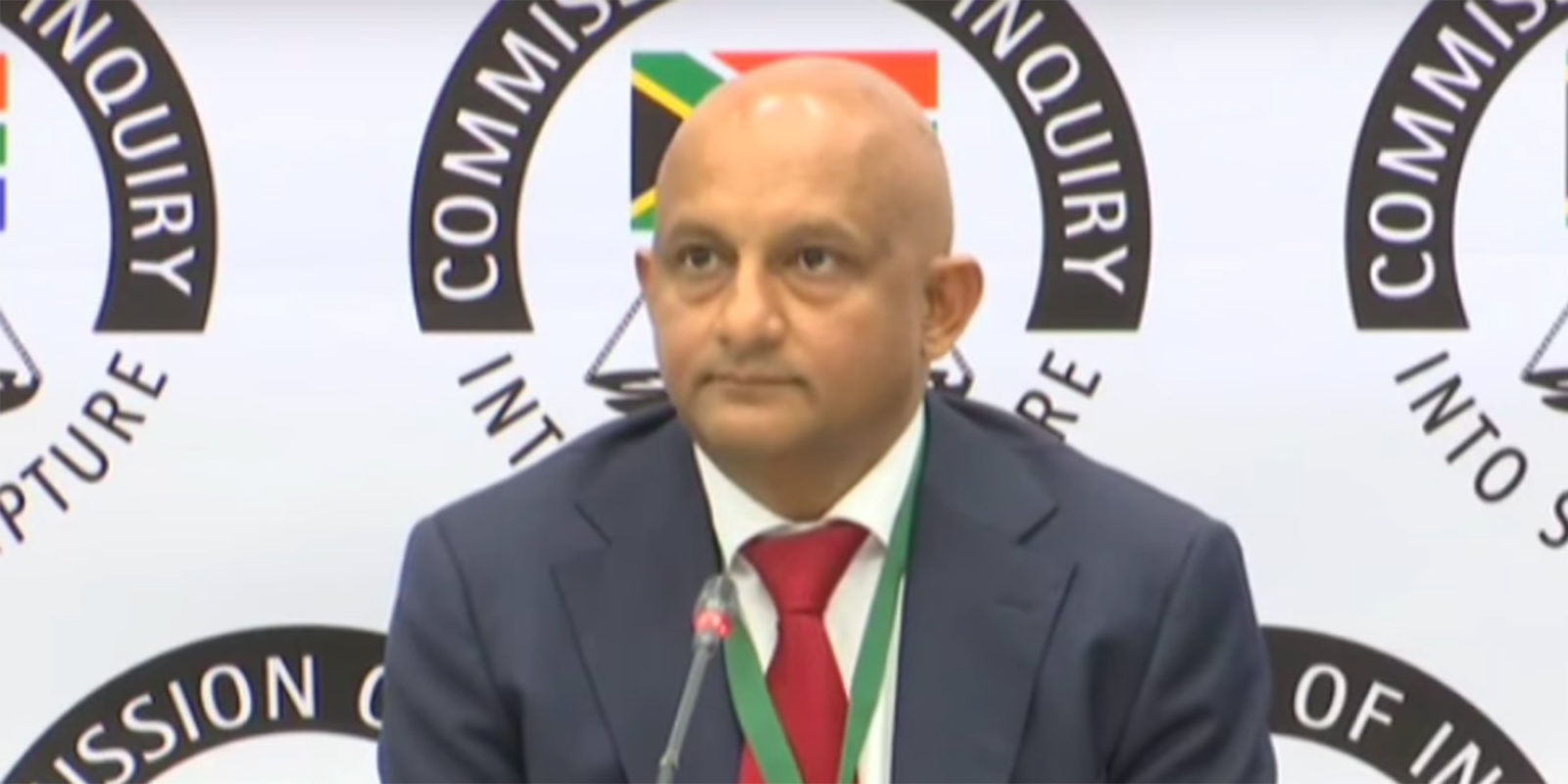 Zondo Commission witness, North West businesswoman Babadi Tlatsana, has disappeared and Deputy Chief Justice Raymond Zondo wants answers: ‘It appeared that she was under threat and she left. She didn’t feel, it seems, protected or safe. I would like to be updated.’

North West businesswoman Babadi Tlatsana has fled South Africa, citing fears for her safety and her life. Tlatsana, the owner of the company Koroneka Trading and Projects, testified at the State Capture Inquiry in June 2019.

She disclosed details of a dodgy North West contract for Koroneka to run ground handling services for South African Express (SAX) at the Mafikeng and Pilanesberg airports. Consequently, some R51-million entered Koroneka’s account.

This is the first time on record a commission witness has fled the country since public hearings began a year ago. On Thursday, 29 August 2019, evidence leader advocate Kate Hofmeyr told Deputy Chief Justice Raymond Zondo of Tlatsana’s disappearance

Even Tlatsana’s own attorney, Julian Knight, does not know her exact whereabouts. He tabled an affidavit reporting Tlatsana fled South Africa in fear. Knight indicated Tlatsana was subject to intimidation after testifying before the commission, and in fear for her life, fled the country.

“She observed suspicious activity around her residential property in Mafikeng where unknown men, who did not identify themselves, approached family members inquiring about her whereabouts,” reads Knight’s affidavit.

“I was instructed an attempt was also made to gain entry to her residence. As a consequence of feeling unsafe, Ms Tlatsana decided to leave the Republic of South Africa.”

Justice Zondo said: “Although she would have brought issues of her concerns in regard to safety and threats to the attention of the authorities, the authorities don’t seem to have done anything.

“It appeared that she was under threat and she left. She didn’t feel, it seems, protected or safe. I would like to be updated.”

Earlier in 2019, Tlatsana implicated herself and former SAX manager Brian van Wyk, who is closely associated with the ANC, in an allegedly unlawful scheme.

Tlatsana reported prior threats issued against her after relations between her and Van Wyk deteriorated. Two men reportedly visited Koroneka’s offices on Van Wyk’s behalf, following a disagreement over money Koroneka was expected to pay.

“Maybe there was a gun there, that is what I was thinking,” said Tlatsana of what she suspected when one of the men changed his posture while the other fixed his jacket. “Oh my god, I couldn’t go home,” she added.

She further reported anonymous callers asked after her daughter’s whereabouts.

Then, Tlatsana claimed a man approached her at a funeral in North West sometime in 2017. She alleged he said: “Don’t you know Supra needs your head?”

The man told her this, she explained, because he said she “took the airport money” linked to the ground handling contracts.

Tlatsana provided an audio recording of a conversation with Van Wyk and gave information on the threats against her to the Hawks. She testified the Hawks had done nothing by the time she testified in June.

Justice Zondo wanted an update from the Hawks. This week, Hofmeyr provided feedback on a case lodged on Thursday, 4 January 2018 in Mafikeng.

“Officers were in dismay,” said Hofmeyr, reading from a report to the commission. “There was no control from the commanding officer side,” she continued.

The report indicated the provincial organised crime unit was “now investigating” and the initial warrant officer was the subject of an ongoing disciplinary investigation.

“It’s been more than a year-and-a-half since the complaint was laid,” noted Justice Zondo.

Tlatsana’s evidence included allegations Van Wyk told her tens of millions of rand Koroneka received should be paid to politicians and the ANC.

Listen to the conversation below.

In 2016, Tlatsana handed the audio recording of her meeting with Van Wyk to SAX security manager Timothy Ngwenya.

Ngwenya testified he was given the audio after Tlatsana’s company, Koroneka, had been shafted in the deal.

During a meeting at a restaurant, said Tlatsana, Van Wyk drew a chart explaining the scheme and who needed to be paid what amount. She claimed in her evidence that Van Wyk told her then ministers Lynne Brown and Dipuo Peters would be paid R20-million each.

Van Wyk allegedly told Tlatsana that then North West number one, Supra Mahumapelo, had already received R5-million and was due to receive a further R10-million.

Tlatsana testified she personally donated R1-million to the ANC. Further, she claimed Van Wyk instructed her to reimburse his accountant, David Kalisilira, R100,000 for reflector jackets purchased for the ANC’s 104th celebration.

Thursday’s witness, Neo Solutions director Vivien Natasen, testified after the news of Tlasana’s disappearance. Koroneka Trading transferred nearly R10-million to Neo Solutions, and from there the funds flowed elsewhere, including to the ANC.

Natasen testified he and Van Wyk were planning a farming project and he was unaware almost R10-million transferred from Koroneka to Neo Solutions was at all linked to SA Express.

In early 2016, when Van Wyk asked for R300,000 of the funds to be made available, Natasen said he happened to have the money in cash at his house.

Natasen was on holiday but, through his brother, was able to ensure the cash was available for collection by Van Wyk’s bag man. While Natasen said he did not normally keep cash at home, he claimed to have been selling an Aston Martin car at the time.

Hofmeyr interrogated this point, asking why Natasen had R300,000 cash in his house in January 2016 because of the sale of a car that only materialised in September 2018.

“He asked me to obviously wait and that’s when we finalised the sale,” replied Natasen.

Interactions between Hofmeyr and Natasen were strained throughout the day, but the witness relaxed when re-examined by his lawyer, advocate Andre Pienaar.

“It does bring about a question as to how and if and when we are going to be given an opportunity to cross-examine her.”

Pienaar asked Natasen about his duties as a qualified chartered accountant. This was because Hofmeyr had needled Natasen over incorrect financial statements.

“When I signed these financials, there is no inkling that I am signing them off as (a) chartered accountant,” said Natasen who added he was a Neo Solutions director working in the field.

“My understanding was that I had put in place checks and balances, I had taken reasonable steps.”

It also emerged Natasen communicated with the Neo Solutions auditor after it emerged there was a “discrepancy” in a financial statement provided to the commission.

Natasen handed a Neo Solutions financial statement with a cover letter seeming to show it had been signed off by the auditor.

On receiving the document from the commission, however, the auditor realised his cover letter was attached to a different financial statement than the one he checked. The auditor alerted the commission to this “discrepancy” and in a WhatsApp message, Natasen asked the auditor if he was buying time.

Natasen claimed there was nothing sinister in the WhatsApp communication and that he wanted the two to work together to provide the correct information to the commission.

The auditor has accused Natasen of seeking to influence him, but the Neo Solutions director claims he sought to protect both their reputations.

While Natasen faced a grilling on Neo Solutions financials, he insists there was no sinister motive in accepting the money from Koroneka.

“There’s been no intention or knowledge the funds were not from a reputable source at the time,” he said.

Natasen outlined his objective, “It’s obviously to confirm that I was not complicit or party to the State Capture that occurred here.”

He highlighted, in contrast with the almost R10-million paid to Neo Solutions, an unaccounted for R28-million was held by Tlatsana’s company Koroneka.

His lawyer Pienaar noted Tlatsana had “skipped” the country.

Natasen insisted he and Van Wyk were working on a genuine farming project and provided business plans to the commission.

In an audio recording, Natasen can be heard telling Van Wyk he agreed to help Van Wyk. Natasen anxiously asks Van Wyk if money from Koroneka to Neo Solutions was linked to SA Express. Van Wyk insisted it was not.

Now, Natasen wants the man who was to be his partner in a farming project to testify under oath. They were each set to contribute R10-million.

“Through my evidence and Tlatsana’s evidence he has been implicated, so I think he should be here,” Natasen said of Van Wyk.