Mangosuthu Buthelezi through the years – as seen by Zapiro 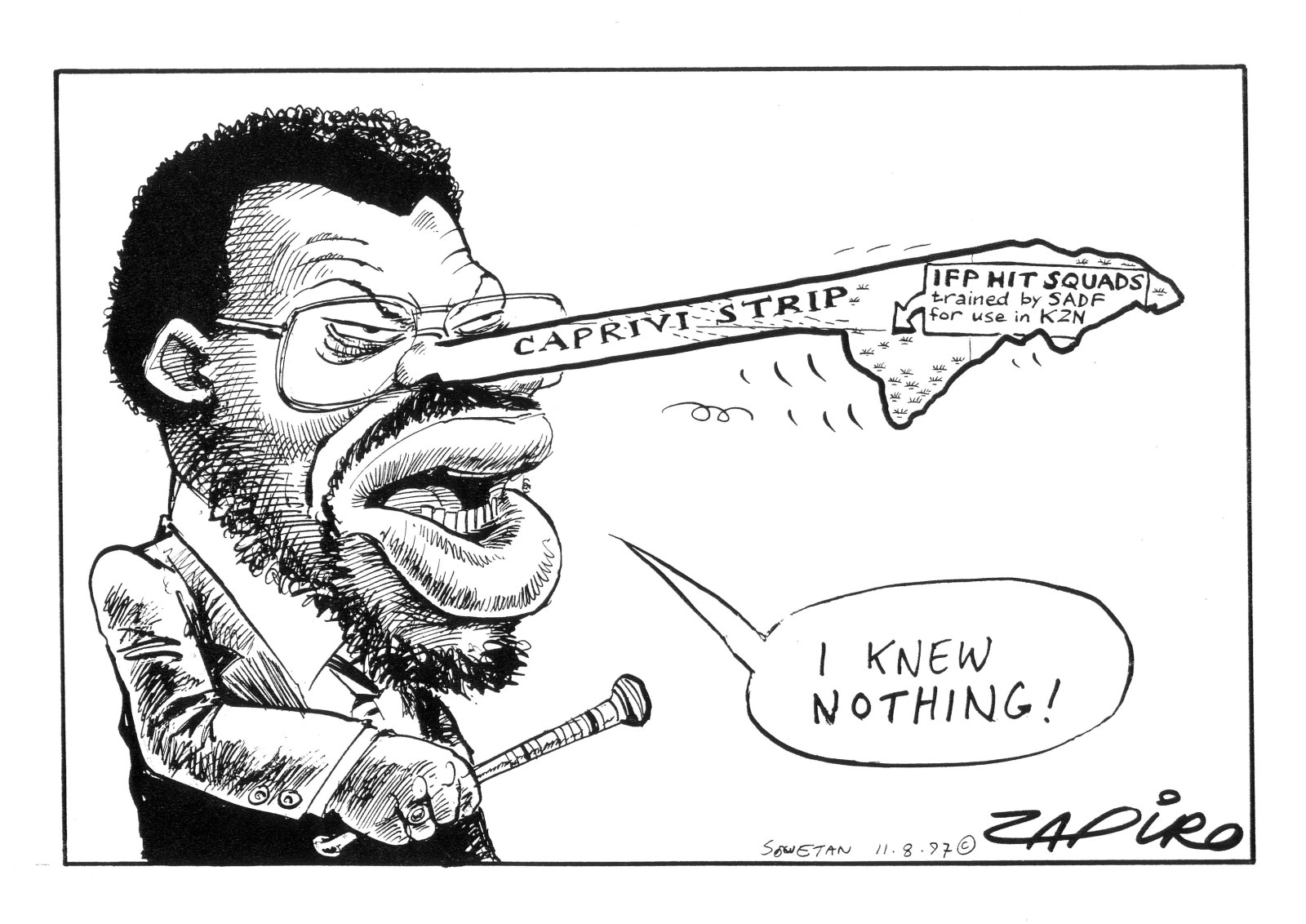 After 44 years at the helm of the Inkatha Freedom Party, 91-year old Mangosuthu Buthelezi has finally handed over the reins of power to newly anointed IFP president Velenkosi Hlabisa. Over the decades, Buthelezi has been a central and often divisive figure in South African politics. We take a look at some of the memorable moments of his political career – as captured by cartoonist Zapiro.

With text adapted from Zapiro’s collection The Mandela Files (2008)

Mangosuthu Buthelezi has always been a bundle of contradictions. He condemned apartheid but collaborated with the regime.  He professed to be a peacemaker while inflaming his followers with war talk and asserting their right to carry so-called traditional weapons. He called for liberation while constantly obstructing the liberation movement. Politically, he was a thorn in Nelson Mandela’s side while claiming a special relationship with him.

Describing him as sensitive to criticism does not do him sufficient justice – he’s known to be the most litigious politician in South Africa. Back in the 1980s, even during the State of Emergency, editors seemed to be more nervous about cartoons in which I featured Buthelezi than cartoons in which I slammed the state. On more than one occasion I was persuaded to make changes to Buthelezi cartoons before going to print, but I tried not to let this blunt the message. Buthelezi has reacted angrily to some of my cartoons about him, but for some reason, he’s never sued me. 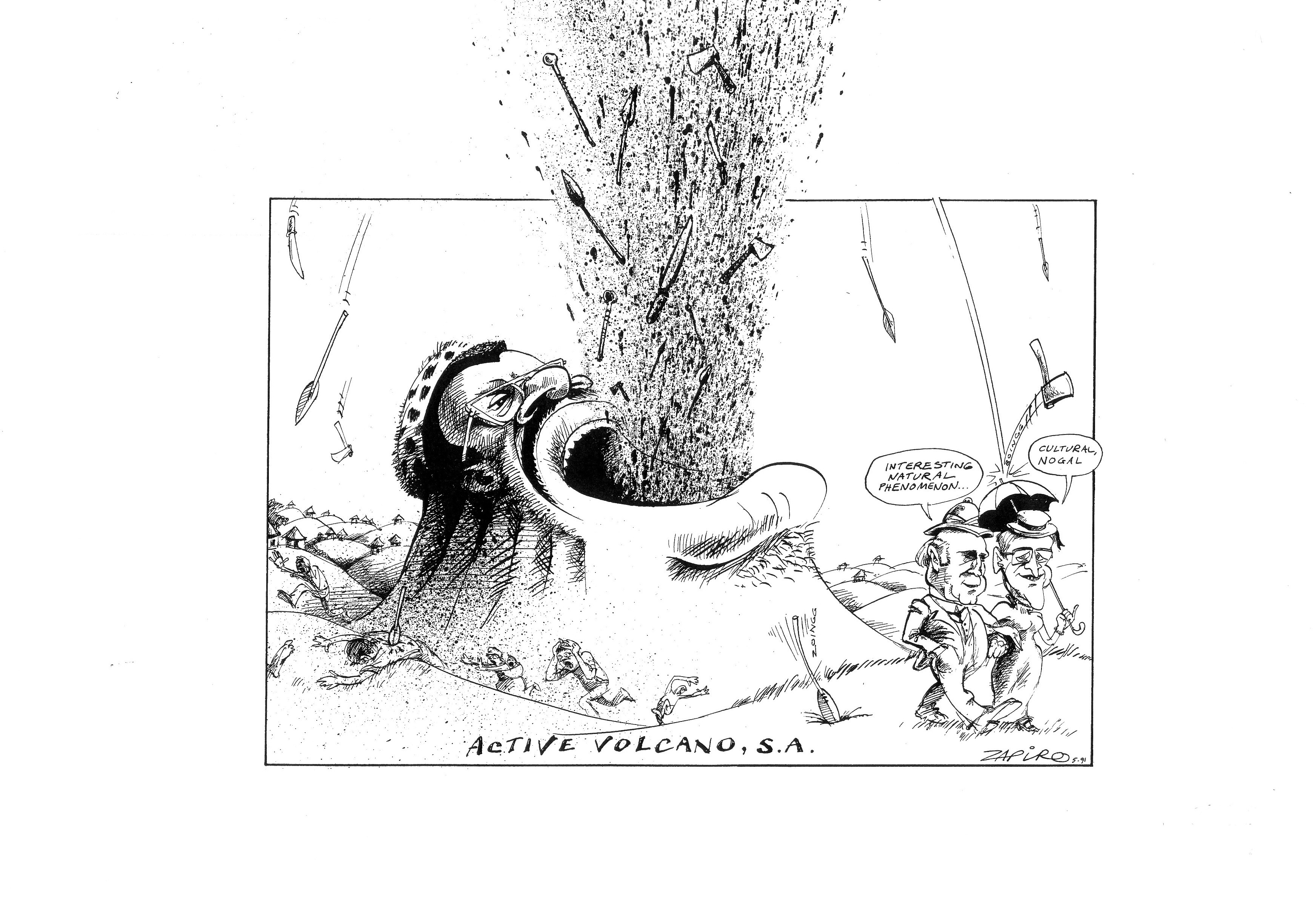 I drew this 1991 cartoon for New Era magazine. I had approval from the editor, Guy Berger, to draw it but when it was finished he had second thoughts, which I understood under the circumstances. New Era was hand-distributed and it was thought people distributing it might be injured or even killed by Inkatha thugs, so we agreed it could not be published at that time in New Era. I have published it since elsewhere. 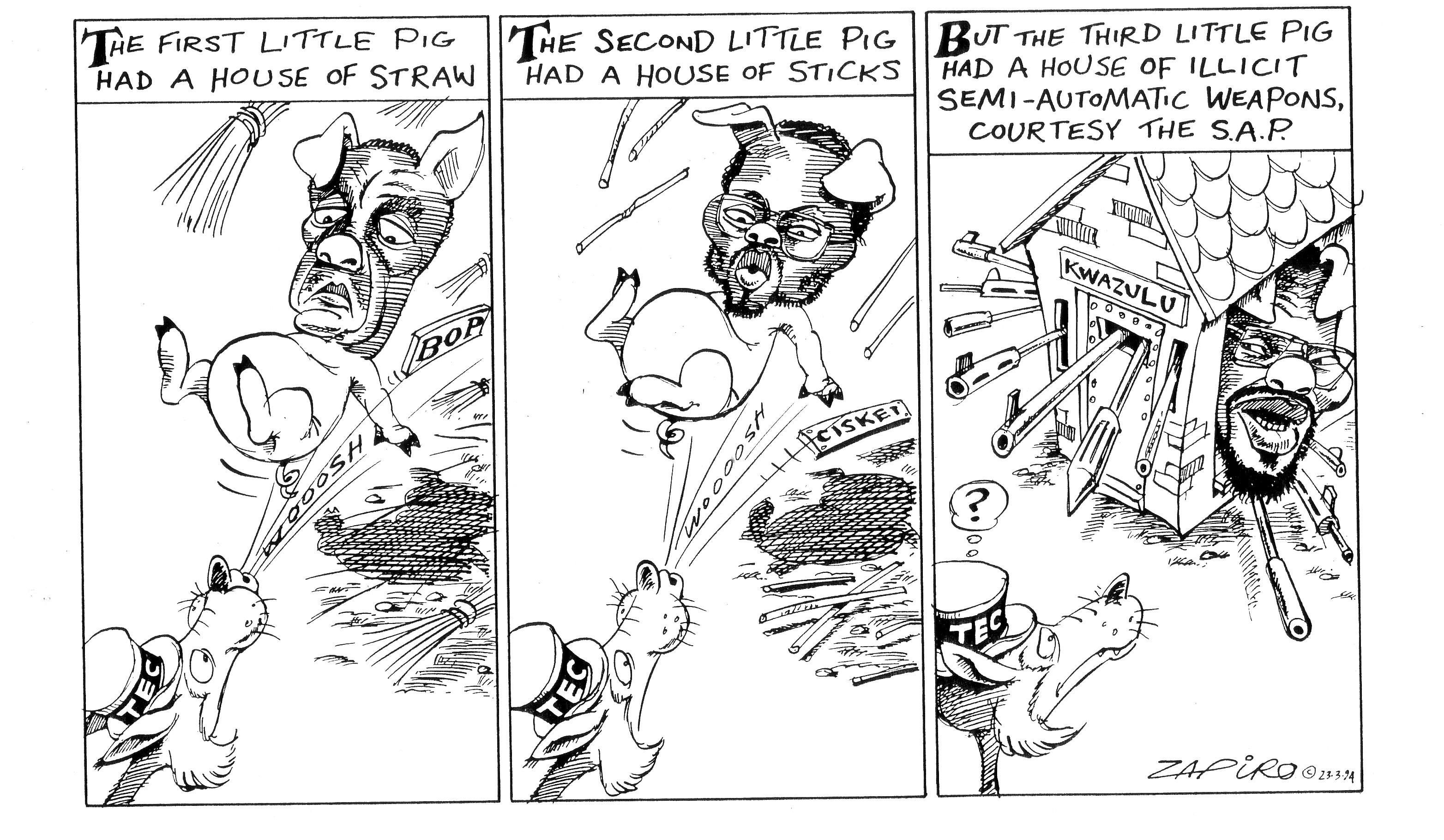 This 1994 cartoon tells the tale of the Transitional Executive Council, a multiparty body established to facilitate a peaceful transition to democracy in the lead-up to the 1994 elections. 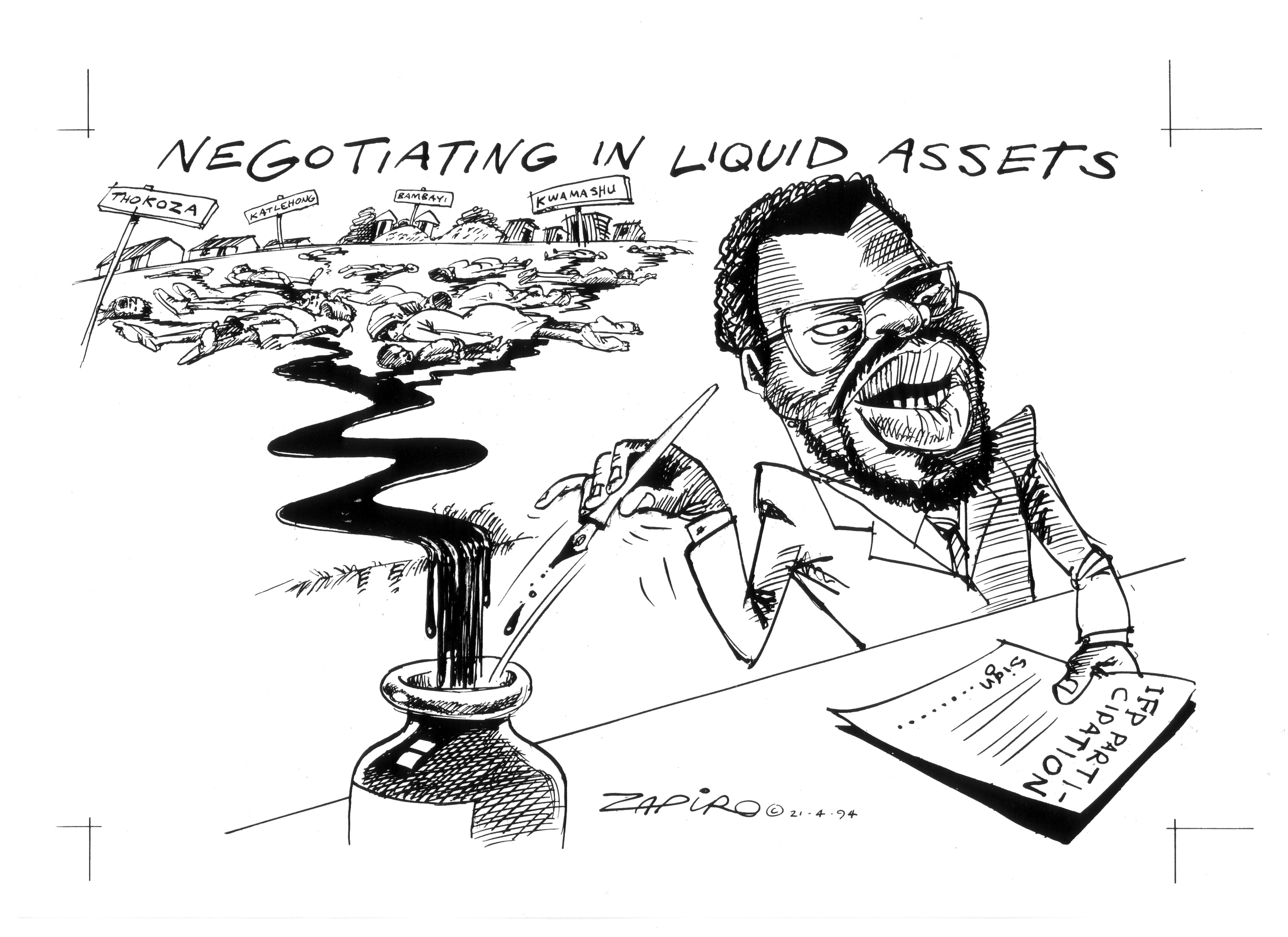 The 1994 elections were threatened by Buthelezi’s stubborn refusal to take part, and the ongoing carnage wreaked by his Inkatha supporters. He felt marginalised and was demanding international mediation. He held the election to ransom until just a week before the polling date when he finally agreed to participate, on condition that mediation would take place later. The last cartoon I published before the election on 27 April 1994 was about these events.

Thirteen years later, controversy erupted around this cartoon when it was included in a Grade 12 history textbook. Buthelezi railed against the cartoon in a speech to his supporters who then went on the march in KwaZulu-Natal and burnt copies of the book. The Department of Education capitulated to these displays and replaced the cartoon with another of mine for the forthcoming Afrikaans edition. 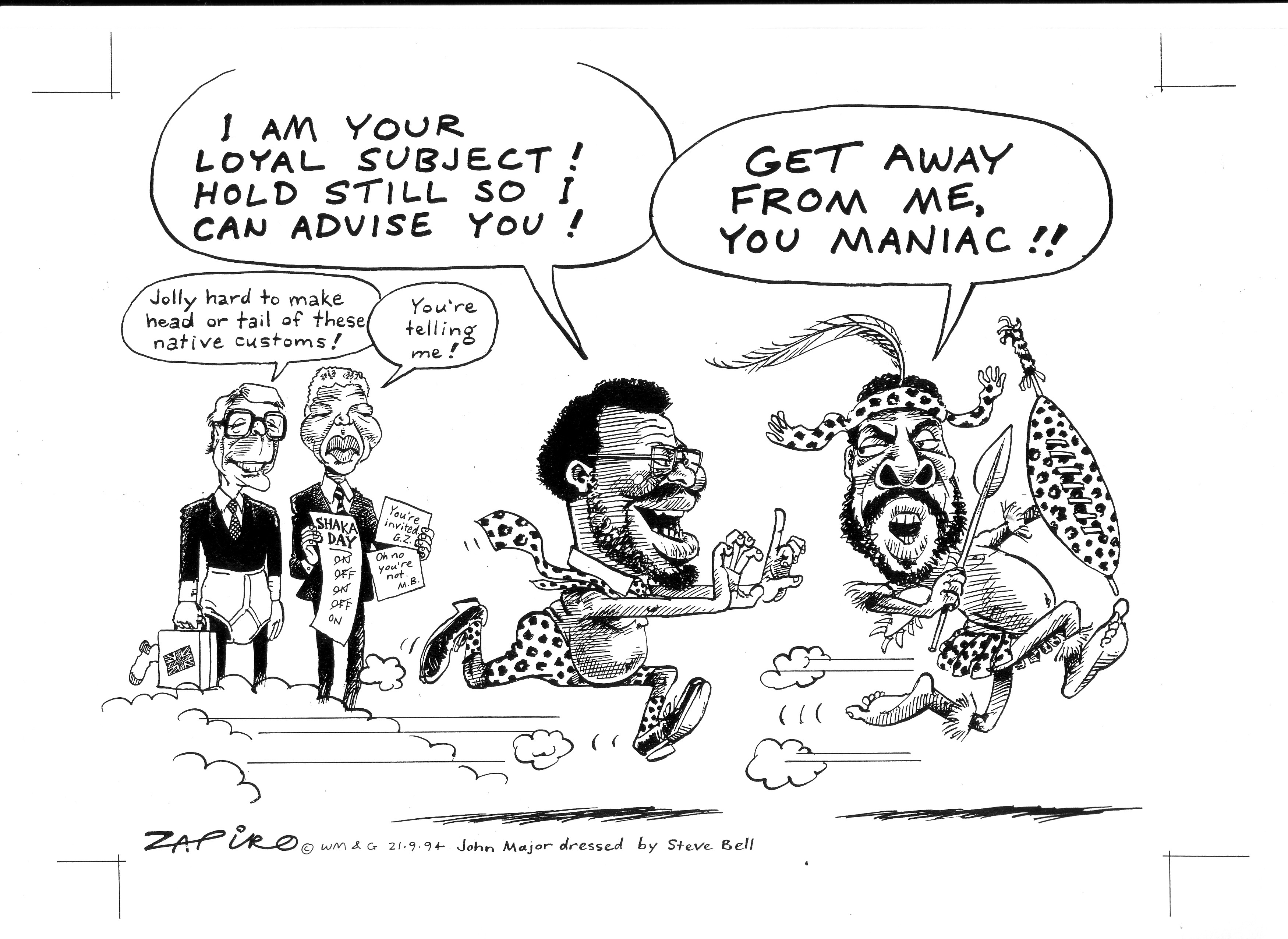 Still, in 1994, King Goodwill Zwelithini distances himself from Chief Mangosuthu Buthelezi, his uncle and long-time mentor. 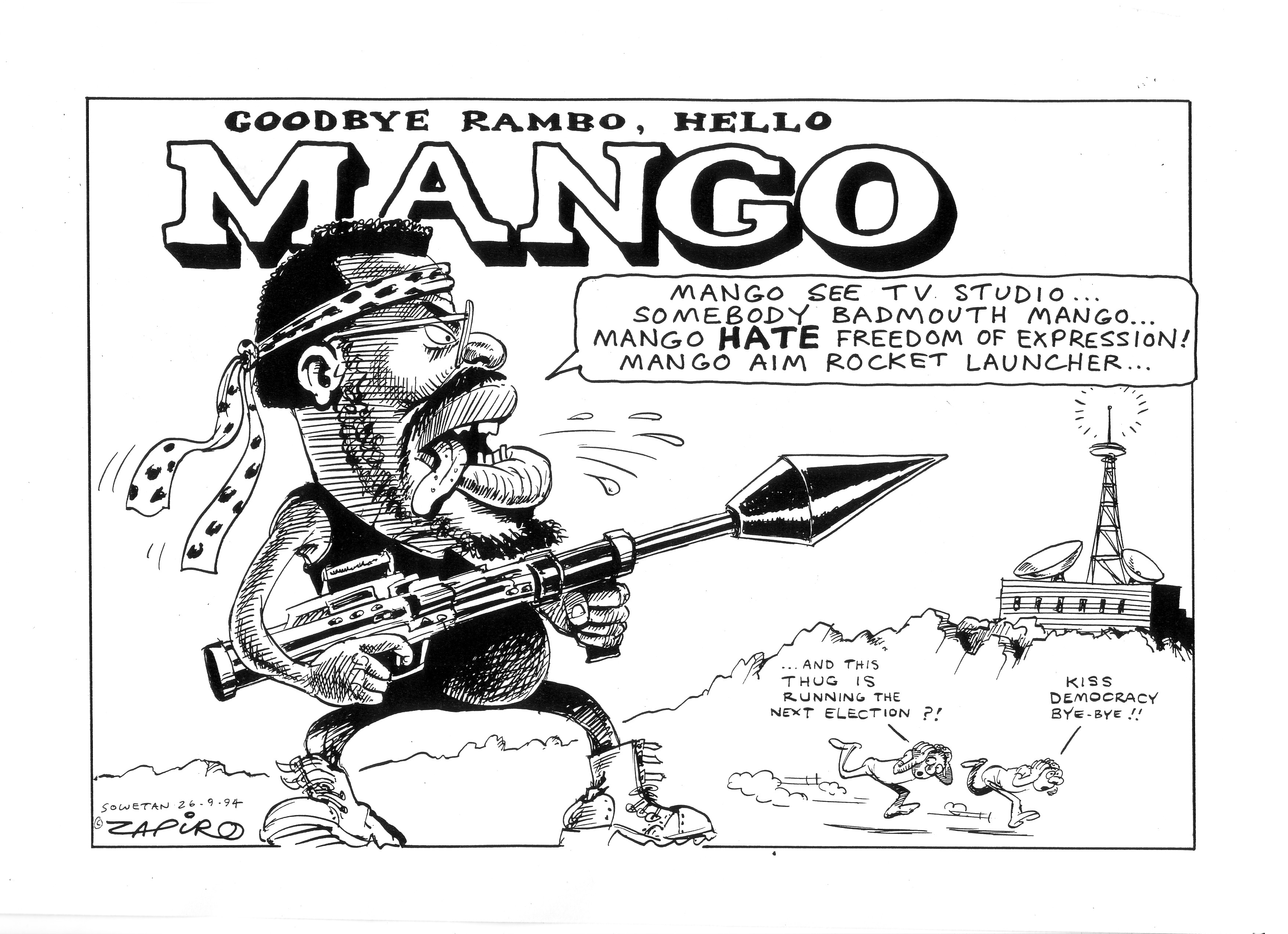 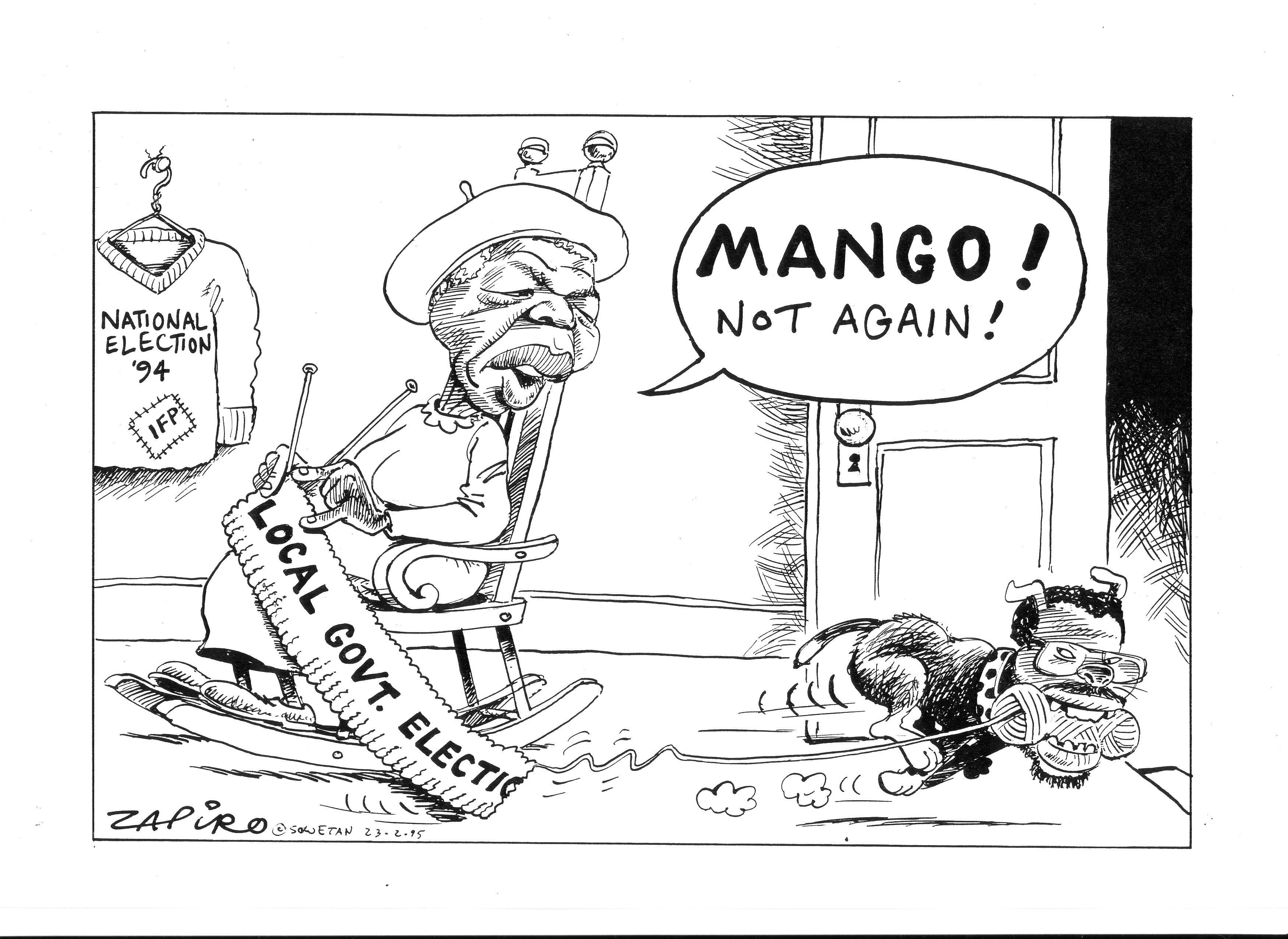 In 1994, as a cabinet minister in Mandela’s Government of National Unity, Buthelezi’s prickliness to criticism reached its zenith. Once, while the SABC was broadcasting a national television programme criticising him, he and some bodyguards stormed into the studio and demanded that the broadcast be stopped. This prompted me to draw him as Rambo, which quickly became Mango.

It was kind of mischievous showing President Mandela calling him “Mango” in a cabinet meeting, particularly because he’s also prickly about how people address him. He referred to Mandela as Dr Mandela, and I’m sure he did this because he wants people to call him Dr Buthelezi. Few people who have honorary doctorates want to be called Doctor. Mandela certainly didn’t, despite his world record – he had more than 300 of them. 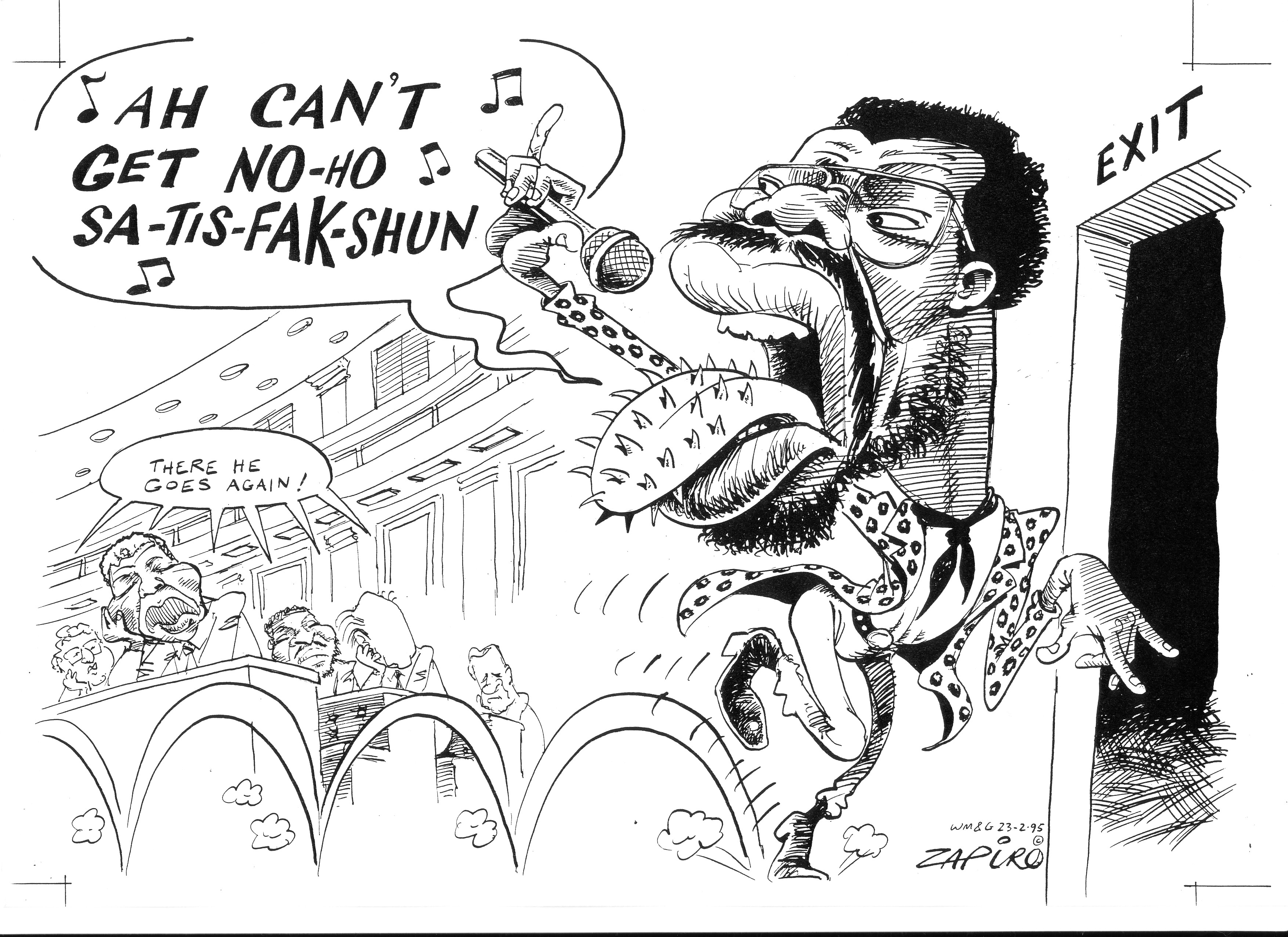 Buthelezi became infamous for insisting that his followers be allowed to carry their so-called “traditional weapons” to political gatherings. In 1995, as one of the most explosive members of the Government of National Unity, he perfected a new kind of traditional weapon – the walkout. There were various versions of this strategy, from non-participation in local government elections to an elaborate secession plan for KwaZulu-Natal. The Rolling Stones had recently played in South Africa as part of a world tour, and the Stones’ songs were on everybody’s lips. The band’s trademark prickly tongue logo, combined with their famous line, summed him up beautifully. 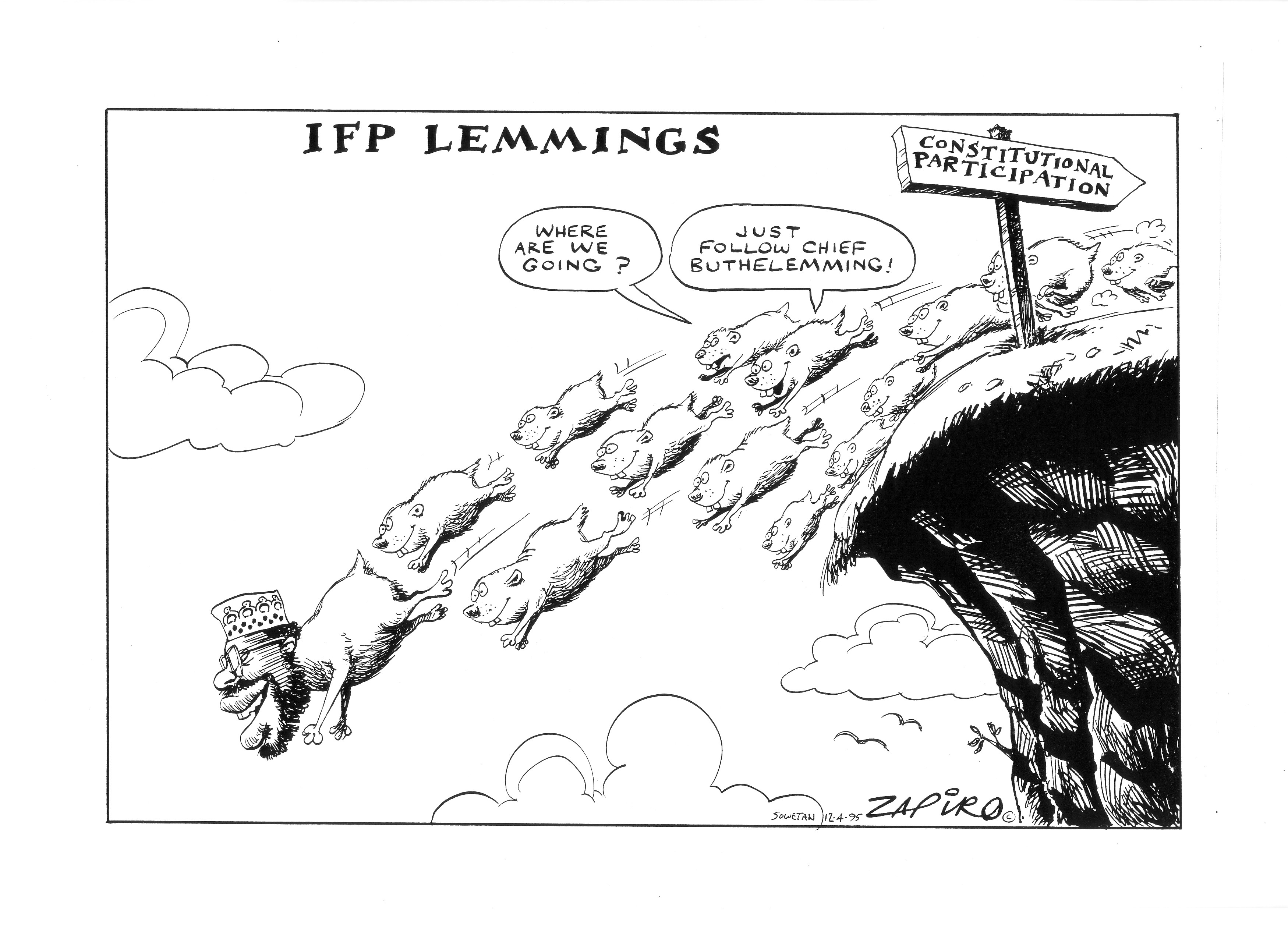 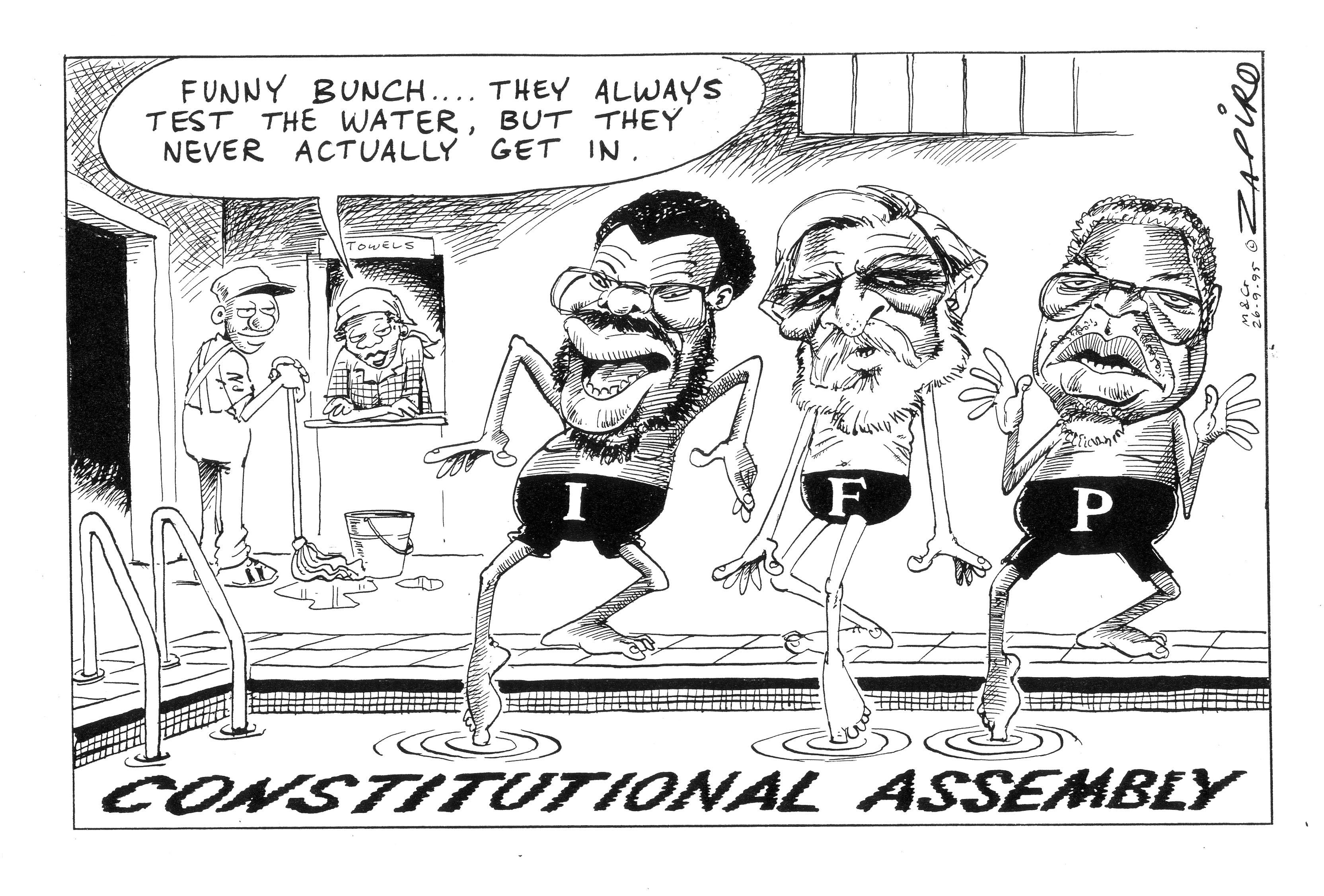 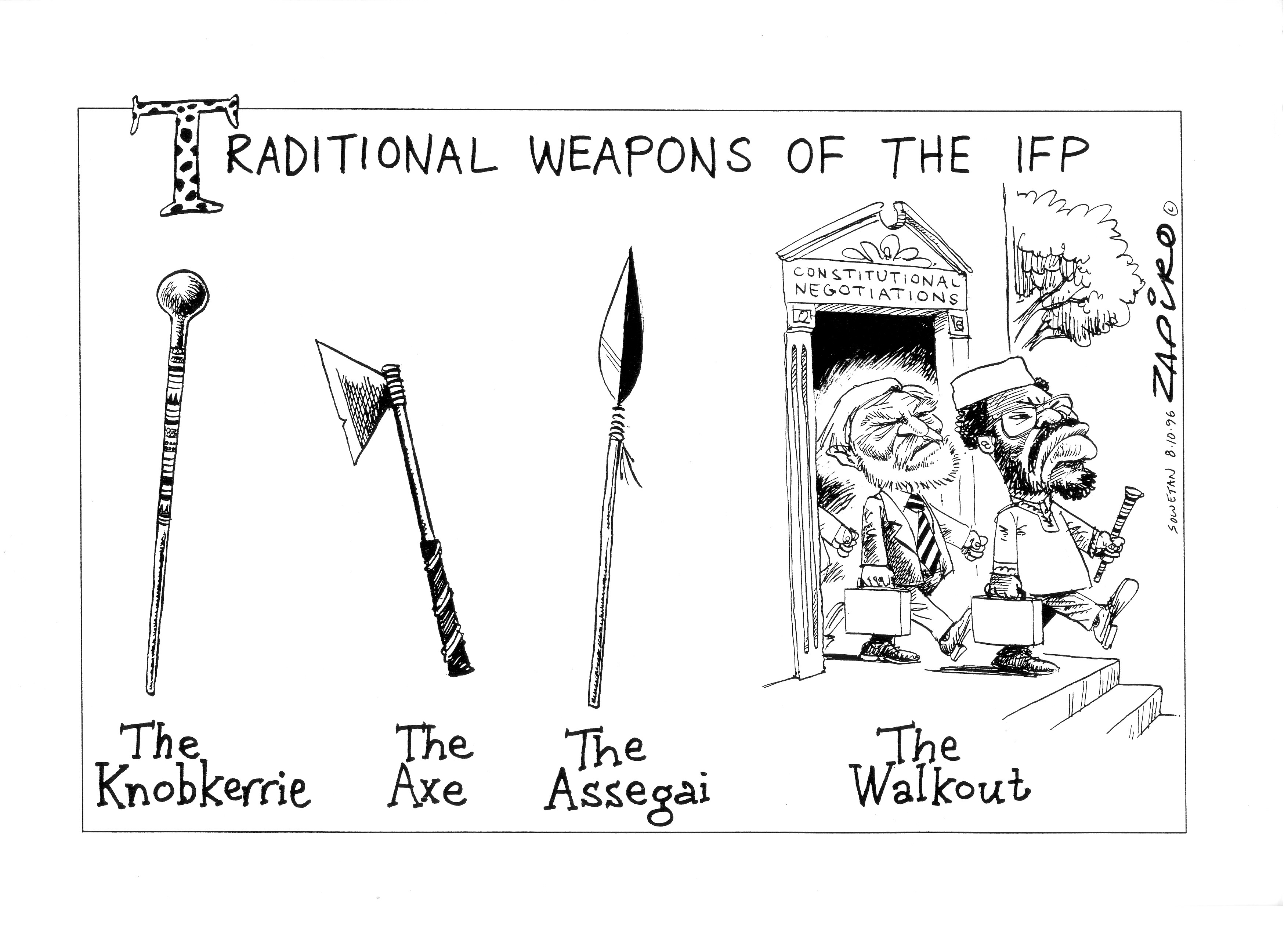 These five cartoons from 1995 and 1996 reflect that every time it seemed some aspect of the constitutional process was stitched together, Buthelezi would pull it apart. His constant unpicking of other people’s work was  a real stumbling block and must have caused Mandela endless frustration. Buthelezi was like a stuck record, constantly harping back to the idea of federation, and to the international mediation he claimed he had been promised in return for his participation in the Government of National Unity. 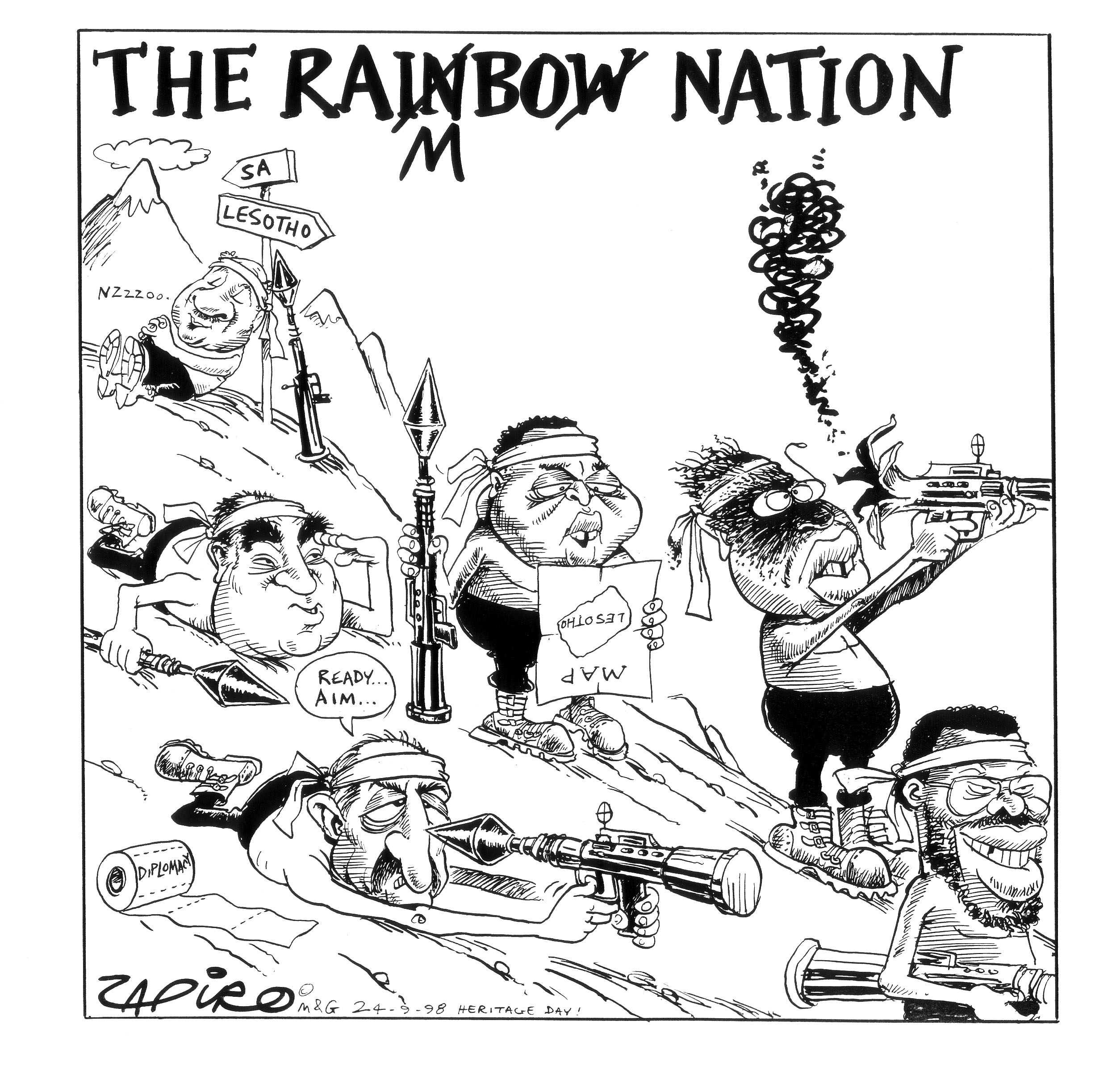 Rocked by protests in 1998, Lesotho requests help. Acting President Buthelezi sends troops, which is when the real rioting starts. 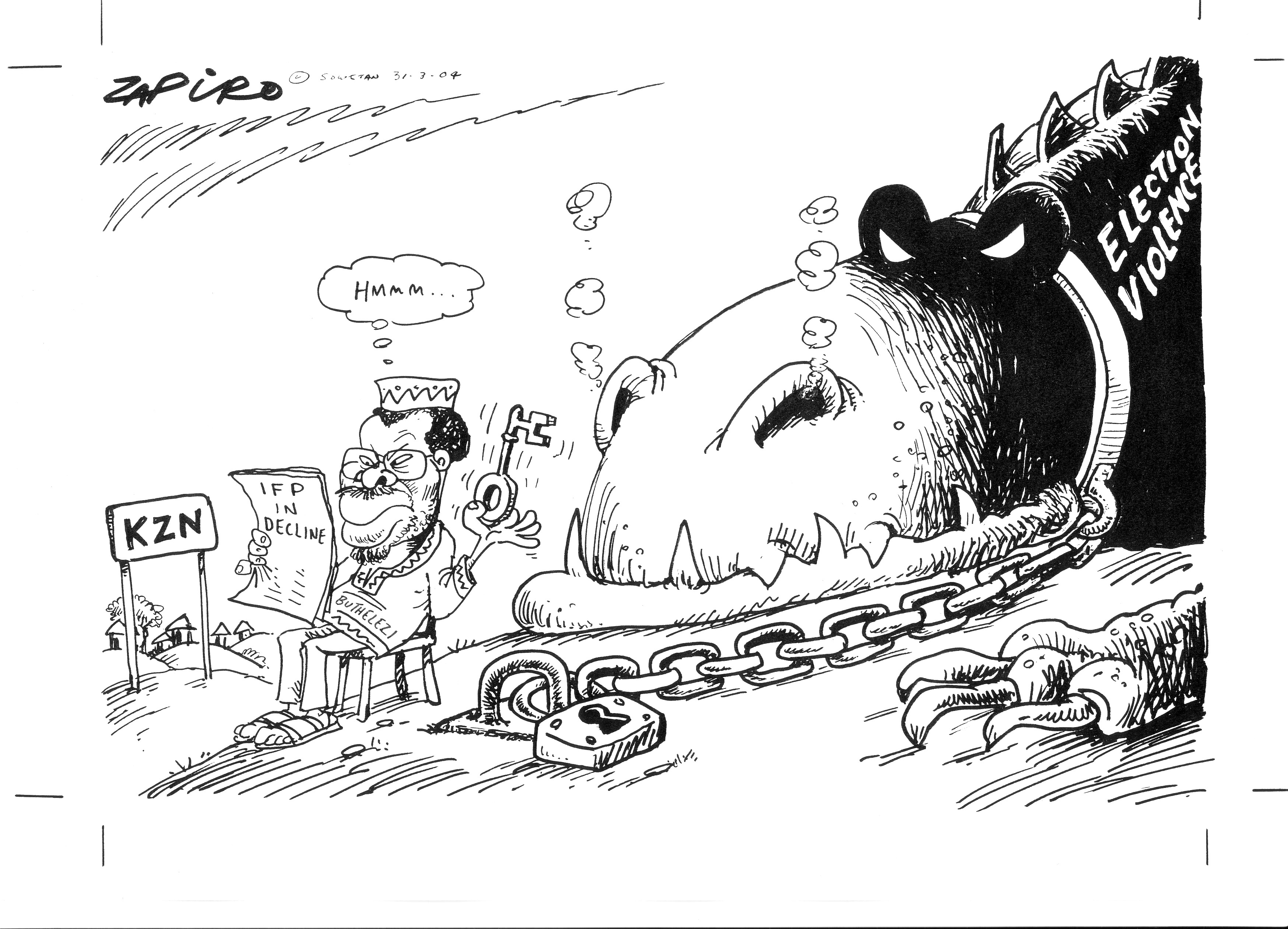 Just before the 2004 general elections, Buthelezi called an ANC suggestion that he retire ‘killing talk’ that could reignite KwaZulu-Natal violence. 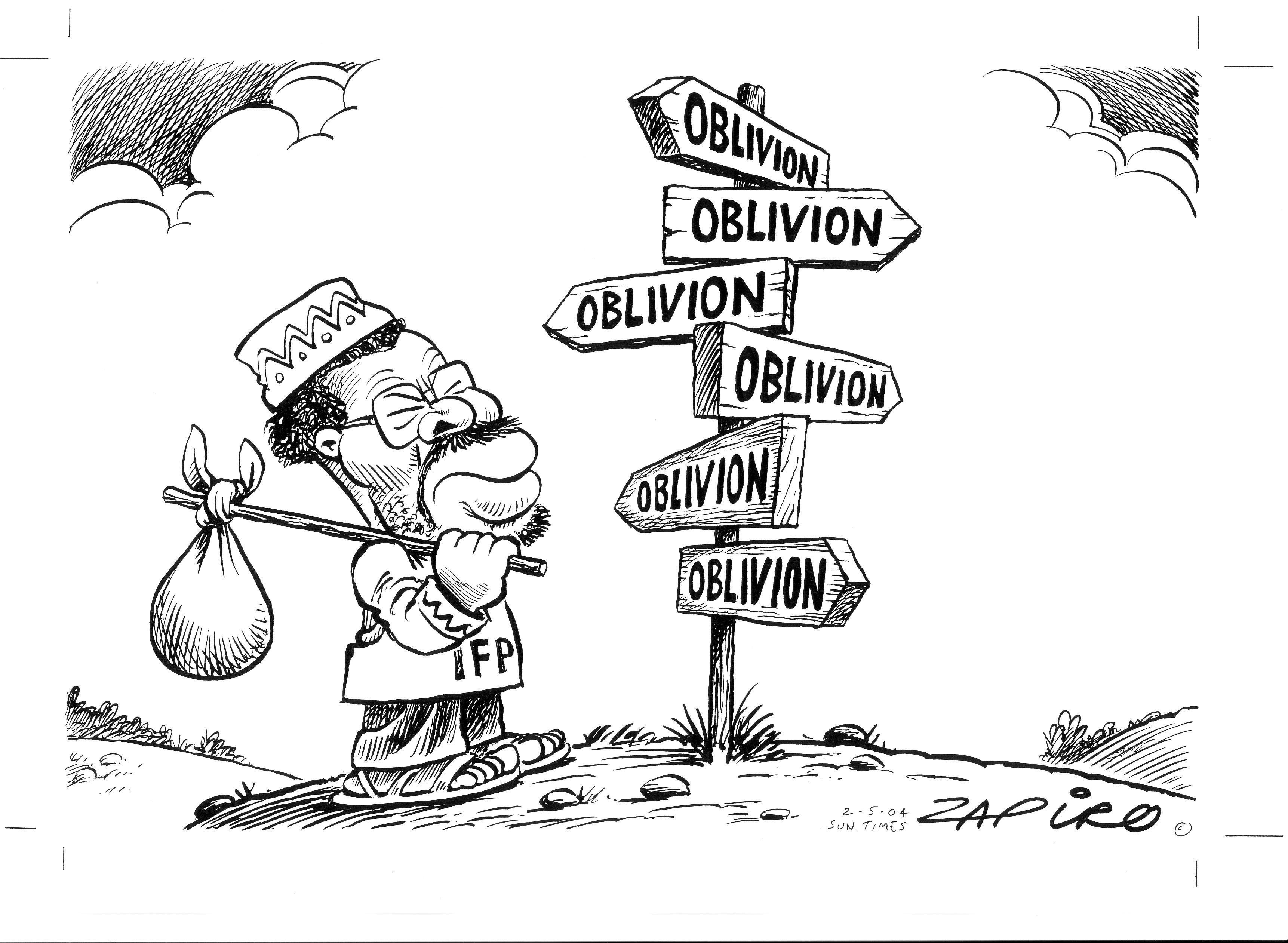 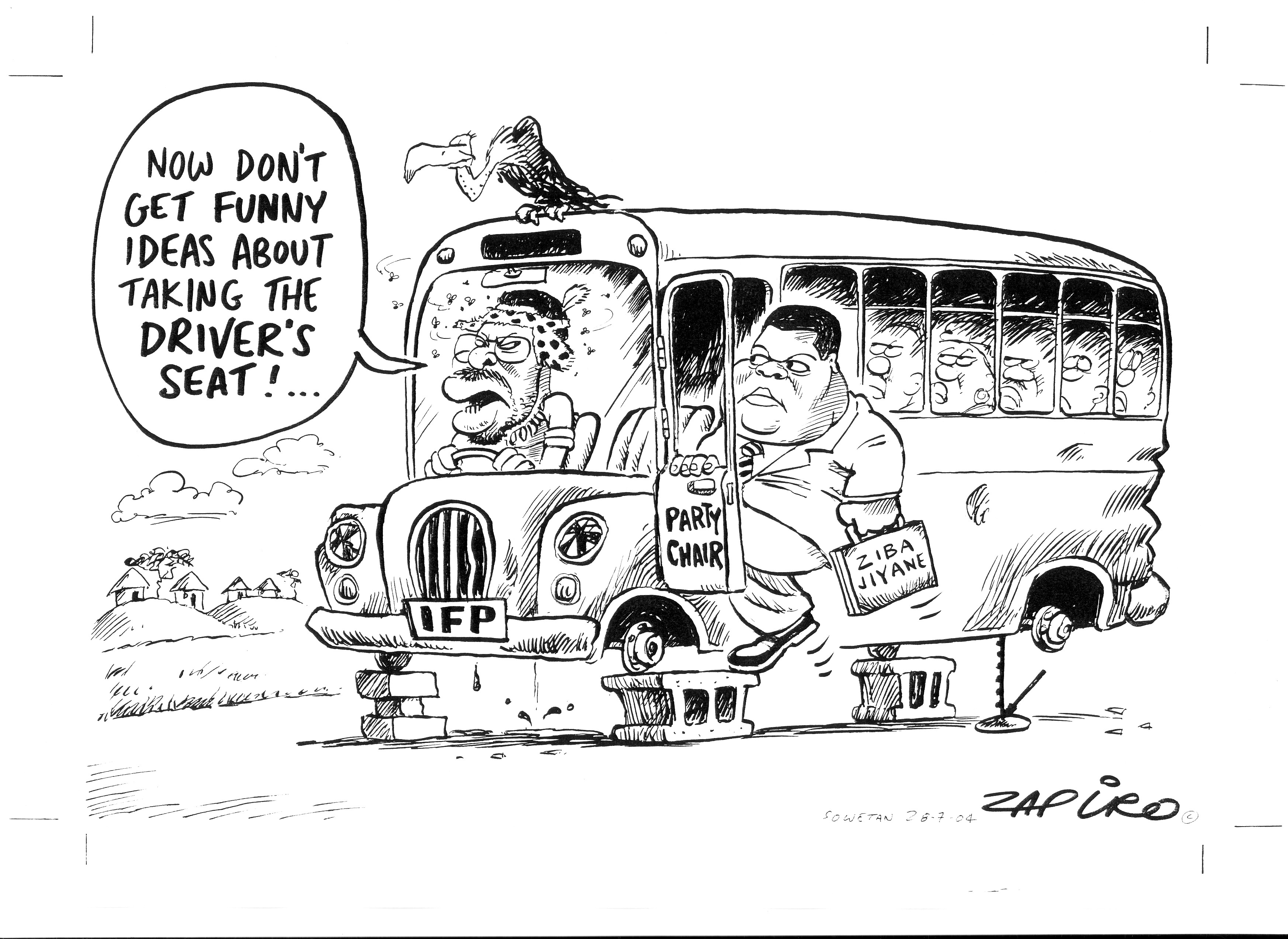 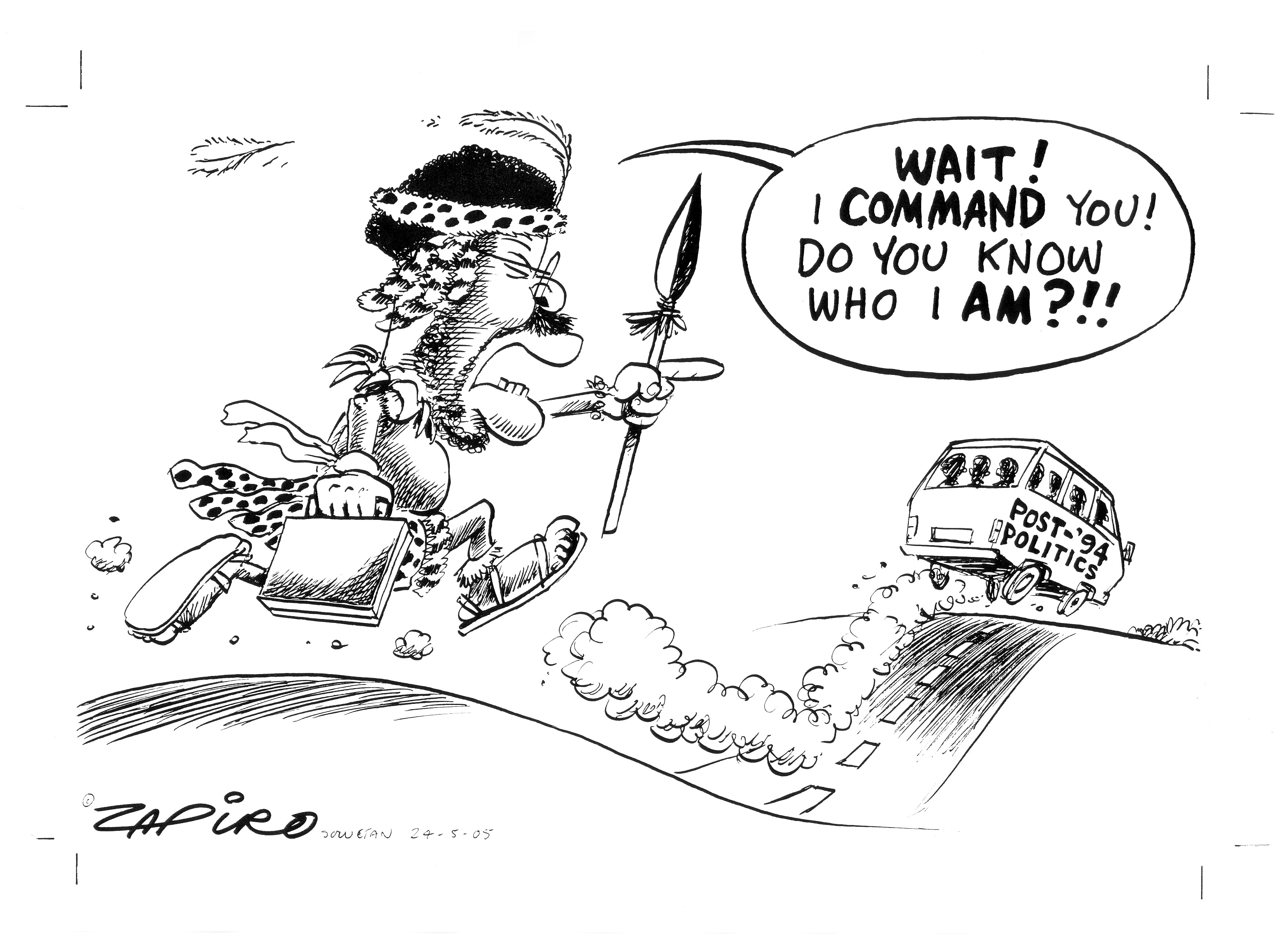 These three cartoons, drawn after the 2004 elections, reflected on the IFP’s electoral slump. Buthelezi was out of Cabinet, out of favour, out of touch and losing his grip on the waning IFP. 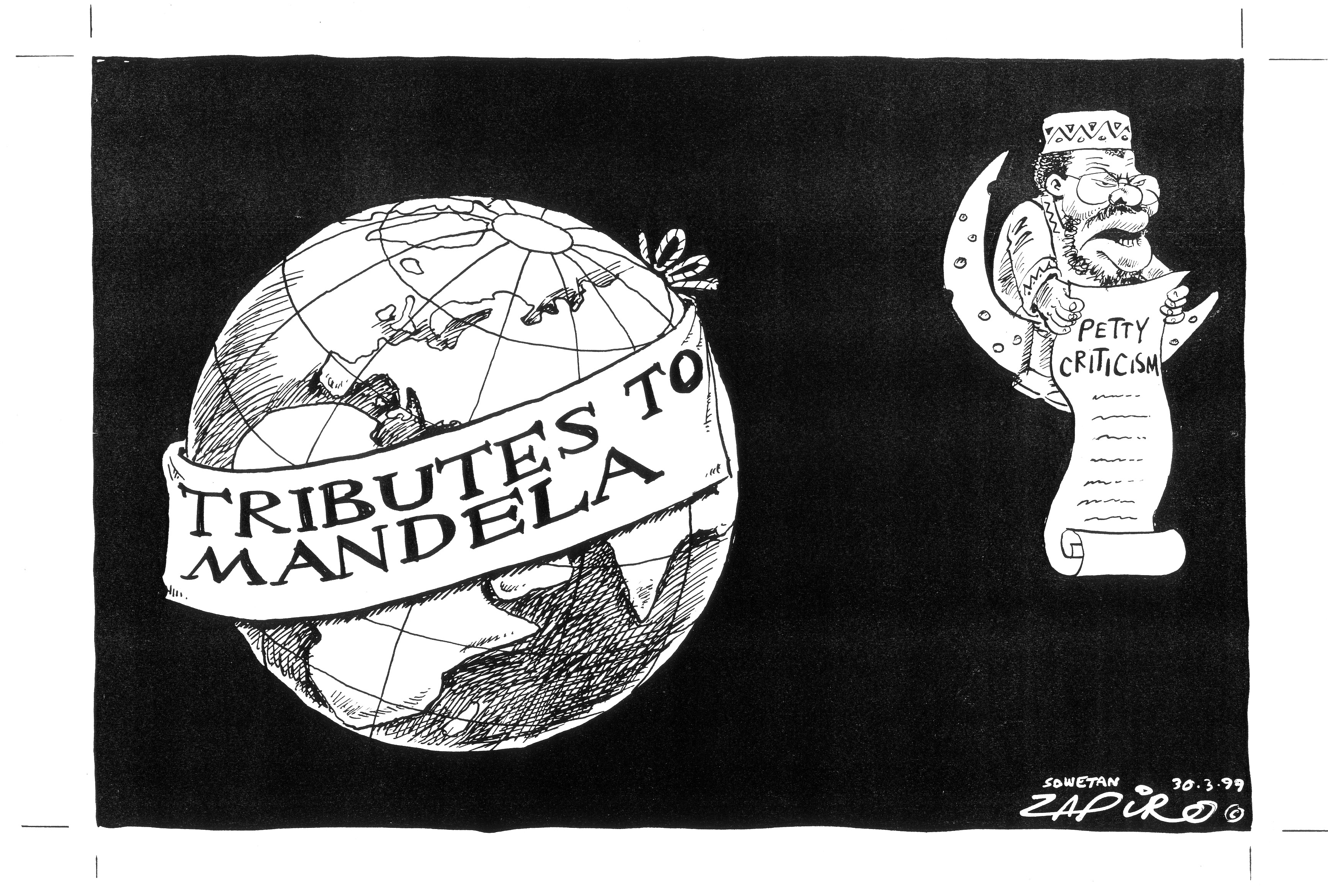 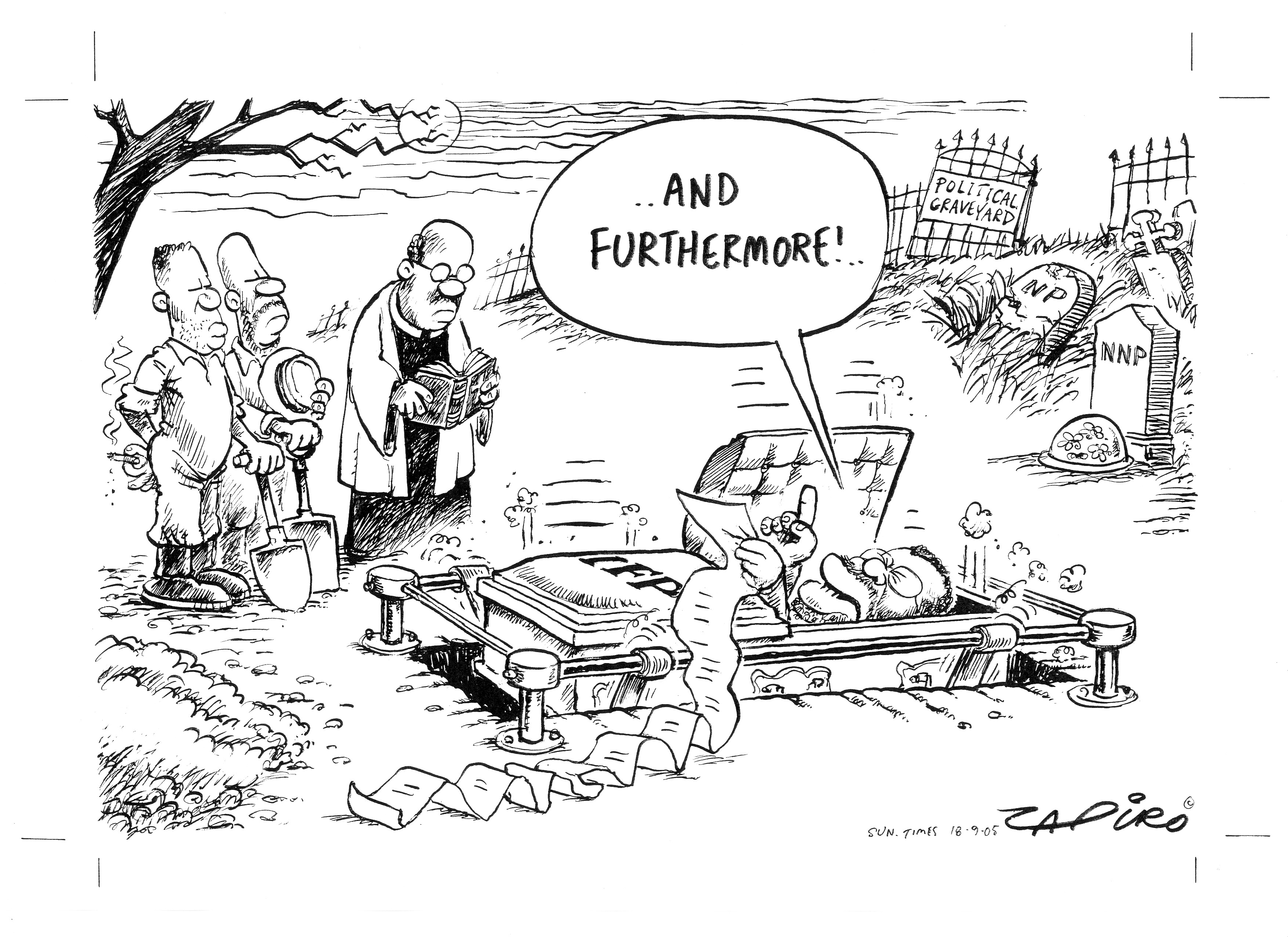 Buthelezi’s long speeches are legendary. I sympathise with any hapless Inkatha member who landed up in the front row when Buthelezi was on a roll. I’ve heard of speeches that had to be carried over from one day to the next. There’s even a story of one that went on for three days. 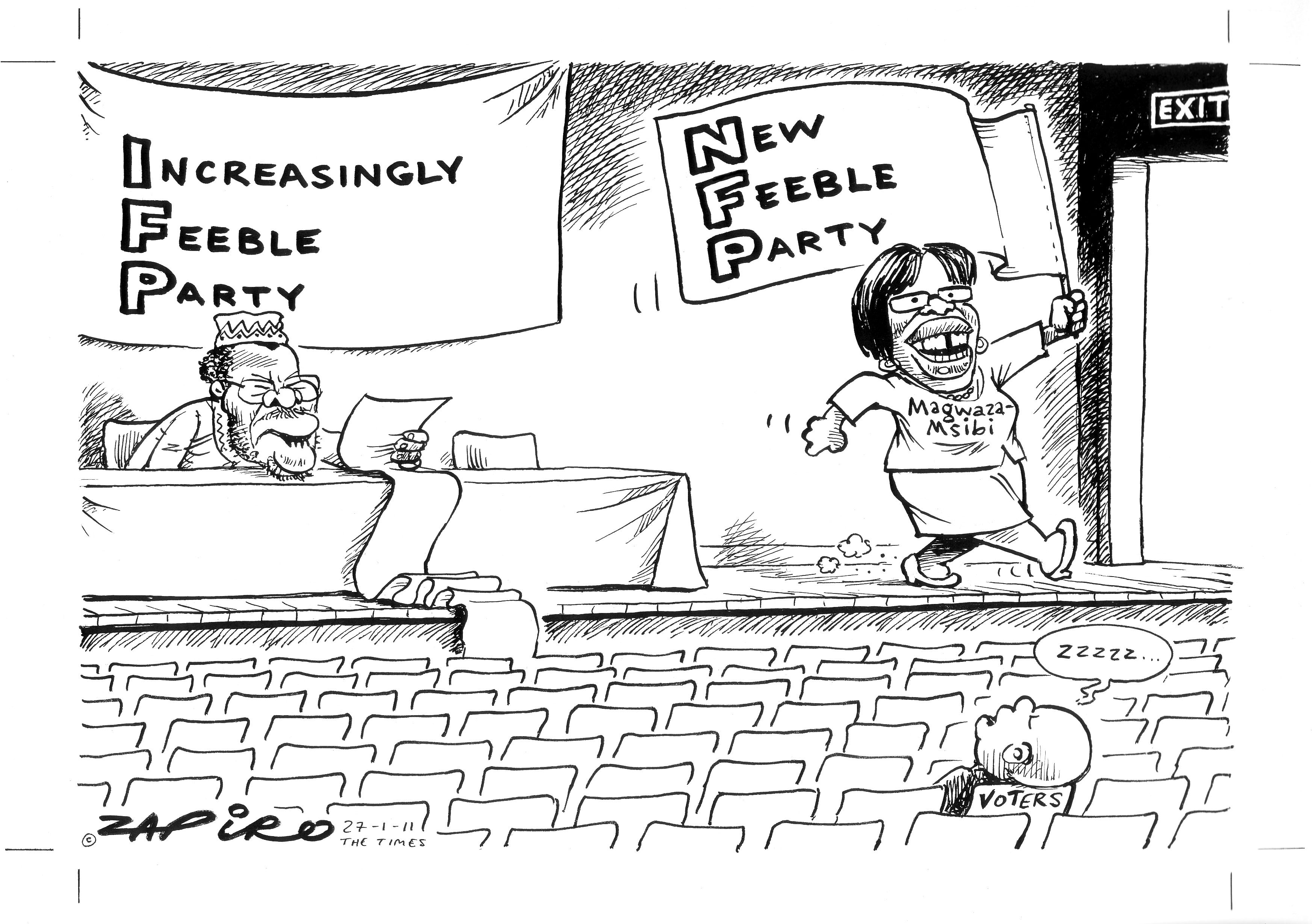 By 2011, Mangosuthu Buthelezi has led the ailing IFP for almost four decades. When party chairman Zanele Magwaza-Msibi fails to unseat him, she forms the National Freedom Party. 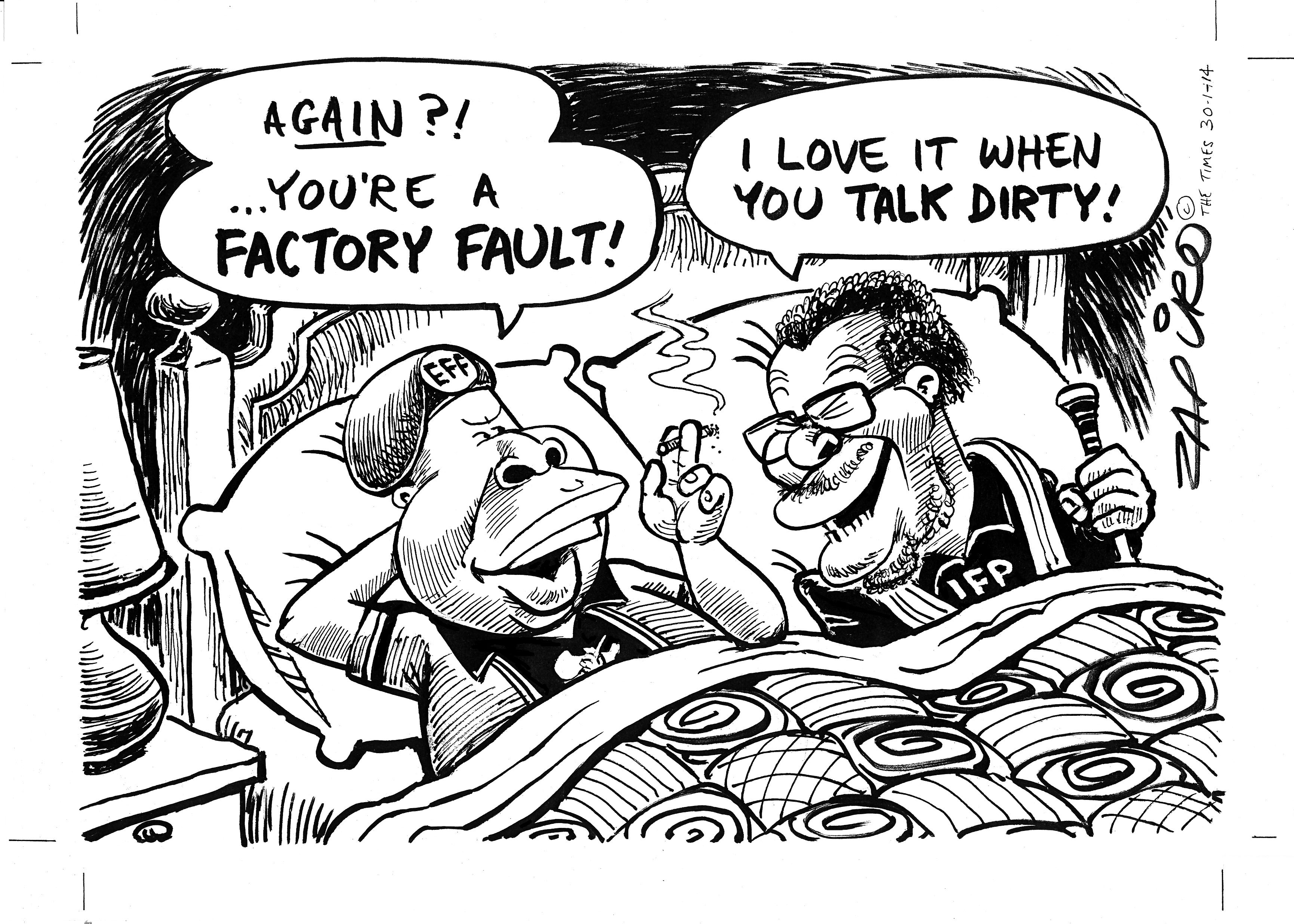 The young and the old of SA politics publicly reconcile in this 2014 cartoon, after EFF leader Julius Malema had famously called Buthelezi a “factory fault” and been described as an “ill-bred brat” in return. DM