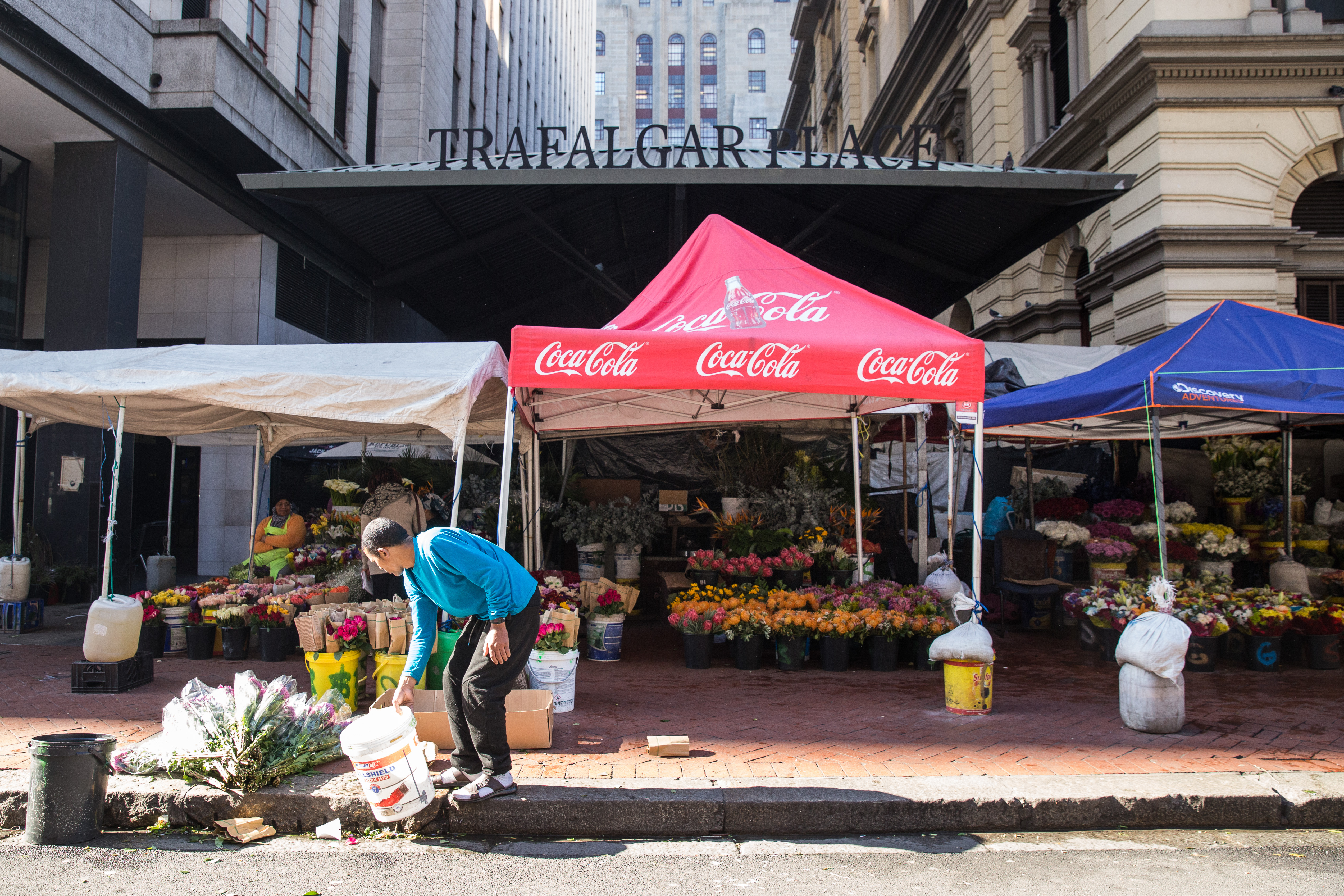 The famous Trafalgar Place flower market in Adderley Street has been around for over 100 years.

‘Everybody in the family is here, cousins, aunties and great aunties’

“Hello my angel, another bunch,” says Fadwah Sasman, excitedly pouncing as a man enters the Trafalgar Place flower market off Adderley Street, Cape Town. She offers him three bunches of roses for R100.

“I am her customer since last week. I am taking the flowers to a new woman I am trying to impress,” the man tells GroundUp.

“Last week when he came down the stairs, his eyes went there, and my eyes went on him. Since then he has been coming back for flowers,” says Sasman.

The market is the “most famous place” she says. She is the fourth generation to run the family business which started selling flowers in 1890.

The trading area is divided into 12 stands. The stand owners rotate, clockwise, to allow each trader to get a chance at a prime spot. The top stands are the most lucrative.

“We came here as children. We watched our mothers handing over flowers, making arrangements and that is how we learnt,” says Sasman. “When it’s big days like Valentine’s, we all helped.”

She used to work for a medical aid company but got frustrated with the job. She then came to work with her 77-year-old mother, who is the oldest trader presently at the market. Her mother raised eight children with proceeds from the sale of flowers, three of whom still work in the business. “Here I enjoy meeting new people. You meet different types of people and I know how to handle each personality, merely by looking at them,” says Sasman.

Sasman works from 6am to 6pm. When she arrives in the morning, she takes the flowers out and sets them up for arrangement. The family pays two men to watch the premises at night.

She says the main challenge her business faces is parking space for clients and competition from big retailers such as Woolworths and Checkers.

“You park to get a bunch of flowers for R100, and then you get a fine for R1,000. It’s also a tough business. There is no replacement for dying flowers,” says Sasman.

Ilhaam Benjamin, her cousin, has worked with flowers from the age of six. “Our breakfast and supper were flowers … We spent the whole weekend cleaning flowers and making bouquets. Everybody in my family is here, about 19 of us, cousins, aunties and great aunties.”

She said it was a crime to pick flowers in parks. The traders buy all the flowers they use for business, mainly flown in from Joburg in winter when Cape Town produces few flowers.

She said most farmers send their quality flowers for export. “Sometimes they reduce prices for us, but once flowers are cheap, you must also sell them cheap.”

Benjamin said because of the tough economic conditions, many people didn’t have a budget for flowers any more, but established customers such as function, party and wedding planners and churches kept them in business.

She said they maintained high standards. “It is very important to steal your customer’s heart, otherwise we would be sitting at home doing nothing.”

She said they don’t turn away customers with a low budget. They don’t work on fixed prices, unless on occasions like Valentine’s Day and Eid.

Benjamin said the flower business was very difficult. “We make it look good because it’s the only trade we are in. This week you have money, next week you don’t, because flowers are perishable.”

Located in Parow, Mcintyre Florist Enterprises is run by couple Peter Ram and Randal Ram. They specialise in major merchandise for events like wedding functions, birthdays and anniversaries, company events and funerals.

“Many of our new customers are surprised to see men here. It’s rare to see men doing flowers, you would expect females to run such a business, but at the end of the day, what matters is what pays your rent and puts food on the table,” says Peter.

He says the flower business helped him to get his life together. He started as a cleaner about five years ago until he learnt to work with flowers.

“Before that I was staying on the streets doing drugs,” he says.

Clive Ram, his cousin, says Mcintyre Florist Enterprises is a third generation family business. His grandmother, Marie Johnson, moved from Trafalgar and started the business under a tree. “But today, we rent this space for R3,000 a month.”

Most of the flowers are couriered from Joburg while the few they buy come from Engelke Blomme wholesale flowers in Wetton. “There is nothing here in Cape Town in the winter,” he says.

Clive was born into the flower business. At the age of 13, his grandmother taught him to make flower arrangements.

“This business supports a family of seven that lives only on flowers income,” he says.

Prices for bunches range from R200 to R650. He said business was slow during the week, especially on Mondays, but weekends were busy.

Peter said they enjoy the benefits of having long-established and loyal customers who keep on returning and making referrals. “The business has been in this vicinity for more than 50 years.”

They also do marketing on Facebook and hand out fliers. DM