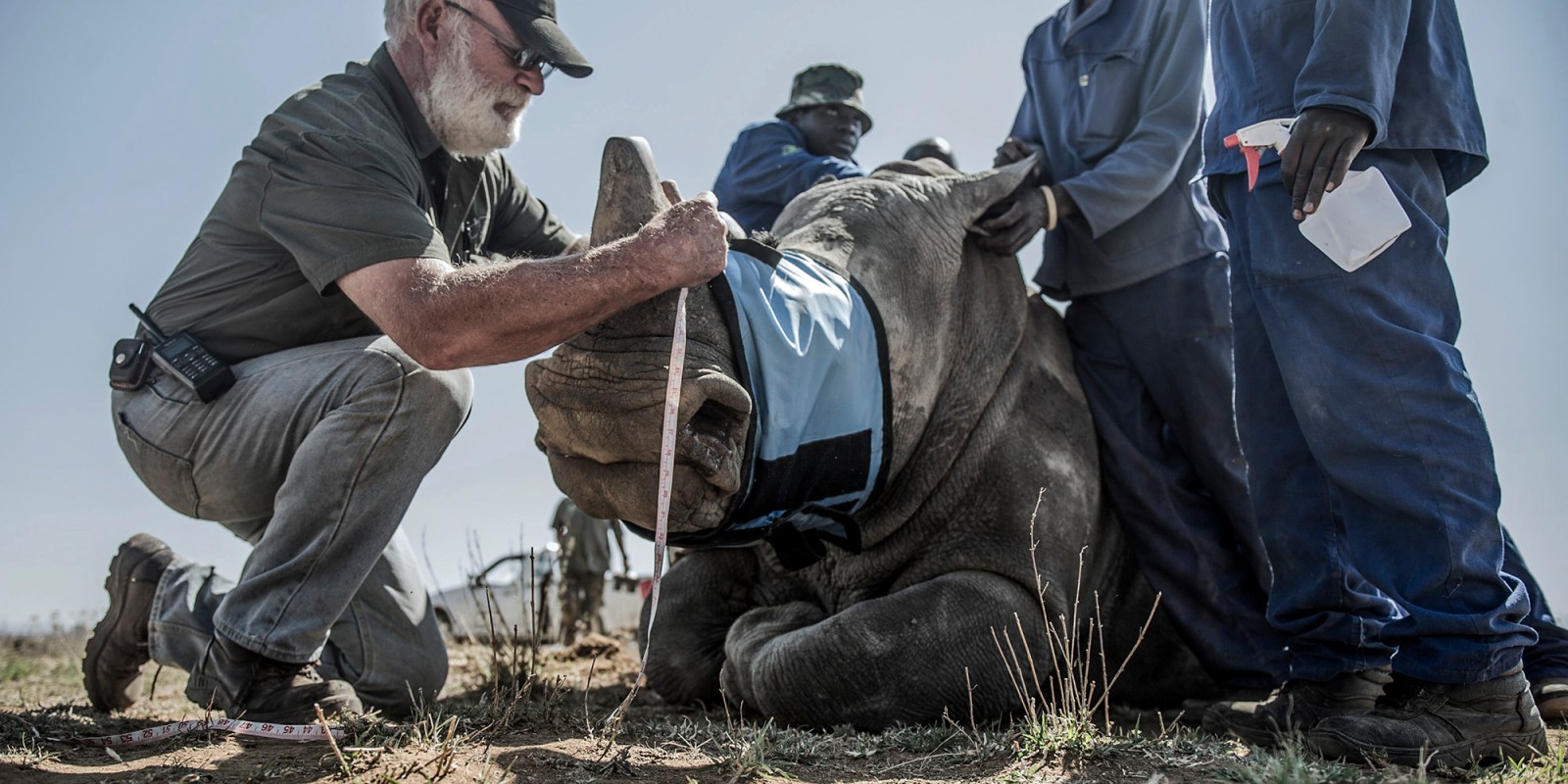 A rhino is drugged before its horn is removed at John Hume's farm in Mpumalanga. (Photo: Gallo Images / Rapport / Conrad Bornman)

John Hume, the owner of the world’s largest private rhino population, has almost run out of finance to maintain his herd. He is planning to sell off a Mpumalanga nature estate next month and it might be the last roll of the dice for a man who gambled on rhino horn becoming a tradeable commodity.

More than 1,700 white rhinos roam John Hume’s ranch in North West, which makes him the biggest private owner of the species by far. The global population of all five rhino species is about 25,000, so he owns about 7% of the rare creatures.

He also has a stockpile of five tonnes of rhino horn, harvested from his herd over the years in dehorning operations.

He has not had a rhino killed by poachers in well over two years, which makes his operation a conservation success story.

A real estate tycoon in a former life, Hume has one more major asset (after his horns, animals and working ranch): the 6,600ha Mauricedale Nature Estate just south of the Kruger National Park.

This week he said he would put this property under the hammer on 25 September 2019. A decade ago, the estate was valued at between R490-million and R523-million, but the current real estate market is chilly.

The sale move follows an unsuccessful appeal for partner investors in his rhino-breeding project.

“Our appeal for alternative funding and/or investment from the world at large has to date proven entirely fruitless,” said Hume, adding that the sale was a “final and desperate attempt” to keep his operation afloat. He has already sold other property assets to do just that.

Hume told me a few months ago that surging security and feed costs had put his project just months away from collapse. He had spent about $150-million of his own money over the past 25 or so years to grow the rhino herd.

The man has a passion for the animals, but he is also a businessman who has long lobbied for the lifting of restrictions on international trade in rhino horn. At going black-market rates in Asia – where red-hot horn demand is driving the current wave of poaching – his stockpiled five tons could conceivably fetch $275-million.

Hume’s latest move comes against the backdrop of the triennial meeting, being held in Geneva, of the Convention on International Trade in Endangered Species (Cites), the UN convention that regulates global trade in wildlife and its derivatives.

At the meeting, Eswatini has proposed to down-listing of the conservation status of its white rhino population – which would allow it to trade its horn stocks internationally. The proposal is unlikely to gain traction, as was the case with a similar attempt in Johannesburg three years ago.

The pro and anti-trade arguments are well known, are being hashed out again, and do not need repeating here. But one point to be made is that “faunal” or “megafauna” privatisation has clearly aided conservation efforts. Without private initiatives such as Hume’s, there would be fewer rhinos on the planet.

A survey last year, conducted for the Private Rhino Owners’ Association, found that almost 7,000 white rhinos, or 46% of an estimated 15,200 national herd in South Africa, were privately owned. By contrast, populations in state parks, at the epicentre of the poaching crisis, have been falling. In 2010, the number of white rhinos in South Africa was estimated by the International Union for Conservation of Nature to be 18,800, with more than 14,000 on state land and 4,000 on private farms. The government-owned total number has since almost halved, while the private figure almost doubled.

Hume has certainly taken a gamble and is unlikely ever to get a return on his substantial investment in rhinos. But if he cannot afford to keep them any longer, will there be any takers for a significant chunk of the world’s rhino population? BM