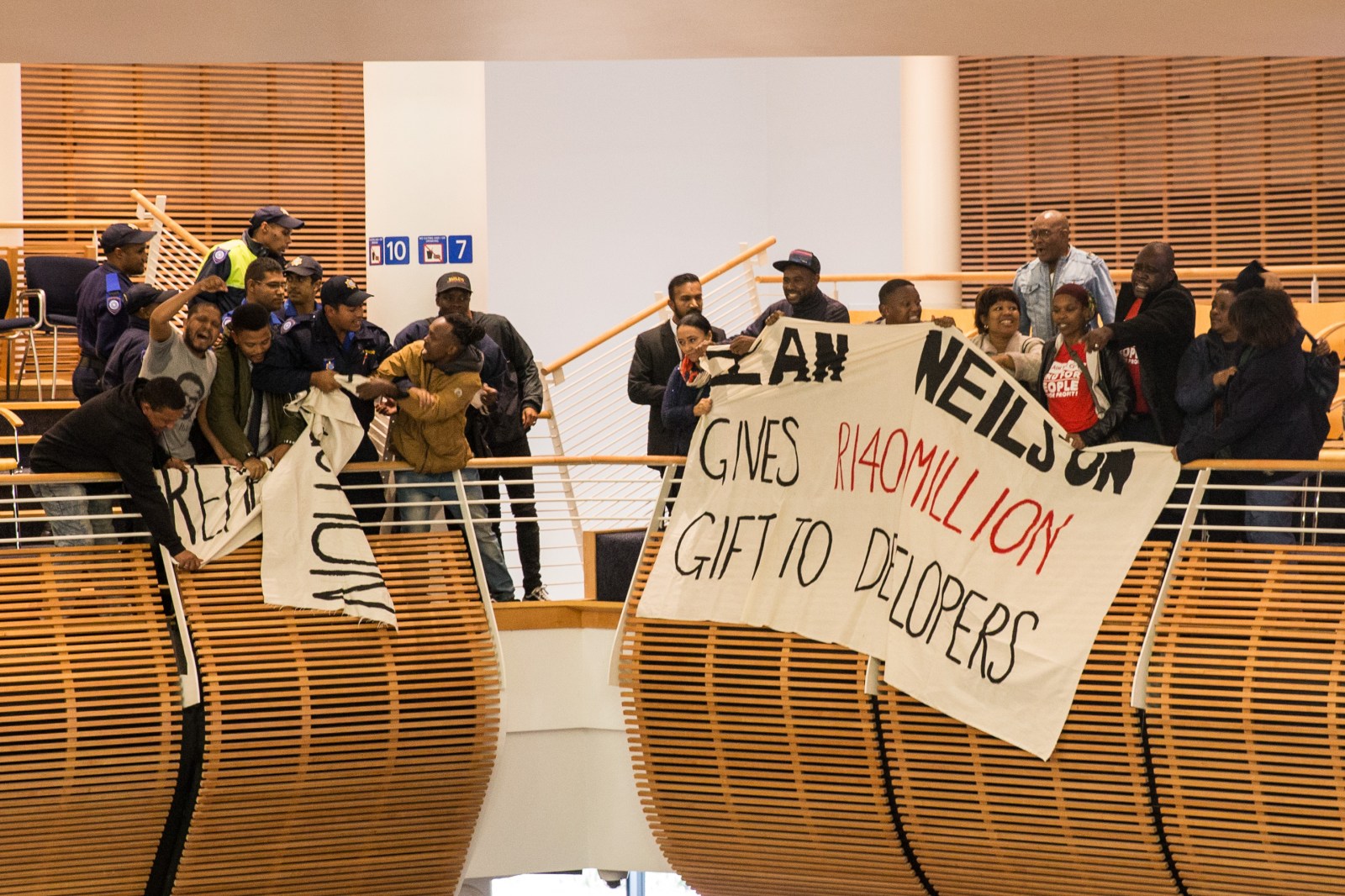 Reclaim the City activists briefly disrupted a Cape Town City Council meeting in May during which they highlighted their dissatisfaction with the sale price of Site B on the Foreshore. Archive photo: Ashraf Hendricks

A forensic investigation into the controversial sale by the City of Cape Town of prime land on the Foreshore has cleared the City of accusations that the land was sold too cheaply. Nevertheless, troubling questions are raised by the report.

The 2016 sale of the former power station site, known as Site B, to property group Growthpoint garnered attention last year after it was reported that the City had undersold the land to the tune of R140-million.

Following accusations from housing rights organisation Ndifuna Ukwazi that the City undersold the land, as well as a protest and subsequent court case, then Mayor Patricia de Lille commissioned a forensic report which has finally been released to the public.

The report finds that City officials including De Lille and then Deputy Mayor Ian Neilson knew that the land could be sold at a higher price under certain conditions, but opted rather to sell it quickly.

The land was advertised — and subsequently bought — with a maximum permissible floor area or “bulk rights” of 17,500m2. (Permissible floor area is the potential floor area of a future building.) If the City had opted to investigate the land’s bulk rights by way of an application, the property could have been sold for more, Director of Property Management Ruby Gelderbloem is reported as having said. Gelderbloem says she informed Neilson of this, but Neilson argued that the process would take time and Site B, which had been standing vacant since 1994, needed to be sold as quickly as possible.

Neilson is currently on sick leave but City of Cape Town spokesperson Luthando Tyhalibongo told GroundUp changing the rights on the property would have taken a significant amount of time.

“The City achieved full market value, taking due cognisance of potential and town planning restrictions, at date of sale.”

GroundUp also contacted the office of former Executive Mayor Patricia De Lille, who led the Strategic Asset Committee at the time of the sale, asking if the Mayor had known Site B could have been sold for more. De Lille’s spokesperson Zara Nicholson said De Lille had asked for a forensic investigation in order to “give the public and civil society groups the assurance that the City did not undervalue the land or run a loss on the sale”.

The investigators say Siraaj Slamang, Valuations and Property Management Senior Professional Officer, did consider the possibility of selling the land with additional bulk rights of up to 47,184m2. This calculation was made by multiplying the erf size of the property by a Floor Area Ratio (FAR) of 12. According to the South African Association of Consulting Professional Planners, bulk floor area is calculated by multiplying the FAR value with the size of the land.

But in the report Slamang says that the shape of the erf made it impossible to determine the potential bulk “without performing an investigation and a traffic impact assessment,” neither of which were conducted prior to the sale of the site.

With 17,500m2 in permissible floor area, Slamang valued Site B at R60-million. This value was increased to R85-million based on an estimate that an additional 30% bulk could be accessed. The report does not indicate how the 30% figure was reached, but according to Tyhalibongo, “developers in certain areas may get 30% additional floor space provided 30% of such space are used for flats”.

In a 10 July press statement Growthpoint stated that “the development on Site B is for a proposed mixed-use building, with retail on the ground floor, offices, collaborative workspace and a hotel.” The planning application does not include flats.

To date Growthpoint believes they are entitled to a permissible floor space of 46,000m2, despite only paying for 17,500m2. (The company’s claims are outlined here.) The City’s investigative report finds that the long and complicated zoning history of the land permitted them to err on the side of caution. Overwhelmingly the report shows a lack of communication between City departments and little attempt to fully calculate the bulk rights of the property before selling it.

Despite Growthpoint arguing that they are entitled to an additional 263% permissible floor space, the Municipal Planning Tribunal on 2 July ruled the zoning of Site B undetermined, resulting in the failure of Growthpoint’s planning application.

Contacted by GroundUp, Growthpoint Properties declined to comment on the findings of the report. DM

The author is a Daily Maverick intern seconded to GroundUp