Mcebisi Jonas: We need a new social compact to fight the comeback by looters and rent-seekers 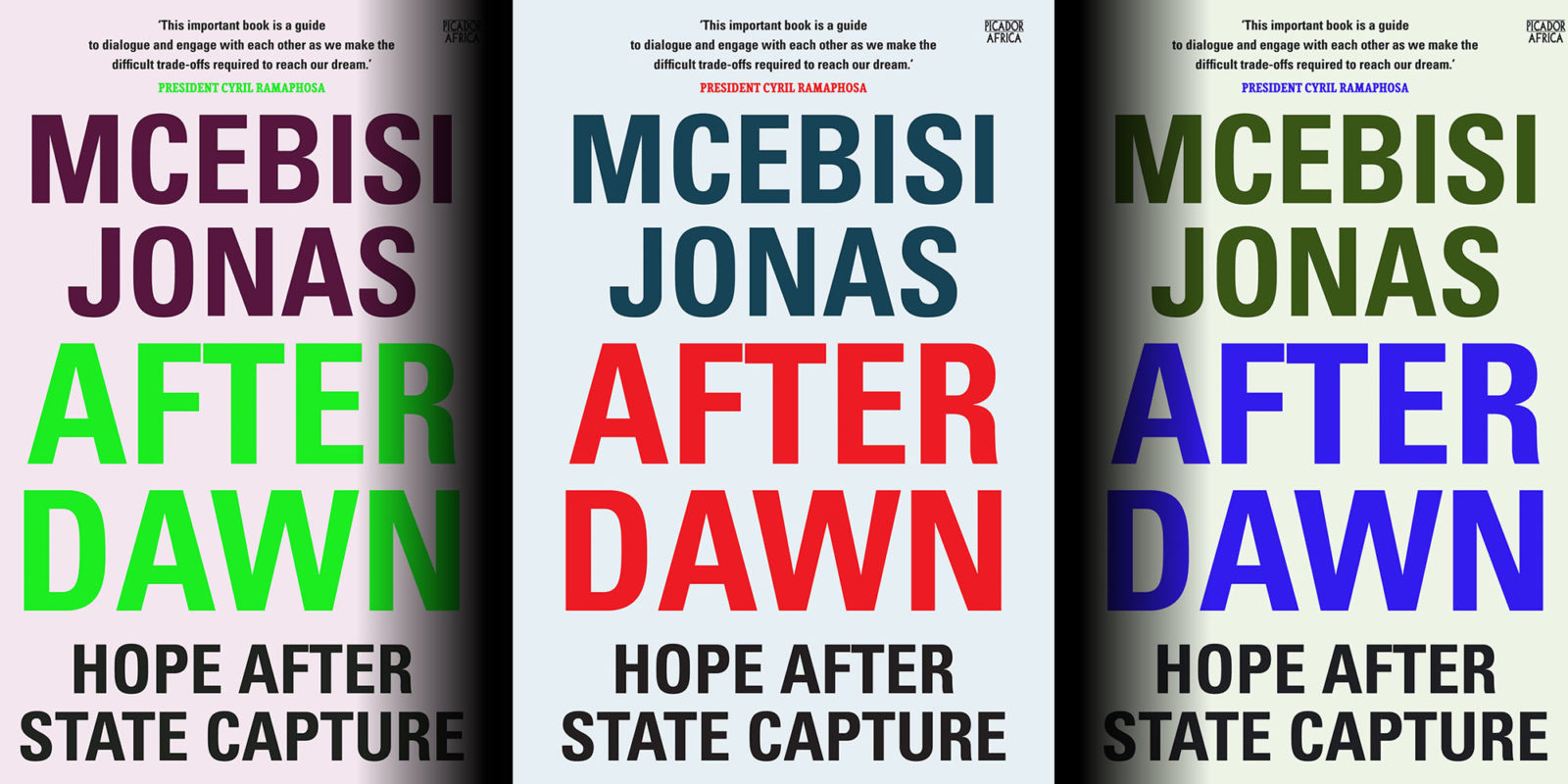 South Africa needs to create new national obsessions around which stakeholders can cohere and push difficult policy decisions that will break our low-growth, high-inequality trap, writes former deputy finance minister Mcebisi Jonas in this extract from his new book, ‘After Dawn’, published by Picador Africa.

The results of the 2019 election clearly show a decline in parties of the political centre and the growth in support for populist ideologues to the left and right. Perhaps more concerning, they show that, for the first time, less than half the adult population voted, with just a quarter supporting the winning party.

This rejection of political institutions and the accompanying rise in extra-parliamentary politics that is seen in service delivery protests are no accident. It is the result of more than two decades of growing unemployment and the exclusion of the youth from economic life. Unemployment has reached an astonishing 27.5%. Youth unemployment is believed to be as high as 50%. The constituencies that benefited from the 1994 arrangement – established business, the new black elite and the trade unions – have begun to go their separate ways as their outlook hardens in the face of economic stagnation.

There are two attitudes to the 1994 deal that are pervasive. The first is nostalgic, viewing the arrangement as the foundation of the “rainbow nation”, emblematic of a time when South Africans broke out of their narrow ideological straitjackets and placed the national interest above all else. The second is outright cynicism, which views the 1994 consensus as a carve-up among elites with the interests of ordinary South Africans placed below those of the powerful.

Both are mistaken. It is far more useful to view the 1994 arrangement as a product of its time. It was, all those years ago, the only way that a peaceful, negotiated political settlement could be made to stick, and, whatever criticisms you might have of contemporary South Africa and its many faults, it has become a far better place to live in than it was back then. Housing has been built on a vast scale and electricity, although flickering on and off due to recent failings, has been extended to far more people, as has access to potable water. South Africa has a social welfare network that effects a vast transfer of resources to the indigent, which places it at the forefront of the developing world.

But what was a necessary step forward in 1994 is now holding us back. It was primarily a political settlement with a Constitution protecting rights and exhorting the government to right the wrongs of the past. But it was silent about the economy, perhaps because the priority was to stop the bloodshed of apartheid’s dying years and introduce democracy. That economic policy lacuna has been filled by a succession of government plans to produce jobs and growth. With the exception of a few good years in the mid-2000s, which eventually collapsed under the weight of rising inflation, corruption in the form of State Capture and a deteriorating global economy, these plans failed to keep pace with the growing numbers of people looking for work.

The evident policy confusion over the past two terms of government was a convenient cover for the accelerated looting of the state by corrupt and powerful people in business and in government. Destructive disruption will be the logical outcome if there is a continuation of the “muddling through” policy approach that has characterised the past decade, and if reformers in the ANC continue to lose the battle against those who consolidated their power under the old State-Capture order. If this situation persists, South Africa will see a continuation of the trends of the past decade: rent-seeking, corruption, declining state capacity and legitimacy, reduced investor confidence and fixed investment, economic stagnation, growing unemployment and inequality, and increased social tensions.

This scenario plays itself out like this: low growth and decreasing per capita income fuel frustration and discontent among the poor and lower-paid workers, with declining support for the government and the ruling party. This creates a growing sense of crisis, with weakened revenue and legitimacy impacting on the state’s ability to lead society out of the crisis. The ruling party turns to short-term populism to regain electoral support, at the direct expense of investment and employment. This further reinforces the vicious cycle of declining legitimacy, reduced investment, rising unemployment and increased social discord.

And as the political elite consolidates power around diminishing resources and rents, the room for buying acquiescence is reduced. The ability to increase the amount and reach of social grants is curtailed. This leads to growing authoritarianism, both to quell growing protest action and to weaken civil society demands for public accountability. This is a scenario we can ill afford. It would signal the end of the liberation project to entrench human rights and people’s dignity.

The need for constructive disruption

What is needed is “constructive disruption”, which ushers in fundamental institutional and economic reform. And the two must go together. As our recent past demonstrates, strong institutions matter and shape the economic prospects of countries. Where economic governance is inclusive, countries are more likely to have shared and sustained prosperity. At the same time, institutions reflect the accumulation logic of different economies. Where wealth is created through rent-seeking, as opposed to innovation and productivity, institutions will always be under threat.

This presents something of a chicken and egg paradox – inclusive institutions are required to restructure an economy towards higher and more shared growth, but elite interests controlling rents actively prevent the necessary innovation and institutional change. The question is how to break this pattern.

South Africa finds itself in a middle-income trap, unable to compete in the low-skill, labour-intensive industries where low-income countries enjoy competitiveness, and without the spread of technological know-how and human capabilities to compete with high-income countries in more sophisticated industries and services. The result has been increasing deindustrialisation and a growth slowdown. Poor education, skills and a dearth of innovation outcomes have meant that the country has been unable to transition to higher-value activities.

Less opportunity for wealth creation in the real economy has increased the stakes in the parallel, clientelist economy. This, in turn, has weakened the state and those very institutions central to inclusive growth. This suggests that the break – the constructive disruption – must be sharp, deliberate and aimed simultaneously at impacting on the economy and state institutions. Minor and incremental policy changes at the margins will not be sufficient to change our development path. Instead, we require immediate and significant interventions at scale to create dynamism and confidence in the economy and institutions.

The need for new national obsessions

We need to build the momentum for a newly invigorated state and a growing and inclusive economy. Achieving this is not just about having “the right person at the top”, although obviously this is an important success factor. It is rather about embedding a change agenda in a diverse range of interest groups – political formations, the state, trade unions, civil society and business. We need to create new national obsessions around which stakeholders can cohere and push difficult policy decisions that will break our low-growth, high-inequality trap.

This societal mobilisation is vital to combat the fightback by those hell-bent on destroying institutions that limit looting and rent-seeking. The new consensus must be built on the logic that we need both growth and transformation. Economic growth without transformation will reproduce and exacerbate inequalities, which will make growth unsustainable; transformation without growth will lead to less investment, jobs and wealth to redistribute, which will trigger elite conflict, making any consensus impossible to manage. There are three national obsessions around which we need to build consensus and mobilise.

An obsession with inclusive growth

The first is inclusive growth. In the immediate term this means putting jobs at the centre of economic policy while we restructure towards higher productivity and higher value-added activities. This will require new policy measures, including subsidies and incentives to encourage labour-intensive production. Our obsession with inclusive growth should also tackle constraints on competitiveness and investment. These should be identified and resolved in collaboration with the private sector at the industry level. In the immediate term, red tape can be cut to reduce bureaucratic burdens, taxation and onerous compliance processes, especially for small business.

In the more medium term, we need to drastically cut costs of business, including port charges, costs of broadband and energy, and costs associated with cross-border trade. We must also nurture a new obsession with research and development and technology development and application, working with our tertiary education sector. The necessary fiscal instruments for this must be developed with urgency. The finance sector (including pension funds) needs to be intensely engaged to redirect new resources for productive capital expansion, including venture capital for technology development and start-ups.

Growth will generate much-needed revenue for the fiscus, which will allow us to expand transfers to the poor. This will begin to reverse levels of inequality, but will only be sustained if complemented by real shifts in wealth and asset ownership. This will require new sets of trade-offs, which need to be negotiated with the private sector and banking sector. These trade-offs must be at the heart of the industry-level compacts that will be negotiated as part of the consensus for inclusive growth. DM

Mcebisi Jonas is the former deputy minister of finance of South Africa. This is an extract from his book, After Dawn, just published by Picador Africa.