Joburg vendors vs police: When a system wears the badge of the law but lacks moral authority 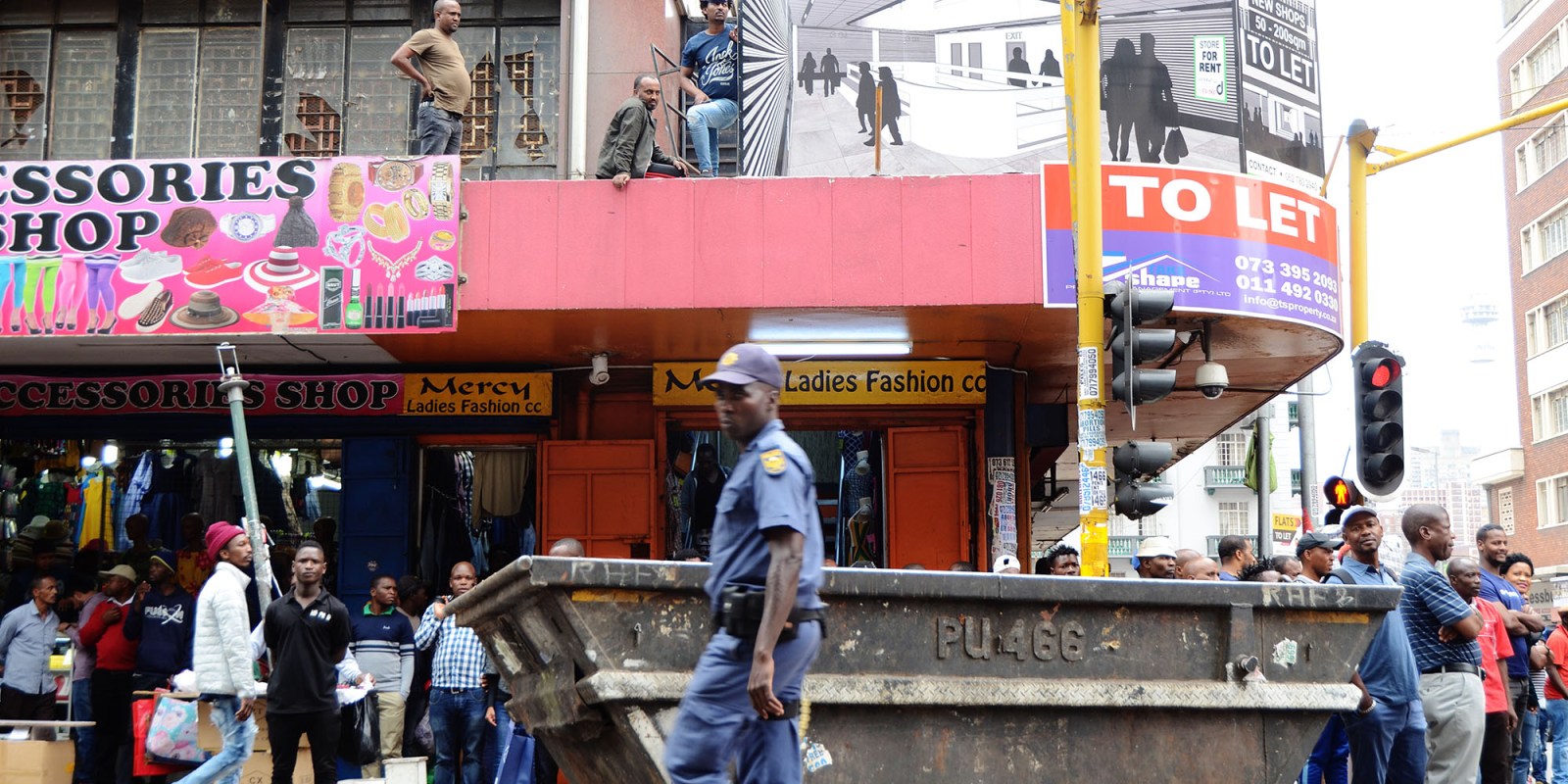 The confrontation between police and traders on the streets of Johannesburg last week reveals the best, and worst, of policing in South Africa.

Last week’s incident in Jeppe Street in the Johannesburg CBD, in which a large group of traders attacked a SAPS and Metro Police contingent, has created consternation for two reasons.

On the one hand, many people were disturbed by the level of lawlessness and apparent open contempt for authority, evoked by images of a large crowd surging towards police vehicles, throwing bricks, and other projectiles (the police claim that these included petrol bombs, though these are not visible on any of the online videos).

There is also concern about the fact, shown very clearly in some footage, that police vehicles were retreating in the face of the advancing crowd. For some this was evidence of intensifying chaos, of police losing control, and of impending anarchy. As eNCA presenter Vuyo Mvoko expressed it, this seemed to imply that the police are “inappropriately restrained” and members of the public are increasingly free to do as they please.

Despite the public anxieties it has evoked, the police withdrawal in the face of the attack is something for which they should be commended. This was a complex policing situation that started off as a law enforcement operation but escalated into a highly charged public order incident of collective resistance to the police.

The immediate precipitating cause for the confrontation was a police raid targeting counterfeit goods. They were not protecting anyone against an attack or arresting dangerous criminals who pose a danger to members of the public. The presence of the police was the reason for the violence by the crowd.

If no one else is in danger, and the principal target of aggression is the police, then it is appropriate for them to retreat. As SAPS Gauteng Provincial Commissioner Elias Mawela commented, the principal job of the police is the protection of life and not to enforce laws against counterfeit goods “at all costs”.

“We value human life, we don’t want many people dying at the hands of the police,” he said.

The internationally accepted principles governing the use of force by police are necessity, proportionality and reasonableness. In terms of these principles, it would be unacceptable for police to allow the situation to escalate into one in which they might have to use lethal force merely for the confiscation of illegally sold T-shirts.

Some of the facts are in dispute. Traders claimed police used live ammunition and showed cartridge shells they claimed were used by the police. But there is no evidence that anyone was injured by gunfire, indicating that, if live ammunition was used, this was not targeted directly at the crowd.

The strategy of retreat and using time to their advantage was an appropriate police response. Police are supposed to be courageous, but a police commander who is indifferent to the safety of police personnel is a very bad commander. If the police had not retreated there would have been a very high risk of some of them being seriously injured. If they had not retreated it is likely they would have had to resort to the use of force, including potentially lethal force, to defend themselves.

Reacting to the attack by escalating the level of force would have risked tragedy. Opening fire with live ammunition in a busy public place has a high risk of injuries to people who have nothing to do with the confrontation with the police.

There were therefore commendable aspects to the conduct of the police last week. But these positive aspects need to be viewed against a more troubling backdrop.

The police operation which led to the confrontation was not a once-off. Large contingents of SAPS and metro police members routinely carry out these operations and have been doing so for several years. Raids are carried out in co-operation with lawyers representing major international manufacturers of well-known clothing brands. The co-operation extends to participation by civilian “enforcers” who work on behalf of the law firm involved and accompany police during these operations.

The site of these operations is an inner-city retail hub known for selling wholesale quantities of cheap clothing, shoes, household wares and accessories. Billions of rands’ worth of fast fashion are sold in the CBD. Customers include informal traders from towns across South Africa and Mozambique, Zimbabwe, Malawi, Lesotho, Swaziland and Zambia. The centre of this trade is the city blocks in the north-eastern segment of the CBD. Defunct medical towers and office blocks have been converted to shopping centres hosting thousands of cupboard-sized shops.

A study funded by Johannesburg Inner City Partnership (JICP) in 2017 counted 3,000 shops in the area. It found cross-border shoppers spend more than R10-billion each year in this part of the city. That amounts to double the annual turnover of Sandton City, widely regarded as Africa’s largest shopping mall.

Each shop employs, on average, three people. On average, one of those employees is South African.

This is a significant economy. It is a port that serves the subcontinent. But the shops and the services they support are not recognised as the backbone of the regional retail port that they comprise. Instead, the area is mostly thought of within the City discourse of decline and decay.

It is here that police attention is focused, not only in the raid on shops and running battle reported on 1 August. Regular raids targeting counterfeit goods traded among the stocks of fast fashion are conducted in these buildings.

Officially, counterfeit goods are seized under the direction of law enforcement agencies, instructed by the courts that have been approached by attorneys in patent law. Such raids require that officers present search and seizure orders. They require inventories of confiscated goods to be recorded and copies thereof to be left with shopkeepers. Stock is taken to police stores from where its traders are supposed to be able to recover it if they can prove its legitimacy.

In interviews conducted for the JICP study, traders reported that many raids are not procedural. Moreover, they are accompanied by the disproportionate use of force. The scale of these operations – sometimes conducted more than twice a month in the area – is considerable. It is not unusual for streets to be closed for several hours while up to 20 police vehicles cordon off the area. Roller shutter doors are forced open, and goods are removed from shops. Traders say no inventory is given to them and goods, whether counterfeit or not, are removed.

The raids are led by plain-clothed enforcers attached to patent attorney companies. In this part of the city the same enforcers – a father and sons team – have led raids for years. Their involvement in these operations was illustrated by blurry CCTV footage circulated last week along with the footage of traders pelting police vehicles. Taken from within a building that was being raided, this showed police officers and hefty white men in plainclothes carrying semi-automatic weapons and removing goods from stores.

These men are alleged to not only remove goods but to have also broken open tills and violently attacked shopkeepers in the area. In support of them, metro police and several SAPS units employ tear gas, rubber bullets and stun grenades. Many traders report that confiscated goods “reappear” in other shops. This suggests law enforcement officers are involved in the resale of confiscated items back into the area.

These routine raids are not the only police attention traders receive. As with other foreign-dominated shopping districts in South Africa, this area receives a lot of more irregular police attention. Many traders in the area receive frequent visits from on-duty SAPS and metro police officers focused on extracting money from them. As a result of the large numbers of police involved, and the frequency of these visits, the amounts extracted by the police are punitively high.

In his eNCA interview, the fact of serious police corruption was openly acknowledged by Mawela himself, who said: “The issue of corrupt officials is something I cannot deny, we have arrested a lot of our own.”

Police are not the only ones taking advantage of the large amounts of cash flowing through this area. It inevitably attracts attention from criminals. A survey conducted within the JICP study found 38% of retailers had regularly “gifted” police officers and 60% of retailers had been physically attacked or assaulted in the inner city. Shoppers also face extreme risk. A third of shoppers interviewed had been exposed to violent crime in Johannesburg. Shoppers indicate they spend as little time in the city centre as possible, for fear of their lives. Despite the fact that cross-border shoppers spend more than R10-billion in Johannesburg’s inner-city each year, issues around their safety are generally met with indifference.

Police work in the Johannesburg inner city pays little attention to the safety of shoppers and the security of shop-owners. Apart from routine raids carried out on behalf of multinational corporate interests, the primary reason for the presence of police in these inner-city areas is self-enrichment. Moreover, the legitimate mission of tackling counterfeiting is not being accomplished. The years of repeated raids seem to show no arrests of anyone accused of selling counterfeit goods in the area.

The attack by traders on law enforcement officers merits concern, but cannot be interpreted as an expression of disdain for legitimate authority. Instead, it is an expression of outrage against a policing system that only oppresses and extorts but does not protect – a policing system that wears the badge of the law but does not uphold its moral authority. DM