Fear of flying? Plant a spekboom to offset your carbon footprint 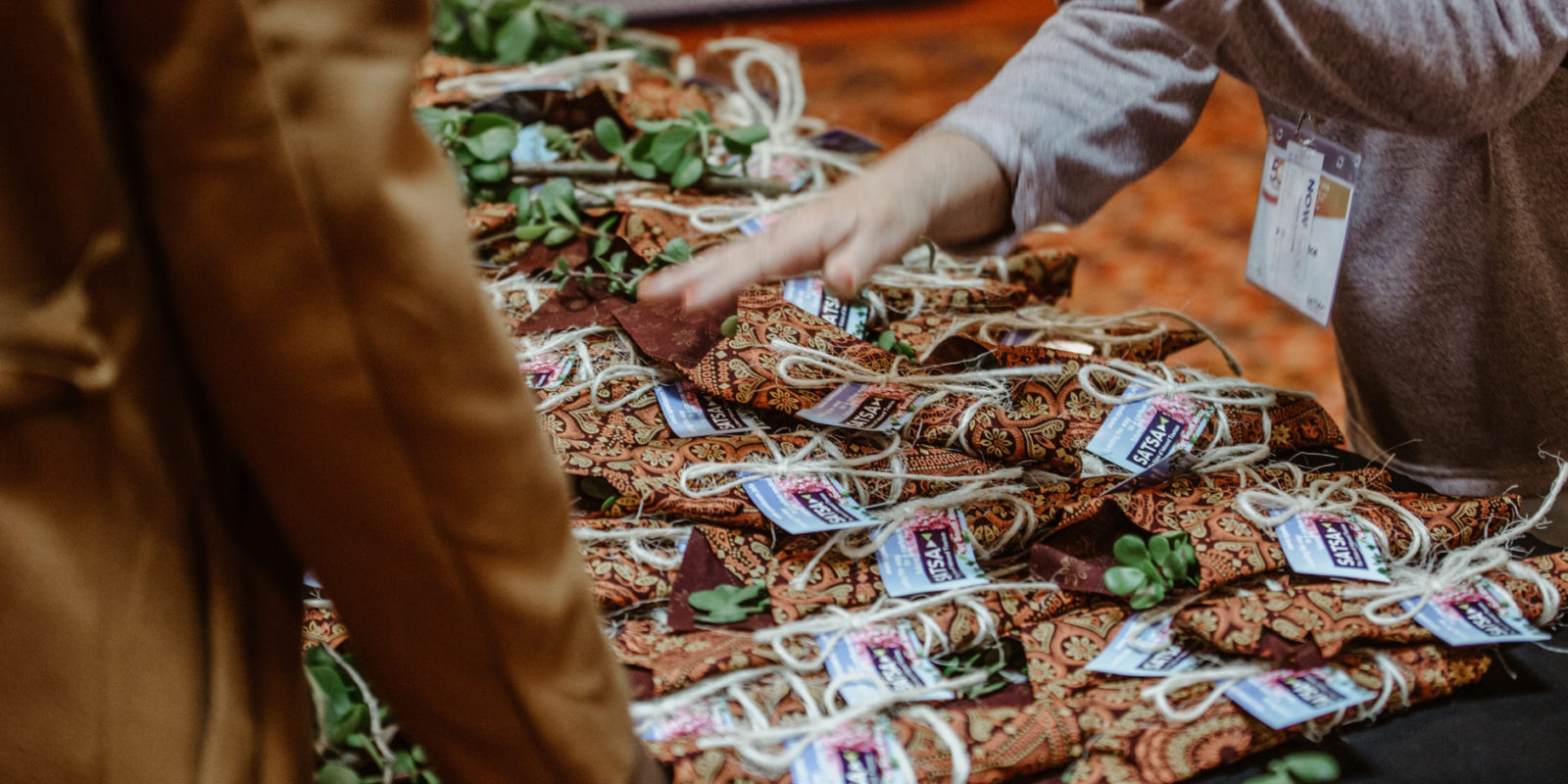 Some of the 600 spekboom handed to delegates at the SATSA conference to get the carbon offset programme rolling. (Photo: SATSA)

As the global pushback against flying gains momentum because of air travel’s impact on the climate crisis, the South African travel industry has come up with an innovative offset mechanism — planting carbon-sucking spekboom to combat ‘flygskam’.

Flygskam — the word coined in Sweden to describe the shame of flying because of the high amount of climate-changing carbon that air travel generates — is gaining traction in Europe with increasing numbers turning to rail instead.

While the flygskam movement can help cut carbon emissions, if the trend grows substantially it could have a negative impact on tourism in countries that Europeans cannot reach by hopping on a train — such as South Africa.

The South African tourism industry is alert to that and has come up with a scheme it hopes will ensure European tourists don’t ditch plans to fly here on holiday because of the embarrassment of clocking up carbon emissions.

The idea takes the form of a carbon-offsetting project launched a few weeks ago at the Southern African Tourism Services Association’s (SATSA) annual conference in the Eastern Cape.

SATSA hopes that the project will grow to such a level that tourist flights to and from South Africa will eventually become carbon-neutral.

There is nothing hi-tech about it, nor anything involving complex finance or carbon markets. It simply entails planting succulents. Not just any succulents, but the humble spekboom — many millions of them — as a carbon-offsetting mechanism.

Chief operating officer of SATSA Hannelie du Toit acknowledges that it is a tough goal to reach, but believes the industry needed to take the first step.

Du Toit believes South Africa is the first country to put a mechanism in place to counter flygskam specifically.

“The trend around flight shame started in Sweden and it appears to be getting louder and louder. We want to be prepared because if it gets loud enough it could have an impact on tourism here, and tourism is one of South Africa’s economic pillars.”

Flygskam — literally translated it means “flying shame” — began in mid-2017 when Swedish singer Staffan Lindberg wrote an article on the subject and persuaded some friends to sign the article as a commitment to stop flying. They included Olympic medallist Björn Ferry and opera singer Malena Ernman, mother of teenage climate activist Greta Thunberg.

The anti-flying movement has spread from Sweden to other European countries and has made enough impact for the International Air Transport Association (IATA) to sit up and take note. It was reported that flygskam was a major topic at the IATA conference in Seoul in June, where IATA head Alexandre de Juniac said that if left “unchallenged”, the sentiment would spread.

Global tourism as a whole accounts for about 8% of carbon emissions.

The UK-based online publication Carbon Brief, which specialises in covering developments in climate science and policy, says if aviation were a country, it would be the sixth-largest carbon emitter in the world, sitting between Japan and Germany.

The aviation industry is in a bit of a tight spot. It has said it has plans to reduce its carbon footprint, but there does not appear to be any quick way to do so. One of the most effective ways would be to use a sustainable fuel that could cut emissions by 80% on each flight. However, there is a short supply of this fuel and it is expensive.

The UN’s aviation agency has a scheme agreed to by 192 countries in 2016 that aims to offset carbon emissions from international flights. It is known as Corsia: Carbon Offsetting and Reduction Scheme for International Aviation.

All airlines that take part will have to buy offsets, or “pollution credits”, for any growth in emissions above 2020 levels.

It is a long process that will happen in a series of steps, the first of which began in January when airlines taking part began to monitor and report on their emissions.

Corsia has met with a fair amount of criticism, not least because offsetting means that airlines will not have to cut their carbon emissions, but instead will pay other parties to reduce theirs. As the effects of climate change bite deeper, this may no longer be politically acceptable.

Another problem lies in enforcing and monitoring the offset projects that airlines buy into. Some critics say experience has shown that there are some dodgy offset schemes that have a slim chance of ever delivering reductions in emissions.

The SATSA spekboom project is in its infancy and SATSA will have to develop ways of monitoring the project if it takes off.

Like many projects, the spekboom offsetting project was the idea of just one individual: Aidan Lawrence, SATSA Eastern Cape deputy chair.

Lawrence launched the project at the SATSA conference in June 2019 where he handed out 600 spekboom cuttings to delegates.

“The enthusiasm was amazing. The table was empty.”

Lawrence has been planting spekboom for years at his backpackers on the Wild Coast where he also runs a small nursery, but it was not until he heard about flygskam at a tourism workshop in Cape Town in 2018 that he came up with the idea of spekboom as a carbon-offsetting project.

“A lady came up to me and asked if I had ever heard of ‘flight shame’ and I had not. She told me about it and that triggered the idea about spekboom to offset carbon from flights. I decided to approach SATSA and they immediately took to the idea.”

Lawrence says one hectare of spekboom can absorb more than four tons of carbon dioxide a year — “making it more effective than the Amazon rainforest at removing carbon dioxide from the atmosphere”.

SATSA will plant another 5,000 over the next few months and there will be enough “mother plant stock” to roll out millions of new plants.

Lawrence says it takes six people about 25 minutes to plant 300 spekboom in pots, filling them with soil, and less time to plant them directly in the ground. Each plant lives for 200 years.

Lawrence believes any tourism outfit in South Africa, no matter how big or small, should take responsibility for the spekboom carbon offset project. What he fears is that industry players will “dump” the project on him.

“That tends to happen, that the person who started the project ends up having it all dumped on them. It won’t work like that. Every tourist outfit must get involved. Spekboom can grow anywhere, even in snow, so there is no reason why tourism outlets all over the country can’t start planting.”

SATSA’s head David Frost echoes this: “Globally, the tourism industry accounts for 8% of the world’s greenhouse gas emissions. Each business must take responsibility for its carbon footprint.”

What makes spekboom (Portulacaria afra) better than most other plants at sucking up carbon?

According to the SA National Biodiversity Institute (Sanbi), it is because the spekboom has two photosynthetic pathways: one that most plants use, plus a second pathway that it uses when conditions are unfavourable. If there is not enough rain, for instance, other plants shut down and wait for conditions to improve, but the spekboom just switches pathways and carries on photosynthesising and “slurping up huge amounts of carbon despite adverse climatic conditions”.

Sanbi says a stand of spekboom can remove more carbon from the atmosphere than an equal amount of deciduous forest.

The Intergovernmental Panel on Climate Change (IPCC) issued a report in 2018 that said the worst effects of climate change could be avoided if we kept the global average temperature increase to 1.5°C.

Achieving this would entail radical changes in the way we do things in order to get carbon out of the atmosphere, both by cutting emissions and by removing what is already there as a result of historic emissions.

Planting trees and restoring damaged forests is one way to go, so the spekboom project fits right in there.

Globally, forests store almost a third of the world’s emissions. Experts say restoring forests destroyed in the Amazon would pull about 1.5 billion tons of carbon out of the air.

But planting trees alone won’t the world below the 1.5°C limit. The IPCC report says we need to tackle emissions on several fronts.

Kate Gordon, a fellow at the Columbia Centre on Global Energy Policy, is quoted in a Columbia University publication saying exactly that.

“If there’s one thing the IPCC report underscores it is that we need a portfolio. We need to reduce emissions dramatically, we need to come up with more renewable energy options to replace fossil fuels, we need to electrify a lot of things that are currently run on petroleum and then we need to do an enormous amount of carbon removal.”

The South African spekboom project has a long way to go before it will be big enough to suck up the equivalent amount of carbon from air flights to this country.

And there is a lot of work ahead in gathering data, for instance calculating the amount of carbon flights to South Africa emit, which Lawrence has begun working on.

“It is going to be lot of work and I would welcome help on any side. But you have to start somewhere, and that’s what we’re doing.” DM