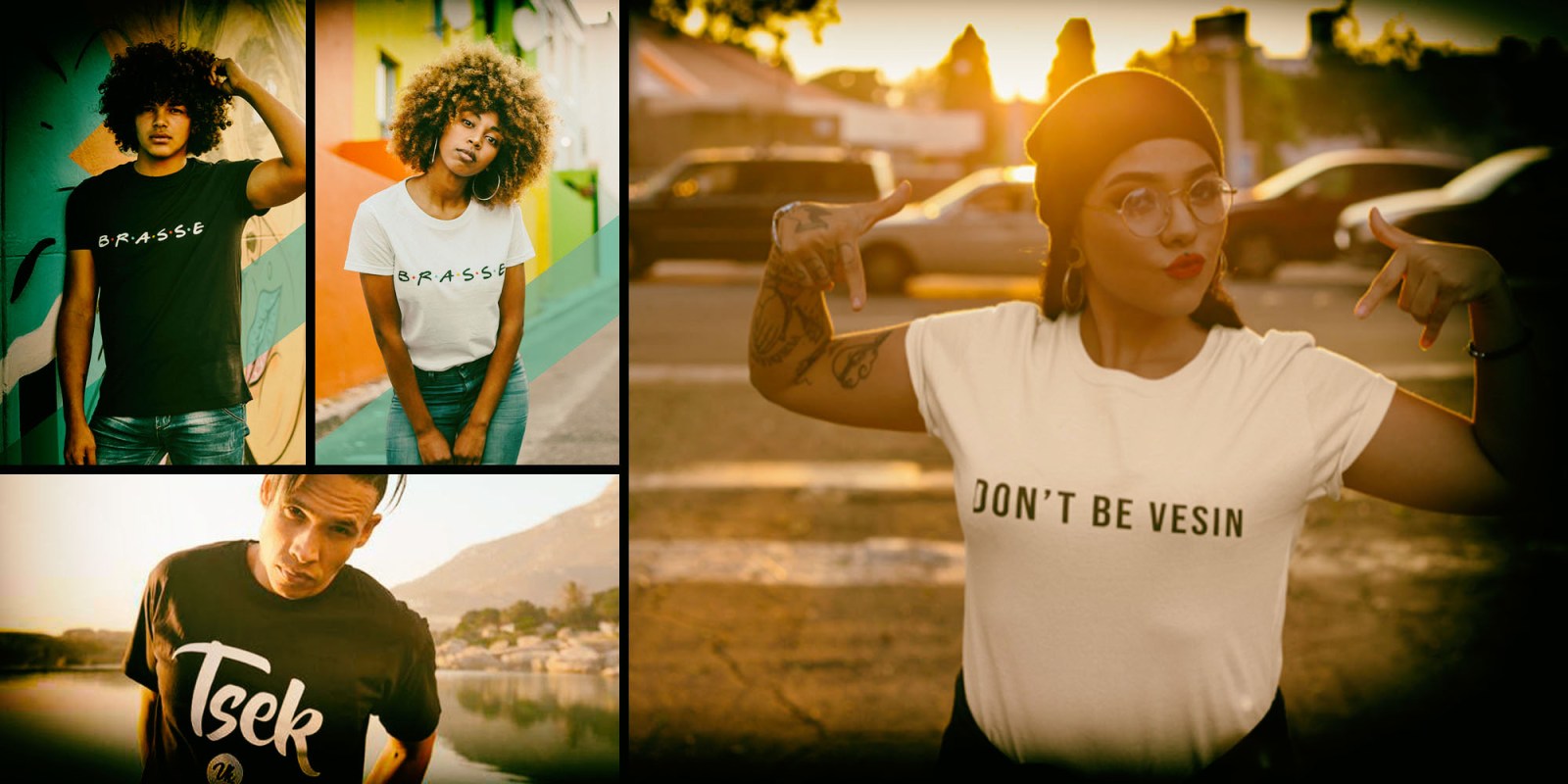 At the Vannie Kaap pop up store in Canal Walk, customers try on T-shirts and giggle at mugs with slang terms like “awe”, “tsek” and “just be lekker”. One customer says he drove all the way from Hermanus, two hours away to visit the store, while a mother and daughter travelled from Mitchells Plain to buy a Vannie Kaap fanny pack that reads “masekind”.

Co-owner of Vannie Kaap, Marc Jacobs (who shares his name with that American fashion designer and former creative director of Louis Vuitton) says the brand was never a political statement, but more about authenticity and making people “comfortable” with who they are. “Vannie Kaap is for the whole community on the Cape Flats, it’s something you can resonate with, something you can look at and think that’s actually me, you know? I can identify with that. We used to talk about this in District Six back in the day. My ma het altyd so gesê, or my pa praat nog so, you know?”

Jacobs is from Athlone and the founder of Vannie Kaap is from Manenberg, a suburb on the Cape Flats which is in the news on a regular basis for gangsterism, drugs and violent crime.

On Thursday, the South African National Defence Force (SANDF) was deployed to Manenberg, with members of the army seen entering the suburb in a bid to quell gangsterism and violence. With all the negative stereotypes on the Cape Flats, Jacobs says Vannie Kaap wants to create something that all Capetonians can be proud of, especially people who live on the Cape Flats.

“Vannie Kaap is that one thing that was missing from us as a culture because we’re always told we don’t have anything that is ‘coloured’ or ‘brown’. So what we’re doing is just creating that universal inclusivity to let them know who we are as a people. We are here. See us. Recognise us,” says Jacobs.

Vannie Kaap started in 2015 when the founder started posting memes on Instagram, the popularity of the brand grew from there, and in 2017, they opened a store in Salt River, selling T-shirts, caps and hoodies. Last weekend, they opened their doors in Canal Walk, and in the next few weeks, they’ll be opening a store at the V&A Waterfront, tapping into the tourism market.

Jacobs says the majority of their customers are local, but the South African expat community has also really bought into the brand. “There’s a sense of nostalgia,” says Jacobs, having lived in the UK for a few years, he understands what a “piece of Cape Town” can feel like in an unfamiliar city.

“I was overseas in 2003 in the UK, and the most frustrating thing was they didn’t know about us as a culture. How is it that the world doesn’t know about the so-called coloured person? It’s difficult to understand. So the seed was planted,” he says. “Now you have expats, you have people who come to SA and go back home, they take a piece of Vannie Kaap with them. It’s that piece of Cape Town that you take with you wherever you go around the world.”

The founder and owner of Vannie Kaap is anonymous. He is involved in the day-to-day running of the business through Whatsapp and email, but not even his employees know who he is. “He lives in the cloud,” jokes business administrator Melany Siljeur.

Jacobs says the founder prefers to remain “behind the scenes” because he does not want the brand to be reduced to an individual, but he still posts memes on Instagram on a daily basis, ensuring that the flame that started the business keeps going.

“Consistency is the key. The consistency of our memes on social media is what’s allowed the audience to be drawn into the brand. So when they see it in front of them, it’s just natural to go into the store and purchase something because they follow us on Facebook or they saw it on Instagram, they laughed, they shared it. Now when they actually see it in a store, it becomes, I have to get me one of this,” says Jacobs.

Vannie Kaap is about “we” rather than “I”, he adds, and even though they are not seen as “corporate-friendly” because of the language used on their merchandise, it’s the authenticity of the brand that’s important.

“What I’ve realised is if I must act a certain way, then am I being true to who I am? I do swear and I do gaan aan mal, but must it detract from who I am as an individual? Do I add less value to you because I am all these other things as well? I respond to emails with awe ma se kind, what time can I stikuit there? This is me being authentic. I’m not trying to be funny, I’m not trying to be aspris. There’s a whole world that needs to open up. There’s more to the brand than just what’s on a T-shirt or mug,” says Jacobs. ML