DA, the contortionist: Push for Mkhwebane’s removal — while backing her report against Ramaphosa 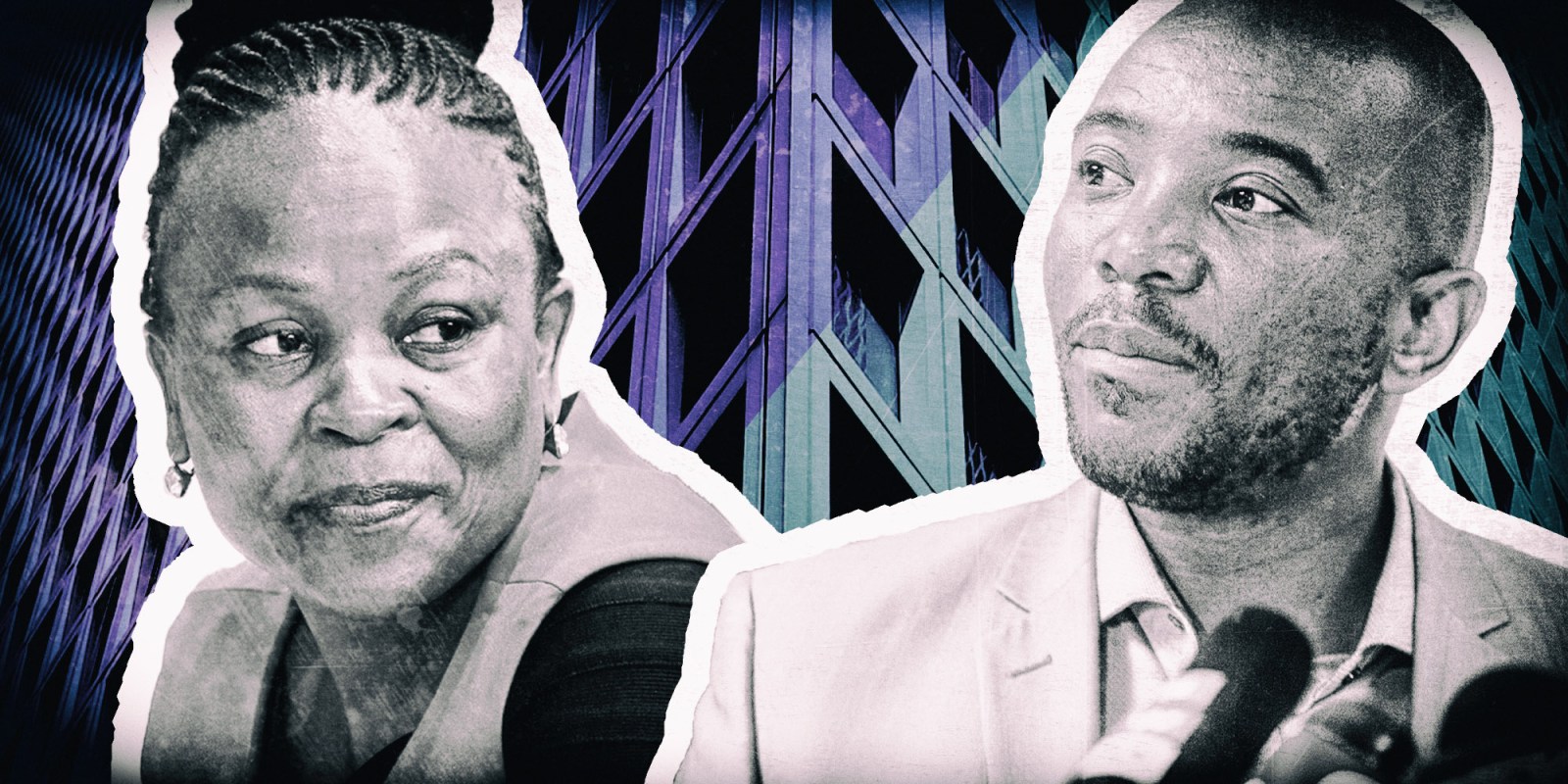 As an opposition party, the DA cannot be faulted for making political hay by trying to hold President Cyril Ramaphosa to account. But the party must know, be careful what you wish for.

Public Protector Busisiwe Mkhwebane has handed on a silver platter the makings of a sustained campaign by the opposition against President Cyril Ramaphosa. The DA, which wants her removed from office, is conflicted — even if the party protests otherwise.

No date has yet been set, but the DA’s request — the second in two years — to have Public Protector Busisiwe Mkhwebane removed from an office the party says she’s unfit to hold, is before Parliament’s justice committee.

Before the May 2019 elections the then justice committee, through a majority of ANC and EFF MPs, decided it was “premature” to act on DA Chief Whip John Steenhuisen’s initial September 2017 request. Still outstanding was the Constitutional Court ruling on Mkhwebane’s appeal against the personal cost order imposed when the North Gauteng High Court set aside as unlawful and invalid Mkhwebane’s June 2017 report into the ABSA-Bankorp apartheid-era bailout. The Constitutional Court obliged on Monday 22 July, delivering a crucial loss to Mkhwebane, and an important milestone in the fight against State Capture.

After the elections, the DA requested on 22 May that National Assembly Speaker Thandi Modise set up another inquiry into Mkhwebane’s fitness for office on the back of the set-aside reports on ABSA-Bankorp and the Vrede dairy farm.

On Friday 19 July DA leader Mmusi Maimane expressed his satisfaction with Mkhwebane’s determination that President Cyril Ramaphosa misled the House over a R500,000 donation from Bosasa and acted inconsistently with his office by failing to disclose all CR17 donations to his campaign for ANC president as these were deemed as sponsorship.

“The law is the law,” Maimane proclaimed at Friday’s media briefing, emphasising the Office of the Public Protector must be respected.

But, of course, the ABSA-Bankorp report and the report on the Gupta-linked Vrede dairy farm were also produced by South Africans working in the Public Protector’s office. If the argument then is that those reports were set aside as invalid and unlawful, the current DA support of Mkhwebane’s report against Ramaphosa would have to change if the president were to successfully pursue a court review to set it aside.

That’s the consequence of political expediency. In the world of politics, that bridge will be crossed if, and when necessary. But right now, Mkhwebane’s findings against Ramaphosa fit the DA political playbook.

In calling for an ad hoc committee to process this Public Protector report, Maimane had already on Friday talked of summonsing the president to give account, and be held accountable. Even though it will be up to National Assembly Speaker Thandi Modise to approve, and for the House to enact such a committee, the DA’s political pen would ensure the CR17 donations would be kept in the public domain. It’s back on script.

Coincidentally, Maimane was found guilty of having failed to disclose donations he himself had received in the contest for the DA leader’s position he clinched at the May 2015 party congress. Initially, the DA publicly said it was an oversight — and then Maimane told Parliament’s joint ethics committee its processes were flawed and had to start again. The committee disagreed and on 16 March 2016 fined Maimane seven days’ salary and ordered a reprimand in the House. Then DA MP Magashule Gana received the same penalty, also for failure to disclose campaign donations.

But Mkhwebane has given the DA has a leg-up. Its political script had gone wobbly when former president Jacob Zuma stepped down in February 2018. The new dawn Ramaphoria ended the easy pickings of Zuma’s meandos and scandal ridden-administration.

“The Public Protector’s report finally shatters the myth of a ‘good ANC’ and a ‘bad ANC’. There is only one ANC — corrupt to the core and taking South Africa backwards,” said Maimane in a statement on Friday.

That’s right on cue with the DA’s May 2019 election messaging: just because the driver has changed — from Zuma to Ramaphosa — didn’t mean the ANC bus, or train, was any better. And only the DA would deliver.

“Accountability must be pursued regardless of who is in office. The rule of law is sacrosanct, and if the president believes he is innocent he must exercise his right to take the report on review…” said Maimane’s media statement that echoed his answers at Friday’s media briefing shortly after Mkhwebane released her report.

And that’s the line the DA is intent on holding, even as the opposition party will have to continue its Twister moves to straddle the push for Mkhwebane’s removal from office because she’s unfit to hold it and the support for her report against Ramaphosa. The question of would anyone else but Mkhwebane have delivered as she did, must be silenced, or at least subdued.

The DA tone was set as early as 5 July.

“Our commitment to upholding the rule of law always supersedes personal and political disagreements. The Public Protector has now made a finding and the law must take its course,” said DA MP Natasha Mazzone on Mkhwebane’s remedial action against Public Enterprises Minister Pravin Gordhan, who has subsequently taken the Public Protector on review.

Getting everyone on the same page — at least in public — is one of the DA’s strengths, alongside its PR machinery. But it’s understood not everyone agrees with this turn on the Public Protector. It’s unclear whether concerns are being raised within structures. The DA is in the middle of an organisational review following its first drop in voting support in two decades in May’s poll.

But issues arise in Mkhwebane’s report — even as it rewrites to the DA’s liking the political narrative to pull Ramaphosa into the terrain of dodginess over political money in the super-charged governing party factional politicking.

Questions arise over the seemingly extensive efforts to trace the money trail of private CR17 donations while the Public Protector’s mandate in law and constitutionally is public money, public functions and public office.

As Ramaphosa is not an MP — he immediately resigns from the National Assembly following the election, according to Section 87 of the Constitution — his misleading the House and failure to disclose can’t simply be referred to Parliament’s joint ethics committee. And some perspective: the parliamentary ethics code has a maximum penalty of a fine of one month’s salary and/or a reprimand in the House.

Ordering the retrospective disclosure of CR17 donations is also sticky, not least of which because retrospectiveness is unusual. Questions also emerge where it needed to be disclosed: the readily accessible parliamentary register as he had been deputy president at the time, the less accessible executive register at the Union Buildings, or maybe somewhere completely different.

And Mkhwebane’s sharp commentary on how Parliament runs its question time is unusual. If the national legislature were to heed her comments, more time should be taken to prepare responses before answering questions in the House, it would have a chilling effect. Ironically, the DA vocally and persistently complained that ministers, and Zuma, were not properly answering questions in the House.

The DA as an opposition party in a country where a social compact, while much talked about, is nowhere on the horizon, has no obligation to take up the cudgel for anyone but itself.

That’s politics. And politics is not the law, even if law can become an instrument of politics. But it’s also a fine line to political naivety illustrated by Maimane, quite adamantly on Friday:

As an opposition party, the DA cannot be faulted for making political hay — that’s the short-term gain-ism of South African politics.

Mkhwebane’s report on Ramaphosa was designed to keep the president on the back foot. Issued at short notice, it came a day after the president told the House South Africa’s constitutional democracy meant no one was above the law or scrutiny.

It’s part of the contest of political narrative that plays out daily in South Africa’s body politics. But the DA must know, be careful what you wish for! DM