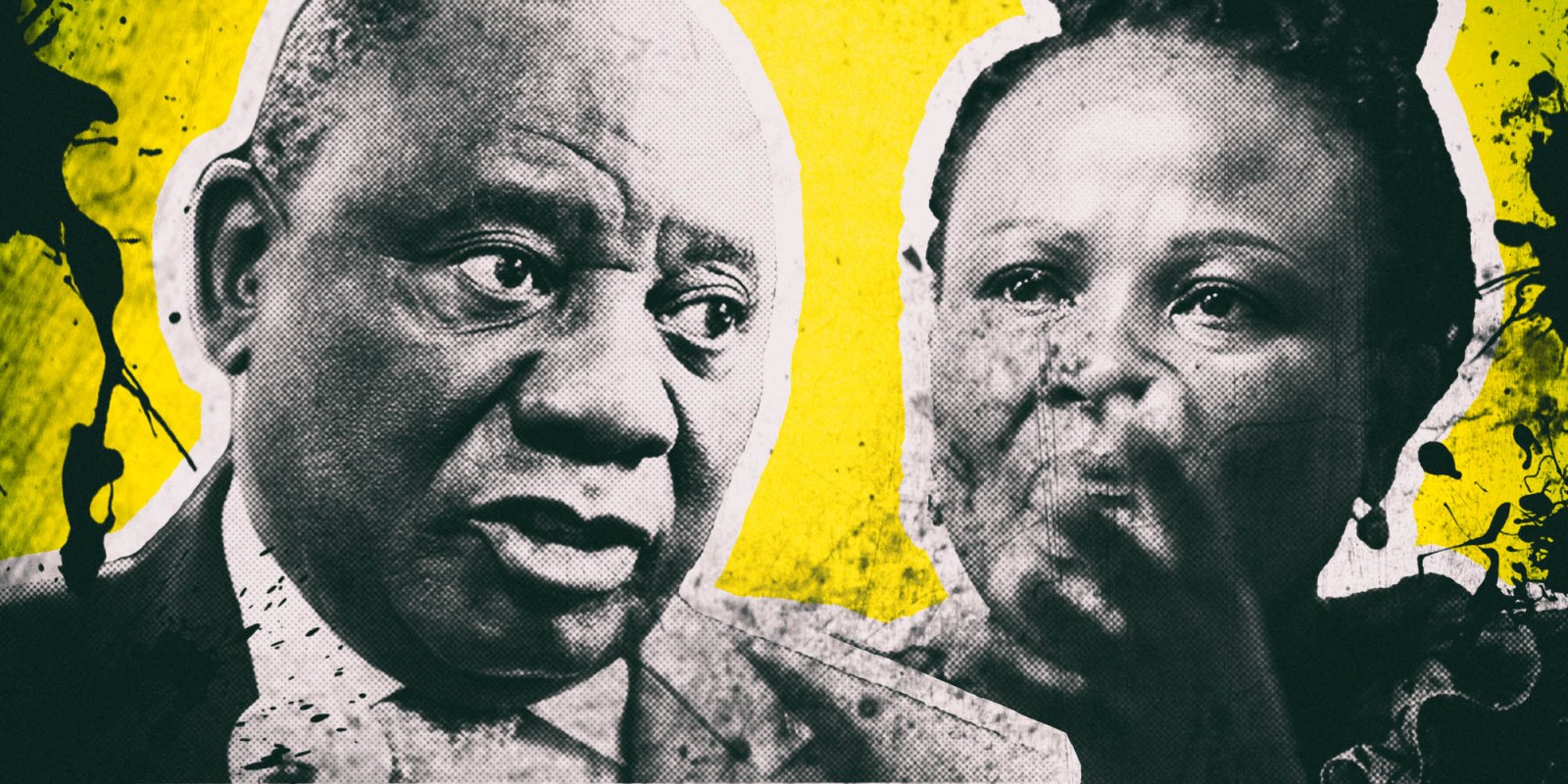 President Cyril Ramaphosa took a stand on Sunday by facing the media and announcing he would take Public Protector Busisiwe Mkhwebane’s findings against him on urgent judicial review. Ramaphosa emphasised his respect for Mkhwebane’s office — but called her report ‘fundamentally and irretrievably flawed’.

President Cyril Ramaphosa will launch an urgent judicial review of Public Protector Busisiwe Mkhwebane’s report on his campaign finances during his race for the ANC presidency in 2017, he announced in a press briefing at the Union Buildings on Sunday evening.

Ramaphosa emphasised his support for the rule of law and Chapter 9 institutions and would not comment on whether Mkhwebane was malicious or incompetent after she released a report on Friday, which found he had misled Parliament and violated the Executive Ethics Code regarding a R500,000 donation Bosasa boss Gavin Watson made to his CR17 campaign.

The president said he and his lawyers agreed the report was “fundamentally and irretrievably flawed”, had “numerous factual inaccuracies” and made findings on certain issues outside the Public Protector’s mandate.

He will apply to review Mkhwebane’s report, its findings and remedial action.

“It should be a matter of concern for all South Africans that an office of such constitutional consequence as that of the Public Protector should make findings of such a nature against the head of state,” said Ramaphosa.

“It is therefore essential, as it should be in all investigations, that such findings are based on fact, that they have a sound legal basis, that they are rational and that they have been arrived at through a fair, impartial and lawful process,” he continued.

“Unfortunately, the report released by the Public Protector fails to satisfy these crucial requirements.”

Mkhwebane found the president deliberately misled Parliament in November 2018 when in answer to a question from DA leader Mmusi Maimane he said the R500,000 donation from Bosasa was for his son Andile. She said Ramaphosa should have declared the donations to his CR17 campaign, which she found were material benefits to the then-deputy president.

She instructed Speaker Thandi Modise to within 30 days refer him to the Committee on Ethics and Members’ Interests and to demand the publication of all donations Ramaphosa received in his CR17 campaign. She also instructed the NPA to investigate what she found was a potential case of money laundering.

Ramaphosa has disputed Mkhwebane’s calculations of the finances his campaign raised and on Sunday he noted that only the donations to CR17 and not other ANC presidential contenders, a number of whom were in Parliament at the time, have been made public (not to mention the funds donated to other party leaders for internal or external elections).

“It so happens that you will find that nearly everyone who campaigned to become president of this ANC raised quite a bit of money. And it so happens that we may never really know, the only one we know of now is the CR17,” said the president.

He said while he spoke at fundraising events during his campaign, his team handled the “intricate” details of donations.

“Yes, there was knowledge, but the knowledge to a large extent was also limited.”

Ramaphosa said he would call on the courts to hold an “expedited urgent judicial review”. His legal team are still working on the details of their application and whether the court review will need to include an urgent interdict to prevent the Public Protector’s binding remedial action from being implemented.

“The questions that will arise, of course, is whether there is a suspension [of the report] or will the expedited nature of it happen within the period that has been set by the Public Protector,” he said.

The courts have criticised Mkhwebane for her reports on the Estina dairy farm and Bankorp issues and some of Ramaphosa’s allies believe she is biased against the president’s administration. In another report being taken on review, she has also implicated Public Enterprises Minister Pravin Gordhan, a key Ramaphosa ally, in wrongdoing during his time as SARS commissioner.

Mkhwebane has denied she is biased and has continued to defend her reports in court.

“Whether the Public Protector is motivated by malice, I’m not going to comment on that because I truly respect the office of the Public Protector and from my own position as president I have to respect all the offices of Chapter 9 institutions and I will continue to do that because I have deep respect for our Constitution,” said Ramaphosa on Sunday.

“However, if we find, as we have found now, that there are flaws in some of their findings, our Constitution allows us to get those flaws adjudicated upon by the judiciary and this is precisely what we are doing. We’re not commenting on her competence, we’re not commenting on whether she has malice or whatever. We are just saying we want her to be principled,” he told journalists.

Mkhwebane launched her investigation into Ramaphosa after receiving complaints from the DA’s Mmusi Maimane, the EFF’s Floyd Shivambu and an anonymous whistle-blower.

In a statement on Sunday, the EFF said Ramaphosa should take a leave of absence while his review was underway, maintaining Mkhwebane’s recommendations must be implemented while the matter is in court.

“His press conference, which sought to recover lost integrity ground, was 30 minutes of blowing hot air without anything concrete,” said the EFF.

“No sitting president should be in direct conflict with a Chapter 9 constitutional office for things he is guilty of.”

Maimane said Ramaphosa should pay his own legal fees and Parliament should establish an ad hoc committee to consider the report and how to act against Ramaphosa. He said the NPA should investigate claims of money laundering.

“I note the decision by the president to seek judicial review as it is his right to do so. It’s equally vital for Parliament to establish for itself whether the Pres misled it. This is crucial for accountability. The rule of law is applicable to all,” Maimane tweeted on Sunday.

The Constitutional Court will on Monday rule whether Mkhwebane must personally pay 15% of the Reserve Bank’s legal fees in the Bankorp matter after the High Court found she was biased and did not understand her office’s duty to be impartial.

The Public Protector will be back in court on Tuesday when Gordhan challenges her report on his time at SARS.

The EFF has vowed to protest outside the North Gauteng High Court while the SACP and civil society groups have committed to defending Gordhan and others they believe are being targeted for trying to fight corruption. DM