As water systems fail across the country, rural communities look to self-supply 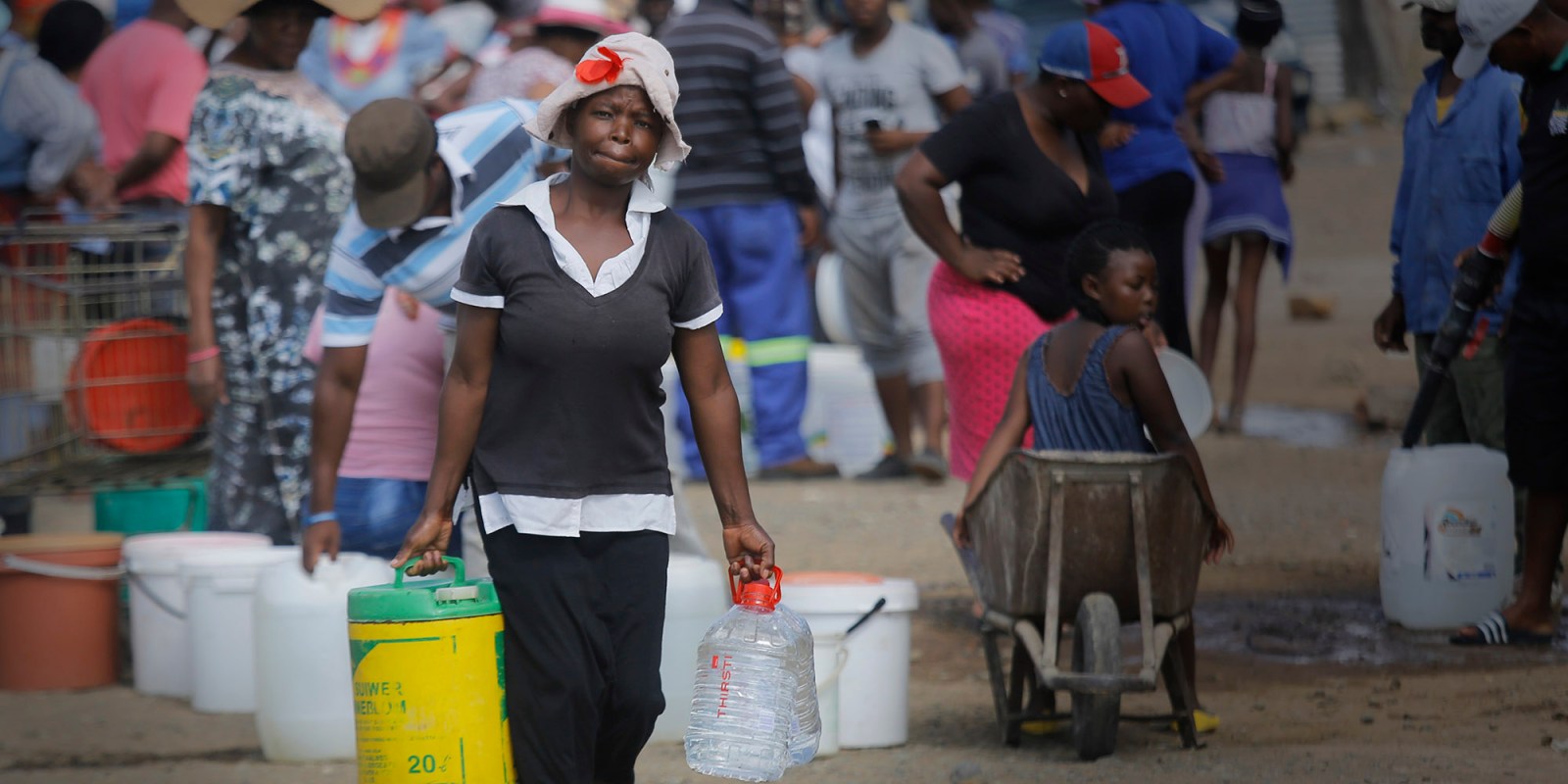 Residents queue for water at a distribution point in the farming town of Senekal in the Free State. (Photo: EPA / Kim Ludbrook)

About half of municipal wastewater and water treatment works across South Africa are in a poor or critical condition. Many need urgent rehabilitation, and 11% are dysfunctional. Over three million people still do not have access to a basic water supply service. Self-supply in partnership with government could be the answer.

In the lead-up to Mandela Day, we reflect on the many meanings of Thuma Mina. It’s a presidential campaign to re-ignite the South African spirit of working together and working for the nation. It’s a song of hope by Hugh Masakela. It’s a traditional church chorus. It’s the optimistic and disillusioned Ramaphoria that gripped many South Africans and that has seen a tapering out since elections. It’s also a “joke phrase” used to anecdotally describe the trouble South Africa is really in. Whichever way you choose to look at it, it’s a call (or a cry) to action.

Several national departments have begun to realise the importance of this call – one being the Ministry of (now Human Settlements) Water and Sanitation emphasizing the case for local water management and the need for partnerships to address the water service backlog, particularly in rural communities.

The department has acknowledged some sobering facts. Around half of municipal wastewater and water treatment works across the country are in a poor or critical condition. Many need urgent rehabilitation, and 11% are completely dysfunctional. Over three million people still do not have access to a basic water supply service and over 14.1 million people do not have access to safe sanitation. Some 77% of rural households are indigent (entitled to free basic water), which places a significant strain on municipalities with a low revenue base.

Added to this, most municipalities have not met water conservation targets set by the National Development Plan (NDP). At least a third of the 144 municipalities that are Water Services Authorities (WSAs) are regarded as dysfunctional and have very limited technical staff. Water services that have been provided since the advent of democracy are less and less reliable, with a third of households having no access to a reliable service. And the households that feel it most are those living in rural areas, informal settlements or backyard dwellings. They are at the epicentre of backlogs and service delivery protests.

But with South Africa’s developmental aspirations coming under strain, the government is waking up to the fact that when the going gets tough, the tough often get going… themselves. And often through innovative partnership models with government, civil society and the private sector.

More and more, the case is being made for “self-supply” of water services. So, Thuma Mina is the call that many communities have been realising for decades through supplying their own services. In addition to advocating for their right to water and better future services from municipal providers, communities are also leading their own approaches to planning, financing, construction, operation and maintenance of water infrastructure for multiple uses. Self-supply also helps communities to articulate their priorities and choose the technical designs that best suit their needs.

In contrast, conventional service delivery relies on feasibility studies, technical designs and construction led by consultants and contractors. Yes, they often employ better technology, but they are upward-accountable to their government clients, and not to communities. Much effort has been put into contractor-led investment in new construction, but there is now an acknowledgement that this has not always been sustainable. And it has not generally translated into local ownership of these developments.

An African Development Bank and African Water Facility-supported project, implemented by the International Water Management Institute (IWMI) and partners, found that in four of six villages in Limpopo Province, self-supply is the most important source of water for more than half the households surveyed. Most respondents use two or more water sources at their homesteads (other than rainwater harvesting). In four villages, this appeared to be the case for 71% to 91% of the respondents. In the village with the lowest service level, three quarters still depended on hand-dug wells.

Self-supply has also enabled irrigated cultivation in more than 73% of the households in four villages – consistent with another IWMI study that found self-supplied sources irrigating over four times as much cultivation as public schemes in Limpopo Province.

These investments are growing alongside growth in water needs, populations and socio-economic development. Gravity is a cheap energy source. New technologies become available. Market opportunities open up. And the catalyst for this progress? It’s often slow or inadequate public service delivery coupled with communities’ innovativeness and the urgency to obtain dependable safe water.

However, this complementary service delivery and support model has been met with resistance, particularly by governments, sensitive to criticism of their limited ability to provide services. Others have raised sustainability concerns and highlighted the tendency for over-abstraction. There are also worries over public health because of the use of unregulated raw water. As well, there are concerns over the inequity of having poor rural communities self-finance, not to mention the exploitation and profiteering by a few. And self-supply water sources can be quite rudimentary, often hand-dug wells, manually-drilled wells, pipes, reservoirs or rainwater harvesting systems supported through basic technologies.

Thus, self-supply does not mean that government has no role to play. On the contrary, governments should invest heavily in setting policies and standards, and monitoring the quality of installations and of water delivered. In this regard, the Draft Norms and Standards for Domestic Water Supply and Sanitation (2017) is a step in the right direction because it recognises the need to support self-supply. These standards propose that municipalities plan for higher levels of services for multiple uses.

But key support needs remain, such as ensuring that those excluded from self-supply are also being served, supporting affordable technology supply chains, and training local male and female technicians. Perhaps the step change we hope to see is for communities to provide their own services, and for government to create an enabling environment for them to do so by financing community-led local procurement and construction through a partnership model that will also create jobs.

So the tide is indeed changing, with government realising that it can’t go it alone and recognising the growth in community-led initiatives. With water crises escalating and services strained, it is about time government invests in communities as partners – and leaders – in water service provision. It’s time for Thuma Mina to be seen as a call for everyone to work better, together, and for government to deliver on financing the services they have committed themselves to provide. Working with communities, this can be done in ways that are timely and targeted to community needs. DM

Claudia Sadoff is the director-general for the International Water Management Institute (IWMI); Inga Jacobs-Mata is the South Africa country representative for IWMI; and Barbara van Koppen is a principal researcher at IWMI.

In alignment with UN Water’s 2019 theme “Leaving no one behind,” IWMI has launched a communications campaign for more inclusive water governance called “Voicing Water Visions.” Every month, IWMI produces a story about a specific water-related social inclusion issue, as described through participatory photography and videography by the people who are most affected. The stories so far have covered hydropower in Nepal, farmer-led irrigation in Ghana and multiple-use water services in South Africa, all of which are published on IWMI’s new multimedia stories platform: http://stories.iwmi.org/voicing-water-visions/mus-south-africa/