Police and developers blame each other for unlawful evi...

Police and developers blame each other for unlawful eviction 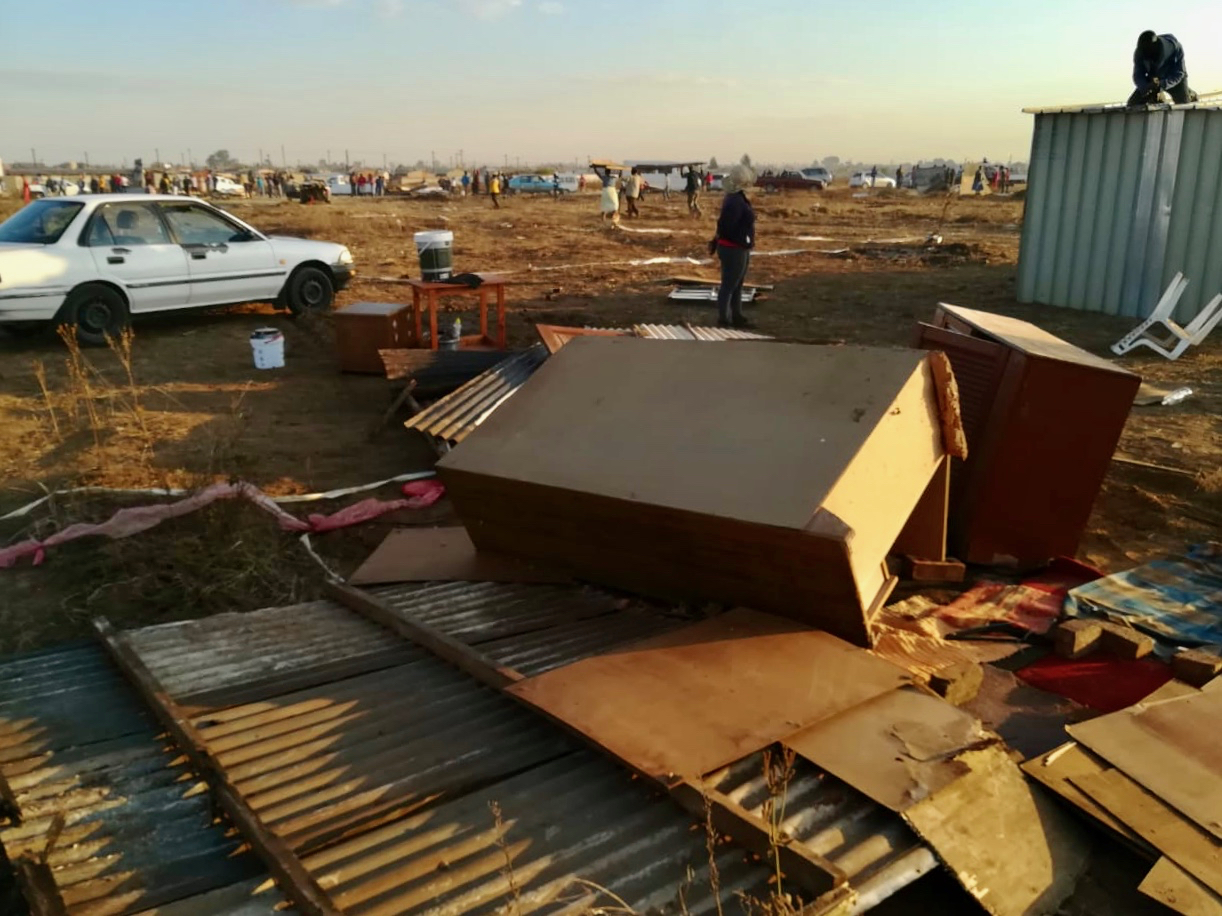 Land occupiers in Mayfield intend to bring a contempt of court action.

About 50 people who occupied vacant land in Mayfield, East of Johannesburg, were left homeless for the third time in two months after being evicted by metro police last week.

All three evictions were done without court orders and despite ongoing litigation between the occupiers and non-profit organisation Mina Nawe Housing Developers, which owns the land.

The first eviction was conducted by SAPS and the Ekurhuleni Municipality Police Department (EMPD) on 6 May 2019, about a week after the land occupation started. The second eviction came three weeks later (28 June). The most recent was on 2 July.

On 25 June, Judge Fiona Dippenaar in the South Gauteng High Court ruled the first eviction unlawful as there was no valid court order. But this did not stop EMPD, SAPS and Mina Nawe from continuing evictions.

One of the occupiers, Khanyisile Mashele, said:

“This has been very stressful on us… The court has not assisted us in any way because it has not stopped the EMPD from evicting us… It was just a waste of time and money.”

Mashele said some of the evictees were now living in a church hall nearby as they had nowhere else to go and most of them were struggling to get enough money to buy shack materials to rebuild.

Advocate Livingstone Nkuna, representing the occupiers in court on 25 June, argued that the eviction had been illegal. He said Mina Nawe should have used the Prevention of Illegal Eviction from and Unlawful Occupation of Land Act (PIE) to evict the occupiers.

PIE requires a court to consider whether the occupiers include vulnerable people and whether they will be left homeless, in which case the state must provide alternative accommodation.

Nkuna said court papers were never served on the occupiers, so they were unaware of the action against them.

Judge Dippenaar said Mina Nawe had approached the court to get an interdict against the occupiers. She had granted an interim order to have the occupiers evicted because Mina Nawe appeared unopposed, but she had instructed Mina Nawe not to use that court order until it had filed supplementary papers.

Mina Nawe filed the papers on 9 May, but the eviction happened three days prior.

Mlisana denied that Mina Nawe had used her draft order to evict the occupiers.

“[Mina Nawe] did not give out any instruction to carry out an eviction… It had no role in what the police did and it is up to [the police] to say why they [evicted].”

Judge Dippenaar said she was not convinced that Mina Nawe followed procedure. She ordered the eviction unlawful because there was no finalised court order at the time it was executed, and she set aside the order she had made on 10 May.

Sibusiso Nkomo, one of the directors of Mina Nawe, told GroundUp that the company now intended to evict the occupiers using the PIE act.

After the order was set aside, the occupiers moved back on to the land on 25 June. Three days later, EMPD and SAPS returned to evict the occupiers, again without a court order.

The occupiers went back to court after filing an urgent application to stop the evictions.

Judge Ramarumo Monama, presiding, said Nkuna should have brought the matter as one of contempt of court rather than an urgent application, because “the order that you want me to make is already there” (Judge Dippenaar’s ruling on 25 June).

He said the occupiers had a right to be on the land until the owners obtained a court order. Anyone who evicted them was therefore in contempt of court.

Nkuna said metro police had interpreted the setting aside of the order differently – that the occupiers needed an order that explicitly said they had a right to be on the property.

Judge Monama dismissed the application, saying the court could not rephrase an order that effectively existed.

However, advocate Emmanuel Sithole, representing EMPD, said metro police were misled by Mina Nawe, which gave them the order from 5 May (which was set aside on 25 June).

“When EMPD [evicts people], we are not doing it on our behalf. We are doing it on instruction from the court and on behalf of Mina Nawe… [The occupiers] can nail [Mina Nawe] all they want, but it cannot be directed towards EMPD because we are just the messenger,” Sithole told GroundUp.

He said EMPD had been unaware that the matter had been in court prior to the eviction.

“We have been made a party here, so now we know about this and we won’t be involved from here on out,” he told GroundUp on 1 July. But the next day, EMPD was on site evicting the occupiers for the third time.

Mashele said the occupiers will proceed with a contempt of court application.

The occupation started on 27 April when about 100 people from surrounding areas began demarcating stands and building structures on the vacant land. Some were unemployed and could no longer afford to rent. Others wanted to build their own homes.

Leader of the occupation, Steven Xulu, said some occupiers had been living on the land for a week, while others, including himself, were busy building when EMPD and SAPS evicted them on 6 May.

“The first thing I did was approach EMPD and ask them to show me a court order, but they couldn’t show it to us,” said Xulu.

He said the police started burning materials. The community retaliated by protesting in the street. To disperse the crowd police fired rubber bullets, said Xulu.

Xulu and 10 other people were arrested for trespassing and public violence. Nine were released on R500 bail, but two remained in custody due to complications with their IDs.

Maria Nkosi had spent one night in her shack. She was cleaning when she heard “screaming and loud noises”.

“I went to see what was happening and that’s when I saw the police demolishing and burning structures,” she said. “I left with my handbag, ID and some pots… They also took my materials, so I don’t know how I am going to rebuild now.”

Victor Matsomane was erecting his shack at the time of the eviction. He and some of the other occupiers are the grandchildren of former farm workers who used to work the surrounding land before it was developed. They say the land was donated to them and the community when they were relocated in 1991.

“We have suffered for too long. This land belongs to the community, so why shouldn’t we live here?” asked Matsomane.

But Mina Nawe’s Nkomo said the former farm workers had been misled. He said the 16,000 hectares of land was bought by Mina Nawe for R7.2-million in 1996 and the occupied land was intended for a new township with 1,700 residential stands.

“When we started Mina Nawe, our aim was to build affordable housing for the community… so we hope that the government will buy about 30% of residential stands for RDP and low-cost housing,” he said.

Nkomo could not provide a timeframe for the development, but the aim was to get the sewers and water running by early 2020. He said he was happy that the occupiers took the matter to court because it would show them that the land did belong to Mina Nawe. He also said he was thankful for the support from EMPD in assisting him with evictions.

“I don’t understand how [the occupiers] think they can have a right to be on my dwelling … Let’s say they do have the right, who is going to supply them with water and sanitation? How do I get water connected for my enemy?” asked Nkomo. “You would think talking to them would make them understand, but they have just escalated this issue… My biggest mistake was making myself accessible… I have been too lenient on them.” DM