Yes, I’m a hunter. My targets are duplicity, lies and cruelty 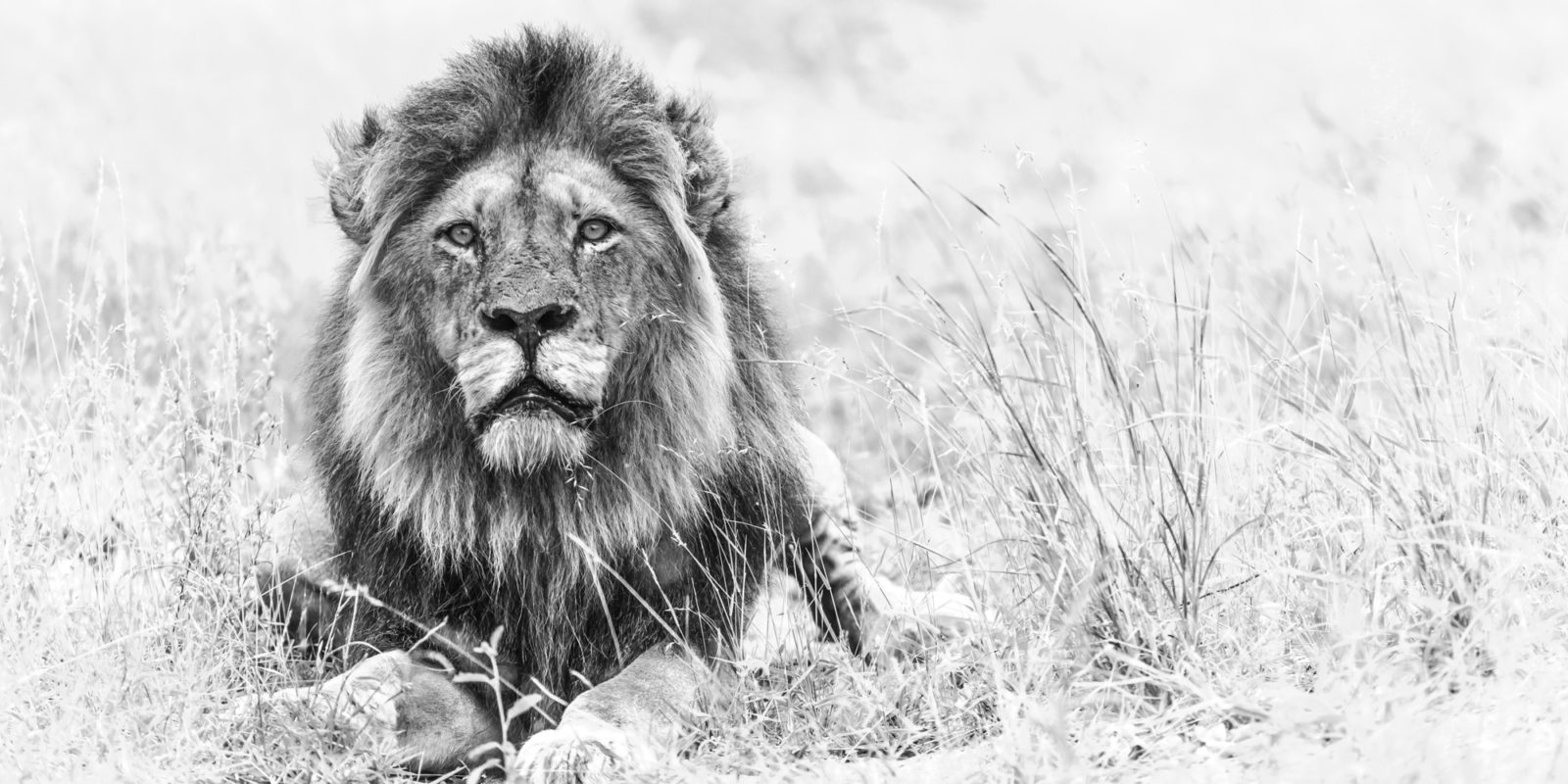 We are left to contemplate the needless deaths of keystone animals like lions Skye, Cecil and Voortrekker – not dusty old males hunters claim they hunt, but beautiful creatures in the prime of their lives destined to bolster someone’s ego and bragging rights, says the writer. Photo: Charlie Lynam)

The trophy hunting industry is on the wrong side of history, serves the macabre leisure pursuits of a handful of the wealthy elite and yet, bizarrely, we environment writers are the ones vilified for trying to call it to account.

As every journalist knows, a disaster without a face is just a number. You tell the bigger story through the individual. Exactly a year ago, that face was a beautiful pride male lion named Skye. Last month it was the huge male desert-dwelling elephant named Voortrekker. Four years ago it was the lion, Cecil.

Trophy hunters don’t like the animals they shoot having names. It enables the public to identify with them as individuals. And as individuals, they easily become a synecdoche – a lens – through which to assess trophy hunting as a sport.

That makes hunters and their apologists uncomfortable. Rather keep it scientific, clinical. We’re just cropping ageing game in a well-regulated sport. It’s sustainable and helps local communities. It keeps cows and goats out of the wilderness.

News that questions this version of reality is hotly contested. Each story written by environmental writers like Elise Tempelhoff, Ross Harvey, Ian Michler, Simon Bloch, John Grobler, Louzel Lombard Steyn or myself never fails to elicit angry rebuttals in support of hunting. Here are a few among the many:

Kent journalism professor Keith Somerville claims those opposing hunting are card-stacking facts or falsehoods and cherry-picking (though he misses the irony that he does just that). What we write, in other words, is not news, but propaganda.

Swedish hunter Jens Ulrik Høgh complains that those who support trophy hunting are being “actively demonised, outnumbered, interrupted and treated like the scum of the earth”. Really?

In response to an article about the killing of Voortrekker, US-based Safari Club International (SCI) posted that the writer “John Grobler et al. seem to focus on bringing disrepute upon communal conservancies and sustainable hunting in Namibia. Their relentless rhetoric has fuelled the fervour of many desktop anti-hunting social media activists.”

It fails to mention, of course, that the SCI hunting achievement programme and awards fuel a global guiding and outfitting industry and drives binge hunting for many of the rarest animals on earth.

The pro-hunting Conservation Frontlines website sees the conflict being between “various hunting organisations and a coterie of short-attention-span journalists and tourism operators who style themselves as conservationists”.

Hunter Ron Thomson is always quick to rush into print to kill the messenger and defend the right to gun down elephants. His speciality seems to be mass culling. He claims Botswana has doubled its elephant population (in fact the population has been stable for 19 years). He recommends shooting half of them (around 50,000) and ruminates on the limitation posed by insufficient abattoirs.

The noise in defence of trophy hunting is understandable – it’s getting a very bad name and there’s growing public pushback.

Conservation Frontlines writers Malan Lindeque and Rosalia Lileka have the solution: just rebrand it. Remove all reference to “sport” or “fun”, reposition it as “conservation organisation hunts” and ensure that hunting “demonstrably contributes to conservation”. But of course, do not for a moment question whether it’s okay to kill wild animals.

As a journalist – a real one and not, as depicted, a greenie propagandist – the barrage of criticism has an effect. It’s exhausting having to rebut the same old hoary arguments.

Are we environmental writers and NGOs really completely blind to the virtues of trophy hunting? Well no, I don’t think so. The UN Report on Biodiversity out two months ago was a wake-up call. It warned that about a million species are on the brink of extinction, including many of the species being hunted for pleasure. A Born Free report just out: Trophy Hunting – Busting the Myths and Exposing the Cruelty, has alarming figures on the volume of trophies. 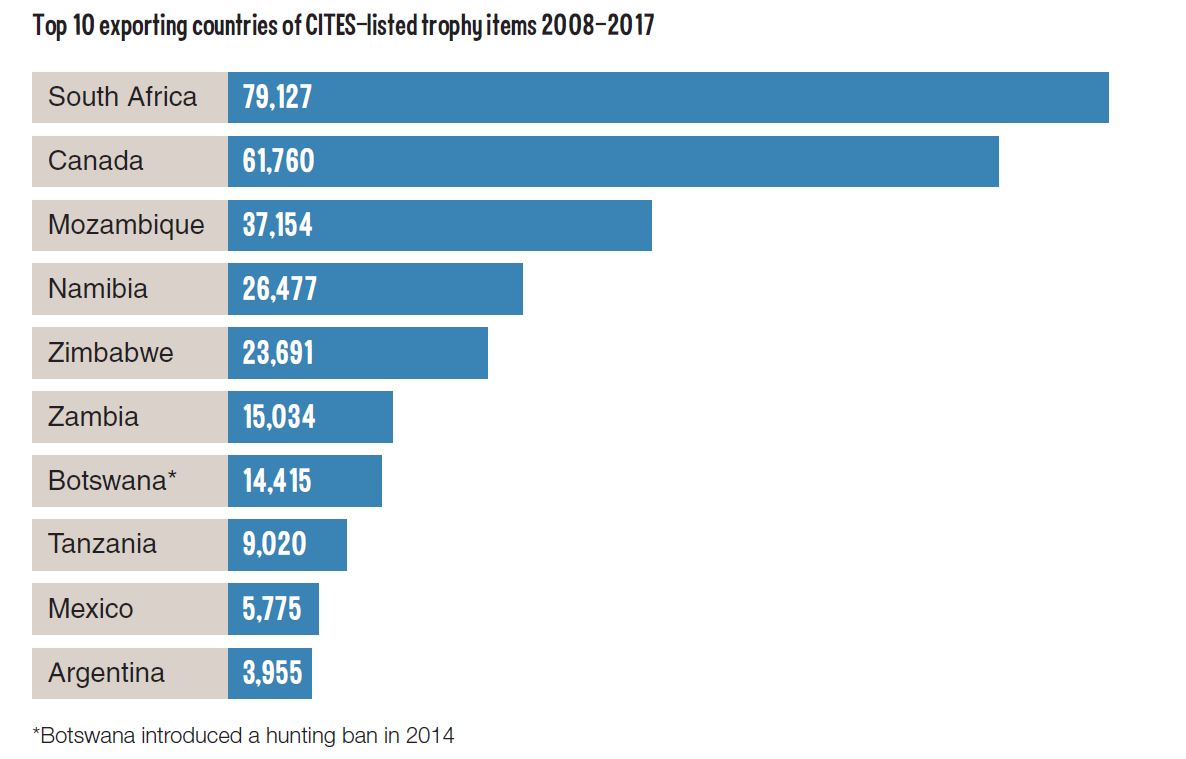 “These figures only reflect those trophies derived from species that are protected by international agreement, the export of which is subject to an international permitting system,” the report says.

“When you consider the many trophies derived from the hunters’ own countries, for which official records may not exist or are much more difficult to obtain, these figures represent the tip of a very large iceberg.”

The Born Free report documents the cruelty of trophy hunting, its failure to support conservation, the cheating of local communities out of hunting revenues, and the complete disregard for animal welfare. And this in a world where the populations of the animals that trophy hunters target are, for the most part, plummeting.

“They also often claim that by targeting problem or redundant animals their activities represent a legitimate form of wildlife management. But their claims do not withstand scrutiny.”

Their major motivation, says the report, appears to be admiration and affirmation from fellow hunters, which they increasingly seek through social media and other online platforms. “The trophy hunting industry encourages this behaviour by offering awards for the number and types of animals bagged by hunters, and the variety of methods and weapons used to kill them.

“Despite their claims, trophy hunters do not generally target problem, redundant or old and infirm animals. They prefer to set their sights on animals with impressive traits – the darkest manes, the biggest tusks, the longest horns.

“This often results in the killing of key individuals, removing vital genetic resources and causing disruption to family groups, populations and, by extension, the wider ecosystems of which they form a part.”

Then there’s the money.

A report by the International Union for Conservation of Nature (IUCN) in 2009 estimated the annual hunting turnover for 11 countries in Africa that permit big game hunting was 0.06% of their combined annual GDP, generating an average of just $1.1 per hectare.

An analysis of data published by the pro-hunting International Council for Game and Wildlife Conservation and the UN Food and Agriculture Organisation found much the same. It noted that hunting companies contribute on average 3% of their revenues to communities living in hunting areas. The vast majority of their turnover goes to government agencies, outfitters and individuals located in national capitals or overseas.

In Zambia, the government’s Wildlife Department is committed by law to returning a 50% share of trophy licence fees and 20% of hunting area concession fees to Community Resources Boards (CRBs) and chiefs in areas where trophy hunting takes place.

However, Born Free’s investigation found that little, if any, of this money ever reaches them. As a result, local people have a negative attitude towards trophy hunting, accusing the government and Department of National Parks and Wildlife of corrupt practices and of exploiting wildlife for the benefit of others, including officials, outfitters and professional hunting guides.

Of particular concern to Born Free in its report was the generally neglected welfare of the animals hunted, an issue often derided by the hunting fraternity. While in most countries there are strict rules about the killing of farm animals, no such protections apply to wild animals.

“While some hunting organisations acknowledge that trophy hunters have a responsibility to avoid inflicting undue suffering, many offer awards for methods of killing a trophy animal which might include the use of bows and arrows, handguns, or ‘traditional’ weapons such as muzzleloaders or spears. These methods clearly do not prioritise the welfare of the target animal and are likely to increase the possibility of suffering.”

Because heads are displayed, it says, there’s the increasing probability that a body shot will be favoured, reducing the likelihood that a clean kill will be achieved and increasing the possibility that the animal will suffer.

“In order to give wild animals a secure future,” concludes the Born Free report, “we must learn to treat them with far greater respect and find alternative ways of realising value from wild animals and nature through non-lethal, ecologically and economically sustainable practices that will benefit wild animals and people alike.”

Now let’s step back for a moment and consider. There are very few NGOs and environmental journalists documenting the activities of a wealthy and often callous hunting industry and supportive governments which turn their face away from corruption and animal cruelty.

The trophy hunting industry is on the wrong side of history, serves the macabre leisure pursuits of a handful of the wealthy elite and yet, bizarrely, we are the ones vilified for trying to call it to account.

That industry doesn’t approve and we get vilified for the temerity to challenge it.

We could all be social reporters or cover crime, do the social beat or become sports writers. But, I’ll be honest, it’s the duplicity, lies and cruelty threaded through the hunting industry that keeps me hammering away at environmental issues.

The smokescreen of deception thrown around the hunting of Skye in Greater Kruger was a red flag screaming “Investigate Me”, which the parliamentary Environmental Committee did. Along the way, Kruger Park was roasted for failure to obey a parliamentary instruction. But in the end, nothing came of it. After all, the hunter had a government-issued licence.

So we’re left to contemplate the needless death of keystone animals like Skye, Cecil and Voortrekker – not dusty old males hunters claim they hunt, but beautiful creatures in the prime of their lives destined to bolster someone’s ego and bragging rights.

It’s a sad reflection of our species. Permit me to conclude with a (slightly altered) verse from Blowin’ in the Wind by Bob Dylan: