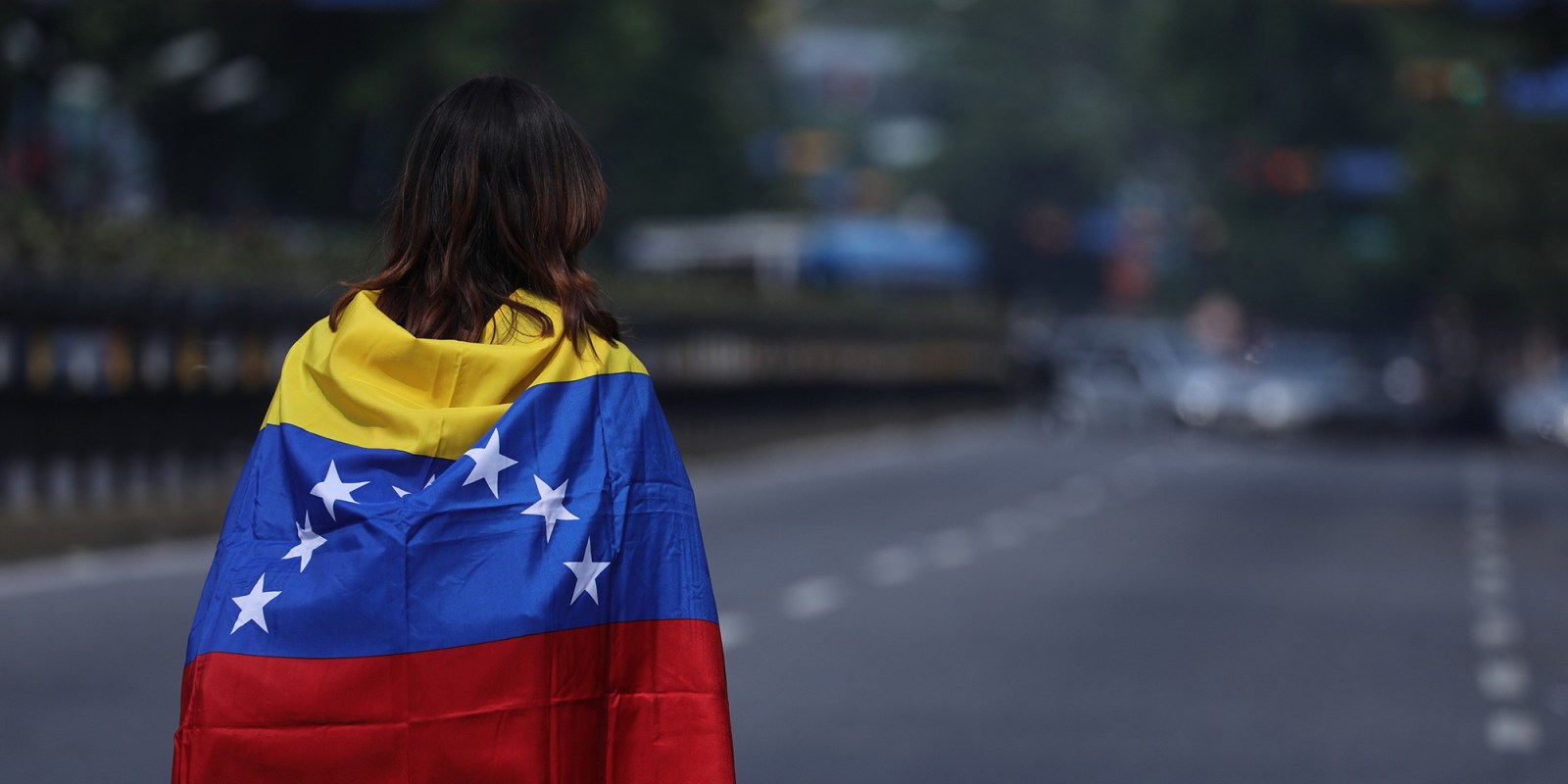 A woman wraps herself in a Venezuelan flag during a demonstration in Caracas, Venezuela. (Photo: EPA-EFE / Miguel Gutierrez)

Like many ANC freedom fighters, hundreds of Venezuelan political leaders and activists are forced to live in exile if they do not want to end up in prison. South Africa and the ANC must understand the negative message they are sending to their Venezuelan allies who supported them during the liberation struggle.

Despite the massive current human rights violations and the severe political persecution in Venezuela, it seems that the ANC-led government is blind to the fact that the political groups in Venezuela who helped the ANC and other liberation movements to overcome the Apartheid regime are nowadays the ones who are suffering from the oppression by Maduro’s regime.

In 1958, Venezuela entered its democratic period after the end of its military dictatorship. Two political parties alternated power until the early 1990s: the social-democratic Acción Democrática (AD) and the Christian-democratic Comité de Organización Política Electoral Independiente (COPEI). During the 40-year period of bipartisan democracy in Venezuela, the country enjoyed political stability and high economic growth.

In foreign policy, both political parties strongly opposed the South African apartheid regime at all times. In several international organisations and through different initiatives, Venezuela raised its voice against the inhumane apartheid regime. Motivated by the Christian belief that any kind of racism goes against human dignity and out of anti-colonial sentiments, Venezuela was a reliable and helpful ally in the struggle against apartheid.

Consequently, Venezuela was a leading supporter of one of the first motions in the General Assembly of the United Nations, urging that the question of apartheid should be a subject of debate. Being racially mixed itself, Venezuela rejected any kind of racial discrimination. Arcaya’s successor, Ignacio Iribarren Borges, said that there is no argument which justifies oppression and segregation on the basis of skin colour. In the General Assembly, he condemned the apartheid regime several times.

Having a colonial past itself, Venezuela was a strong supporter in the creation of the Decolonisation Committee in 1961, where, amongst others, the cases of then Southern Rhodesia, South West Africa/Namibia and South Africa were discussed. Together with African states, Venezuela also supported resolutions in the Security Council of the United Nations which called upon South Africa to end its human rights violations and release all political prisoners.

The numerous Venezuelan efforts, many of them not even mentioned here, were recognised by the ANC in the past. In July 1991, Nelson Mandela visited Venezuela, where he was welcomed with presidential honour. Mandela thanked the Venezuelan people for their continuous unwavering support in the struggle for liberation in South Africa and the decolonisation efforts in Africa. Finally, he could receive the doctor honoris causa, which the University of Carabobo awarded him in absentia in 1988, as well as the Unesco Simón Bolívar Award of 1983.

In 1998, left-wing populist leader Hugo Chávez came into power in Venezuela and paved the way to an increasingly authoritarian regime. With his socialist and anti-Western rhetoric, he dazzled many people and political leaders in Africa. They seemed not to know that the socialist government was spending the country’s oil rent in an unsustainable way and that its leaders self-enriched themselves exorbitantly.

When Chávez died in 2013, his successor Nicolás Maduro maintained the same disastrous economic model and oppressed any kind of opposition. Like South Africans during apartheid times, Venezuelans today suffer political persecution and massive human rights violations. Like many ANC freedom fighters, hundreds of Venezuelan political leaders and activists are forced to live in exile if they do not want to end up in prison like their fellows.

In October 2018, a delegation of two Venezuelan MPs from the opposition alliance visited South Africa and tried to explain the situation in Venezuela to the South African government. DIRCO (Department of International Relations and Co-operation) did not even respond to the delegations’ request for a meeting. In April 2019, an ANC delegation visited Venezuela and backed the Maduro regime. Among Venezuelans, it causes pain to see how the ANC government is teaming up with the Maduro regime instead of supporting freedom and human rights for Venezuelans.

South Africa, and especially the ANC, must understand the negative message they are sending to their Venezuelan allies who supported them during the liberation struggle. To repeat, the Venezuelan people hope that the South African government under President Cyril Ramaphosa will review its position towards the situation in Venezuela. Otherwise, it would be obvious that they have forgotten about their own history and their former friends. DM

Edmundo González Urrutia is a Venezuelan diplomat and former director-general for political affairs in the Venezuelan Ministry of Foreign Relations. He is a member of the board and international relations co-ordinator to the institute for parliamentary studies, Fermín Toro, in Caracas. He was a career diplomat in the Venezuelan Foreign Service for more than 30 years. He served as Venezuela’s Ambassador to Argelia in 1991-1993 and in Argentina 1998-2002. This article is an abstract on his research paper, Venezuela and the struggle against Apartheid: A Foreign Policy of the State and of National Consensus.