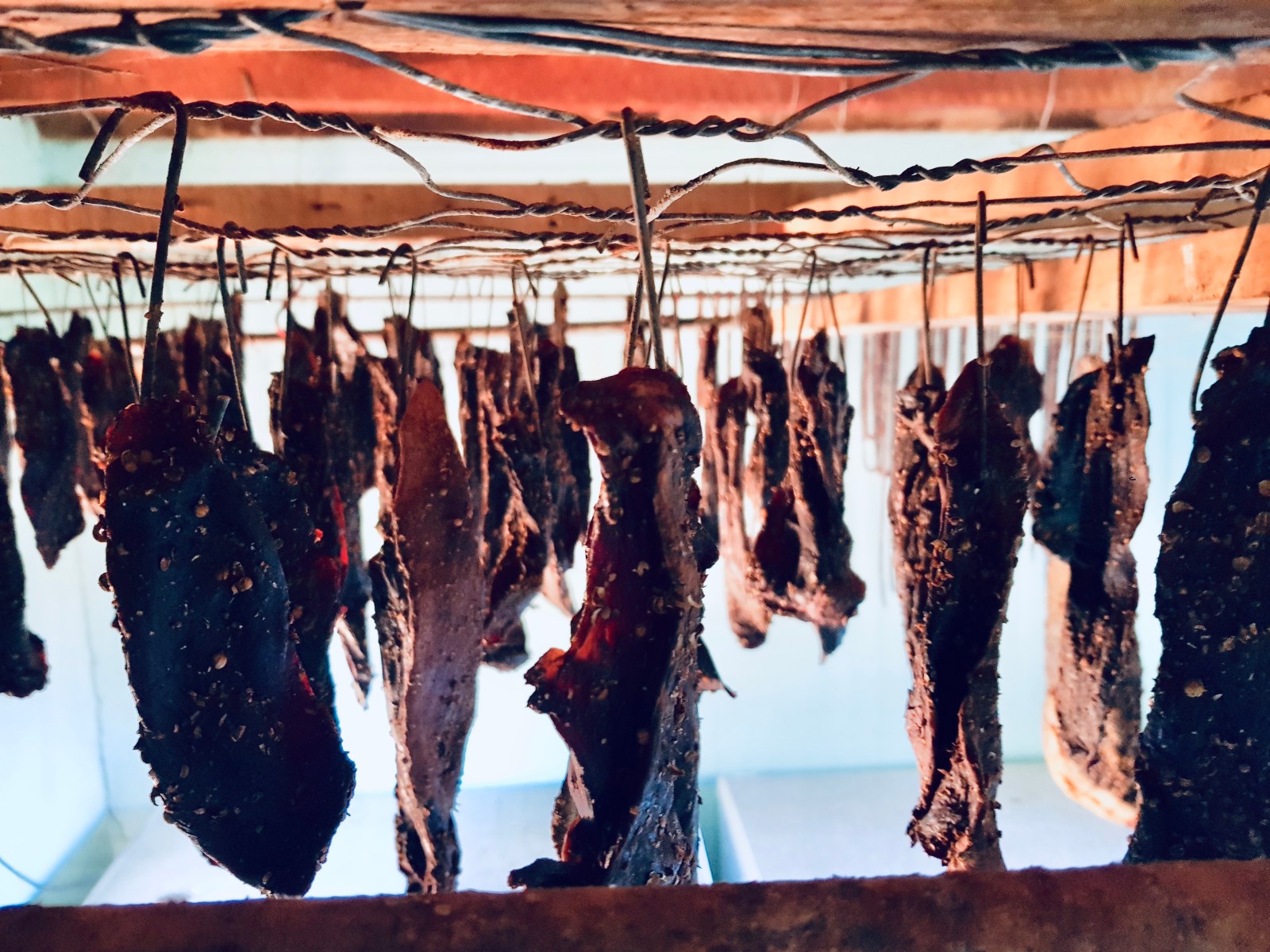 It’s the prosciutto of South Africa, it’s smuggled across the world’s borders, there’s a precise science to its making, and it’s the focus of a R2.5-billion domestic industry. Let’s bite into biltong.

Give any meat-loving South African a chance and they’ll you about their favourite kind, their first biltong memories and the way they’ve hooked their foreign friends on it. We can get lyrical. And so we should.

One biltong-loving WEG! reader, Buks Barnard, describes beef biltong as “a gift of the gods and a way to world peace”. He’s not wrong. Biltong is synonymous with being South African.

South African children are weaned on biltong; a dry piece makes for a tasty teething stick. Biltong is smuggled across many international borders to SA expats longing for a taste of home. It’s a meaningful “gift” to the local traffic department staff when you’re trying to pass your driver’s licence. It’s the go-to gift for Father’s Day and I’ve yet to hear a dad complain. It’s also big money. According to the South African Institute, Food & Trees for Africa, the biltong trade is worth R2.5-billion.

There is an exact science to making the perfect biltong – from the cuts to the drying. It starts with the meat. As with everything farm-to-table, working with the utmost respect when making your own biltong is of paramount importance. It requires only the prime cuts. When working with venison, it’s usually the fillets, backstraps and legs that can be utilised.

I suppose you can make biltong from other cuts, including the forequarters, but this will ultimately compromise the integrity of the product. See, biltong is like the prosciutto of South Africa. No worthy Italian would dare make prosciutto with any cut other than the leg. South Africans shouldn’t compromise with their biltong, either.

This is not to be snobbish. Like Italian prosciutto, real, good South African biltong is made up of only meat and spice. Hence, everything needs to be perfect. Biltong, first and foremost, should not be tough or difficult to eat.

Take a good piece of venison biltong, for example. It should never be too big. And it needs to be dried entirely; you should be able to break off a piece with a strong, clean twist of the wrist. There needs to be a specific quality to it.

To ensure this, you need to know how to access the different cuts in the leg. This way, you will be able to remove and trim all the unwanted bits – sinew, glands, membranes and veins – without wasting any valuable biltong meat. Even with the unwanted stuff removed, you need to know where to make the cuts to ensure biltong pieces never contain a sinew in the centre.

You’ll start off by surgically removing the silverside from the leg. Importantly, you need to do this without cutting into any part of the actual flesh. The silverside comes from the outside of the rear leg and sits between the knuckle and the topside. It’s named after the silver wall of connective tissue that sits on the side of the cut. If you know where to cut, you can remove the whole piece without damaging any meat.

With the large silverside removed, the leg exposes the remaining cuts, to be taken out using the natural “seams” of the product. The eye round is next and, depending on the size of the animal, can be used as is for a tender biltong strip. This cut is one of the muscles that make up silverside; it sits on the outside thigh of the hind leg. You can choose to remove it as part of the silverside, or after.

If you’re making venison biltong, the remaining rump, thick flank and topside are then exposed and ready to be removed. After, all the cuts can be trimmed and cut into biltong strips. It works slightly differently for beef, as many of these cuts are prime steaks or great for corned beef and stews.

If venison is biltong-making 101, beef biltong requires a PhD – and a very strong arm. A leg of beef easily weighs more than 60 kilos, with single cuts being up to 10kg each. It’s hard work, but if you know what you’re doing, it makes for the most sought-after South African snack on the market.

Ideally, biltong should be savoured… and the best way to achieve this is to eat it slice by slice with a knipmes (pocket knife). Or, sliced thinly and eaten on toast. I’ve seen a single slice of beef biltong cover the length and width of a plaasbrood slice. “Dit wil gedoen wees (It wants to be done),” I can almost hear my great-grandmother brag. She was famed for her thick cuts of perfectly cured biltong. She also cut off of the end pieces of hanging biltong after about three days or so, when it was dry but still raw, and fried it in the pan like a steak. Talk about “dry aged”…

Apart from being lekker, biltong connects us to our earliest South African food roots – and they grow deeper than you might think. Yes, sure… the Voortrekkers did indeed rely on biltong when they trekked over the Drakensberg Mountains. The Great Trek was indeed where the first traditional biltong recipes and methods were experimented with and standardised. But biltong didn’t start there.

Biltong was, in fact, the brainchild of SA’s earliest inhabitants, the hunter-gatherer San and the pastoral Khoekhoe, collectively referred to as the Khoisan. In those early days, hunters would spend days – even weeks – tracking a herd of animals with bow and arrow. The objective was to hunt to secure enough food for survival. And when an animal was finally killed, it needed to be utilised 100%. Cutting meat in slender strips and drying it ensured that everything could be eaten – but over a long stretch of time.

Nutritionally speaking, it doesn’t get better than biltong. As well as being a phenomenal source of protein (up to 67%, all highly digestible), it is also rich in iron, vitamin B12, zinc and creatine. It’s high in calories (300 in about 100 grams) which would have been a very desirable quality for an early Khoisan hunter and his family. For more modern biltong lovers, an impressive accolade is that it doesn’t (or shouldn’t) contain any additives or preservatives. Just a fair amount of salt.

Save for size and weight, the biltong cutting method for venison or beef biltong strips are similar. However, the two products differ vastly. Venison biltong, as mentioned, needs to be dry. It’s also always lean. Cuts are smaller to ensure the meat can dry out fast and completely.

Beef biltong has the opposite qualities. It’s preferred fatty and slightly “wet” with a distinctive red hue. Importantly, the quality of fat in beef biltong can serve as a clear indication of the quality of beef. White fat is no good, while an even layer of yellow fat on the rim is sought after.

Spices for venison and beef biltong also differ. Venison was first made with salt only, but with the arrival of the Dutch East India Company came more flavouring options. Today, venison biltong needs little more than the basic mix of salt, pepper, crushed and toasted coriander and vinegar. It’s important that the distinct flavour of the meat is never overshadowed by spice.

If you’re making beef biltong, brown sugar, saltpetre and baking soda are typically added to the coriander, salt and pepper blend. Beef biltong is made with much larger strips of meat, and the extra ingredients are added to help preserve the large chunks of meat.

Then, the drying. These days, biltong can be made throughout the year in many regions. In the past, however, biltong was made during one of two months of the year as meat needed to be processed without the help of cooling and drying facilities. With the invention of cool rooms, biltong curing boxes and a whole array of other biltong gadgets, biltong became more readily available. It’s now possible for city-dwelling South Africans to make their favourite farm-to-table snack from scratch – even in London and Brooklyn! Go figure.

To be clear: Biltong is much more than a mere snack. It originated as a genuine means of survival and has meant this – survival – for every generation that has followed. From the Khoisan, who first hunted and made biltong, to the Voortrekkers who carefully developed the recipes and methods, to every remote South African who feels a surge of longing and pride when snacking on a parcel of biltong sent from the Mzansi homeland.

Our traditional beef biltong recipe can be worked out depending on the quantity of meat you have available.

Mix together all the dry spices and vigorously massage into the beef strips. Drizzle a little vinegar at the bottom of a large, clean tray and start layering the salted strips. Sprinkle vinegar between every layer. Let marinade for at least 24 hours before turning over into another tray. Make sure the beef strips that were on top are now on the bottom. Let marinade again for at least 24 hours. Using biltong hooks, hang up in a cool, dry area until the desired consistency is achieved (about two to three weeks). Store in a paper bag or old flour bag (meelsakkie) when dried. DM