A whale of a controversy erupts as a second whale dies... 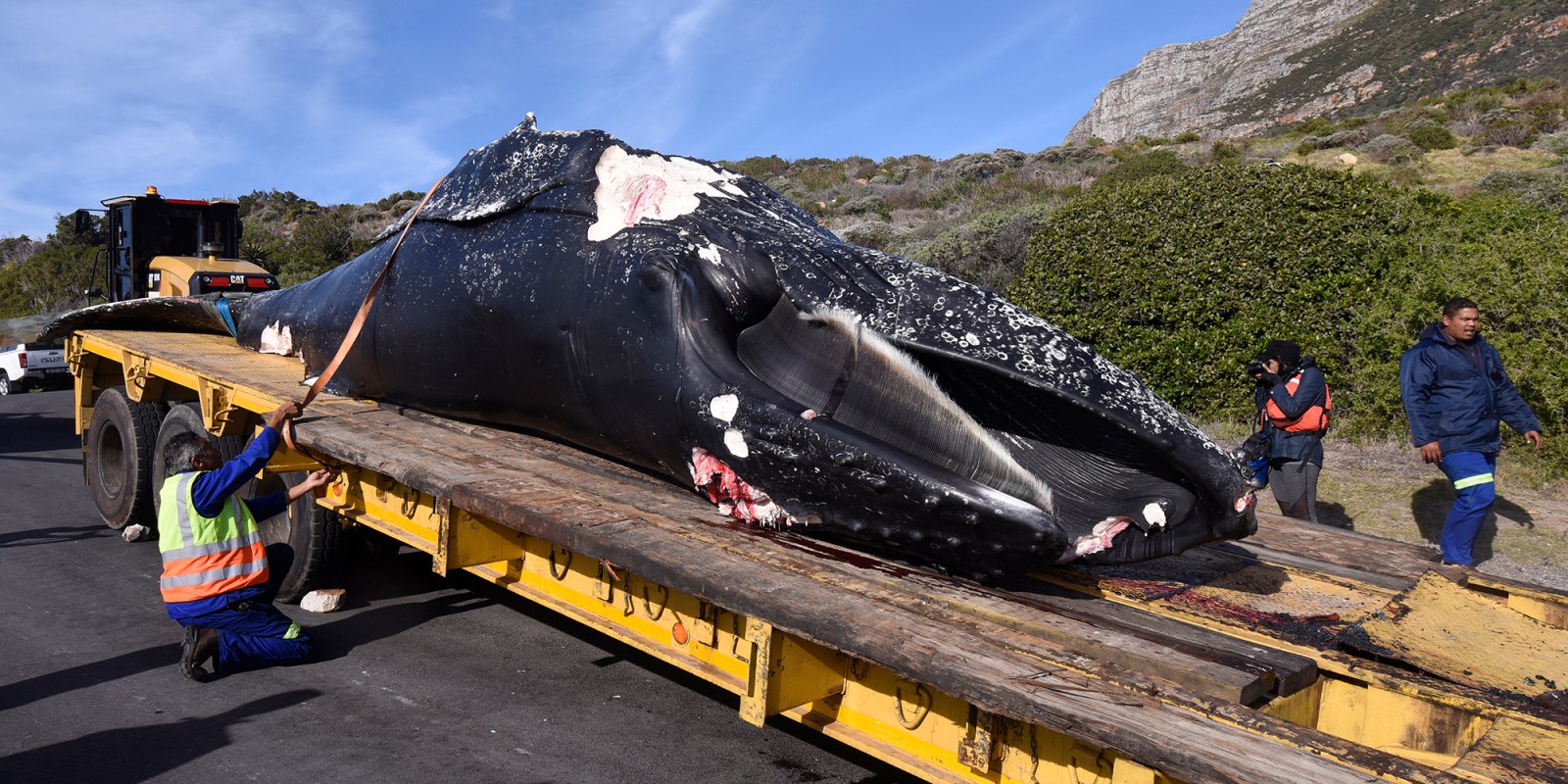 A carcass of a young humpback whale, about eight metres long, that was killed during octopus fishing is retrieved on June 27, 2019 in Cape Town, South Africa. According to the City of Cape Town officials, the humpback whale was entangled in an octopus fishery line and had drowned. This is reportedly the third entanglement and second fatality of whales as a result of the octopus fishery in the last two weeks. (Photo by Gallo Images/Brenton Geach)

The City of Cape Town has called on Environment, Forestries and Fisheries Minister Barbara Creecy to issue a moratorium on octopus trapping in False Bay, following the death of two whales in two weeks as a result of the controversial industry.

Late in the afternoon of Wednesday, 26 June, the carcass of a juvenile humpback whale was spotted off of Sunny Cove in False Bay. The animal was left floating overnight until city officials from the Environmental Management Department’s Coastal Management Branch, with assistance from Cape Town Octopus – the company at the centre of the controversy – were able to retrieve it early on Friday morning.

It was the second whale to have died in just two weeks, both allegedly having drowned after becoming entangled in fishing line attached to octopus traps.

The death of a Bryde’s whale on 11 June sparked outrage on social media platforms such as Facebook and Twitter, with citizens calling for the industry to be shut down after media reports revealed that the octopus trapping permit is classified as experimental rather than commercial. The official number of whales that have died as a direct result of becoming entangled in octopus traps is not known – some reports indicate that nine whales have died over the last few years, while others say the humpback whale is only the third to drown.

But Garry Nel, General Manager of Cape Town Octopus, told Daily Maverick on Thursday that the latest whale death was not as a direct result of his current gear.

“It was a line that was lost seven years ago in another detanglement operation from a separate vessel all together that was one of the very first research boats in that area using gear with no modifications. We assisted the NSRI in that detanglement, and they cut the line and we never found that gear again.”

Nel has operated in False Bay catching octopus for over 15 years, although the Department of Environmental Affairs told Daily Maverick that multiple stakeholders were offered the same permit option.

Nel said the line used seven years ago floated, while the lines his team currently use are weighted, sinking lines. Nel told Daily Maverick that one of the new sinking lines caught onto the old piece of line, but the whale was entangled in the older line.

In a press release issued by the City of Cape Town Marian Nieuwoudt, Mayoral Committee Member for Spatial Planning and Environment said that “the whales swim into the long ropes, and that they get a fright when this happens. They then roll over and get entangled, and eventually drown because the fishing gear is too heavy for them to reach the surface.”

As a result of the latest whale death, the City has called for Minister Barbara Creecy to issue a moratorium on the experimental licence, requesting that all gear be removed from False Bay until the “fishing gear and equipment are redesigned, tested, and proven not to pose a threat to our marine life”.

At a Fisheries stakeholder forum on 19 June Creecy addressed the contentious issue of trapping octopus in False Bay.

“What I would like to do is get some independent opinion on this so that I can understand whether we are doing everything that we can to prevent a situation where we’re endangering mammals,” Creecy said.

But environmental activists are demanding the Department provide answers as to why the process has taken so long. Swati Thiyagarajan, head of Conservation and Campaign of the Cape Town-based Seachange Project, told Daily Maverick that one of the biggest issues with the Department is a lack of transparency.

“It’s a Marine Protected Area, why did the start this project in the first place? What, and who, are they supposed to be protecting?”

Thiyagarajan was among a small group of bystanders and activists who watched Thursday’s humpback being transported from the slipway onto the back of the City’s Solid Waste Department’s trucks (see video clip above). As the juvenile whale was moved into shallow waters those present noted the presence of another whale just outside of the slipway investigating the situation.

Darryl Colembrander, City of Cape Town Head of Coastal Management and Programmes, told Daily Maverick that the missing pieces of flesh on the whale were in fact shark bites rather than wounds caused by the entanglement itself.

In a response to Daily Maverick’s request for information, Albie Modise, Chief Director of Communications for the Department of Environmental Affairs said:

“The only consistent (and therefore practically usable data) that has been received from this fishery to date has been that collected by Mr Nel’s fishing operations.

“As fisheries data relies on analyses of trends over time, the data from the first few years are not very informative, but these become more informative as one accumulates more data over time.”

The Department did not respond to a deadline requesting more information on why data was not made public. DM