While she admits protocol is not her strong point, so far so good for Naledi Pandor on the world diplomatic stage 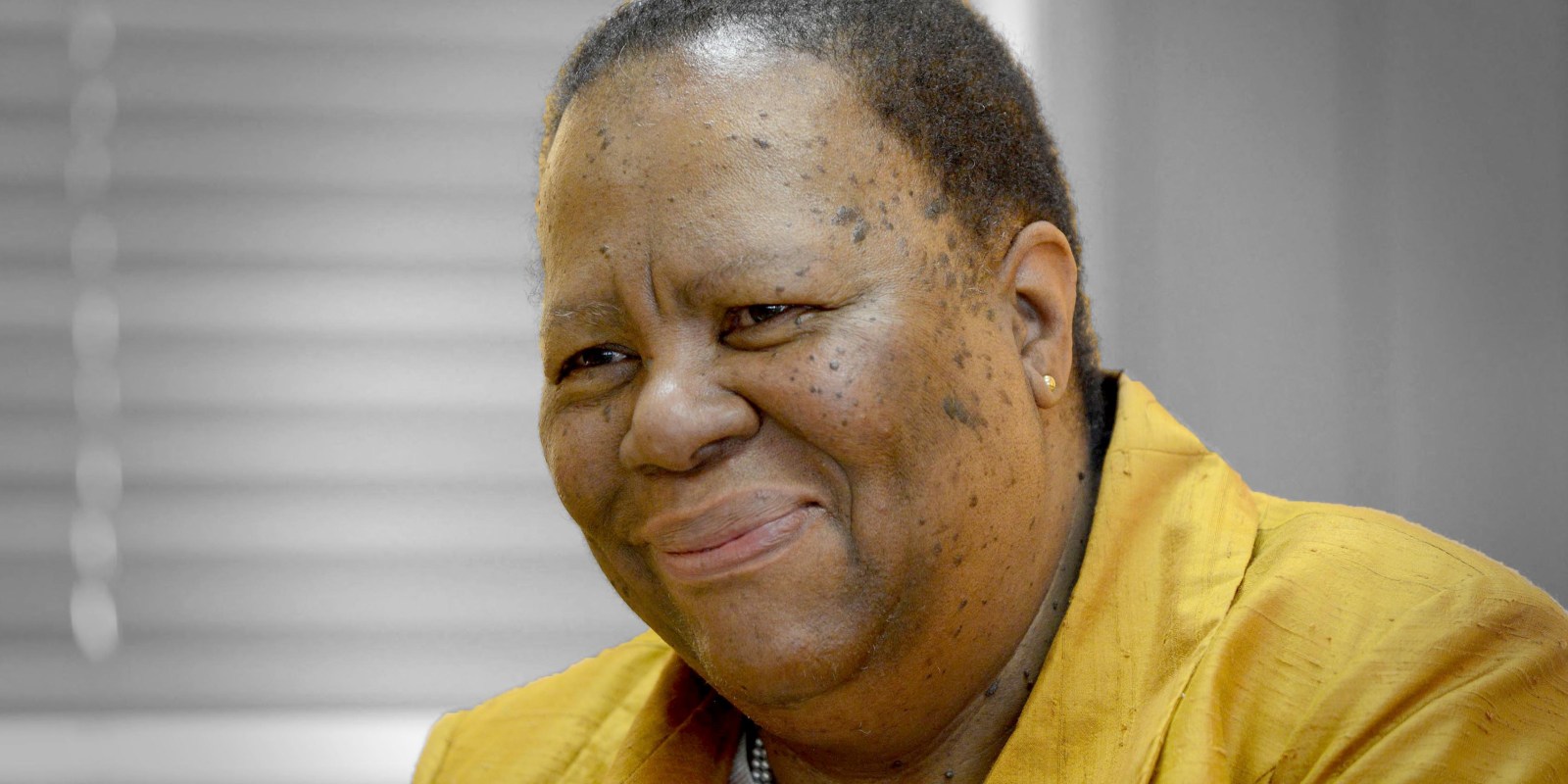 Foreign policy surprises are unlikely with newly appointed International Relations and Co-operation Minister Naledi Pandor, but her love for education looks set to shine through in her new portfolio. The big question will be whether her lack of experience in diplomacy will be a boon or bust for the challenges the country is set to face?

Naledi Pandor might be South Africa’s arch-diplomat with a roomy parliamentary office on the 17th floor in Cape Town’s Plein Street, but she still can make a journalist feel like a naughty school child facing the principal. During our interview, the day after President Cyril Ramaphosa’s State of the Nation Address, it was unnervingly clear that a thousand other urgencies were pressing on her in the new office, despite her grace in granting the interview. She was a little impatient, even irritable: a 100-day interview would have been more apt, she remarked.

“I was surprised initially, but my surprise soon ended, because we always say, wherever we are deployed, we will work,” she said about her appointment to the new portfolio earlier in June 2019.

She doesn’t say so, but must have been somewhat devastated after spending four years of hard slog and sleepless nights to get a PhD in education. The new combined ministry of higher education and science and technology seemed tailor-made for her, because she’d served in both portfolios before with distinction.

Appointing her in foreign relations with her glaring lack of experience in diplomacy seems like a test.

“I have indicated to the president that, as a rather keen debater, I did not develop the art of diplomacy,” she told the diplomatic corps on Saturday at the customary post-SONA gathering — a breakfast. “So if at any point I offend, do take it that I have always been a bit of a fighter, and that it is not my intention at all to observe protocol.” When protocol becomes a barrier to getting the work done, however, “I’m afraid I will leave protocol behind,” she added, to warm applause from the ambassadors and diplomats present. Her charm might just make up for her other deficiencies.

Many diplomats are also relieved that Lindiwe Sisulu is gone, because she proved to be difficult to deal with. Many, however, initially rejoiced at Sisulu’s appointment because Maite Nkoana-Mashabane was a less-than-capable minister. The true test would be if Pandor is still respected by diplomats a year from now.

Pandor told diplomats she would build on the work of Sisulu and some of her predecessors:

“When one thinks of luminaries such as Alfred Nzo, such as Nkosazana Dlamini Zuma, such as the erudite (former deputy minister) Aziz Pahad, one becomes nervous at this assignment.” She said her current assignment by the president was “both a privilege and a daunting challenge”.

Pandor’s deputies are also brand new to this portfolio. Candith Mashego-Dlamini was deputy minister of rural development and land reform from 2014 to 2019, and Alvin Botes was an MEC in the Northern Cape before. He appeared completely out of place when he delivered his speech at a breakfast on Saturday.

Pandor will now have to ensure that a department with representatives and offices across the world, and with many senior officials who at times pull in different directions, are kept together. She’s also saddled with South Africa’s ongoing foreign policy review and playing a role in Ramaphosa’s economic diplomacy outreach aimed at stimulating the economy and attracting more investment.

Significantly, in terms of international politics, there is also South Africa’s membership of the United Nations Security Council for 2019 and 2020, and its chairing of the African Union in 2020 — important positions that will test South Africa’s foreign policy positions in a world order that’s rapidly changing.

Our interview came in between her dealing with the fall-out over a tweet by South Africa’s ambassador to Denmark, Zindzi Mandela, and her liaising with the Chinese Embassy about a major event around trade and industry which President Cyril Ramaphosa could not attend. There was only enough time to ask about some foreign policy flashpoints.

On Israel, Pandor confirmed that government would seek to implement the ANC’s decision at its 2017 Nasrec conference of closing down its embassy there, and downgrading it to a liaison office “because of our concern that we don’t see any renewed efforts to seek a genuine settlement” from the Israel side. Sisulu had previously found herself in trouble by saying the downgrade of the embassy was in progress already, while in truth this could only happen once a decision had been taken by Cabinet.

Pandor said South Africa would not remove itself entirely from Israel and the liaison office would not be permanent.

“The minute we see genuine efforts for peace, for recognition of the rights of the people of Palestine I would run to Tuynhuys and say to the president we need to think again; because it can’t be a permanent approach of saying that we have a liaison office.”

Pandor admits to not being fully up to date as yet on South Africa’s position on Morocco and the outcomes of the Southern African Development Community solidarity conference in March with Sahrawi Arab Democratic Republic, which resolved that the AU should play a role alongside the United Nations in efforts to end Morocco’s “illegal” occupation of Western Sahara.

She confirmed, though, that a new Moroccan ambassador was on the way after 15 years of Pretoria having none. The Moroccans, however, said the ambassador still had to receive credentials from King Mohammed VI. South Africa currently only has an acting ambassador in Rabat.

There is also the issue of strained relations with Botswana, which Sisulu had to patch up in May 2019, after businesswoman Brigette Motsepe was slapped with a travel ban. She’s accused of meddling in local politics and trying to help unseat President Mokgweetsi Masisi.

Like Motsepe, Pandor had spent a part of her life at school in Botswana and said her family lived up the road from Masisi. He was friends with her brothers. The family also knew former president Ian Khama well. Khama has been behind recent efforts to challenge his successor. Pandor said she anticipated that she would “certainly play a role to ensure that (South Africa) remains a good friend to Botswana”, but she believed it was wrong to say the country was slipping into authoritarianism.

“I think they are very pleasant, calm people who have mapped out a place for themselves in the world.”

Strained relations with Rwanda go back a few more years, to even before the 2014 murder of former Rwandan intelligence chief Patrick Karegeya. Ramaphosa’s efforts to smooth relations stalled under Sisulu after revelations by her that she would meet with Rwandan opposition leaders in South Africa caused a negative and very personal reaction from Rwanda’s side.

Pandor expressed hope that she could “contribute towards normalising relations” and would look to meet her Rwandan counterpart at the July 2019 AU meeting. She said South Africa’s obligation to give asylum to political dissidents and ensuring that they were safe was “not a licence to cause us to be in a situation of hostility to a country with which we have relations on the African continent”. She said those who were organising armed resistance from South Africa “to a democratically elected government” were not welcome.

Ultimately, though, Pandor’s legacy could include some education and tech diplomacy too. She said she would look at examples of countries that have used things such as biotech, renewable energy, and leveraging the fourth industrial revolution to boost growth. She also wants to “see more South African young people get opportunities to study outside South Africa”, collaborating with higher education minister Blade Nzimande on this.

Language learning by staff would also be encouraged. She said she was “keen to encourage my own team in the department to learn other languages outside our official languages”. This included French, German, Portuguese and Arabic — efforts to boost Kiswahili skills were already underway. Pandor’s use of these languages in her greeting at the start of her speech to diplomats on Saturday was well received. So far, so good. DM