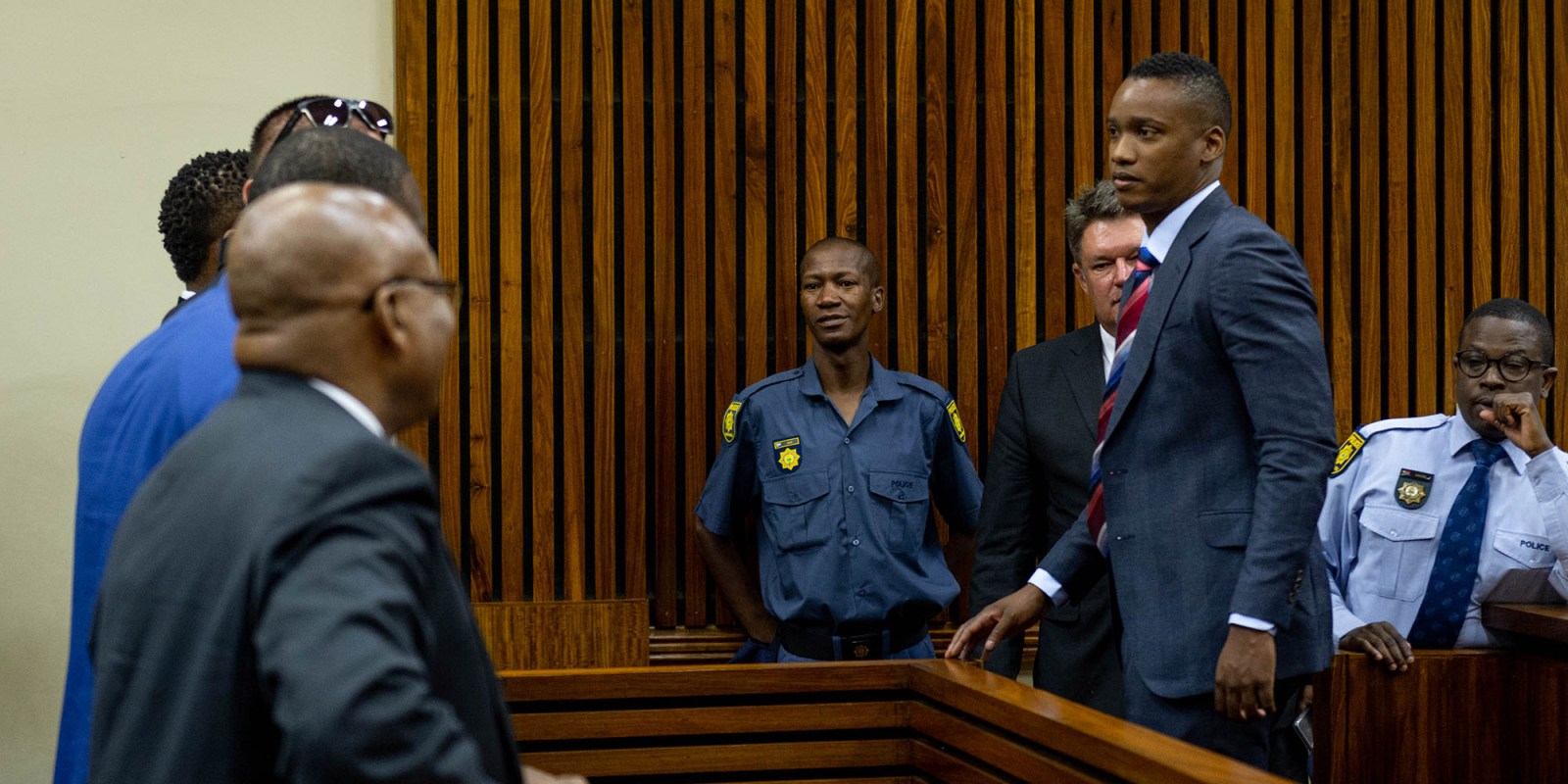 Closing arguments in the culpable homicide and reckless driving case against Duduzane Zuma, son of former president Jacob Zuma, were heard in the Randburg Magistrate’s Court on Thursday 20 June 2019.

Amid tight security, former president Jacob Zuma and his daughter Duduzile, Duduzane’s twin sister, were at the Randburg court to support their son and brother. Judgment will be handed down on 12 July 2019.

Duduzane Zuma has pleaded not guilty to a charge of culpable homicide and another of reckless and negligent driving following a car crash on Johannesburg’s M1 on 1 February 2014 in which Zimbabwean Phumzile Dube was killed when Zuma’s Porsche hit the taxi she was in.

Baba said it was important to analyse how the driver dealt with the prevailing conditions on that night. Baba said Dlamini, Zuma and witness Michael Jankelowitz all testified that it was raining heavily that day.

Baba said there was never an attempt from the State to discredit Jankelowitz as a witness.

“There were two eyewitnesses. Both could see clearly through their windows. There’s no evidence that says the rain obstructed their view,” said Baba.

In May, Jankelowitz said he had heard the accident reported on a popular radio station and called in because the radio DJ was “exaggerating” when saying Zuma’s Porsche was racing.

Baba further said two witnesses had attested to the speeding aspect in the trial.

Making reference to case law, Baba said a person must be aware of their surroundings and have a proper lookout to ensure he or she can manoeuvre if the driving conditions changed, adding that Zuma had not exercised caution.

Baba went into the issue of the Porsche’s tyres, referring to evidence from Porsche stating that a “customer (Zuma) declined new tyres”. Zuma previously testified that he had replaced his tyres.

“If new tyres were on this particular vehicle, would it have been in this condition?” asked Baba.

Baba maintained again on Thursday that the phenomenon known as aquaplaning does not occur naturally.

“It happens when tyres are worn or smooth and when brakes are suddenly harshly applied,” said Baba.

He added that the ongoing duty to inspect a vehicle or have it inspected by competent persons rested with the driver, as did taking precautions to ensure his vehicle was not a danger to others.

If a driver drove well aware that his tyres were not in proper condition, and could be a risk to others or cause an accident, such a person was negligent.

Magistrate Tebogo Thupaatlase told Baba the issue of the tyres was not really dealt with. Jacques Cronjé (Porsche dealer principal) didn’t say they advised Zuma to change his tyres, but that included in a document from the company was that the “client declined new tyres”.

“I’m not sure that your argument has support,” said Thupaatlase.

Baba said the court was guided by available expert evidence. He said the court should look at whether there was sufficient tyre tread to enable traction.

As he drew to a close, Baba asked, “Did he (Zuma) reduce his speed and drive as a prudent driver would? Zuma failed dismally in that aspect, and as such the court should convict Zuma.”

Zuma’s advocate, Mike Hellens SC, told magistrate Thupaatlase that it was extremely difficult to follow the logic of Baba’s argument, and there was no evidence that the tyres were sub-standard.

“It was never put to Zuma that he was travelling with sub-standard tyres,” said Hellens.

“Zuma was doing around 90km/h. You can only see a short distance ahead. And then, suddenly, you’re spinning. At what speed would you have not had the car spin?” asked Hellens.

Baba had no response for this.

“Everyone is sorry that this lady (Phumzile Dube) died. But as a society we organise ourselves to take due care to look out for each other. What is it that points that finger at Zuma to say he didn’t have due consideration for others?” asked Hellens.

He said the state had failed to contest this observation.

“What speed does the state say Zuma should have been doing in a vehicle that he didn’t know had a propensity to aquaplane?” Hellens asked.

“Where is the evidence that says Mr Zuma didn’t keep his vehicle under control?” Hellens asked.

“Can anyone give any evidence that the accused should have seen the puddle of water in the middle of a freeway at night?”

He said there was no evidence as to how much water was on the road.

“Nobody knows exactly what happened, but we know that aquaplaning occurred,” said Hellens.

Drawing from evidence from Porsche, Hellens said the evidence from dealer principal Cronjé was that Zuma aquaplaned between 70-80km/h. Hellens further said Zuma also didn’t know his vehicle had a propensity to aquaplane.

“One cannot also reduce speed too much on a national freeway as that too could also cause an accident. Cronjé had the same experience in the same car. He was doing a slower speed, but still aquaplaned,” said Hellens.

Hellens further said that he felt that this was the hole in the State’s case.

“What should Mr Zuma have done?” He further probed. “The State doesn’t have the answer.”

Said Hellens, “I won’t get into who Mr Zuma is. But there seems to have been a lot of pressure to prosecute him.”

The trial was postponed to 12 July 2019 when judgment will be handed down. DM