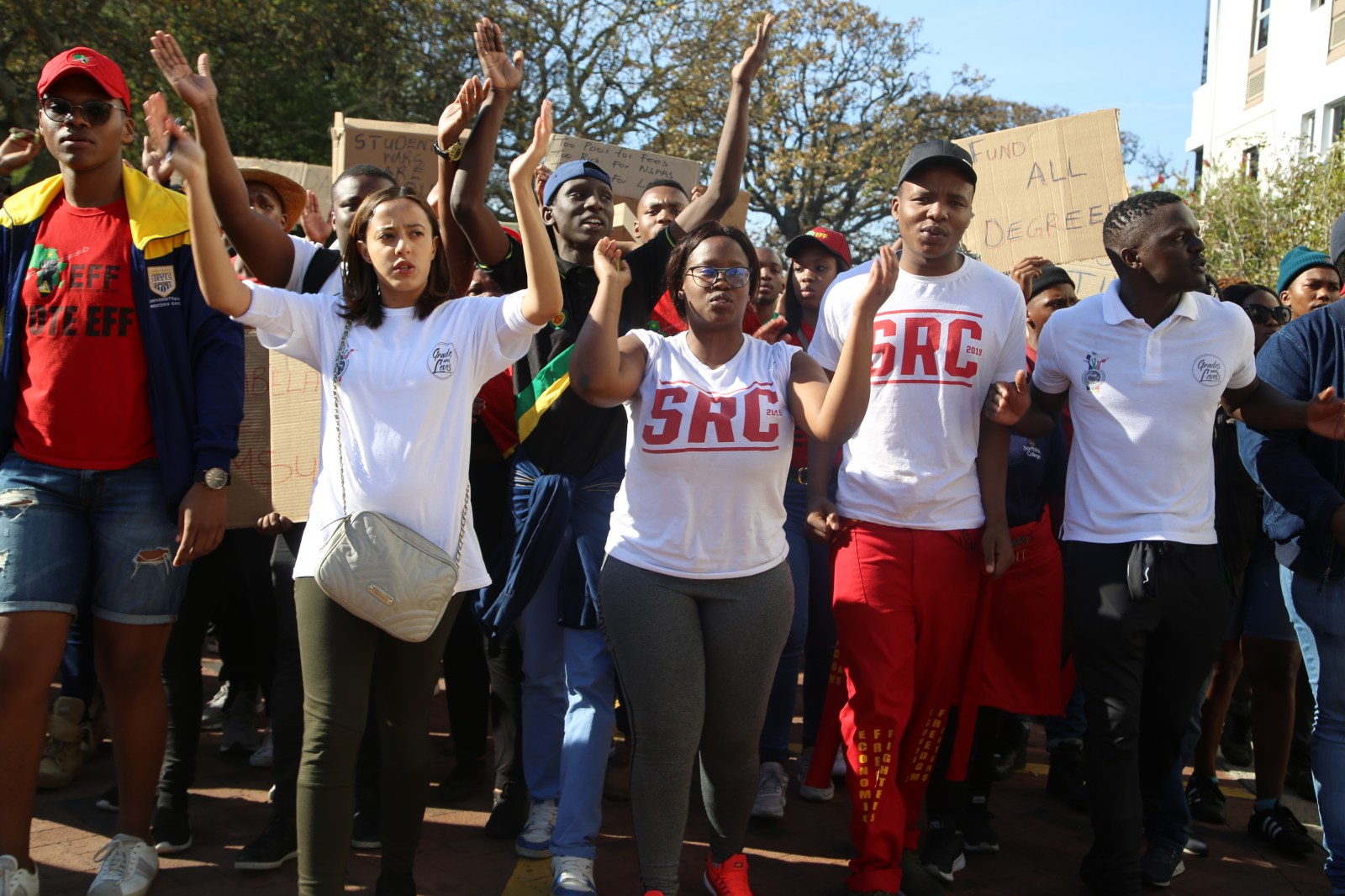 On Wednesday 19 June students marched to the National Student Financial Aid Scheme offices in Cape Town. Their demands included the cancelling of historic debt, the decentralising of the scheme’s offices and the finalisation of appeals.

“All historic debt from 2010 to date, must be written off,” said Sonwabile Dwaba, the SRC president at the University of the Free State.

This was one of the demands made to Dr Randall Carolissen, the National Student Financial Aid Scheme (NSFAS) administrator, outside the NSFAS offices in Wynberg, Cape Town on Wednesday 19 June.

Dwaba, who read out the memorandum of demands, said students who owe money to institutions are disadvantaged because they cannot graduate or receive their transcripts.

“They must access those things to apply for jobs, or be able to get into other institutions,” he said.

Students also called for the decentralisation of NSFAS and for regional offices to be opened.

“NSFAS is inaccessible to students, particularly students who are not from the Western Cape,” Dwaba read.

Fasiha Hassan, a former Wits student and the deputy president of SAUS, told Daily Maverick the centralisation of NSFAS had made the system “inefficient”.

“[That’s why] we want formal regional offices for NSFAS all over the country,” said Hassan.

She also echoed another demand made in the memorandum: the finalisation of NSFAS appeals.

“A lot of people have not received funding and don’t know where they stand with NSFAS or the universities,” she said.

At the beginning of the 2019 academic year, a number of protests broke out at institutions of higher learning, where students called for a national shutdown of universities over a lack of accommodation and instances where students had not received their NSFAS allowances.

Carolissen, upon receiving the demands, acknowledged that students were disadvantaged because of “bureaucratic bungles”. However, he said often-raised issues, such as accommodation, funding the missing middle, funding postgraduate students and funding students who are currently excluded, are “policy issues” over which NSFAS has no control.

“We are here to administer those policies,” Carolissen said.

He assured students the memorandum would be taken to the department of higher education and Treasury.

Simthandile “Azania” Thyali, the SRC president of UWC, reminded students that the march took place a day before the State of the Nation Address.

“Your ministers and MECs are going to be wearing fancy dresses and fancy suits, but also at the same time, they are not going to be issuing a budget that will get rid of all the challenges that students are experiencing.”

Thyali said NSFAS was the “only source of income for poor students in universities”.

Demands for NSFAS were “not negation of free education, this is a means to an end. At the end of the day, we still want to see free education implemented.” DM