Meet the activists who are energised to avert climate catastrophe 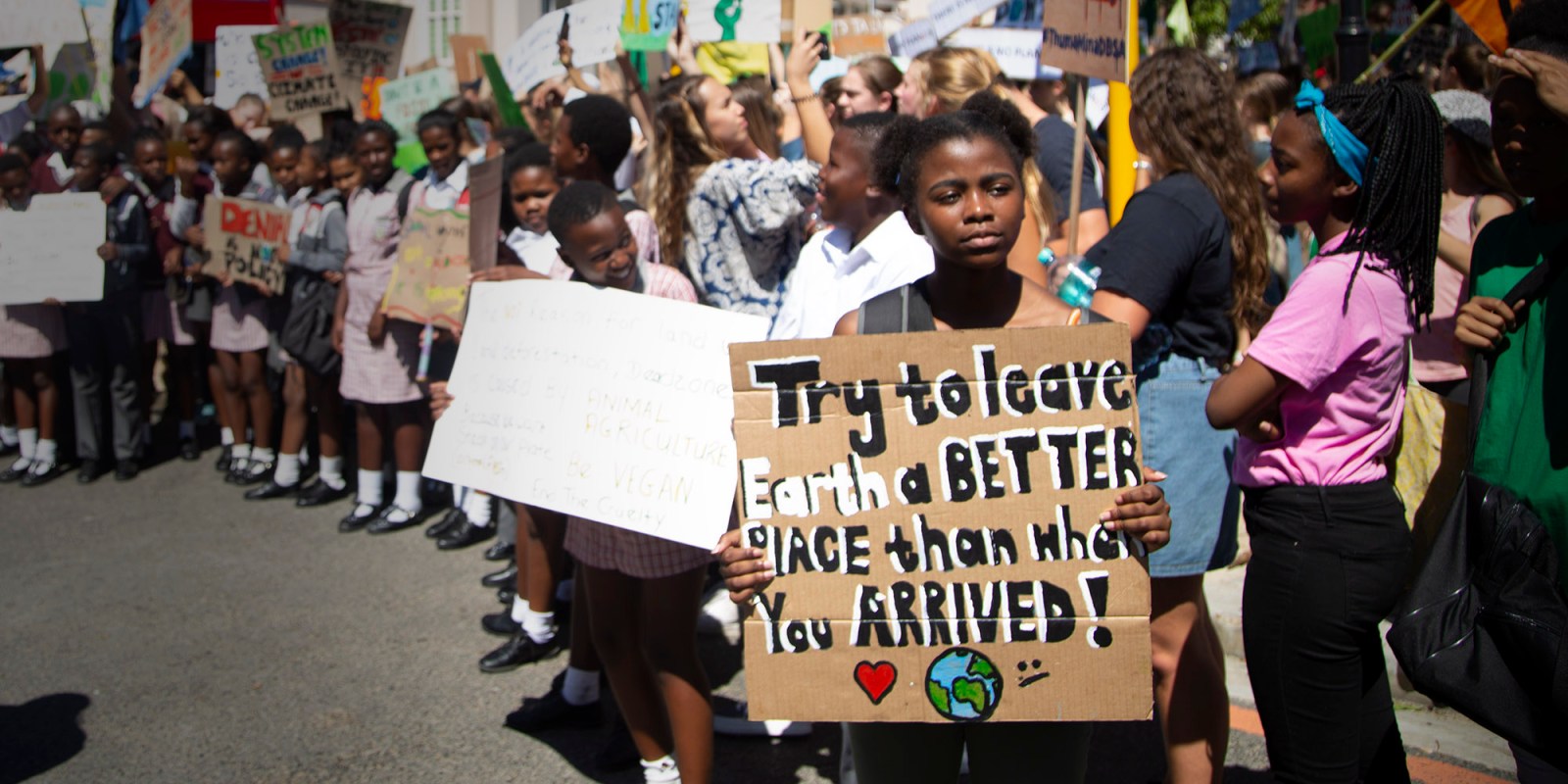 11-year-old environmental activist Yola Mgogwana holds a sign saying “try to leave earth a better place than when you arrived’ at the Fridays For Future and Extinction Rebellion protest outside Parliament on March 15. Photo: Tessa Knight

Young people around the world have taken to the streets to fight the climate crisis, from Sweden to South Africa. Daily Maverick sat down with Ruby Sampson, one of the founders of African Climate Alliance, and 11-year-old climate activist Yola Mgogwana, to talk about how youth are leading the charge against global heating.

Ruby Sampson, who is currently in Matric in Cape Town, has faced death threats, slander and cyber-bullying since starting African Climate Alliance (ACA) in March 2019. Despite this, the 17-year-old remains passionate about her cause: fighting climate injustices. Her organisation, inspired by the Fridays For Future campaign started by climate activist Greta Thunberg, aims to educate both young and old about climate inaction.

Ruby was introduced to the catastrophic impact of climate disaster six years ago when her family travelled around the African continent in a truck that used no petrol or diesel. Instead, the Sampson family used recycled cooking oil from hotel kitchens to fuel their travels.

“I witnessed first-hand the impact of climate change, in ways that I never saw back home. In Namibia, I saw cattle on the brink of death. The drought was so bad the herdsmen fed them cardboard soaked in brine to trick their stomachs into feeling full,” Ruby told Daily Maverick in an interview.

Ruby is accompanied by Yola Mgogwana, an 11-year-old learner from Khayelitsha. She was introduced to climate activism through the Earthchild Project, an NPO working out of Lavender Hill and Khayelitsha. Yola was drawn to the project’s environmental aspect and says she wants people to stop polluting the air she has to breathe.

Yola was at the front of Cape Town’s first youth-led climate based protest action back in March, where nearly 2,000 learners protested against climate inaction outside Parliament.

ACA was born after that original protest when Ruby decided to move away from what she calls “the negativity and drama”. Just months after starting African Climate Alliance (ACA), Ruby’s youth wing has over 260 members in seven different African countries.

“I went online and recruited people. We want to unify small environmental groups across Africa under one big ACA banner.”

“The WhatsApp group is crazy, I get so many messages,” Ruby said, laughing.

To date, African Climate Alliance’s youth wing has the most members of the organisation, although the group does have an adult wing and a pan-African wing.

“We have way more young people on board than adults, which is super cool. We encourage them to start their own environmental groups in their countries.”

But Ruby knows first hand how important it is to have adults involved in the environmental movement.

“They act like a buffering system, because, and I’ve learned this the hard way, people aren’t always nice, even to kids.”

Ruby is not the only young environmental activist that has experienced bullying from people within the community, particularly from the older generation. She explained that the Fridays For Future India group has experienced similar issues, and that “it isn’t uncommon”.

Although ACA is associated with Extinction Rebellion and Fridays For Future, Ruby emphasised that African Climate Alliance is separate from the two.

“We are a non-violent organisation, and we acknowledge that a lot of kids can’t actually skip school every Friday.” ACA works closely with both primary and secondary schools, and Ruby told Daily Maverick that the group is aligned with 37 schools in Cape Town already.

Yola, who is currently in grade 5, told Daily Maverick that: “It’s cool to be interested in climate change.” The young environmental activist has started changing minds in her community already and gave a presentation at her school on the impact of global heating.

“It was good,” she said, of the presentation. “My school wants me to do it every term.”

But for Ruby, being an environmental warrior has not made her the coolest kid on the block. The matriculant told Daily Maverick that discussing the climate crisis is “very depressing”, and sometimes her friends and schoolmates get tired of the topic.

When asked how she gives people hope and inspires her friends over a topic that often makes people feel hopeless, Ruby said she tries to remain positive.

“I do believe we have a chance, definitely. I think a lot of people expect that if we fight now for renewable energy we’ll go back to the way things were, there’s this idea that everything will go back to big fancy cars and dishwashers. There is hope, but not for that. So I’m trying to give people a different type of hope, a hope for a different future.”

And as Yola so aptly puts it, “everyone needs to stop destroying the world”. DM

ACA, in conjunction with Extinction Rebellion and Fridays For Future, has organised a youth march on Friday 14 June, the last day of term for most school learners. The learners will be marching from Parliament to the Grand Parade in Cape Town, to hand over a list of demands to government officials.