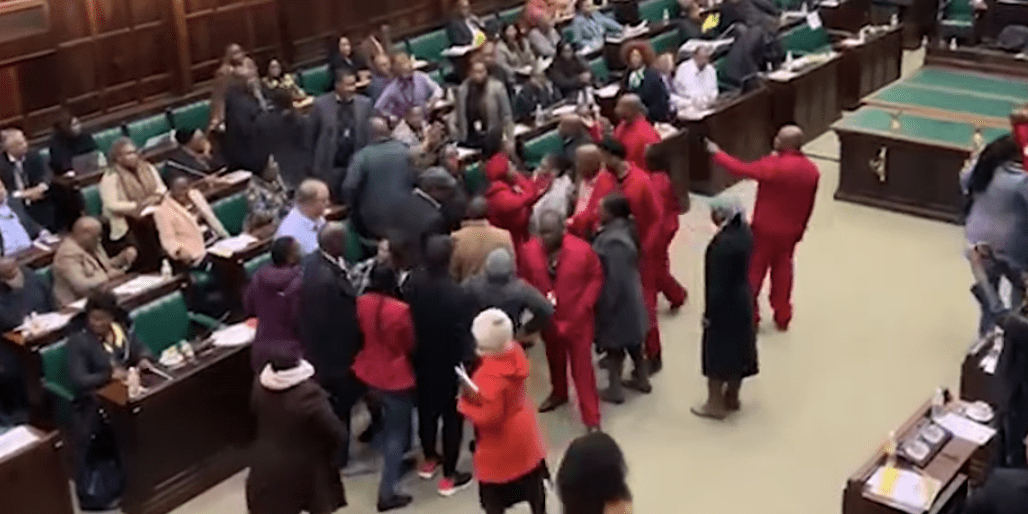 ANC and EFF MPs confront one another in Parliament on 12 June 2019. (Screenshot: Youtube/News24)

ANC MPs expected to hear at caucus who would chair what committee, but that meeting was cancelled at the last minute. As it turned out later in the day, ANC secretary-general Ace Magashule was camping out in the chief whip’s boardroom to ‘consult’. Thursday 13 June 2019 was a strange day at the national legislature, filled with delay, skinder and spin.

ANC secretary-general Ace Magashule emerged from the chief whip’s boardroom suite of offices just before 4pm, done with the day’s consulting. He was greeted by parliamentary and party staff – many respectfully bowed when they shook his hand – as he made his way out to a luxury sedan under the watchful eye of what appeared to be a protector.

“We are still consulting. We are finalising. Definitely, we will announce next week,” Magashule told Daily Maverick in response to questions when the chairpersons of committees, house chairpersons and so-called “chair of chairs”, or chairperson of committee chairpersons, would be announced.

A special ANC parliamentary caucus is now pencilled in for Tuesday 18 June, when the appointments will be announced for implementation at the first committee meeting, possibly as late as July after the State of the National Address (Sona) on 20 June and the subsequent debate.

As the largest party in Parliament, the ANC gets to chair all committees, and with the most MPs on committees, also gets to elect its choices. The one exception is the parliamentary watchdog over public spending, the Standing Committee on Public Accounts (Scopa) that traditionally is chaired by an opposition MP.

But it’s an indication of the fierce contest behind the scenes that five weeks after the 8 May 2019 election results were officially declared, and a week to Sona on 20 June, these key parliamentary positions have not been filled.

The ANC is cutting it fine.

Against this background the skinder on the parliamentary grapevine hit top gear. According to some, the ANC MPs fingered in State Capture and #GuptaLeaks such as one-time communications minister Faith Muthambi and ex-mineral resources minister Mosebenzi Zwane are headed for committee chairpersons’ posts on the back of the radical economic transformation (RET) grouping headed by Magashule.

Others like Bongani Bongo, the backbencher who former president Jacob Zuma appointed as state security minister and Sifiso Buthelezi, who Zuma had appointed deputy finance minister, are also said to be tipped for committee chairpersons.

Some of the skinder, however, seems to be a step too far: speculation the EFF would be the opposition party to chair Scopa was rejected at the highest level.

Approached for comment when she emerged from the ANC chief whip offices, ANC MP Tandi Mahambehlala dismissed rumours she’d be the next chair of chairs. It was the position turned down by former Cabinet minister Nomvula Mokonyane, a firm supporter of RET and, as it was argued, Magashule’s point person in Parliament in a key position that determines resources, oversight initiatives and trips and scheduling for committees.

“I’m just an ordinary MP,” said Mahambehlala as she walked with Magashule to his car, waiting to take him to the airport. The ANC secretary-general is expected back at Parliament on Tuesday for the special caucus; traditionally the secretary-general announces appointments like committee chairpersons, house chairpersons and chief whips.

Some progress had been made on positions related to Parliament, but not dependent on the ANC: Gerhard Koornhof was officially named, again, as parliamentary counsellor of President Cyril Ramaphosa, and Deputy President David “DD” Mabuza, as has been the tradition since 1994, again is appointed leader of government business, or the liaison between the executive and national legislature.

But on Thursday June 13, three ANC MPs privately spoke of their surprise, and confusion, over the 11th-hour cancellation of their parliamentary caucus. It seems it wasn’t made clear that ANC Chief Whip Pemmy Majodina called off the caucus, as Daily Maverick was reliably informed, and that the reason was there were no announcements to be made.

At a Sona state-of-readiness briefing, National Council of Provinces (NCOP) chairperson Amos Masondo confirmed consultations were still under way, but were expected to be finalised soon.

“We are confident the committees and structures will be in place before Sona or soon thereafter. There really is no reason to worry.”

The factional shenanigans around the parliamentary committee and House chairpersons positions are disconcerting. These positions are powerful as chairpersons direct committees’ legislative and oversight work. The impact of the chairpersons’ role is apparent in how four committees responded to former House Chairperson for Committees Cedric Frolick’s direction to probe #GuptaLeaks claims in June 2017.

The public enterprises committee pursued the brief – resulting in the well-regarded and decisive parliamentary inquiry into Eskom State Capture. Its hard-hitting report – ministers were described as negligent and points were raised over problematic board appointments – alongside extensive testimony by ministers, Eskom officials and board members, is part of the documentation now before the Zondo State Capture Commission.

The transport committee side-stepped the directive, as did mineral resources. It was only after a change of chairperson from a known supporter of ex-president Jacob Zuma to a more neutral ANC MP that the home affairs committee pursued a probe into the role of then home affairs minister Malusi Gigaba in the Gupta naturalisation and other debacles related to the politically connected family.

It is perhaps that which is at the nub of State Capture Commission chairperson Deputy Chief Justice Raymond Zondo’s decision to establish a special task team to look into how Parliament conducted its constitutional oversight duties.

It could well be that those over whom parliamentary committees are supposed to exercise oversight know that nothing will happen to them.

“And they don’t care. They don’t fear. They don’t think there will be consequences if they have no explanation for not doing their job. Maybe that’s part of the problem,” said Zondo.

He added: “I already have heard evidence of some witnesses, who were in Parliament at certain stages, [saying] ‘When I was raising this, I was told to take it easy.’ We need to look at these things.”

Aside from the factional jockeying over posts, the disappearance of hundreds of leather-bound copies of the Constitution that left some MPs without the document, according to Eyewitness News, and the fracas at Wednesday June 12’s induction session shed some light on how National Assembly Speaker Thandi Modise wants to run the national legislature.

For many it was a breath of fresh air, albeit delivered in a disciplinarian, schoolmarm tone.

“You must be ashamed of yourselves… I am ashamed if you are not,” Modise told the meeting, according to a sound recording. “But asseblief man, you are all adults. Parliament is not a place for children and juveniles. We must be in control of our emotions and all of you without exception, you are wrong.”

If MPs did not behave, how would Parliament play its role in leading South Africa?

“That sometimes we are too scared to take on issues on behalf of the people and put the executive to account is a weakness of the backbencher and not of the system.”

And that, at the end of a parliamentary week filled with skinder, speculation and stalling, is a caution that should be taken to heart – across the body politic. DM