The road was bumpy, but South Africa is going to the Olympics 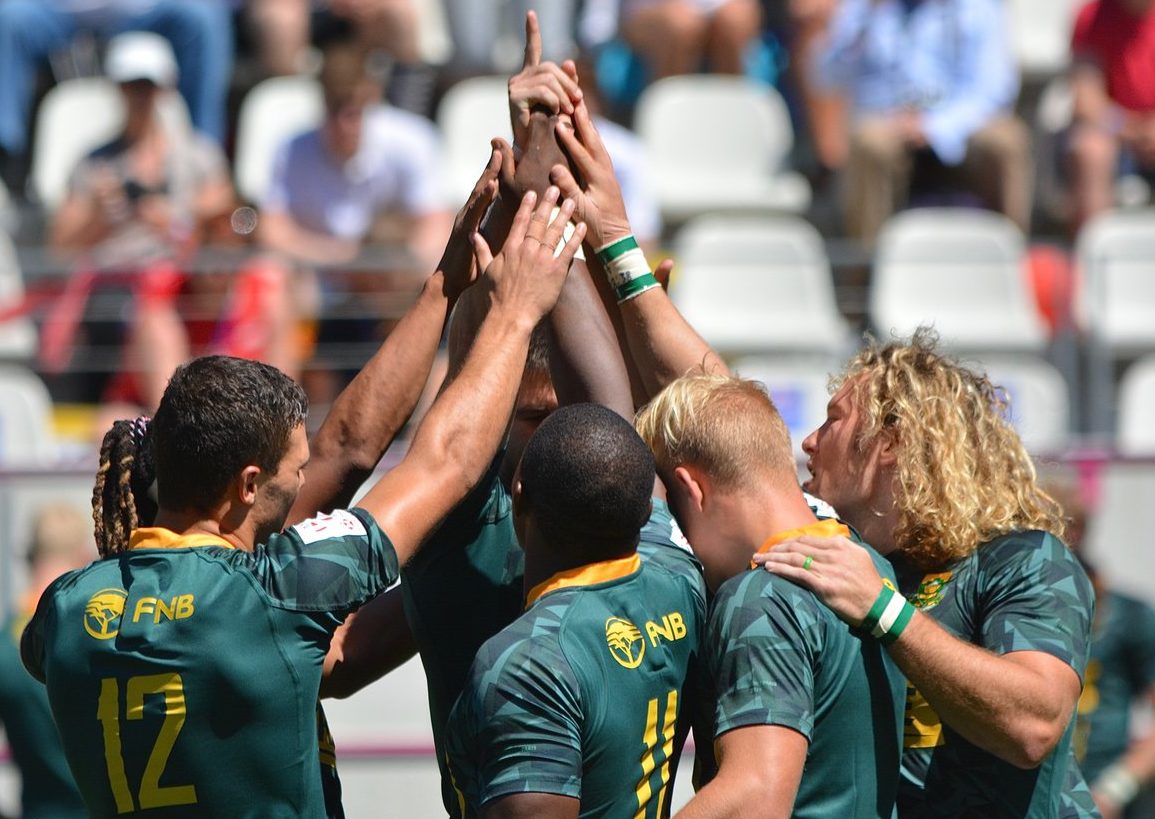 The Blitzboks, seen here against against the United States on 2 June, 2019, won the Vancouver leg of the HSBC World Sevens Series with a 38-5 win over Kenya in the final on 20 September 2021. (Photo: Twitter @Blitzboks. )

The HSBC Rugby Sevens series concluded on Sunday in Paris, and Fiji won both the tournament and the Sevens Series as a whole. South Africa fell to New Zealand in the semifinals but took third place, and the Blitzboks booked their spot to the 2020 Olympics by finishing fourth in the Series.

South Africa is going to the Olympics, and though you could certainly come away with a more negative reaction after the HSBC Rugby Sevens series wrapped up, that’s the only thing that matters.

The final two matches of the Paris Sevens on Sunday pretty much told the story of the Blitzboks’ campaign as a whole – a disappointing blowout loss to New Zealand where South Africa simply looked out of sorts, followed by a convincing win against the United States (who get some slack because they were coming off a loss in the most important single match of the entire series, when they fell to Fiji in a match-up that essentially determined the winner of the series).

Still, the Blitzboks finished third in the Paris tournament and fourth overall, enough to book them one of four automatic qualifying spots in the Olympics. But they weren’t seriously challenged down the stretch after England imploded over the final events of the series and finished 34 points back of South Africa.

Coach Neil Powell had to deal with injuries and a squad that seemed to change every time they stepped on the field, but there’s no escaping the fact that South Africa had finished in the top two of every Sevens Series since 2012 and had won the Series for two straight years. The expectation is to win, and so a fourth-place finish is not exactly something to write home about.

And yet, when you think about it closer, people will remember the Olympics more than any Sevens Series. The format of Rugby Sevens makes it inherently open to randomness, so once you’re in the tournament, anything can happen.

And it’s not like there aren’t a litany of positives to take away from the series. The constant roster shuffling allowed a number of Blitzbok players to make their team debuts or earn more playing time than they had in the past, and that will give Powell lots of options a year from now, when he starts to put South Africa’s Olympic squad together.

He’ll probably look no further than 19-year-old Muller du Plessis, who played only sporadically throughout the Series because of a number of injuries. In Paris, though, he was finally healthy, and he proved it in a major way, finishing tied for fourth among all players with six tries on the weekend. Another year of development for JC Pretorius certainly won’t hurt either, and both players should be ready to contribute in Japan.

The Blitzboks also need to figure out what their identity is, and they could start by looking at the teams above them. Fiji dominates with their brute strength, while the US relies on game-breaking speed from Carlin Isles and Perry Baker to find their way around opposing teams.

It’s tough to establish an identity without a consistent unit, but even so, South Africa was somewhat of a chameleon this season, and that might be a good thing. The Blitzboks can play the strength game with Werner Kok, but they can also stretch teams out with Ryan Oosthuizen and Selvyn Davids (who didn’t play in Paris). Going forward, Powell needs to make personnel decisions with his plan for the team’s identity in mind.

Even though South Africa struggled through long, disappointing stretches throughout the Sevens Series, they still managed to earn two first-place finishes and were one of only four teams to win an event. You can bet those four teams – Fiji, US, New Zealand and South Africa – will be the four teams to watch out for going forward.

The Blitzboks will be keen to remember one of the most dramatic comebacks of the entire series when they erased a 19-point halftime deficit to stun Fiji in the Singapore Sevens final on 14 April. You can bet Powell and his team will use that to remind themselves that they can outplay anyone at any time if they operate at their best.

The Rugby Sevens landscape also changed dramatically. The All Blacks have long been a rugby powerhouse and Fiji won the Olympic gold medal in 2016, but the Eagles’ emergence was the main story line of the year. Isles, Baker and Madison Hughes have built a very solid foundation, and the Blitzboks and the rest of the world will have to look out for them in 2020.

A lot can happen between now and the time the teams head to Tokyo, but South Africa did what it needed to do, even if it wasn’t always pretty. The teams are starting to congregate on the starting line, and South Africa is there. When the gun goes off, there’s no reason the Blitzboks can’t be in front. DM