After comeback for the ages, the Blitzboks still have work to do 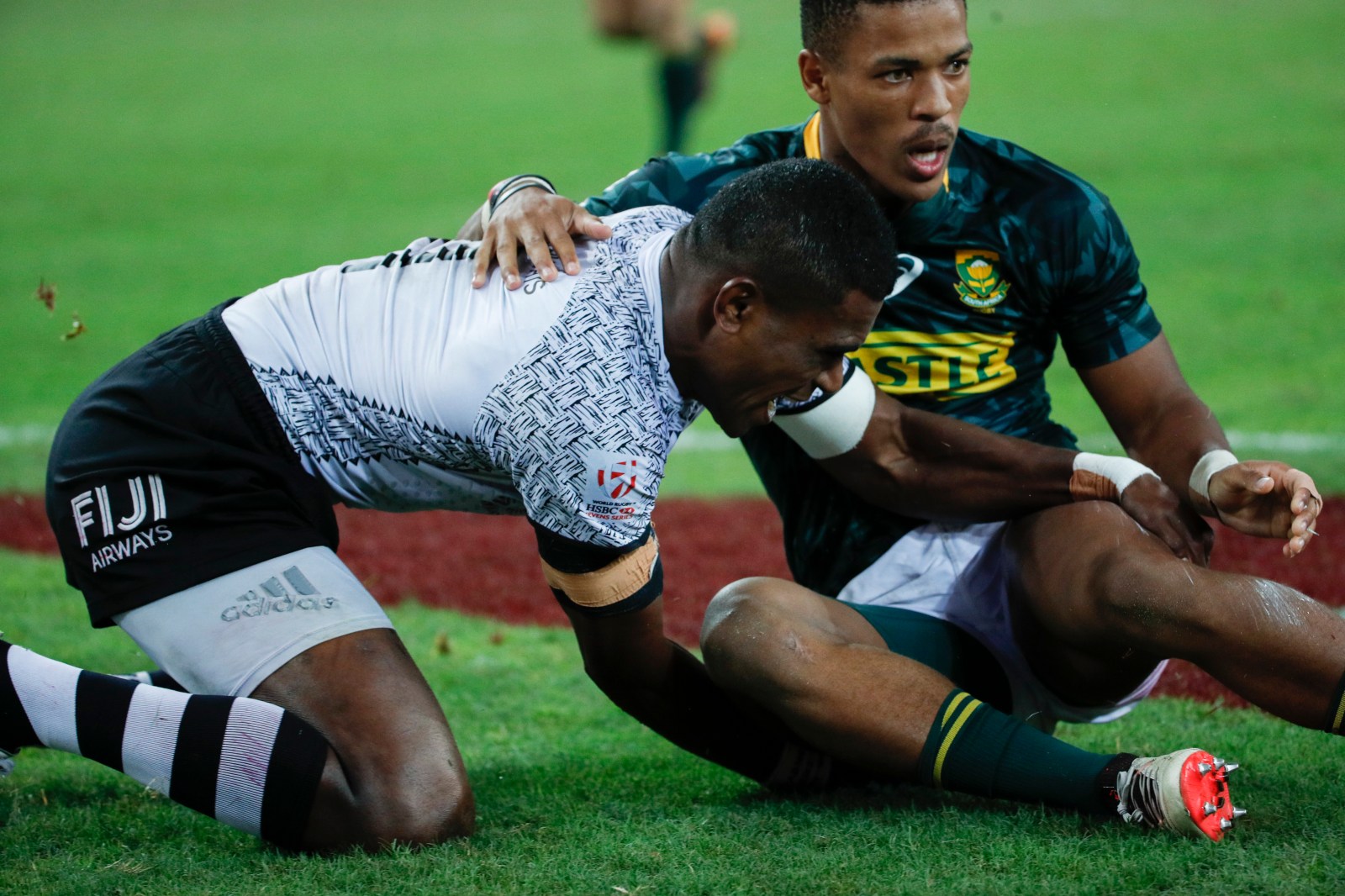 Aminiasi Tuimaba (L) of Fiji scores a try while in action against Angelo Davids (R) of South Africa during the final match of the HSBC 7s World Rugby Series tournament held at the in Singapore 14 April 2019. South Africa won the match 20-19. EPA/WALLACE WOON

South Africa’s Rugby Sevens team entered the Singapore Sevens tournament hanging on to fourth place in the series, just nine points ahead of fifth-placed England. The Blitzboks made it all the way to the final, where they overcame a 19-0 halftime deficit with a comeback for the ages and are now likely to earn an automatic qualifying spot with two stops left in the series.

Down by a seemingly insurmountable 19-point deficit after seven minutes, South Africa could’ve settled for a second-place finish at the Singapore Sevens on Sunday 14 April. The Blitzboks had already beaten the first-placed United States Eagles to make the final on Sunday and with only two more series events, were close to securing a berth in the 2020 Olympic Games, where the sport will be contested for just the second time.

“We basically said to each other, ‘we’re still in it, if we can get the first points on the board in the second half. We still have a chance to pull this one through’,” coach Neil Powell said. “These youngsters, they hang on to every single word that you tell them and well done to them. They’re very gutsy, and they showed it out there in the second half.”

The Blitzboks came as close as you could possibly come to executing a perfect seven-minute stretch out of the break, and stunned Fiji to win for the second time in three series stops. The Singapore result represented what South Africa can be when it plays its best, but that hasn’t always happened throughout the series.

Inconsistency has been a major problem for the Blitzboks, who’ve battled injuries to key players throughout the series. South Africa has finished in the top four in only half of the eight events so far, even though two of those have ended with wins. Juxtapose that with the US, which only has one win in the series, but has never finished outside the top four.

In a meta-sense, the series has to be somewhat of a disappointment for the Blitzboks, who won in 2017 and 2018 and finished second in both 2015 and 2016. With two events to go, it’s unlikely they’ll move much higher than their current position. The All Blacks of New Zealand sit nine points ahead in third place, while Fiji and the US have opened a gap in the front. Fiji has 142 points, while Carlin Isles and the surging Eagles sit at the top with 145.

Still, last weekend’s result puts South Africa 14 points ahead of fifth-placed England. The top four teams from the series will earn automatic qualification to the 2020 Games, so keeping hold of the slot is extremely important.

If the Blitzboks fall out of the top four, they’ll still have multiple chances to be part of the 12-team field in Tokyo. One team will advance from the Africa Sevens tournament in July, and if they don’t qualify there, they could have one final chance in a final qualification tournament in June 2020.

Not qualifying for the Olympics would be a catastrophic failure, but South Africa is in good shape for now. The goal for the next two tournaments should be to focus on finding consistency as Powell mixes young players with more established veterans.

Two of those young players were instrumental in the Singapore comeback. Kurt-Lee Arendse scored the first try for the Blitzboks and Angelo Davids — in just his second tournament with the team — followed shortly thereafter with a try of his own.

That might be the most encouraging part of the comeback on April 14. South Africa has enough talent to compete with anyone in the world, and Powell has options moving forward as the Blitzboks — most likely — turn toward Olympic preparation later in 2018.

The Blitzboks will have some time to rest before the next stop in the series, which starts on 25 May in London. They are in a pool with eighth-placed Argentina, 12th-placed Canada and 15th-placed Japan. That event will be followed by the final tournament of the series the next weekend in Paris.

South Africa will not win the Sevens Series, and that should be a letdown. But qualification for the Olympics is the most important task at hand, and barring a collapse, the Blitzboks should book their ticket to Tokyo in early June. Then the pressure to build off their 3rd-placed finish in 2016 will start to mount. DM