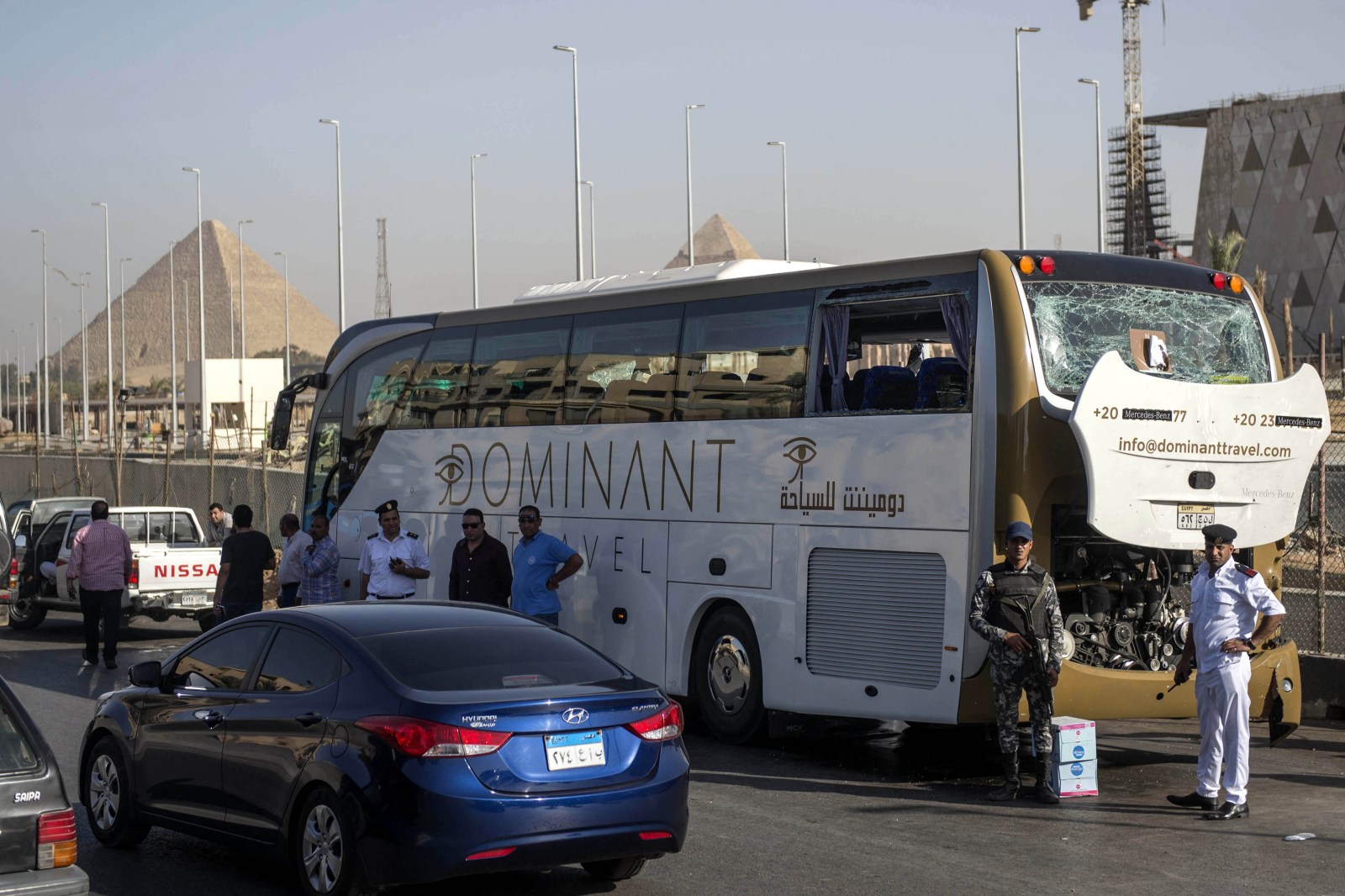 Security officials stand next to a tourists' bus that was targeted by an explosive device near Grand Egyptian Museum in Giza, Egypt, 19 May 2019. According to reports, 16 people, mostly tourists, were injured when an explosive device went off as the bus was driving near the fence of the museum. EPA-EFE/MOHAMED HOSSAM

A tour bus thought to be carrying SA tourists was hit by a roadside bomb explosion at the Grand Egyptian Museum, close to the Giza pyramid complex near Cairo on Sunday.

South African tourists are believed to have been injured in an explosion targeting a tour bus that wounded at least 12 people in Egypt on Sunday, near a new museum being built close to the Giza pyramids, two security sources said.

A third security source said the bus was carrying 25 South African tourists from the airport to the pyramids area, and that four Egyptians in a nearby car were injured by broken glass.

There were no reports of any deaths.

“Initial media reports suggest that South Africans might be among the injured,” International Relations spokesperson Ndivhuwo Mabaya said in a short statement on Sunday.

“The 24-hour operational centre has been activated and South Africa’s ambassador, Vusi Mavimbela, and his team in Egypt are engaging with authorities, including visiting hospitals to verify the information and report back to Pretoria,” Mabaya said.

Security and judicial sources said a rudimentary device containing nails and pieces of metal had been detonated remotely on the perimeter of the Grand Egyptian Museum, not far from the site of a roadside blast that hit another tourist bus in December.

Pictures posted on social media showed at least one person covered in blood and a bus with some of its windows blown out or shattered, and debris in the road next to a low wall with a hole in it.

One witness told Reuters he heard a “very loud explosion” while sitting in traffic.

Sunday’s blast came as Egypt’s vital tourism industry showed signs of recovery after years in the doldrums because of the political turmoil and violence that followed a 2011 uprising that toppled former leader Hosni Mubarak.

It was the second such incident involving foreign tourists near the famed pyramids in less than six months.

In December, three Vietnamese tourists and an Egyptian guide were killed when a roadside bomb hit a tour bus less than 4km from the Giza landmarks.

Timothy Kaldas, a political analyst and non-resident fellow at US-based The Tahrir Institute for Middle East Policy, said it was “too early to know” who was responsible for Sunday’s blast.

“The last time we had an attack on a tourist bus that had been leaving the pyramids in December no one ended up claiming responsibility,” Kaldas told Al Jazeera. DM